The Beaches of Kinneret

Lake Kinneret is vital to Israel. It provides much of the country’s fresh water supply; its shores have been the scene of many events from ancient Israel’s history (including those portrayed in the Torah and the Bible). In addition, it is one of the country’s favorite vacation spots.

The environmental situation of the lake is constantly monitored. There are excellent conditions for swimming and camping. The beaches of Kinneret have almost any water attractions and water parks. A standard set of amenities for most beaches: awnings and umbrellas, picnic tables, space for tents and parking. Official beaches differ only in the presence of lifeguards.

is considered unofficial. It is located at the foot of the Golan Heights. There are many grassy and shady places. It is open to everyone, but it is mostly visited by religious Israelis. Nearby is the famous hotel “Kinor”. It is possible to pitch tents and make use of the facilities.

Easy access and location: Located on the east side of the kebir and accessible by road 92 from Ramot junction.

This is one of the official beaches. There are lifeguards on duty. Bathing is separate, but there are no women’s and men’s days. The beach can be visited at night and, as well as on “Ekev”. There’s room for a barbecue, tents and picnic tables. Water sources and basic facilities are available. Location: adjacent to Ekev beach.

is also not an official beach. You will not find lifeguards here. The beach is considered one of the most beautiful. There is a real grove, as well as facilities, places for tents and picnics, a small store. There is no access to the power grid for tourists. The beach is host to an annual gathering of Israeli bard singers, concerts, and song contests. How to get there? The beach is adjacent to Kiner beach.

READ
The cradle of the Cuban revolution, a must-see city in Cuba.

Only part of this beach is under the supervision of lifeguards. Nearby are the “Golan” beach and the “Luna Gal” water park. All the standard equipment is provided. There is a separate enclosed area for camping. Here you can rent a wooden house with all conveniences and big tents. Tourists can use mini-market and restaurant. How to get there? Highway 92, two kilometers after the intersection of Kursi.

– Golan beach is official and includes the amusement park “Luna Gal”. Here, perhaps, is the largest selection of attractions for tourists. How to get there? Take highway 92, north of Ein Gev and the intersection of Kursi.

– n this unofficial beach has facilities, but the showers are without hot water. There is no charge for access to the beach. Directions: one kilometer north of the intersection of Kursi .

– This unofficial beach is one of the protected areas. There is no charge for entry or parking. It is only possible to pitch your tent north of the Semek River. The rest of the area is a closed nature reserve. There are no facilities at the site. There is a comfortable small hotel nearby. From here you can follow the signs to Tz’alon, between Ramot and Kursi. Be careful! There is a steep descent.

In fact, they are two beaches, they have a common entrance. They are classified as official and are serviced by the lifeguard service. The beaches have a lot of shade and grassy areas, but the area itself and the bottom are stony. The beach “Levanon” concentrates young people. There are places for tents and picnics, and there is night lighting. The showers don’t have hot water, the toilets are handicapped accessible, too. Getting there: Take the road between Beit Shean and Tzemach, turn east at the Tzemach junction and then left north to Ein Gev and drive about 3 km.

– That informal beach is great for camping, there are lights for night walks, toilets (including for people with disabilities). To get here you can take highway 92, drive two kilometers from Ein Gev to the north.

– A very beautiful beach (unofficial) stands out for its broad avenue of eucalyptus trees. You can put your tents by the water. Directions: north of Ein Gev, follow the signs to the country road to the beach.

– A beautiful sandy beach, no lifeguards, but all the necessary amenities, including night lighting.

– The official beach, one of the largest and most equipped. There are rides, a swimming pool and a whole amusement park. Festivals and concerts are often held on the beach. There is a restaurant that provides catering . The list of amenities has everything you need for a comfortable and safe holiday in the lap of nature. The beach is located on Highway 90, near the intersection of Tzemach .

– is located at the confluence of the Jordan River and the Kinneret. The beach has no official status. Here is a full range of amenities, in addition there is night lighting and the possibility to connect to the electricity. In addition to those listed are very popular among tourists beaches: 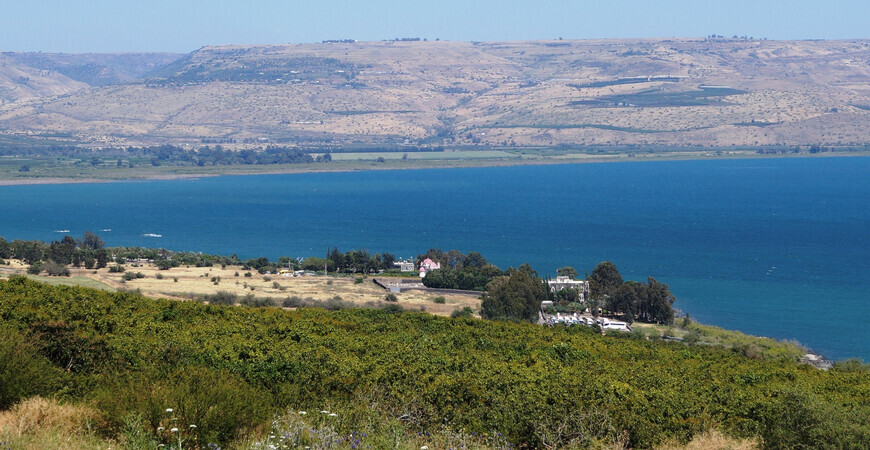 Lake Tiberias in Israel, also known as the Sea of Galilee, Lake Gennesaret or Lake Kinneret, is located in the north-eastern part of the country, near the city of Tiberias.

So many names the body of water acquired because of its location. Lake Tiberias received its present name after the city of Tiberias (now Tiberias) was founded on its western shore in the first century AD. The name “Sea of Galilee” came from the Bible – so in the holy book called the body of water that washes the eastern shore of Galilee. From ancient times came other names as well. It is believed that Kineret and Genisaret were called the Galilean city that existed in the 17th century BC and is described in the New Testament.

READ
Petra, Jordan - the city carved in the rock

Lake Tiberias is a freshwater body of water, an area of about 160 square kilometers and a depth of up to 45 meters. It is of tectonic origin – like the Dead Sea, the Sea of Galilee was formed by a break in the earth’s crust.

Lake Kinneret is of great importance for Israel, it is associated with a lot of historical events, so it attracts thousands of tourists every year. The lake is also the country’s main source of fresh water.

The level of Lake Kinneret today

Unfortunately, in recent years, sad news has begun to appear that Lake Kinneret in Israel is drying up. Its water level has always depended on the amount of rainfall and the activity of water extraction for economic activities. Several dry winters have resulted in significant shoaling, with unpleasant consequences. The consumption of water from the lake was greatly reduced, but this did not save the situation. The Israeli government decided to pump 100 million cubic meters of fresh water into the lake each year until 2022.

The Sea of Galilee in the Bible and in art

Lake Tiberias has witnessed major milestones in human history. As early as the Early Bronze Age, the “sea route” from Egypt to Mesopotamia ran through the body of water. In the Bible, Lake Galilee is mentioned in connection with the cities of Kinneret and Tiberias, which became a Jewish center in 70 AD. In 1187 BC near Lake Gennesaret a battle between crusaders and the troops of the Egyptian Sultan Salah ad-Din took place.

But the main events that made Lake Kinneret famous around the world were associated with the life of Jesus Christ. It is believed that this is where one of the miracles happened – the water passage of Jesus Christ. Archaeological excavations are currently underway on the northern shore of the reservoir at Capernaum (Kfar Nahum), where the Savior lived and preached.

Biblical miracles are reflected in the works of painters. Of Russian artists, Vasily Dmitrievich Polenov is notable with his Gospel cycle of paintings depicting the Lake of Tiberias. Of foreign paintings, the most famous is Rembrandt’s Christ in the Storm on the Sea of Galilee. It depicts another miracle of Jesus Christ – taming the storm on the sea, when Christ was crossing it with his disciples. Since the theft of the painting from the Boston Museum in 1990, the whereabouts of this masterpiece are unknown.

Holidays at Lake Kinneret in Israel

Of course, the events described above attract many tourists and pilgrims to Lake Kinneret. Sacred cities on its shores with ancient churches and sights will appeal to all lovers of antiquity. But this is not the only thing that Lake Tiberias is famous for. A comfortable climate, equipped campsites, picturesque nature attract lovers of beach holidays in Tiberias.

The Beaches of Lake Kinneret

The beaches of Lake Tiberias are divided into official and unofficial. The difference lies in the presence of lifeguards and level of service. On unofficial beaches tourists are left on their own: no one watches the safety, but you can relax for free, bring your own beds and tents. Official beaches, as a rule, are paid, have the necessary infrastructure and paid parking lots.

The weather at Lake Kinneret is pleasantly warm even during the winter months. The average air temperature in January is +18 ° C and in July it is +32 ° C. The only downside for vacationers may be the unexpected storm. Such events happen often and the locals know how to recognize the approach of the elements.

The Sea of Galilee in Israel is known for the fact that it was fished by the Apostle Peter. Local restaurants often serve Galilean tilapia, which is abundant in Lake Kinneret. Fishermen catch other species of freshwater fish such as catfish, carp, and trout in the reservoir.

How to get to Lake Tiberias

Tourists arrive in Israel via Jerusalem Airport or Tel Aviv Air Harbor. From there, there are many ways to get to Lake Tiberias. Organized groups are usually taken by tour companies selling tours to Lake Kinneret. Independent travelers can get to the city of Tiberias by intercity buses or by renting a car.

Away by car takes about 2 hours from Jerusalem and 1.5 hours from Tel Aviv.

From Jerusalem to Tiberias there is a bus number 959. The only direct route from Tel Aviv Central Station is bus number 836.

Traveling around an unfamiliar country by rented car not everyone would dare, and the group travel in buses is also not everyone. To solve this dilemma and get to Lake Kinneret in comfort will help transfer service KiwiTaxi.