Walking up from Piazza Michelangelo and through the quiet streets, you will find yourself near this amazingly beautiful church. 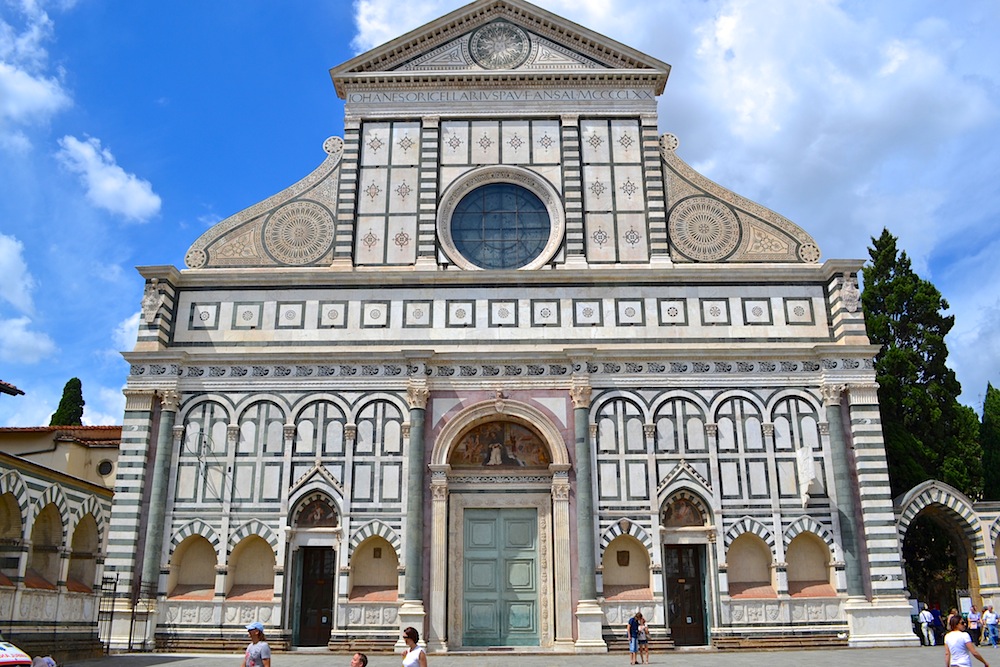 From here you have beautiful views of the city. The church of San Miniato is especially beautiful in the evening light, which makes its marble finish sparkle.

The first Florentine martyr named Miniato (Minas, Minias) was most likely of Armenian origin and ended up in Italy around 250.

Legend has it that he was wealthy and profligate at first, and then he changed his outlook and retired to a cave. At a time when the emperor Decius was persecuting Christians, Miniato refused to worship the pagan gods, was tortured and beheaded. According to legend, he picked up his own head and, holding it in his hands, went to his native cave to die. 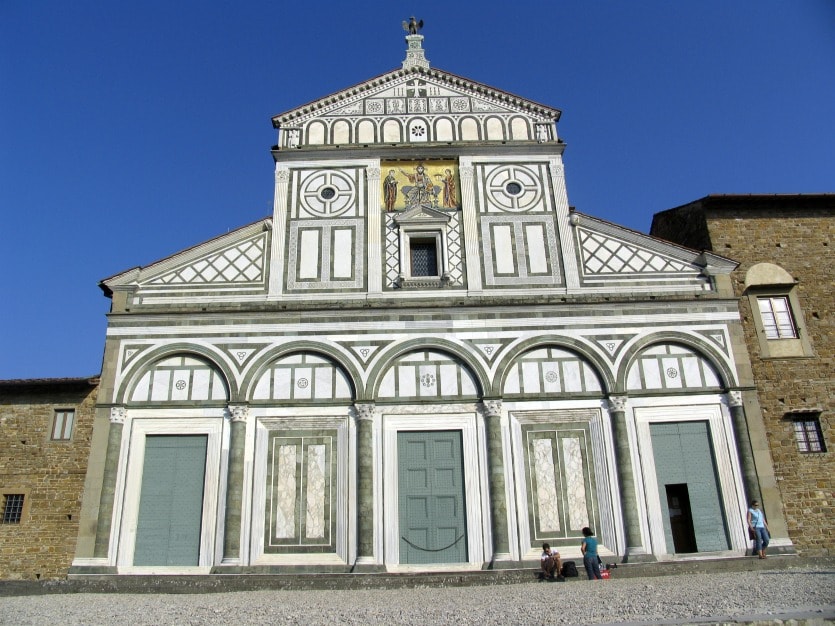 In the fourth century, a chapel was built on the site where Miniato had taken refuge. In the 11th century, Bishop Guildebrand built a church that for a long time was considered the most beautiful in the city. Next to it the Benedictine monastery grew and joined the Congregation of Cluny. In 1373 the Basilica of San Miniato al Monte, or St. Miniato on the mountain, was taken over by the Olivetans, who still own it today.

Curiously, the Romanesque church was not reconstructed during the Renaissance period. Only in 1523-1535. Baccio d’Agnolo built a squat bell tower and Giuseppe Poggi created a magnificent staircase of white marble.

The facade of the basilica, decorated with multicolored marble, is an example of the Tuscan style. Its lower tier is divided by five semicircular arches. The first, third and fifth have doorways, while the other two are decorated with panels of colored marble. 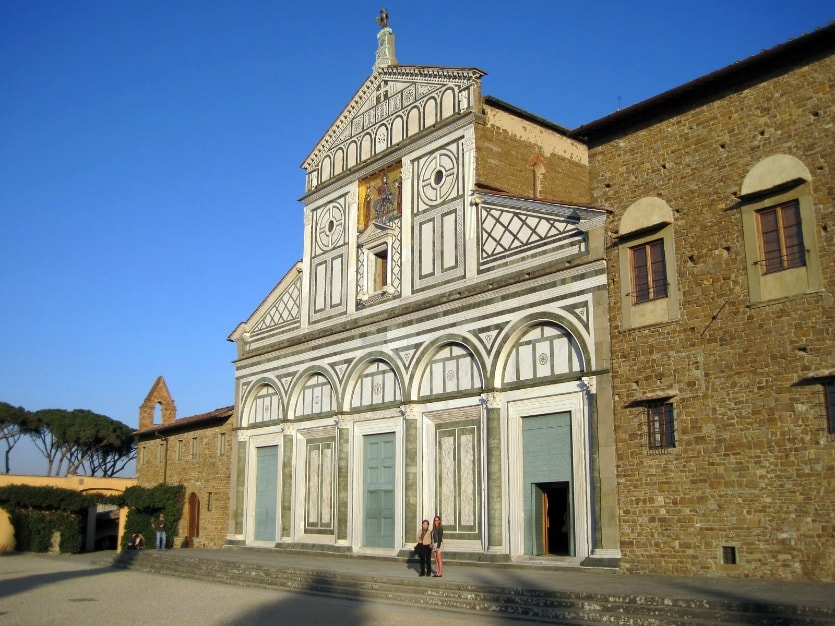 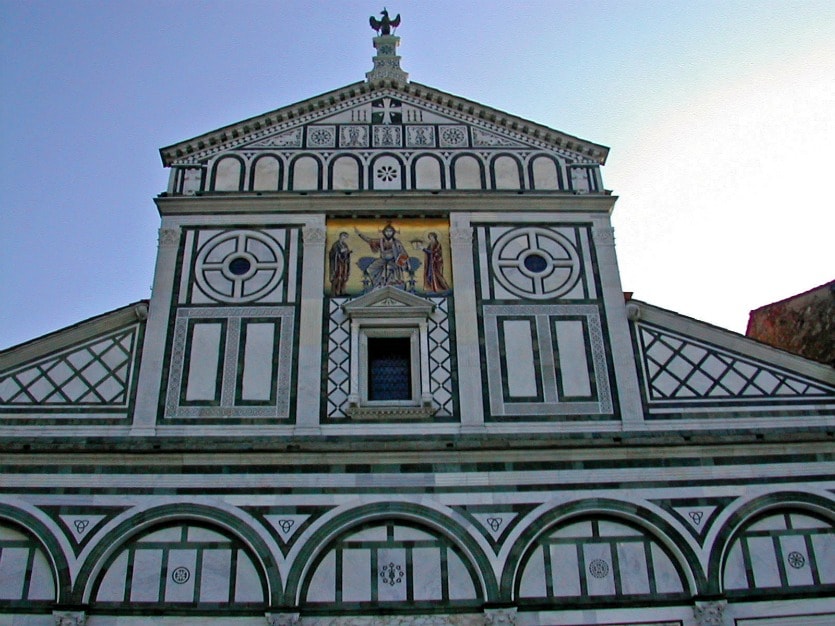 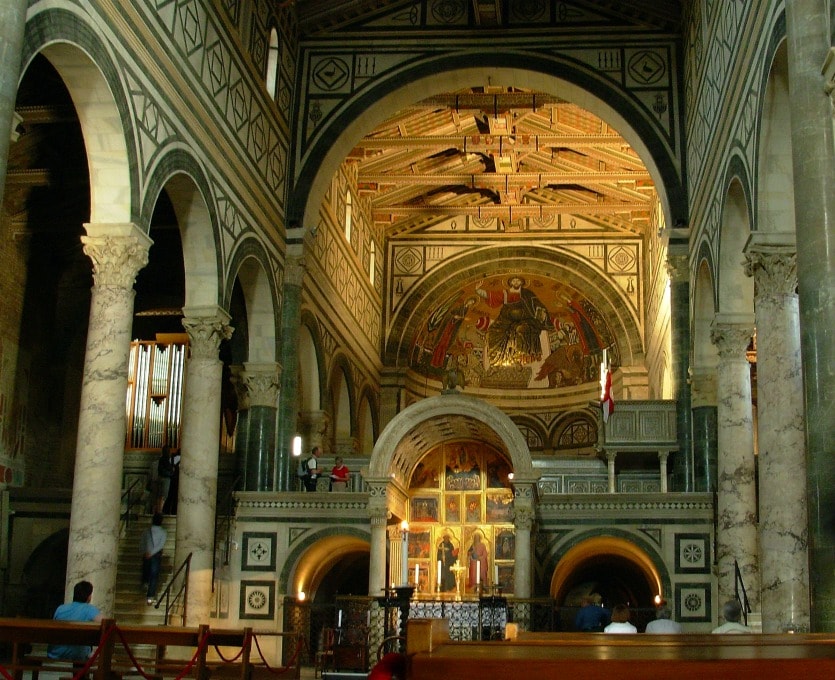 The interior decoration of the three-aisled basilica of St. Miniato on the mount, which has no transept, is Romanesque-Florentine.

On the floor of the central nave is a marble mosaic depicting the signs of the Zodiac and symbolic animals. The walls of the temple are decorated with frescoes of XIII-XIV centuries. 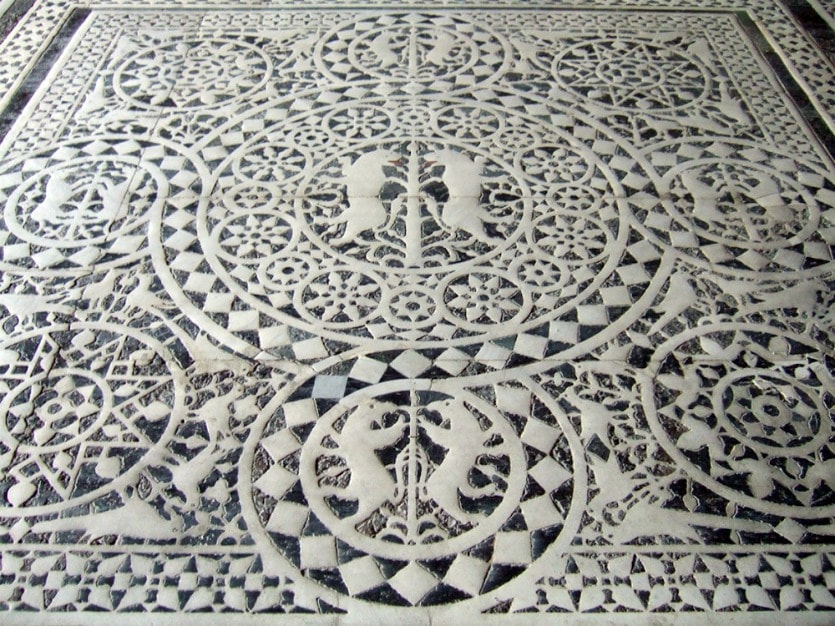 The crypt of the basilica, surrounded by a wrought iron lattice, was built in 1338 and contains the 11th century altar with the relics of St. Miniatto. The vaults of the crypt in 1341 were painted by Thaddeo Gaddi, but only the remains of the frescoes are extant. 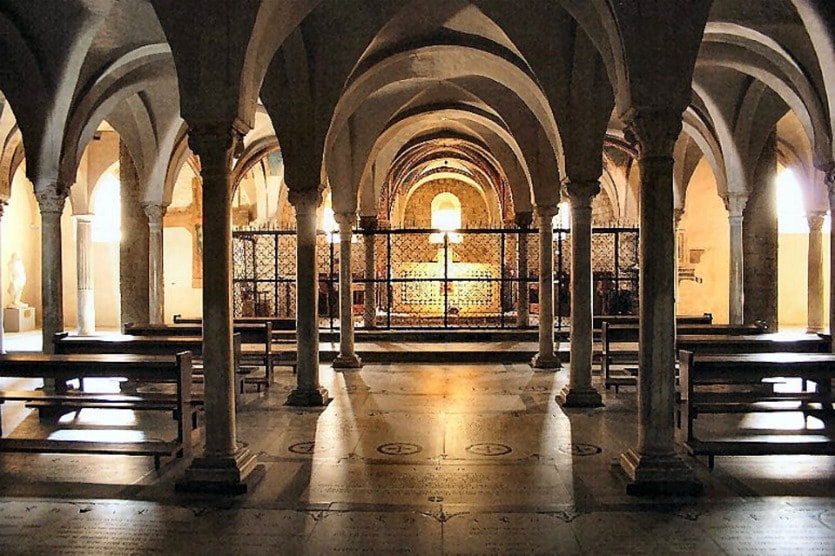 In the presbytery there is a pulpit, made in 1207, and seats in carved wood. In the floor of the domed conch of the apse in 1297 there is a mosaic, on which the Christ on the throne, the Virgin Mary and the king of Armenia are depicted, laying the crown on the true king. 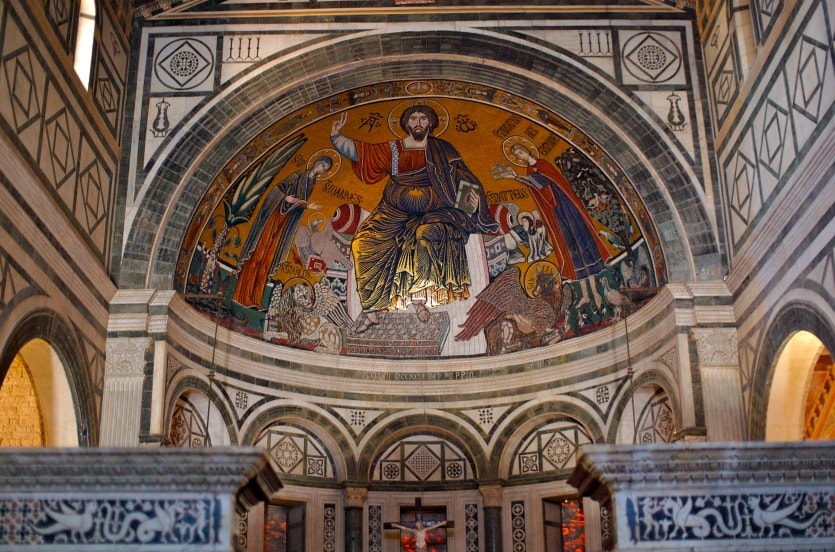 The sacristy is decorated with frescoes with scenes from the legend of St. Benedict, created by Spinello Aretino in 1387. 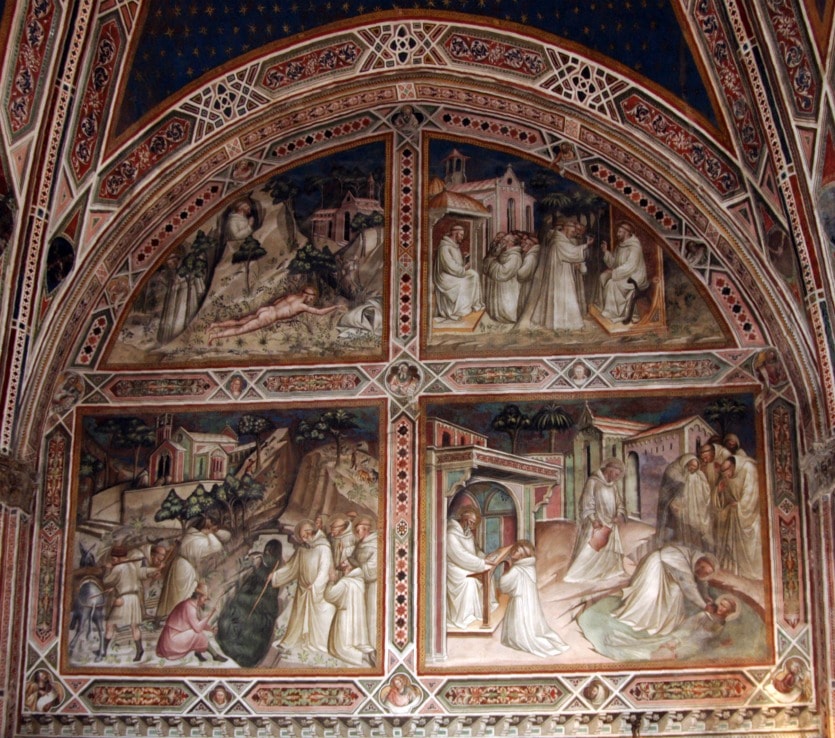 The chapel of St. James, also known as the Chapel of the Portuguese Cardinal, was built between 1459 and 1467 and is decorated with frescoes by Antonio Manetti, Piero del Polaiolo, Alessio Baldovinetti. It was also decorated between 1461 and 1466 by Luca della Robbia. 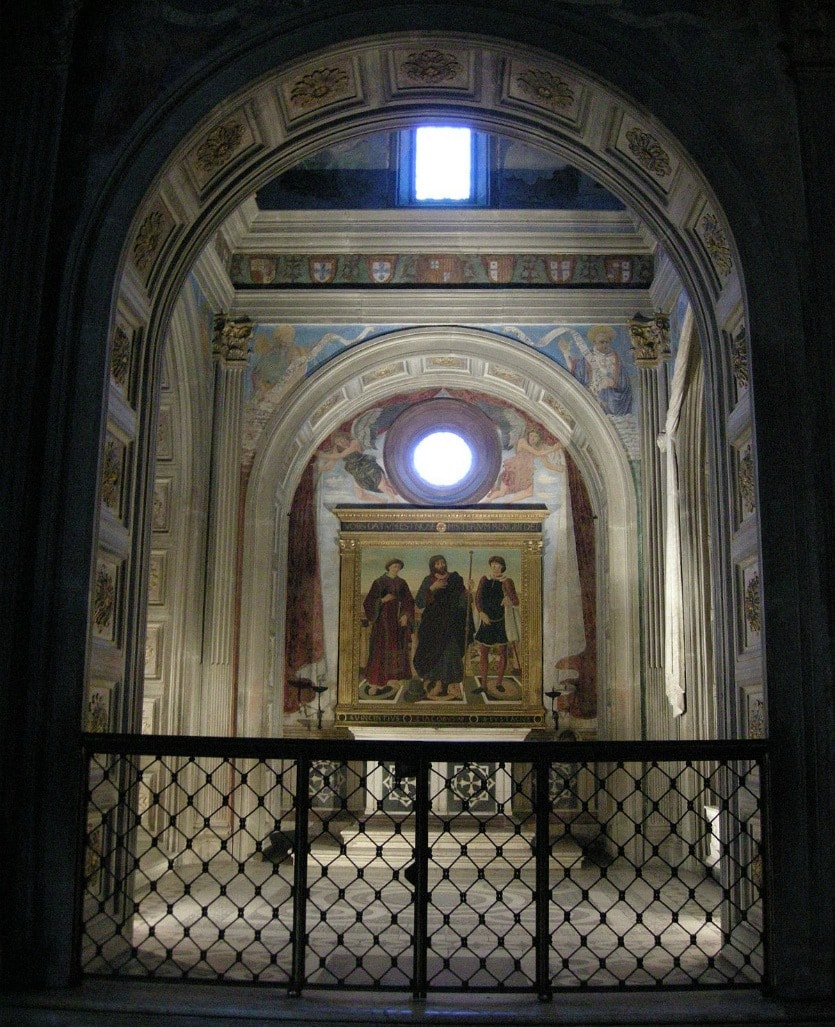 In the chapel is the tomb of Cardinal Giacomo di Lusitania, created in 1461 by Antonio Rossellino. 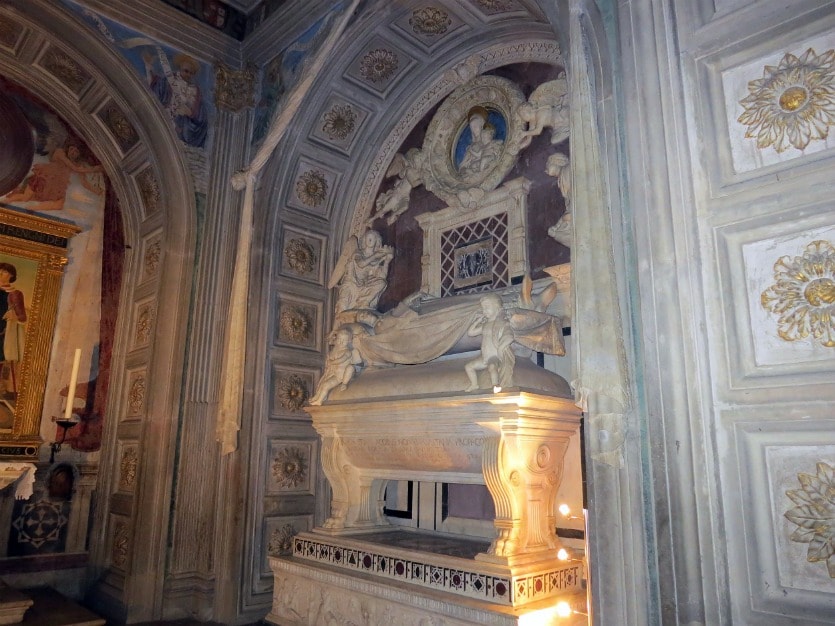 The Chapel of the Crucifix in the center of the basilica was designed by Michelozzo di Bartolomeo. Its vault is decorated by Luca della Robbia. 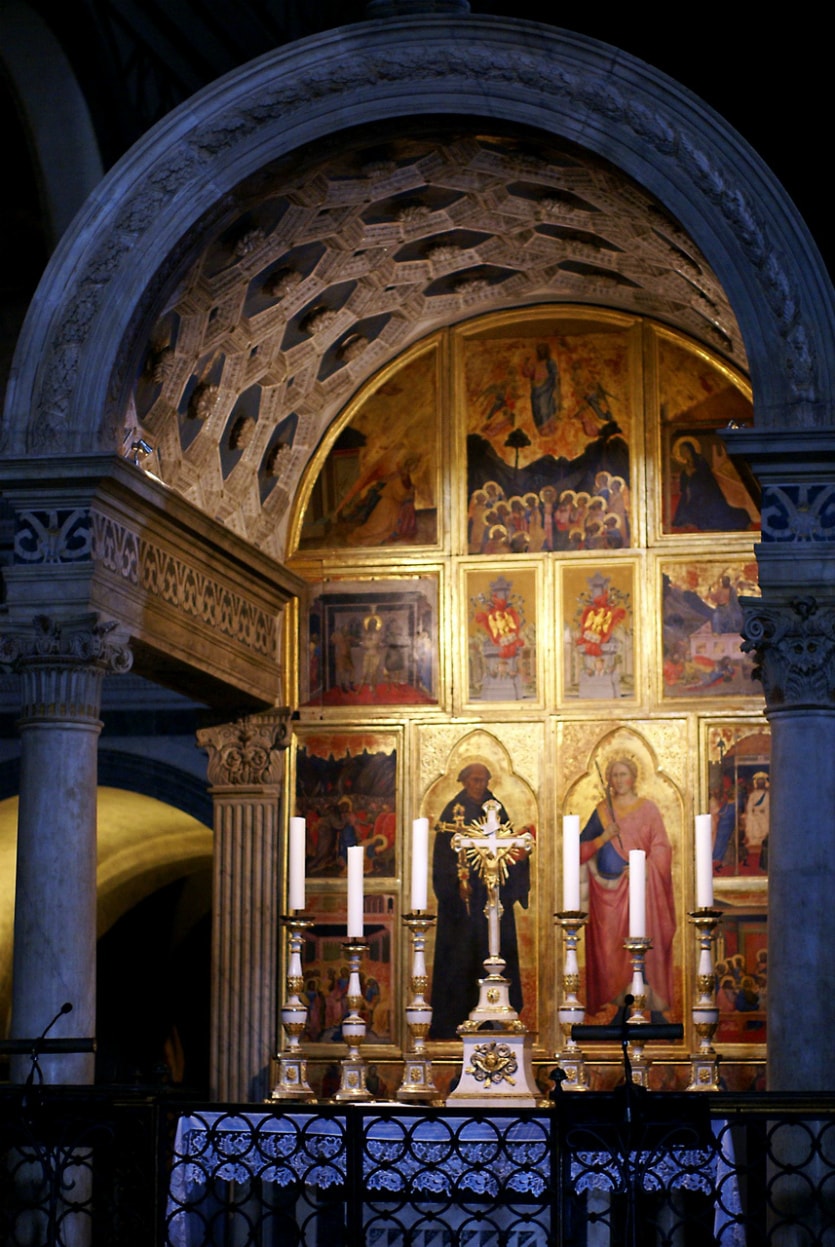 Next to the church is a 15th century monastery. At the siege of the city by the Spaniards in 1530, Michelangelo erected walls to protect the monastery and the bishop’s palace. 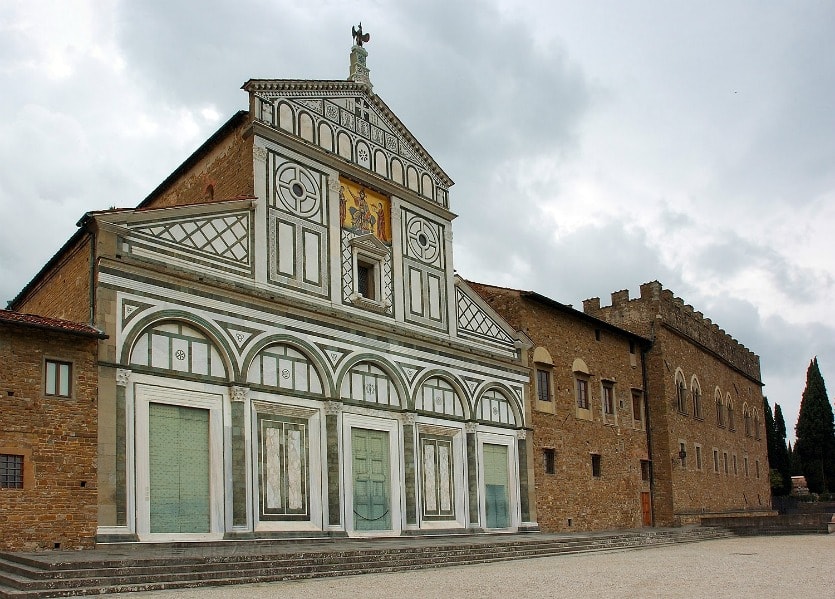 The cemetery is situated next to the church, where are buried the writer Carlo Collodi and other men of science and art who created Pinocchio. 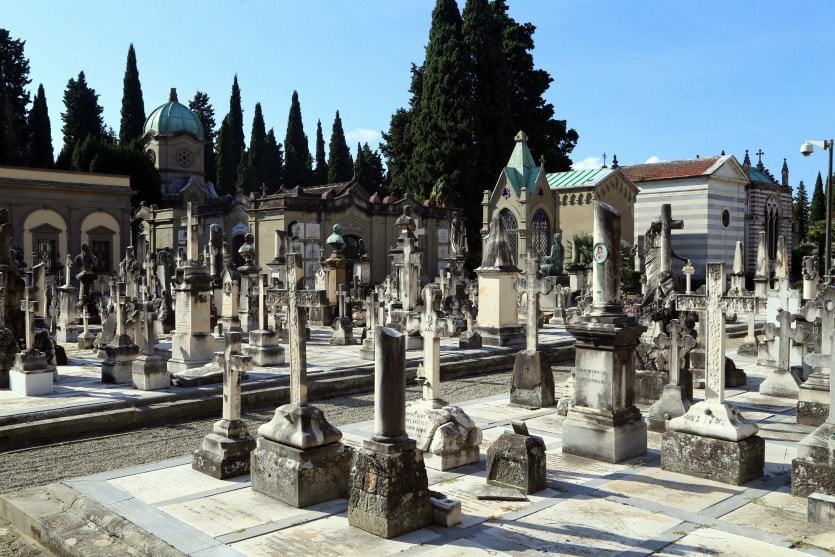 Here is a video review for a “live” view of the architectural features and masterpieces of San Miniato al Monte. 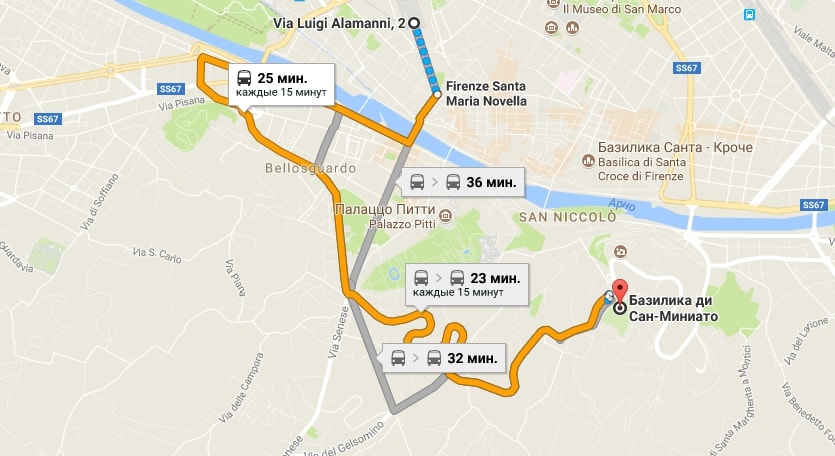 From the observation deck in Piazza Michelangelo you can walk to the church in 5-7 minutes. 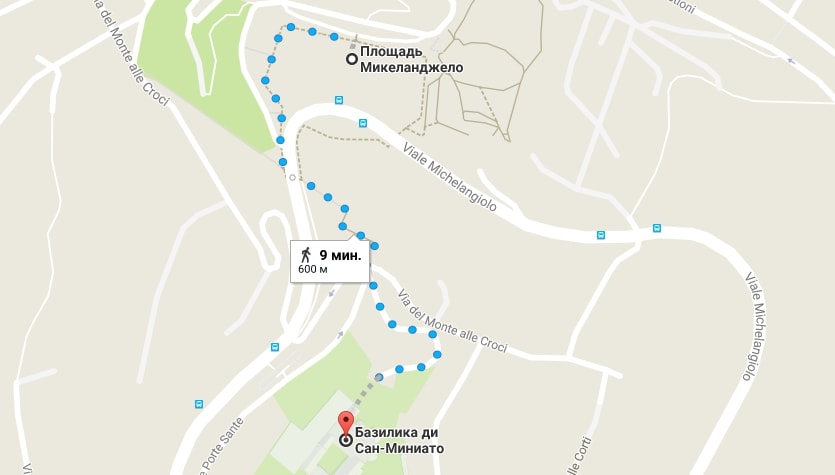 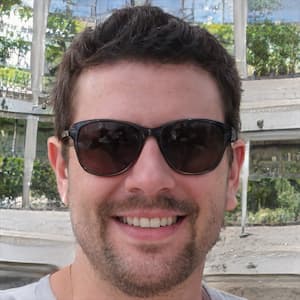 Is perfectly aware of all the sights of Italy. In his spare time he travels around the country and is willing to share his experiences in articles on Italy-Insider.

San Miniato al Monte is a church in Florence that was untouched by Renaissance architects. The only innovations introduced were a new bell tower and white marble staircase. The church is active. During the evening service one can listen to the wonderful singing. 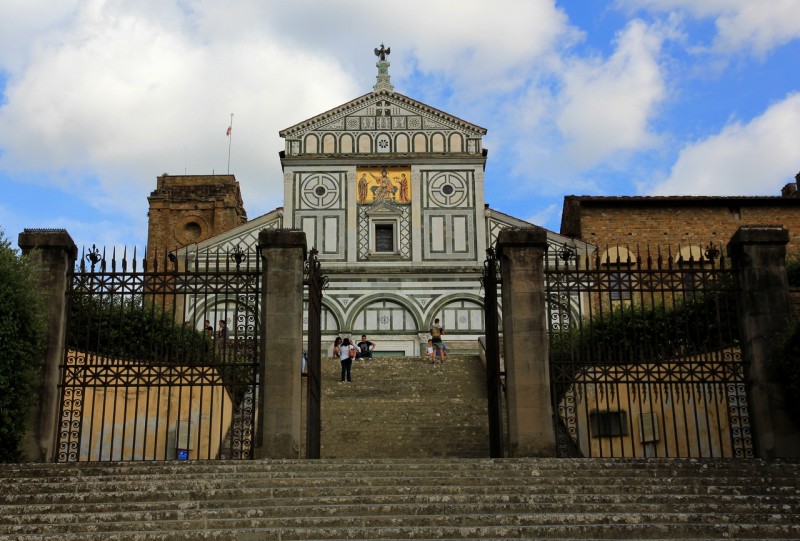 The Basilica di San Miniato al Monte stands on the hill of Monte alle Croci, on the banks of the Arno. The architecture of the church is unique – it is a completely preserved example of Florentine Romanesque style. The church was not reconstructed during the Renaissance period.

The basilica was founded on the site of the death of the first Florentine martyr, the pilgrim Mignato (Minias). Since the fourth century there was a small chapel of St. Peter on the hill. In the XI century it was decided to build a grandiose church instead of the old sanctuary.

Construction of the basilica of San Miniato was begun in 1033, thanks to the efforts of Bishop Alibrand, on the will of Henry II of Bavaria and his wife, the devout Cunigunda. At the insistence of the imperial couple, the remains of St. Minyato were transferred to the altar of the new church, accompanied by the highest ranks of the clergy and the bishop himself.

The architecture of the temple 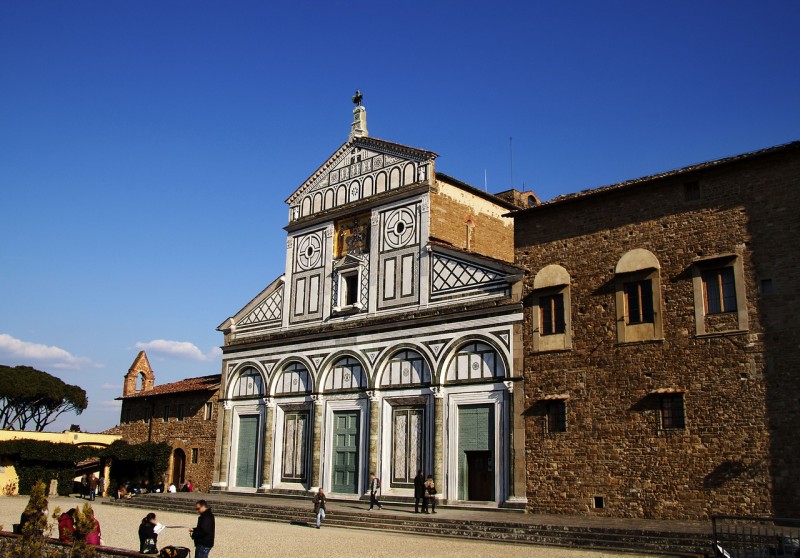 The basilica is a three-nave Romanesque structure. Its facade is divided by entablature into three tiers. The lower level has five semi-arches on columns of green stone with white marble capitals. In the second tier two symmetric pediments are assigned to the side aisles, and between them is a portico with four pilasters and a window. The upper part of the portico is decorated with mosaics depicting Jesus, the Virgin Mary and Saint Minyato.

The third tier is a triangular tympanum surmounted by a cross and decorated with inlays. At the top of the pediment we can see the copper eagle, symbol of the Guild of Kalimala, guardians of the church in 1288.

The bell tower collapsed in 1499. It was rebuilt by the architect Baccio D’Agnolo. The reconstruction of the tower lasted until 1533. At the beginning of the XX century the Campanile was again completely restored. Four bells were reinstalled; the largest of them weighed 40 tons.

Internal decoration of the basilica 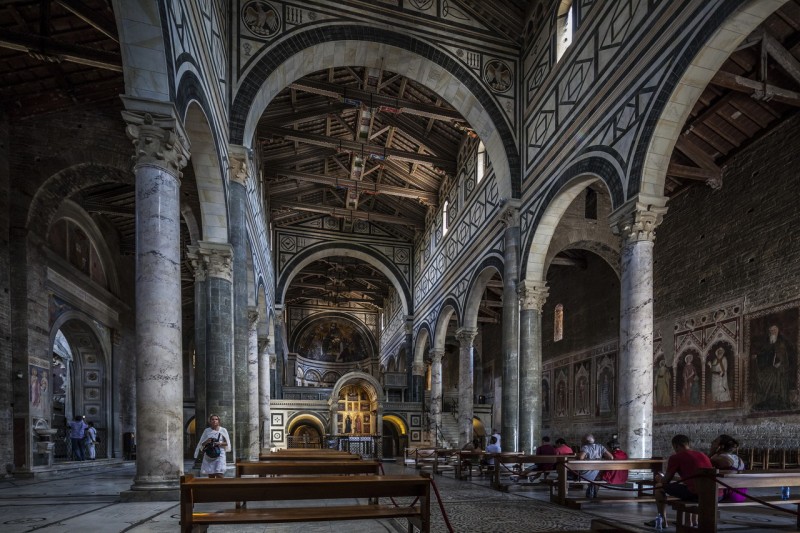 Interior of the Basilica, by Koman

The Basilica’s interior is entirely Romanesque. The ceilings are flat, with open patterned rafters. The dominant feature of the interior is the high choir above the crypt. The marble mosaic floor of the central aisle was made in 1207. It is decorated with geometric ornaments and astrological symbols. 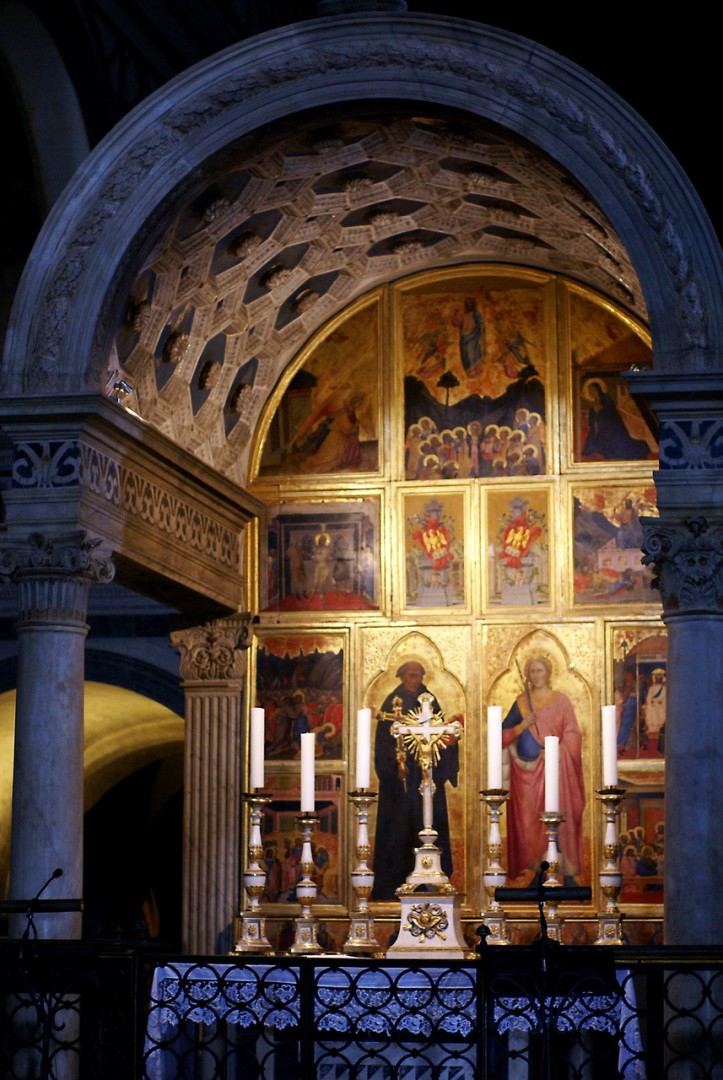 In the center of the main aisle is the Chapel of the Crucifixion. Its walls are decorated with panels by Agnolo Gaddi. The ceramic decorations on the ceiling were made by the famous sculptor of the Quattrocento, the skilful ceramicist Luca della Robbia. He also created the crucifix above the central altar.

Chapel of the Portuguese Cardinal 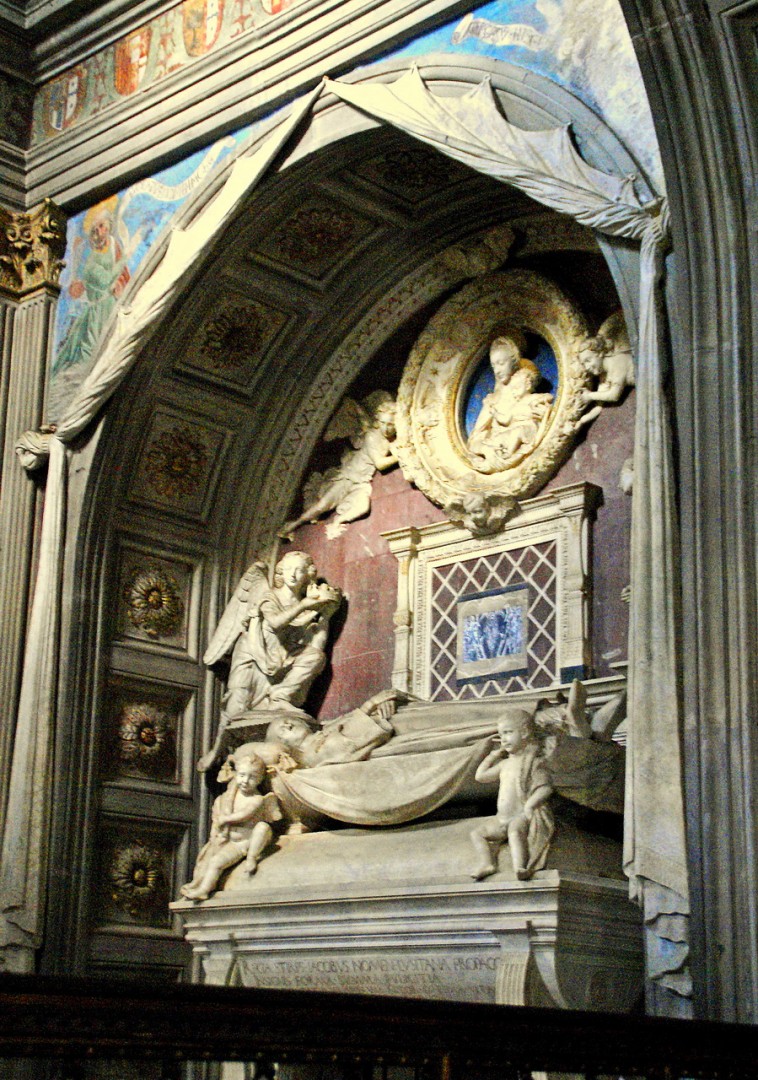 Chapel of the Portuguese Cardinal, photo by HEN-Magonza

The funerary chapel of the Cardinal Cardinal of Portugal is located in the left aisle. This sepulchral chapel was built in 1473, designed by Manetti. The tomb monument to Cardinal Giacomo of Lusitania was executed by Bernardo and Antonio Rossellini. The decoration of the chapel was done by Luca della Robbia, Alesso Baldovinetti and the Pollaiolo brothers. 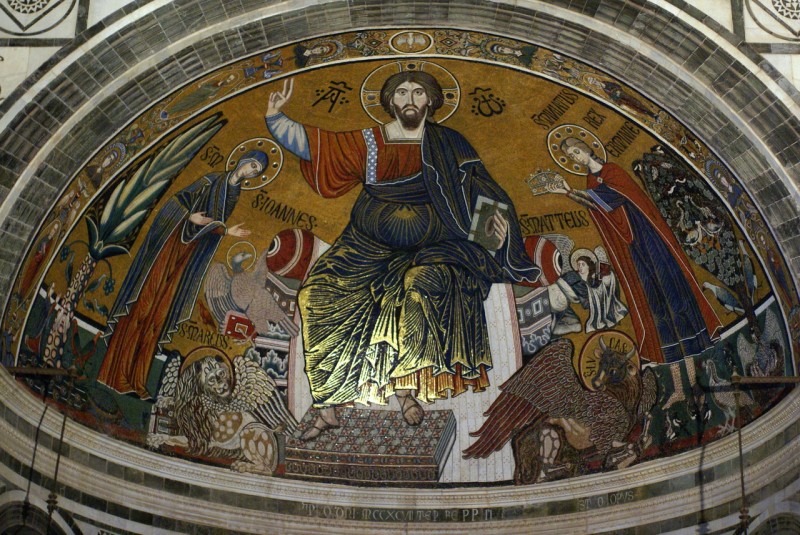 Byzantine mosaic of the 13th century depicting Christ, the Mother of God and the king of Armenia on the vaults of the apse, photo by HEN-Magonza

The vault of the apse is decorated with a medieval mosaic by an unknown author depicting St. Mignato. The pulpit of the temple, located in the presbytery area, dates back to the beginning of the XIII century.

From the presbytery one can enter the sacristy. On its walls is a cycle of narrative frescoes from the life of St. Benedict, painted by Spinello Aretino. Light enters the vault through a modern stained-glass window, while the original Gothic stained-glass window of the sacristy was destroyed in 1630. The wooden vestry cabinets were made by the master Monichatto. 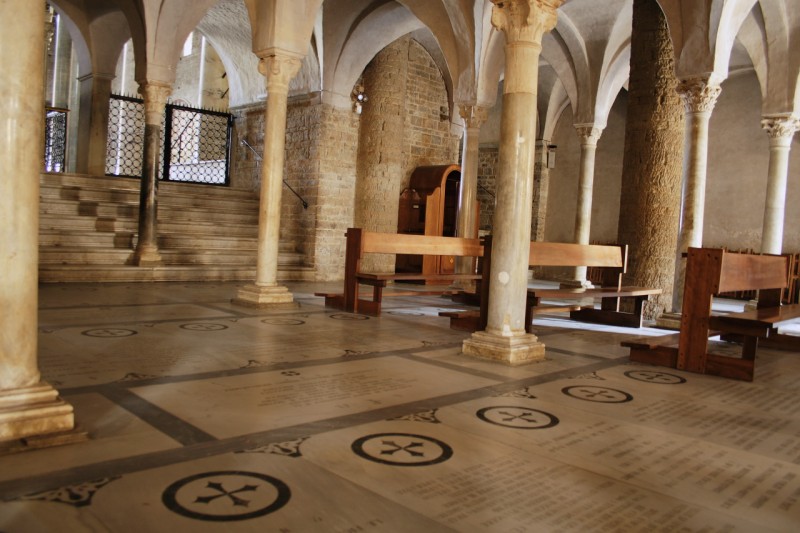 The crypt of the basilica is under the chancel and is divided into seven naves – four lateral and three central. The flat cross vault of the underground part of the temple is supported by 38 columns of marble and brick. On the capitals of the columns in some places there are traces of gilding. The vaults on the left side of the crypt contain mid-14th century frescoes by Thaddeo Gaddi.

It’s very simple – look not only on bookings. I prefer the search engine RoomGuru. It looks for discounts simultaneously on Booking and 70 other booking sites.