Bielsko-Biala – Responses of those who moved here 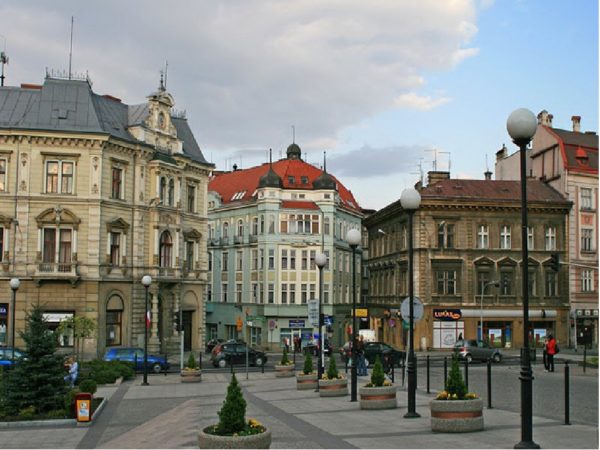 My husband and I regularly visit Bielsko-Biala, at least for the past four years. The impressions are very pleasant, and above all, the communication with the local people. Very friendly, tolerant and affable. Although we drove the first time with apprehension, because relations between our countries are not the easiest. The cab driver, who drove us from the airport to the station, on his own initiative started a conversation about the relations between our countries and said: do not listen to what they say about the Poles, we have a very good attitude to the Russians and we like to visit Russia. By the way, the older generation almost all understand and speak Russian, because they learned it at school. The city is very beautiful, the Beskids mountains are fascinating and it is simply impossible not to fall in love with them. Tasty food, a good, mild climate, beautiful architecture! A lot of parks! The attitude of Poles to their families, to their children is delightful! Children, as a rule, are well mannered, quiet. It is obvious that many do sports – biking, rollerblading, swimming pool, in winter – skiing, the good thing – next to the mountains, which offers a beautiful view of the city itself! In short, I want to come to Poland and in particular to Bielsko-Biala again and again. Thank you!

The small town of Bielsko is more old and famous, in contrast to his new neighbor Biala, which even had nothing to boast about. The usual dull architecture and residents, dripping with jealousy of saliva in the stormy river streams that separates the two cities.

In one, life was boiling and developing, there was an architectural heritage to flash before the nobility, while in the other, it was a simple bedroom community for the less fortunate. So that the neighbors from more prosperous city did not think that beggars without any taste lived here, the City Hall was built at the very border to spite them. They put their hearts, their ideas and the money allocated by the townspeople into its construction, so that the neighbors in Bielsko would know that everything was fine here, too.

Is it reasonable to ask who lived on one side? Rich Germans, Poles and Jews. Who on the other side? Poor Poles, Germans and Jews. So much for simple social inequality and division.

By the way, the Jews generally have a hard time in Poland, because in the local language their nation sounds like “yid”. It’s a shame, but what can you do if there’s no other word?

However, Bielsko became famous not because of its rich citizens, but only because of its textile industry, because the local league of weavers competed closely with English manufacturers, producing a very high quality product. A few centuries later, the city has grown and a couple of steel mills, so the people rightly earned the nickname Silesian Manchester.

Today all this production is gone, and the architectural heritage that remains is transformed into modern loft districts, giving them a glossy look. Today the old industrial buildings house fashionable boutiques and shopping centers, hotels and restaurants, exhibition halls and co-working halls.

… Better go to Bielsko-Biala yourself, enjoy the atmosphere of the market square, inhale the aroma of freshly baked rolls, stop for souvenirs in stores selling “monuments” and enjoy the tranquility of a boring city.

And when evening comes – go to the same place, but in search of fresh beer and delicious meat.

Modern Bolsko-Biala is a city of great opportunities and prospects. Here, fortunately, you won’t see any old factories or abandoned factories with frightening eyes of broken windows. Everything is being reconstructed, rebuilt, and repaired on time. New high-rise buildings with office space are being built en masse. Excellent development and road infrastructure – the ultramodern ring road, which encircles Bielsko-Biala asphalt wreath, greatly facilitating the movement of vehicles. The city is a major railway and road transport hub, providing excellent connections in all directions. Comprehensive repair and restoration works are also carried out in historic buildings, such as the Sulkowski Chateau, or stonework on the Old Town Square.

It should be noted that for several years Bielsko-Biała has been ranked second in Poland for the development of private enterprise.

The cultural life of Bielsko-Biała also deserves special attention. The old market square is a meeting place of the local beau monde. Delightful cafes, cozy restaurants, noisy pubs. As the Poles say – to a color, to a choice (to taste and color). You can talk about Bielsko-Bialaia as a place for a variety of festivals – from music to theater, bringing together under its aegis guests from the entire Eastern (and not only) Europe. By the way – Bielsko-Biała can boast a unique monument, perhaps the only one in the entire Polish-Lithuanian Commonwealth. The great reformer Martin Luther King towers over the Old Town Square as if calling on each of the passers-by to change something in their lives.

Bielsko-Biala is a unique city in every sense. Not for nothing that many young people from other regions of Poland come here every now and then to start their own small business.

Ivan, I think it’s very nice to live there – in general, the city is one of the richest in the city. If Katowice is the industrial center of Silesia, Bielsko is a respectable suburb.

The city is located at an altitude of 262 meters above sea level to 1117 meters above sea level, which causes that in the lower part of the city is different from the weather in the higher altitudes. The city offers many attractions for tourists, among other things, due to the proximity of the mountains rises the longest in the Beskid, in the summer when the rope on top Ruwnica, the bobsled run and in the central city cinemas: Cinema City Cinema Extreme 5D, Helios studios with the possibility of watching movies in 3D, museums (weaving, regional culture ), swimming pools (8), tennis courts and clubs and dyskoteki.Miasto have a wide range of accommodation.

READ
The 15 best sights of Teriberka - description and photos

It was my first visit to Poland, I liked everything. Though I was lucky with the weather, it was sunny, although before the trip I was frightened by rains and cold (the whole June it was like that – the average temperature was +12) – whether I had brought my Rostov heat with me, I dunno, but it was almost +30))))

I was also mentally prepared for the unkindness of the Poles. But if we don’t touch political topics, they are very nice people. Although with my friend, whom I went to, there were funny and not so funny incidents. At a time when there were no social networks, we often wrote paper letters (I’m not 100 years old

), but paper letters are nicer to receive, so from time to time I threw away on a disk at the time of our “novelties” music, photos, movies, and sent it. She was surprised to hear that there are pop, rock and rap music in Russia and in any other country. She was sure that the Russians only listen to ditties…And there are a dozen of such stories.

And so, Bielsko is located not far from 2 major cities with a population of one million people, Krakow and Katowice, on average 2 hours by car to any of them.

In Bielsko there are 3 universities.

Poland – a paradise for a shopaholic, I’ve never seen such a number of malls per square kilometer, there are large “Tesco”, “Kaufland”, “carrefour”, there are as well known in our Decathlon and Auchan (only they call it for some reason that Oshon), Real, large and small “бедронки” – that in Polish means ladybug, they are like our “magnet” or “five” – they sell products, and mostly made in Poland, or issued specifically for this network. Well, “SFERA” – it’s huge, in size I can compare it probably only with the MEGA “Belaya Dacha” in Moscow. Or two medium-sized mega stores. List all the stores – just get tired, their oooooooooooo many (bershka, Stradivarius, Zara, Nike, Adidas, Top Secret, Mohito * * *, House, Reserve, etcd).

READ
The 25 best sights of Antwerp - descriptions and photos

Right next to the Sphere is a “salt grotto. Salt Grotto, where people sleep and recuperate.

The architecture of the city is very beautiful, there are old buildings, many churches, in the center there are souvenir shops where you can buy local craftsmen products (pottery, textiles, etc).

In the building opposite the town hall you can buy souvenirs, after I learned that I’m from Russia have apologized for not having a guide in Russian, but in addition to my magnets also put a guide in English and the CD about Bielsko-Biala

In town, there is a theater and a cinema, the castle of the local prince, unfortunately, I do not remember his name (though it was closed for repairs for a month), clubs, pool – which is more like an aquo-park (3 pools of different depths, fungi-fantasy for the smallest and two large slides for adults) well, and much else interesting))))