There are hundreds of places to see in Bali. In a relatively small stretch of land there is room for luxuriant tropical vegetation, dormant volcanoes, picturesque beaches, and amazing human buildings. Many of Bali’s attractions draw tourists from all over the world in droves, but there are also little-known places. So I’ve divided the list of things to see in Bali into two parts. The first is the Top 10 most famous tourist spots in Bali. The second includes the Top 5 Bali attractions that have not yet been hiked to.

What’s the best way to visit attractions in Bali?

There are several options:

For each interesting place in Bali, I will include both the coordinates on a map to get there on your own, and the tours where you can see the attraction.

Bali is sometimes referred to as the Island of a Thousand Temples, but this is incorrect – in fact, there are considerably more temples here. So don’t be surprised that there are a lot of temples on the list.

It is compulsory to wear closed clothes to visit the temples. Usually a sarong, a long loincloth, is given at the entrance. Sometimes for a fee, sometimes free.

Of course, #1 on my list is Batur Volcano. On the blog, I told how we met the sunrise at the volcano and our friends shared their experience of climbing Batur. By the way, climbing Batur Volcano, which should definitely be done with a guide, is a rare chance to visit an active volcano. 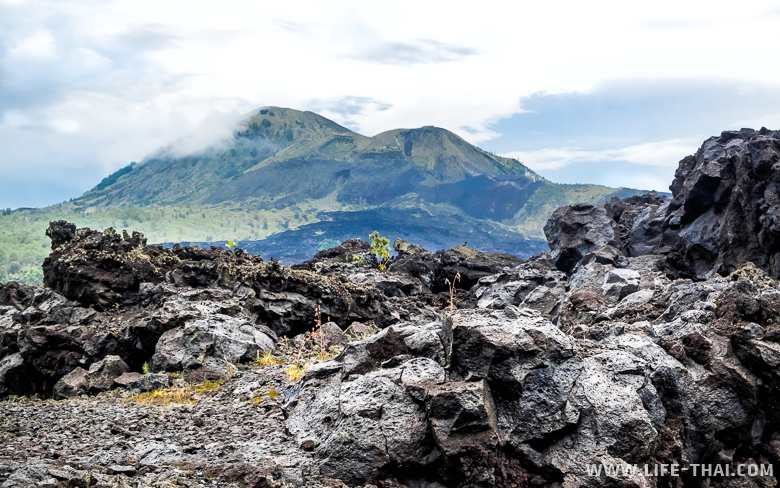 The last major eruption of the volcano was in 1968, and you can see fields of solidified lava on its slopes. In 2000, the volcano was still spewing clouds of ash into the sky, and hot air still rises from some rocky crevices, which can even be used to cook food.

The multi-tiered silhouette of Ulun Danu temple pagodas on Lake Bratan has long been one of Bali’s most recognizable symbols – it is even depicted on the 50,000 rupee bill. Ulun Danu consists of four shrines, each dedicated to a different deity. The three main Hindu deities, Shiva, Vishnu and Brahma, are worshipped here, while the fourth sanctuary was built in honor of Devi Danu, goddess of Bratan Lake, from whose name the temple was named. 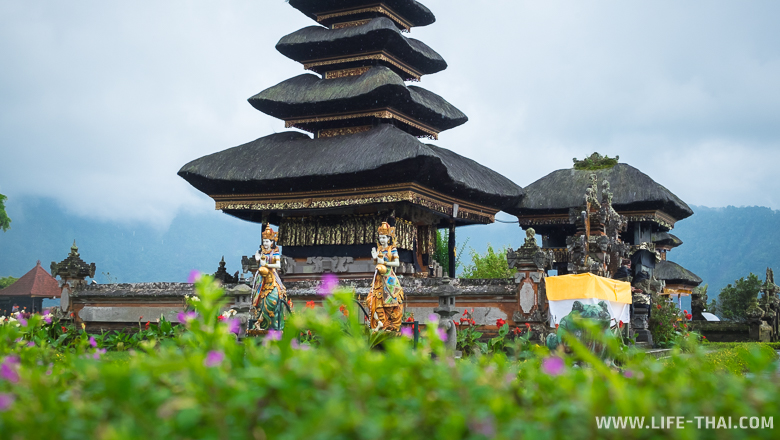 The lake on which the temple stands, is considered not just sacred, but also healing. Locals believe that ablution in its waters not only cures diseases, but also brings back youth.

Lempuyang Temple and the split gates of Chandi Bentar

Lempuyang Temple is one of the trendy places in Bali. All because of the gateway overlooking the volcano Agung.

Reviews about this attraction are quite different. Some are confused by the queue of tourists eager to be photographed in the gateway. Someone says that Pura Lempua is a completely magical place. But a visit to the temple is definitely worthwhile.

Visits to Pura Lempuyang include tours:

Pura Tanat Loh is a 16th century Hindu temple built on a rock in the coastal waters. It can be reached by a thin stone cofferdam and only at low tide; the tide turns the rock on which Tanat Loh is located into a small island amongst the raging waves. As in the case of Pura Besakih, tourists are forbidden to enter the temple.

It is possible to see Tanah Lot on guided tours: 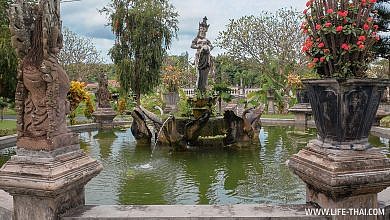 Water in Bali is considered sacred and is often considered in the construction of important architectural structures. Therefore the royal residences were built as water palaces.

The palaces belong to different architectural traditions but the grounds are equally picturesque. Most of it is occupied by artificial reservoirs, but there are also fountains, sculptures, bridges and well-groomed vegetation.

A visit to the palaces includes a tour of “Bali Royal Palaces” and some excursions on the Viator website.

Goa Gajah or Elephant Cave is a complex of cave structures belonging to Hindu and Buddhist religious traditions. The entrance to the cave is in the form of a huge head of a humanoid creature with its mouth open. There is still no consensus on who exactly is depicted on the bas-relief, but the most common version says that it is the Buddhist god Ganesha, whose elephant head gave the cave its name. 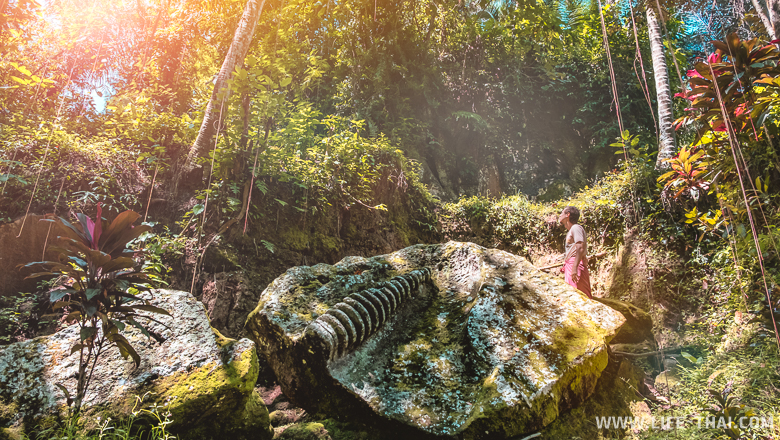 In the area around the Elephant Cave are huge stones with bas-reliefs, overgrown with moss. The place is very authentic and worth seeing 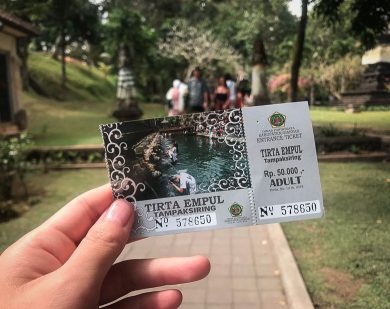 As you can see from my Top Bali Attractions, many of the religious buildings on the island are water-related. Perhaps the most famous of the water temples is Tirta Empul, whose name translates as “Temple of Sacred Water.

It is dedicated to the god Vishnu. There are 12 sacred springs in the temple, and each has its own name and characteristic only for him. Water from the springs comes in special baths, where you can take a dip after visiting the temple.

Ubud – the heart of Bali

The small town of Ubud can rightly be considered the heart of Bali – both because of its geographical location and because it has become a center of cultural life on the island. Its narrow streets are home to dozens of workshops, spiritual and cultural centers, dance and art studios, and museums.

Ubud is a must-see. It is quite different from the bustling coast.

In Ubud, there are several private and public museums, which exhibit a variety of works of fine art. Among them are paintings by local artists, including paintings in the famous Ubud style, and creations by foreigners who have come to the island to seek inspiration. I highly recommend checking it out.

There are several rice-growing areas on the island, but Jatiluvih Rice Terrace is the most famous, having been a UNESCO World Heritage Site since 2012.

You can see the rice terraces with Bedugul & Jatiluwih Rice Terrace Private Tour.

READ
11 of the most beautiful castles in France 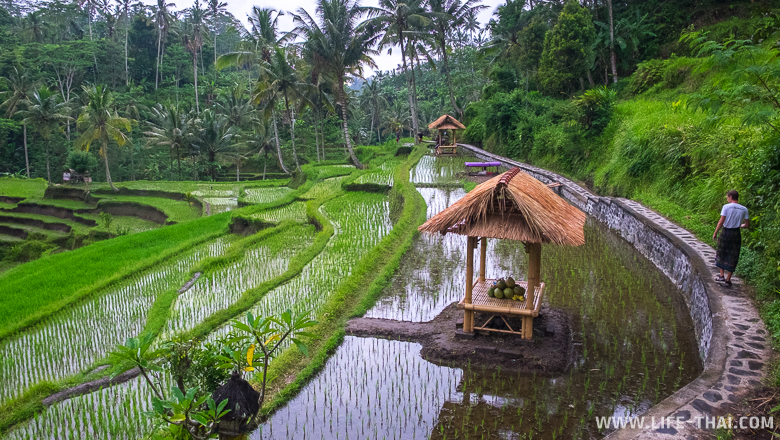 From a bird’s-eye view, the terraces look like giant steps on the hillsides, either with mirrors of artificial water reservoirs or green flaps of rice stalks, depending on the season. 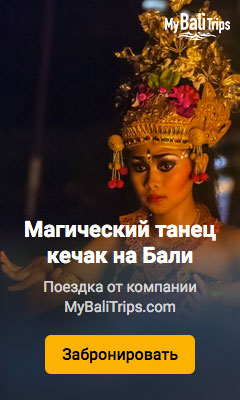 Pura Luhur Uluvatu – one of the main temples of the island and one of the six temples that are believed to protect the island from evil forces and maintain a spiritual balance.

Uluwatu is located on a peninsula in the southwestern part of Bali, on the edge of a rock that is believed to be the petrified part of the ship of the goddess Devi Danu. The temple consists of three sanctuaries, distinguished by altars elaborately carved in black stone.

At 18:00 in the amphitheater near the temple begins an hour-long dance performance based on the plot of a chapter of the “Ramayana. The performance is very popular with tourists, so it is better to buy tickets in advance.

There are several sacred areas in Bali where large numbers of monkeys live, but the Sangeh near the town of Ubud is the most famous one. It is located around the ancient temple of Dalem Agung Padangtegal and here among the statues and thickets of muskrat trees live about seven hundred long-tailed macaques.

For 15,000 rupees, you can watch the monkeys, take pictures, and feed them. The main thing is to be careful because macaques, though accustomed to people, are still wild animals that can bite or steal something from you.

A visit to the monkey forest is included in many tours of Ubud. For example, “Ubud tour + bird park” or the Best of Ubud. 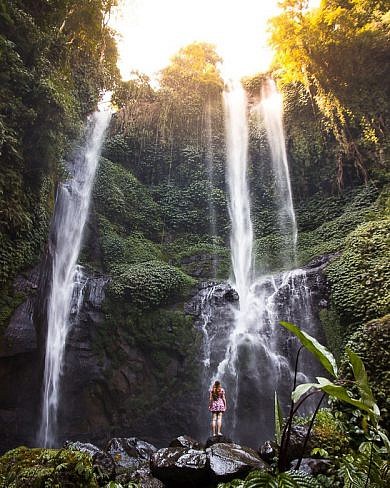 Sekumpul is a spectacular sight all year round, but the best time to visit is from November to April

Sekumpool Falls, consisting of several cascades falling into a rocky crevasse from a height of 80 meters, is one of the most beautiful waterfalls in Bali. Despite its scenic beauty, it is less popular with tourists than the nearby Git Git Falls due to the fact that it is much harder to reach.

A visit to Sekupul Falls is included in the tour “Romantic North Bali”.

The Tombs of Gunung Kawi

Next to the Tirta Empul Temple there are several religious buildings. Their history is closely related to the life of the family of King Anak Vungsu of the Udayana dynasty. There are niches with bas-reliefs and five tombs in the rock on both sides of the ravine where the king, queen and royal concubines are buried. There are also shrines dedicated to the royal family. 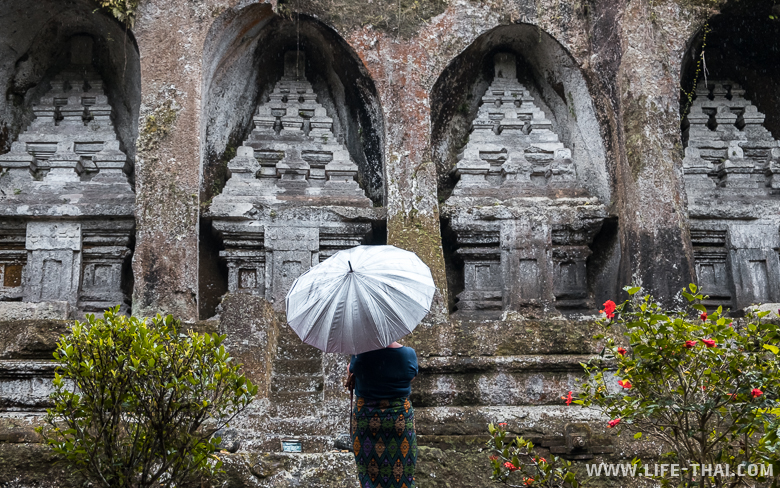 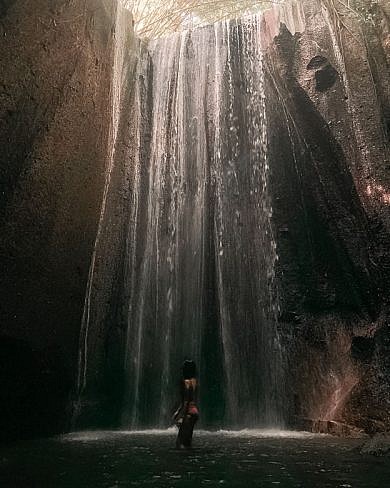 Hidden in a gorge, the Cepung Waterfall is very beautiful and memorable. The waterfall is part of the tour “Best waterfalls of Bali” and 100% deserves its place there.

A cascading waterfall where you can make a very spectacular photo. Admission fee of 15,000 rupees. It is better to visit in the morning.

Pura Besakih – The Temple with the High Spires

The temple complex of Pura Besakih consists of 23 temples located on six terraces on the slope of the volcano Agung. The temples are not connected to each other and are dedicated to individual Hindu deities. The largest is Pura Penataran Agung, dedicated to Shiva. Unfortunately, tourists are only allowed on the first level of the complex, beyond that only worshippers are allowed. It’s also important not to forget your sarong, otherwise the local vendors will sell it to you for three times the price.

Hi, my name is Tatiana, and I’m glad to see you on the Life is unpredictable! I love to travel, and on the blog I share my experiences, tips and other helpful notes.