Architecture and beautiful places in Germany

Almost everyone who has been to Germany has seen the Brandenburg Gate, the Cologne Cathedral, the Berlin Wall and other famous sights. But even beyond these, there is plenty to see in the country as well. We tell you where to go in Germany if you think you’ve seen it all. 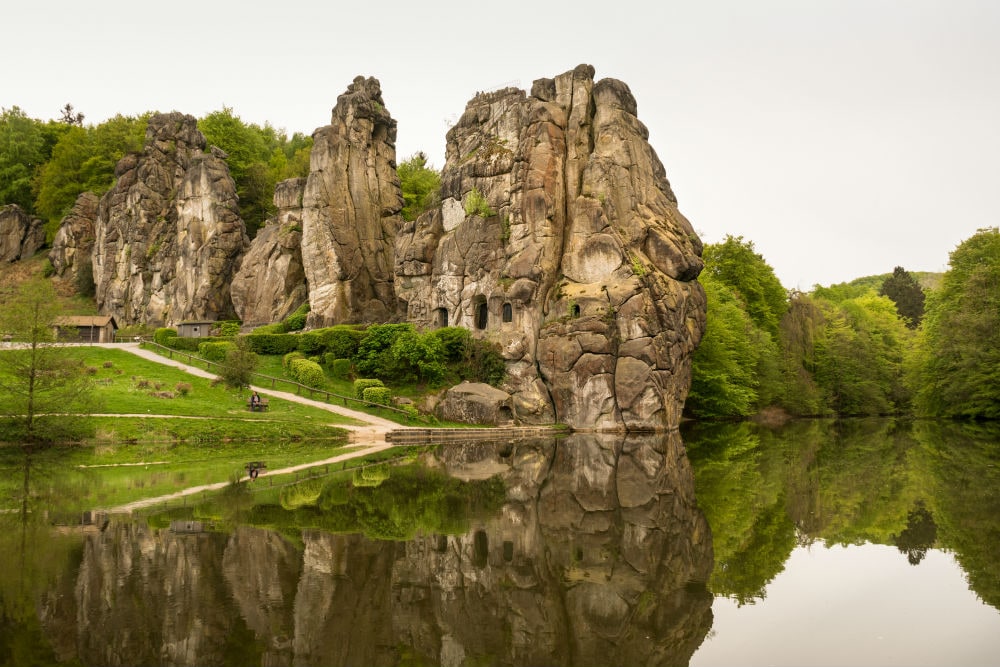 The Exernsteines are a group of rocks in the Teutoburg Forest in north-west Germany, which are shaped like columns and are 30 metres above the ground. According to legend, centuries ago a tribe of sun worshipers lived here. Many passages, stairs and holes were carved inside the rocks, some of them leading to prayer rooms or rooms, others to nowhere. A niche was carved into one of the five pillar-rocks – an altar into which a ray of sunlight falls through a round hole in the rock during the annual summer solstice. The site is now considered sacred by the Neo-pagan worshippers and is a frequent destination for pilgrimages by the worshippers. 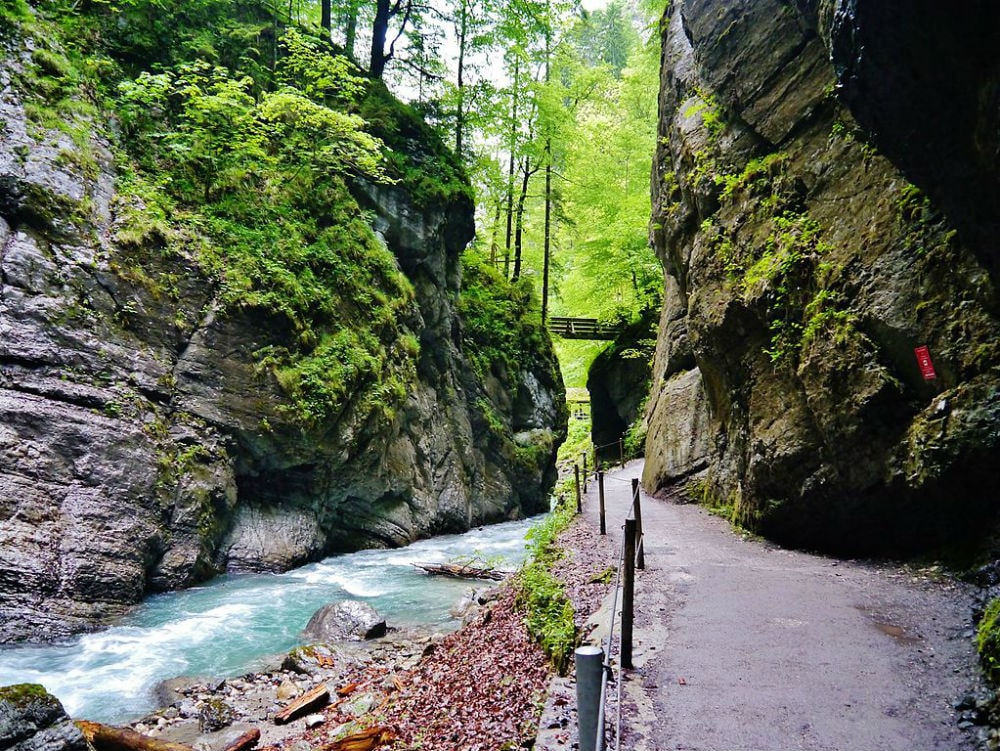 One of Germany’s most unusual natural places, Partnachklamm Gorge, is located on the outskirts of Garmisch-Partenkirchen, a ski resort in Bavaria. On both sides of the winding river, steep precipices have formed that look like something like the “walls” of a corridor. The length of the gorge is about a kilometer, so you can pass it quickly, though, if you do not count the stops to look around and take pictures. After leaving the gorge, you will find yourself in an open area with beautiful mountain scenery. From here you can go up into the mountains on one of the hiking trails or down the cable car. 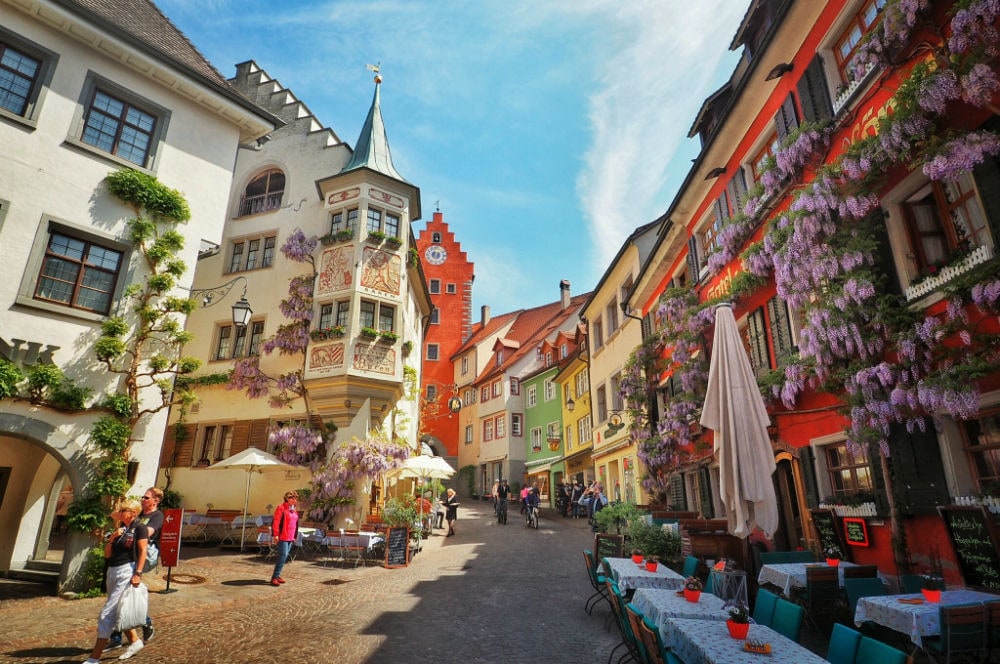 Meersburg is a small town on the shore of Lake Baden in southern Germany. It is known for its completely preserved medieval buildings and the surrounding vineyards and orchards. Here you can walk through the narrow streets decorated with flowers and look out over the azure lake. But the main attraction of Meersburg – the old castle, which has 30 rooms with medieval furniture, clothing and dishes. From the tower of the castle you can see not only on the Meersburg, but also on the city of Constance, which is located on the opposite bank. 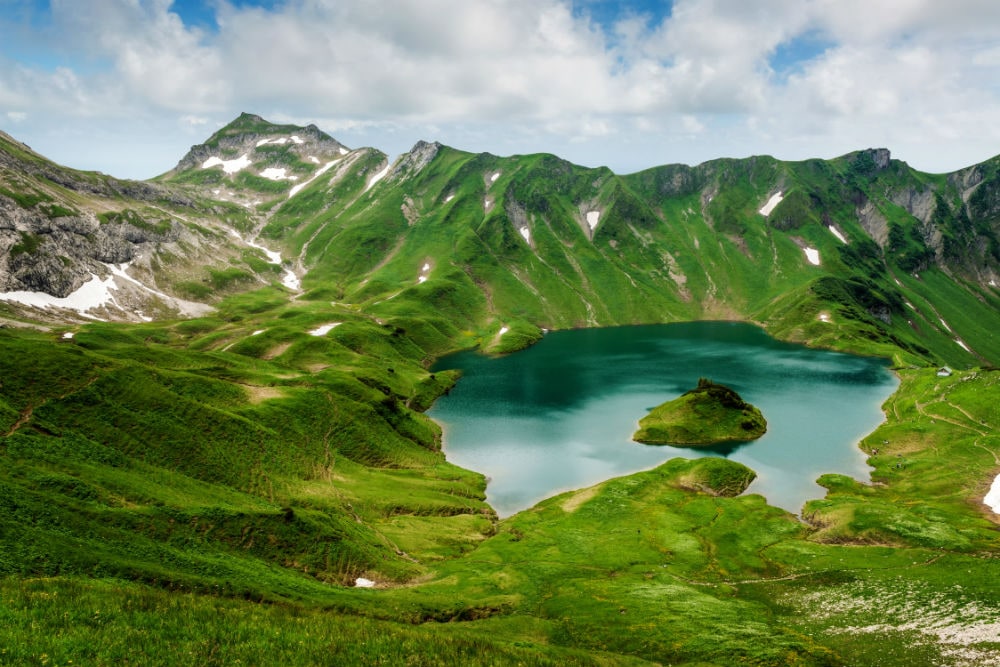 Despite its name, Lake Shreck is not related to the cartoon character except for the color of the surrounding mountains. It is located in the Bavarian Alps and is absolutely untouched by civilization. Even camping is forbidden around the lake. However, some tourists are not deterred by this, despite the fact that the lake can only be accessed on foot – no cable car or pavement here. 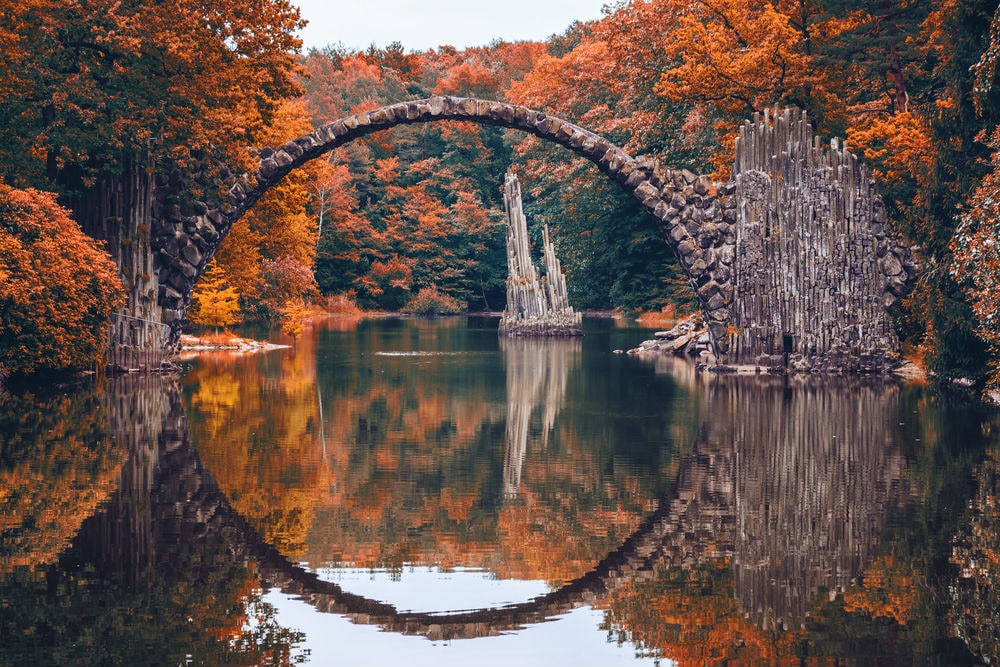 Another picturesque place is located in eastern Germany near the Polish border. It is best to come here at the end of May or early June, when rhododendrons and azaleas are in bloom. In addition, there is one of the most photogenic bridges in the world – Rakotzbrücke (or Devil’s Bridge), built in 1860. It is remarkable because it forms a perfect circle with its reflection in the river. According to one legend, if you sail under the bridge on a boat on a full moon, without looking at your reflection and without touching the water, you can get the fulfillment of a cherished wish. 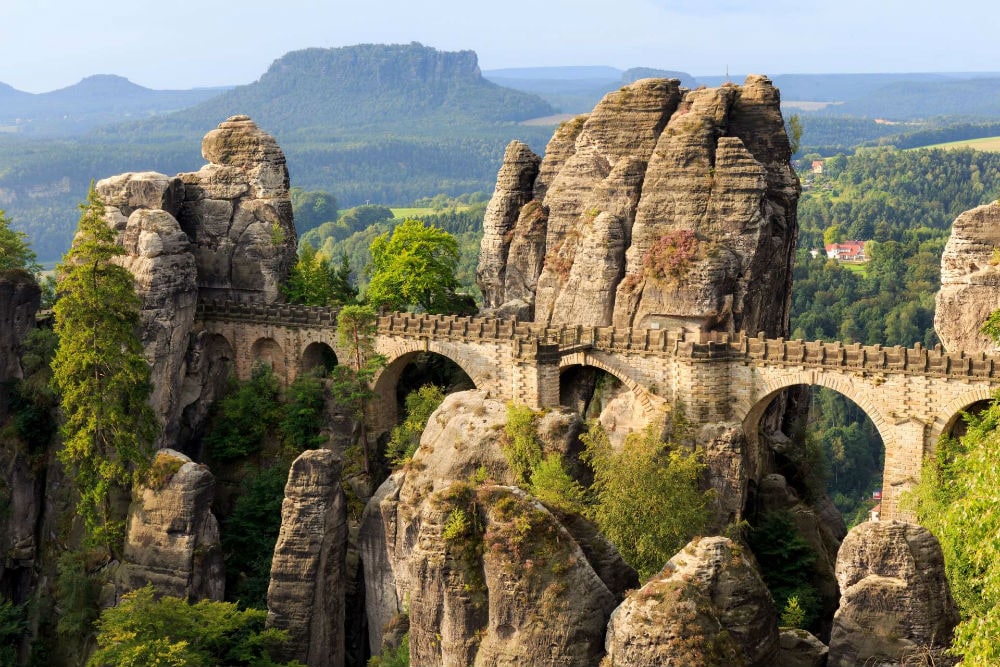 Basteibrücke is a stone bridge in the Saxon Switzerland National Park, located near the German-Czech border. Originally built of wood in 1824, it was replaced by one made of sandstone in 1851. The rocks surrounding the bridge rise above the Elbe River to 194 meters. You can also visit the nearby medieval fortress Königstein, which is located on the mountain of the same name.

The town of Cochem 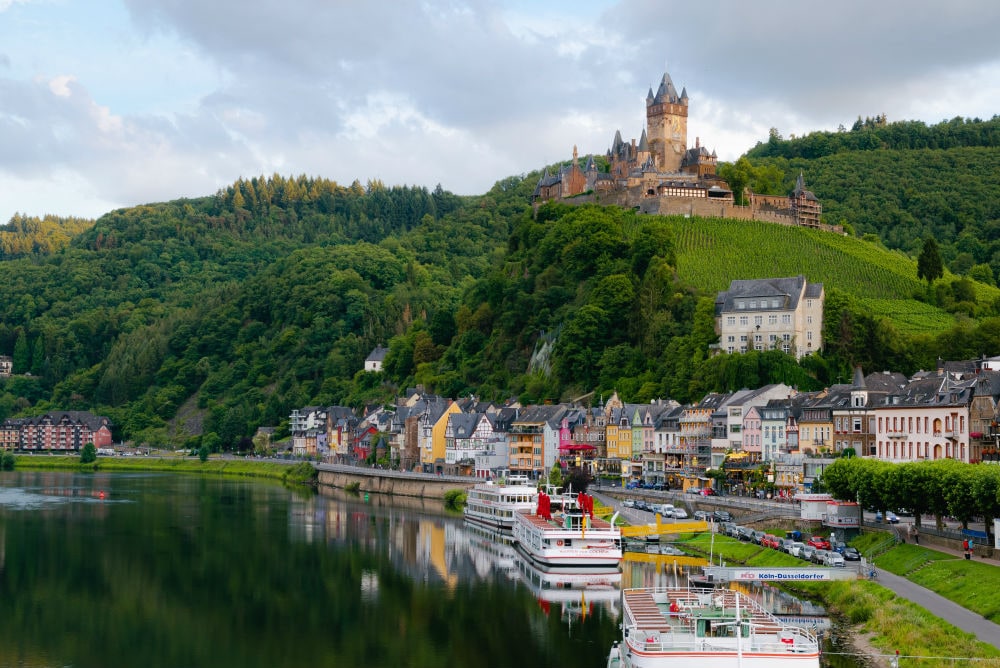 The history of the tiny town of Cochem on the Moselle River goes back to Roman and Celtic times. The first references to it go back to the IX century. The town center has a medieval appearance with its neat half-timbered houses, the town hall, fountain, church and the imperial castle Reichsburg, which was built in about 1020 at an altitude of 100 metres above the town. The town is surrounded by vineyards, which produce the famous Moselle wine. 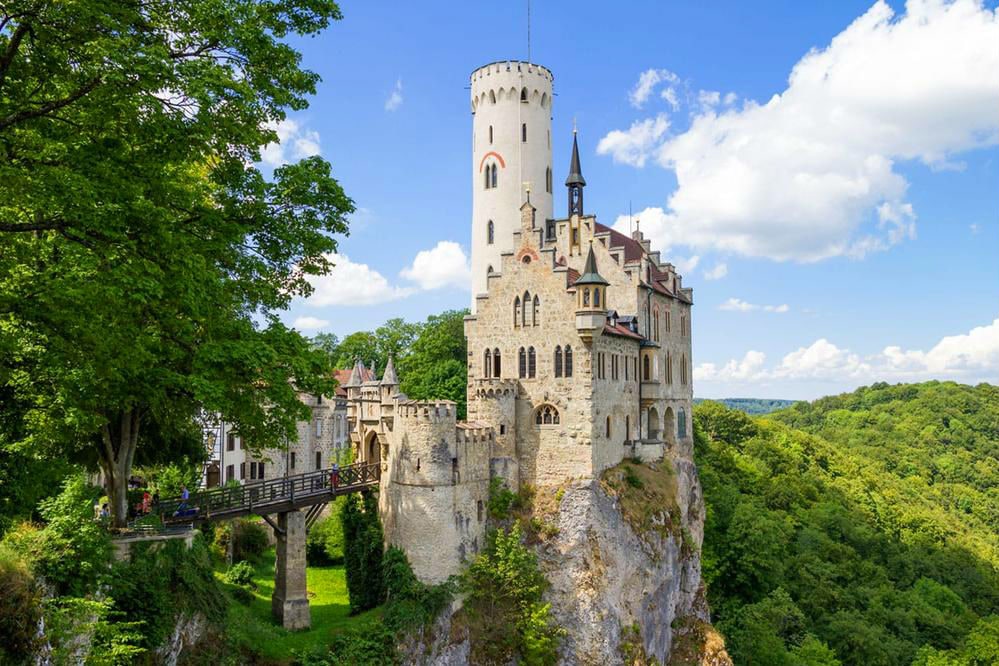 The neo-Gothic Lichtenstein castle was built in the 19th century in the village of Honau. It is located at an altitude of 817 meters. Inside the castle an impressive collection of historical weapons and armor of knights, and not far from it are the ruins of “Old Lichtenstein” – the castle of 1150-1200 years of construction. Lichtenstein offers a picturesque view of the cliffs and the village below. 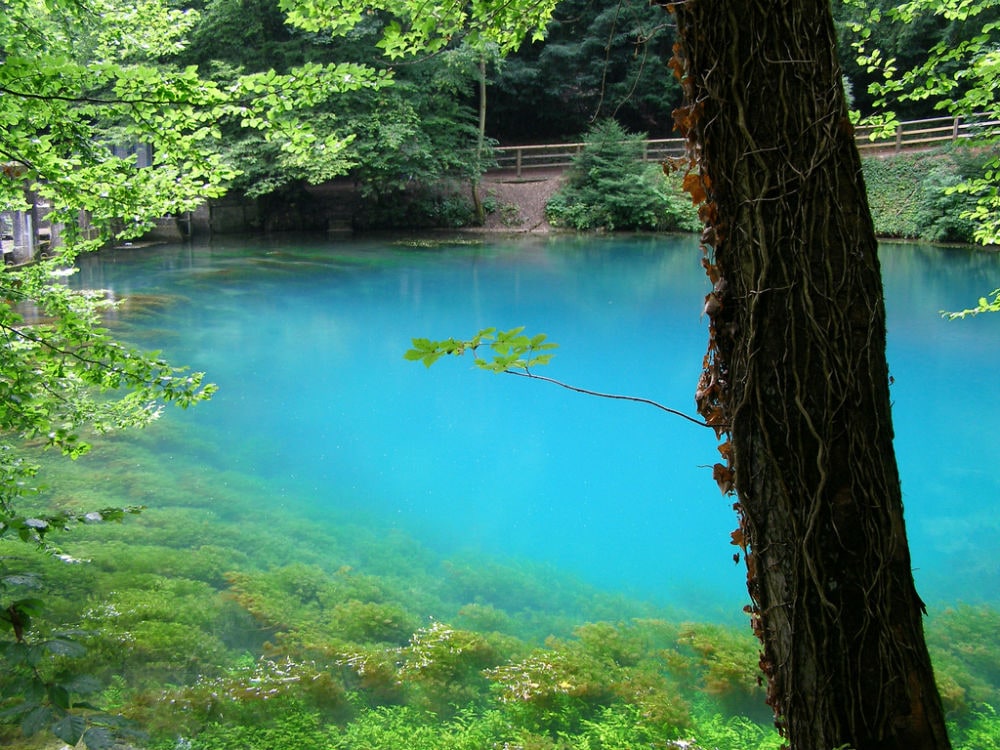 Lake Blautopf is located in the south of the country in the town of Blaubeuren and is famous for its incredibly blue colored water. There was once a belief that the lake turned blue because a barrel of ink was poured into it every day. In fact, this color is due to the scattering of light on tiny particles of limestone, which cannot be seen by the naked eye. The lake is shaped like a funnel about 20 meters deep. And the blue water contrasts beautifully with the surrounding lush trees – it is especially striking in the fall, when the leaves on them turn yellow. 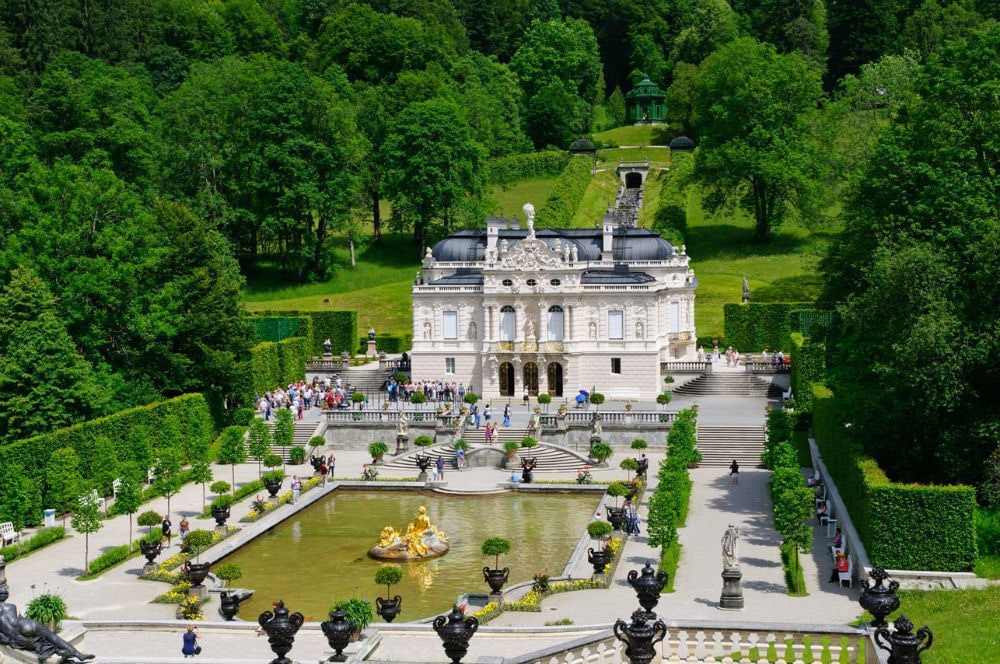 Most tourists to Germany have seen Neuschwanstein Castle, but it is not the only palace worth seeing. Linderhof is the summer home of the same King Ludwig II. It is the only one of Ludwig II’s three castles that was completed during his lifetime, although it took 17 years to build. Linderhof is made in the French Baroque style: to maximize the authenticity of the building, builders and sculptors were sent several times to France. Inside there are 10 rooms, which were painted by the best European artists. At the castle there is a garden with shaped flower beds and a variety of flowers, as well as an artificial lake.

The 20 most beautiful places in Germany

Romantic castles , industrial souvenirs , mysterious parks and magical gardens . In Germany there are many sights worth seeing. Some of them are breathtaking.

READ
Vulcano, Italy: where is it, when to go and what to see 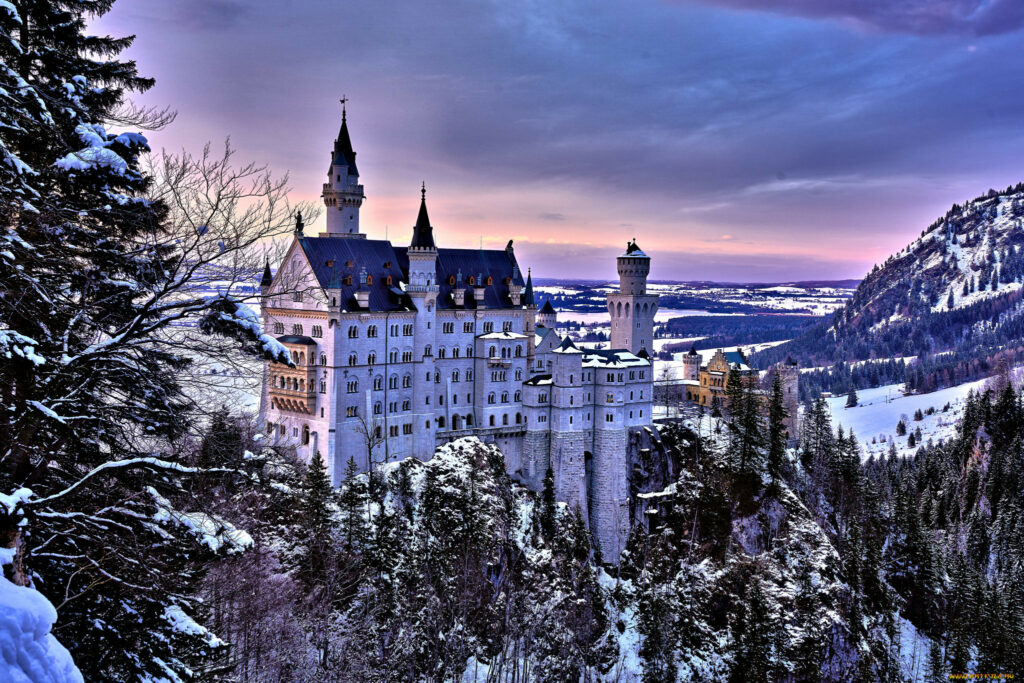 Neuschwanstein is without a doubt Germany’s most photographed castle. It was built in the 19th century and is located in the southern part of Bavaria. It is the most famous of Ludwig II’s castles and is astonishingly romantic. 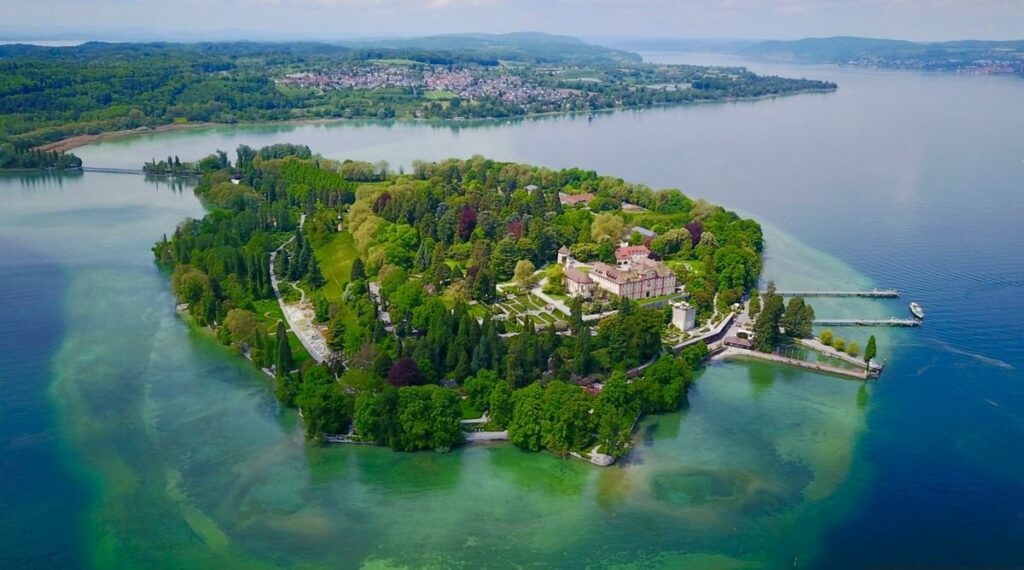 Lake Constance is a UNESCO World Heritage Site, thanks to its natural and monumental proximity. It is located on the border of Germany, Austria and Switzerland. Thanks to the warm winds there are flowers and palm trees growing here and there. The lake has three islands, to which you can go on a cruise or an organized trip: 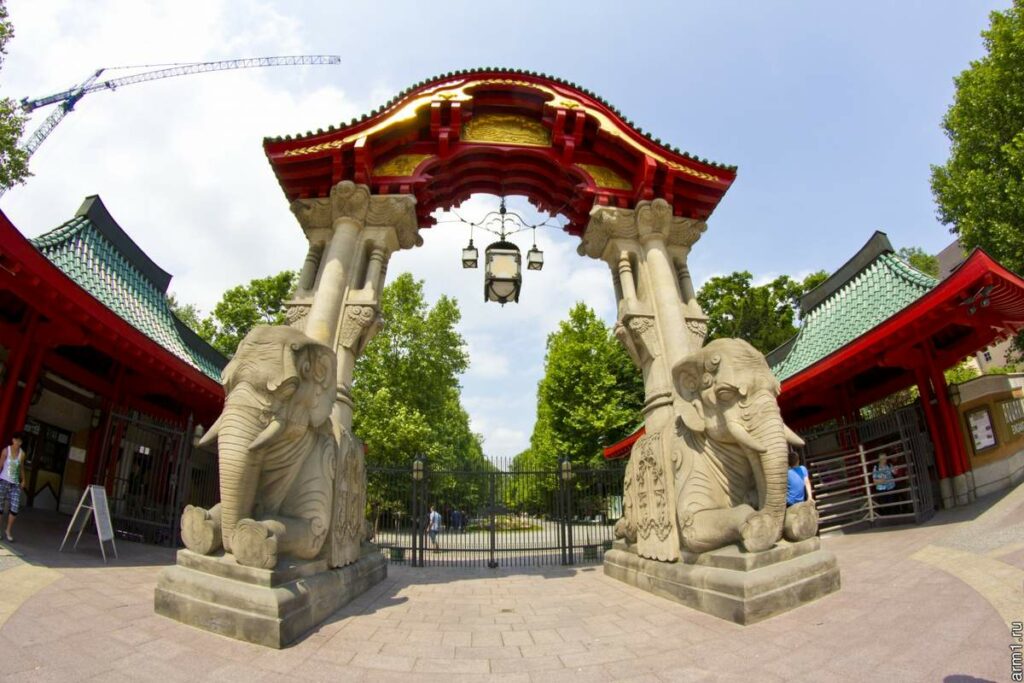 Berlin is the oldest zoo in Germany . It is home to about 14,000 animals . Animals such as elephants, giraffes, gorillas and giant pandas are up close and personal. 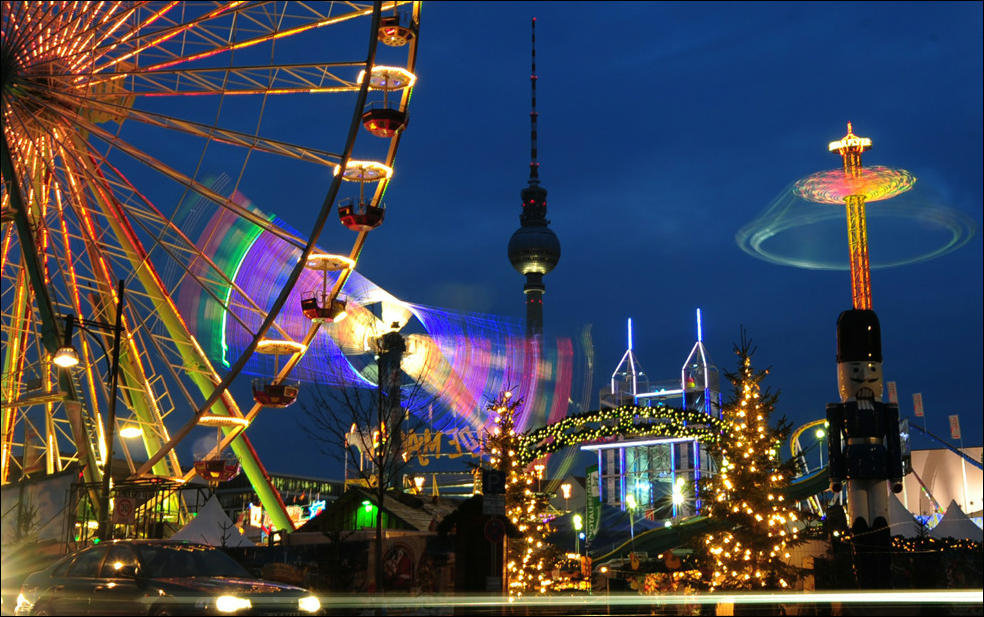 Adrenalin lovers – this ride is for you! The largest amusement park in Germany is located in Rust, in the southwest of Germany, where there are more than a dozen theme zones and roller coasters. The pleasure is guaranteed! 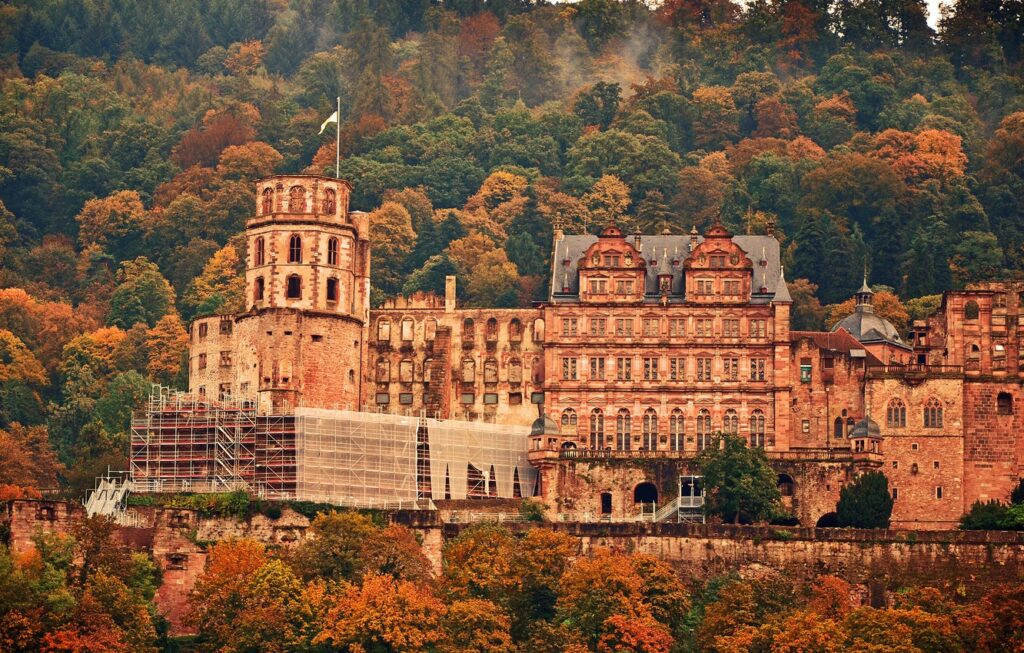 A beautiful castle that attracts millions of tourists every year. It is synonymous with romance. The Gothic and Renaissance castle is built on the slope of the König Stuhl mountain. It is home to the world’s largest barrel Groes Fass . 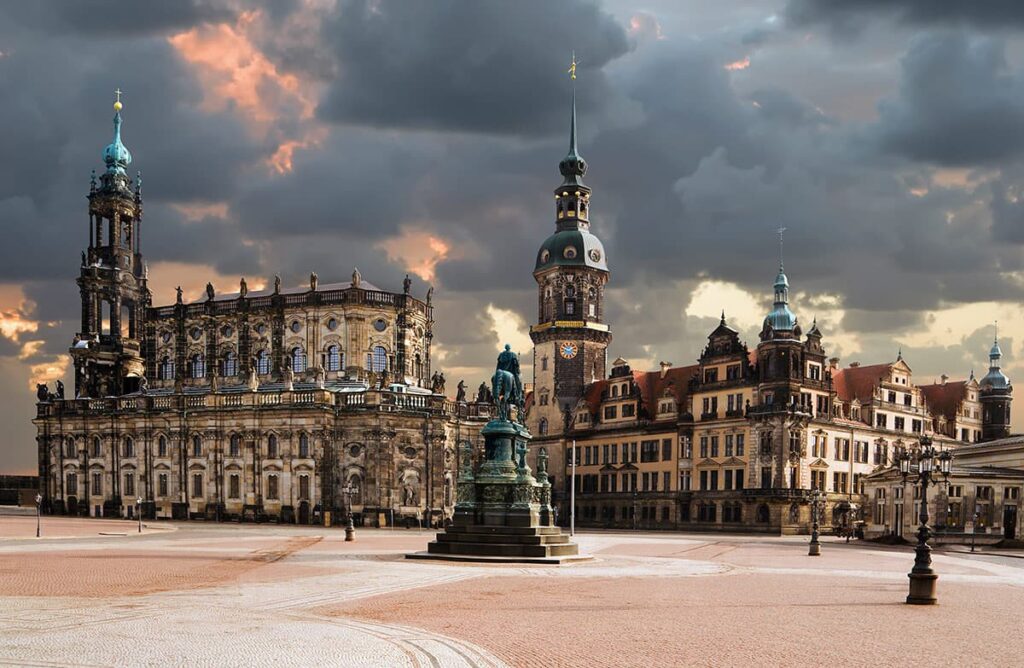 If you are looking for a city full of energy, history and culture, then Dresden is the place to go. Wander through the historic center, admire the old houses and famous monuments, including the Zwinger Palace and the Opera House. 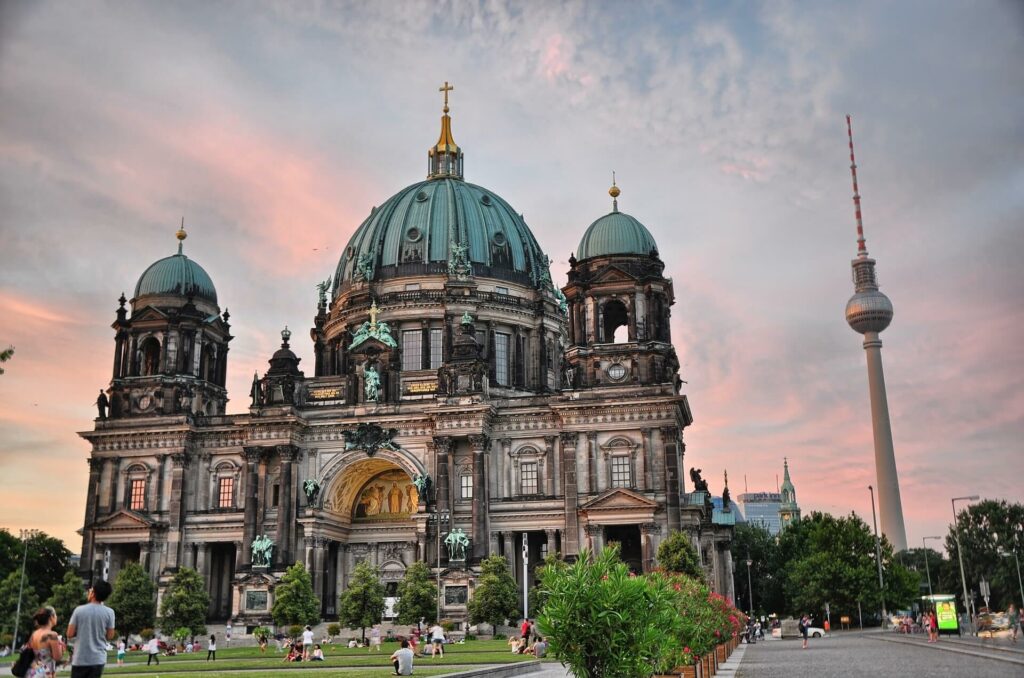 The symbol of Cologne is the Gothic cathedral of Saints Peter and Mary on the river Rhine. Until 1880 the cathedral was the tallest building in the world. 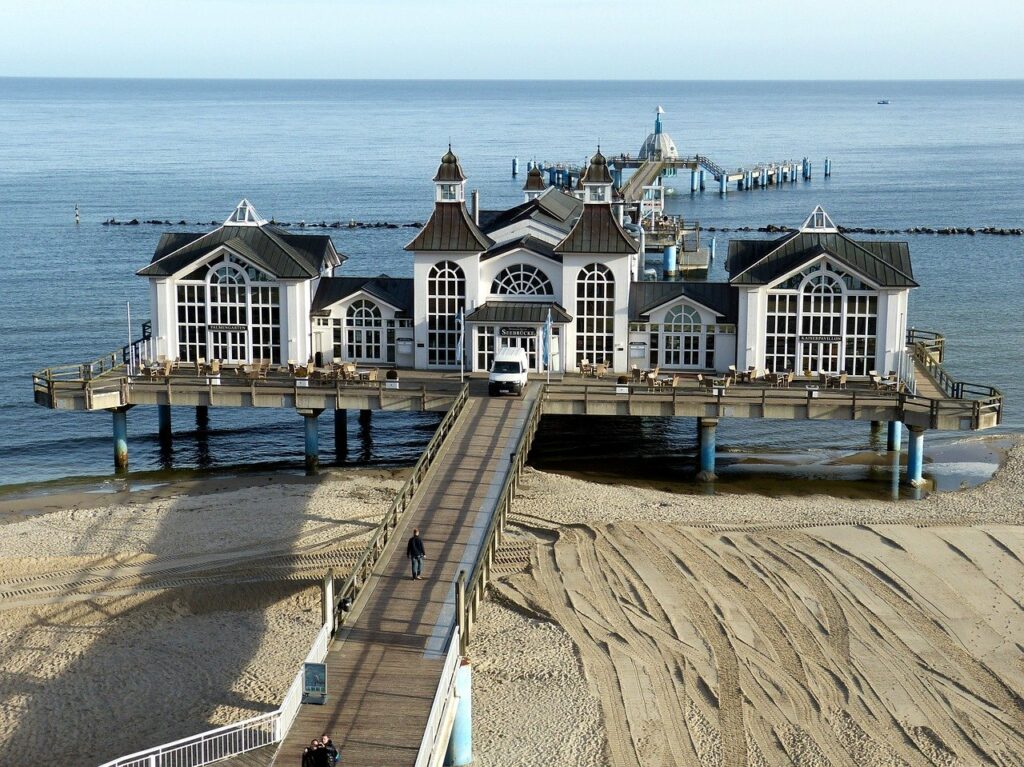 Rügen is the largest island in Germany . It is also an ideal vacation spot. Beaches, unspoiled nature as well as luxurious hotels. 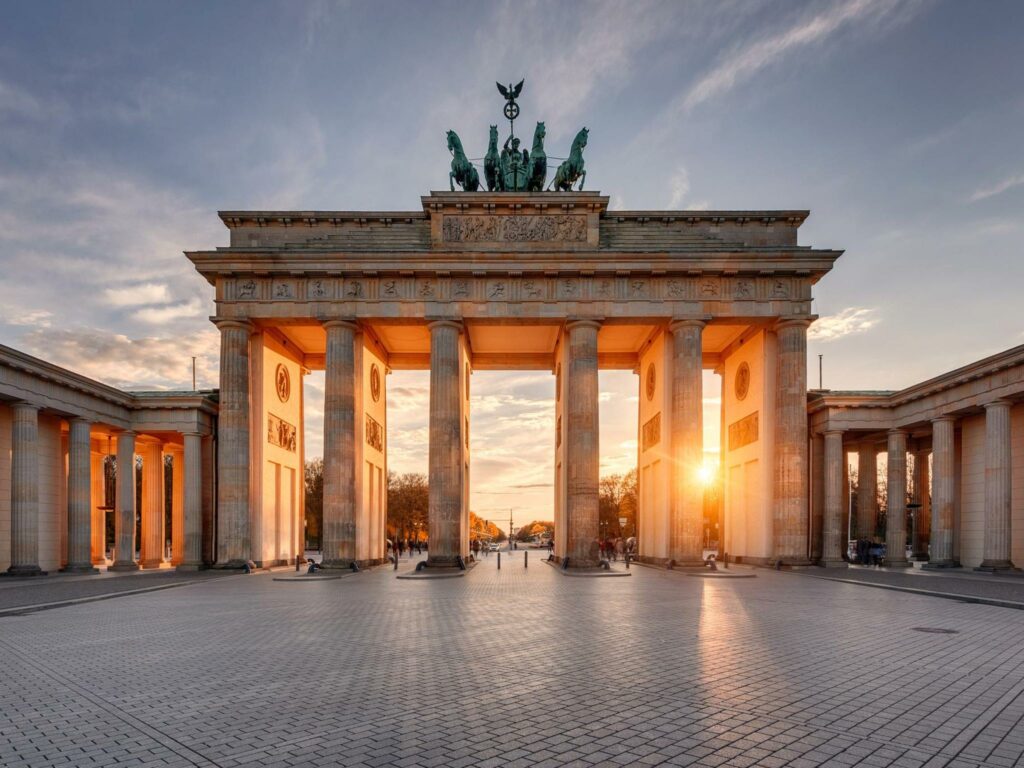 This landmark was built in the late 18th century. It is a symbol of the unification of the German state.

10. Philharmonic Hall on the Elbe 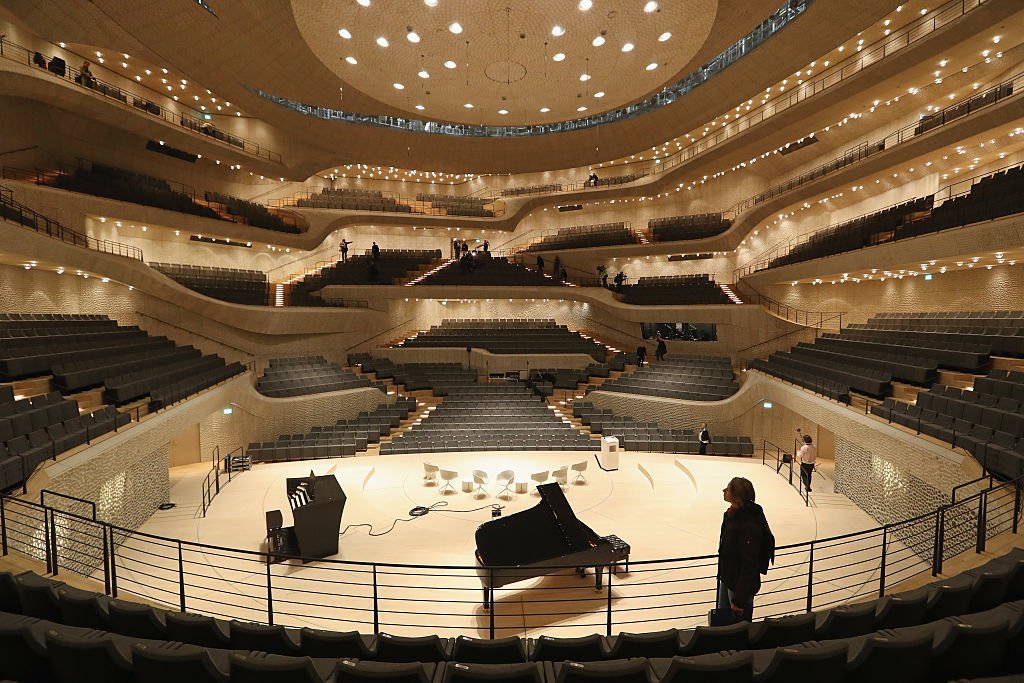 10. The Philharmonie on the Elbe

The Elbe Philharmonic in Hamburg opened in 2016. It attracts attention not only for its acoustics, but also for its appearance. The concert hall seats 2,100 people and was built on the site of old warehouses. Its height is 108 meters, and its roof is supposed to resemble the turbulent waters of the Elbe River . 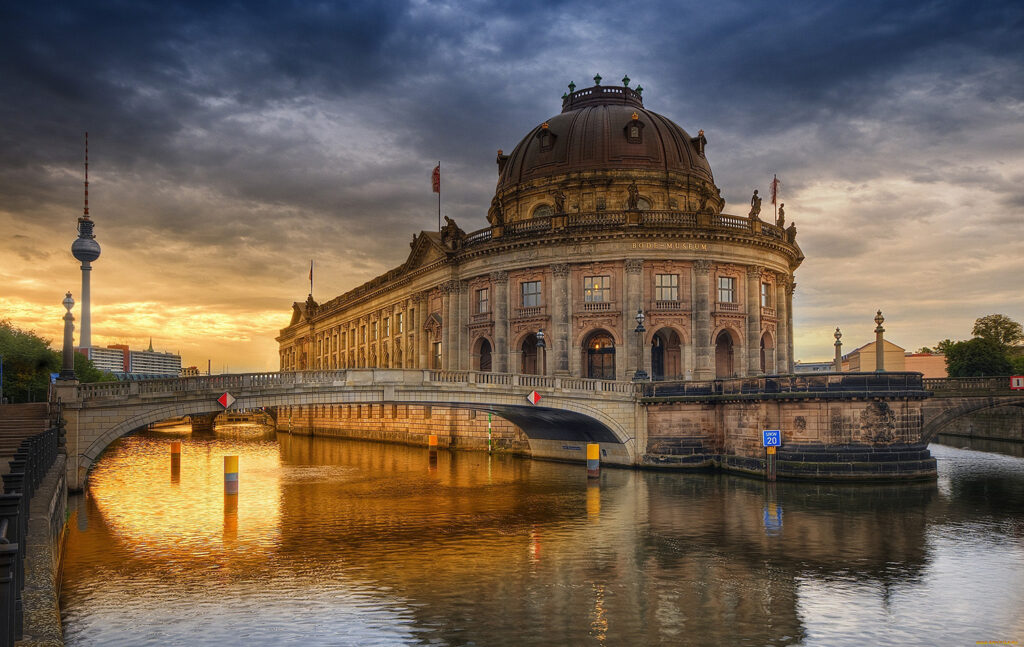 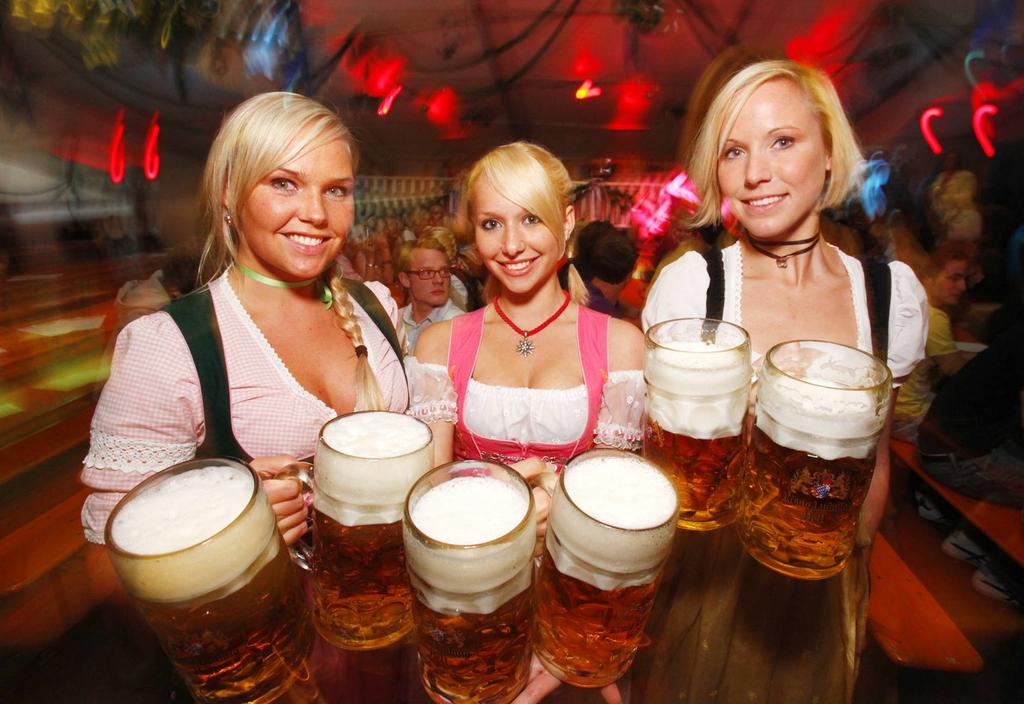 Munich is the city of beer , and Oktoberfest is its holiday . They have been organized since 1810 . Try the local beer in a traditional Makrug liter mug . 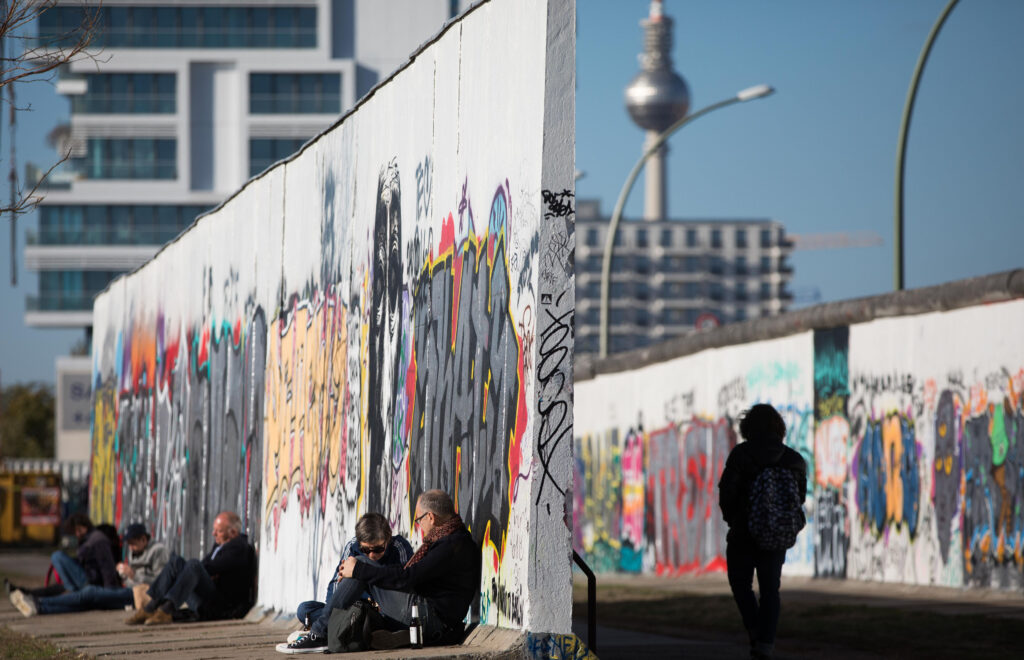 A wall that for 28 years divided the city into two different worlds and made the neighbors foreign. To this day, fragments of the wall are in Berlin and remind us of the past. 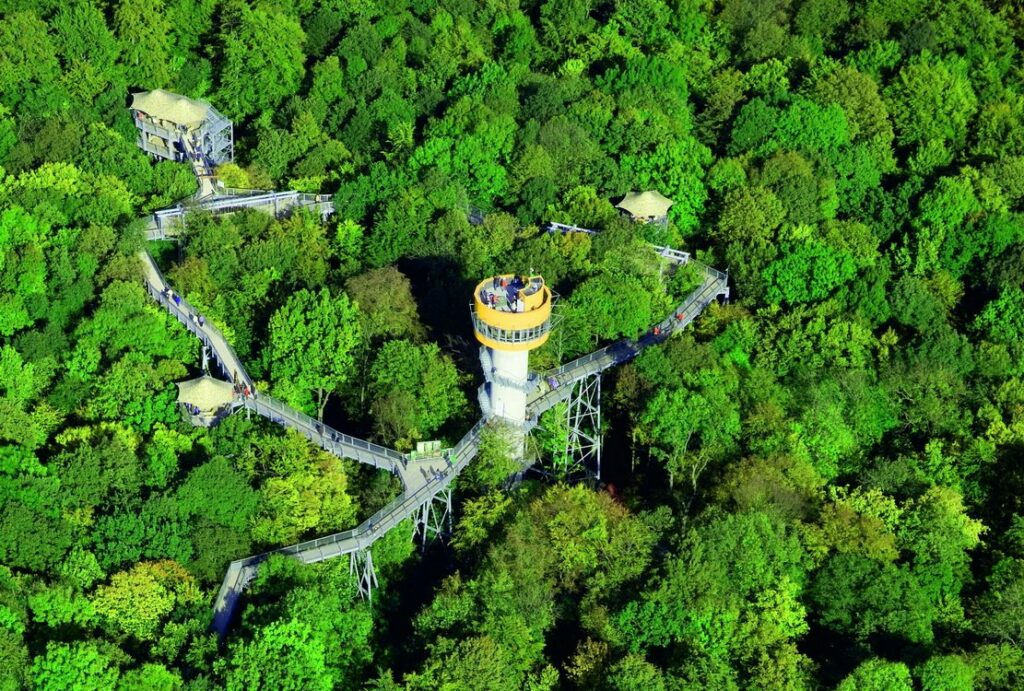 In the heart of Germany, history and nature meet in Thuringia. In the past the park was a military zone, today it is one of the largest deciduous forests in Europe. You can also admire its size by walking on the special sidewalk, which is in the treetops . 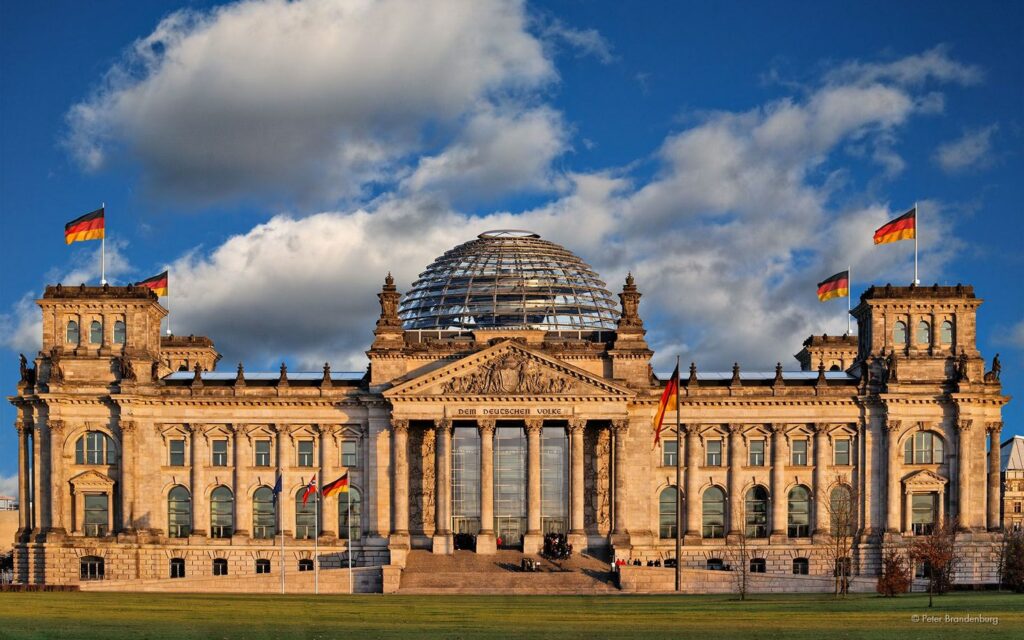 Visit the place where the most important decisions about the state and its citizens are made. The Reichstag is also famous for its architecture: a glass dome with stairs leading to the top. 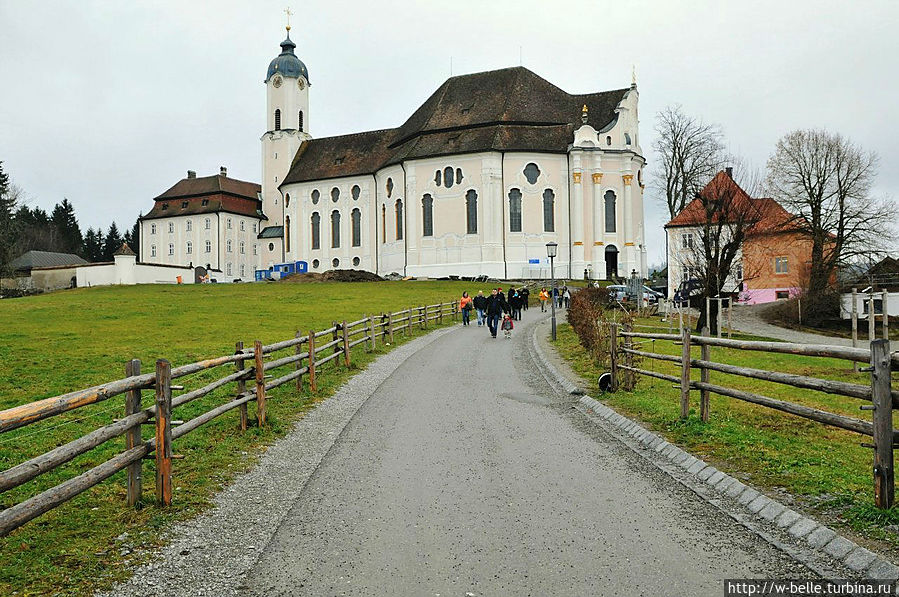 The Pilgrim Church is situated near the Alps, in southern Germany. It is one of the most beautiful Rococo churches in its western neighborhood. Every year more than a million people come here, and not only for religious reasons. 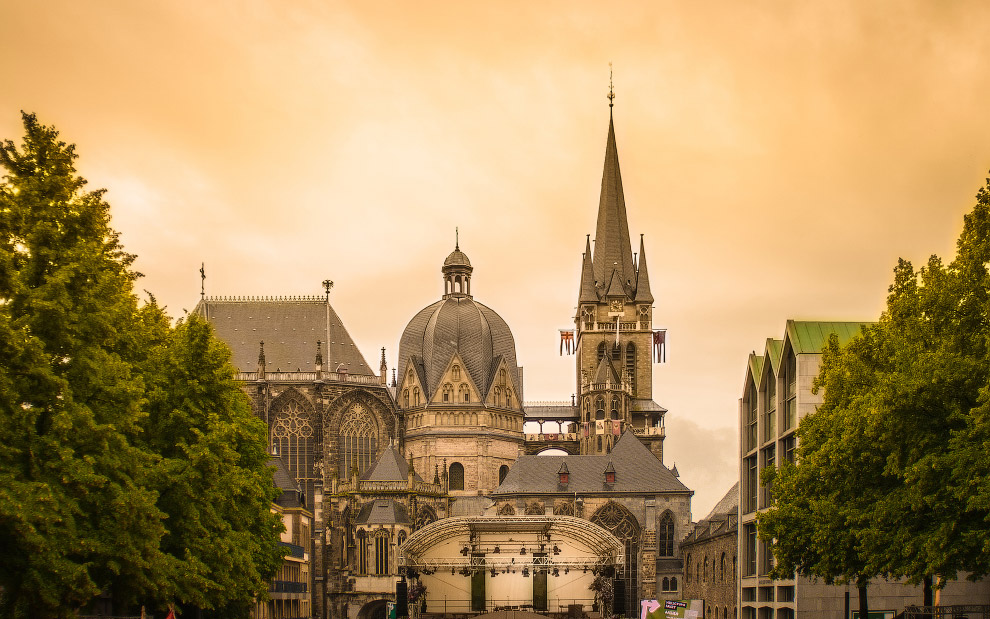 Aachen has a cathedral that was included for the first time in the UNESCO heritage list. It was built in the 8th century and is one of the most valuable monuments in Europe. Rulers of the Holy Roman Empire were crowned here for 600 years. 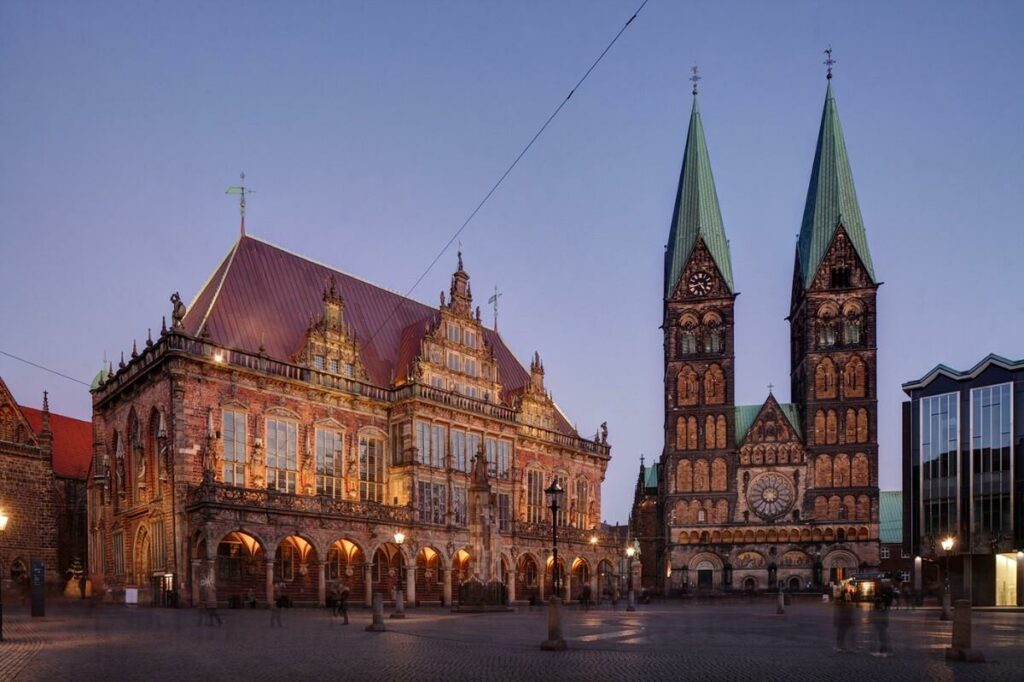 Bremen has one of the most beautiful town halls in Germany. Its original facade is a fine example of the Renaissance period characteristic of the northern part of the country. In front of it stands the statue of Roland, also called “Statue of Liberty”. 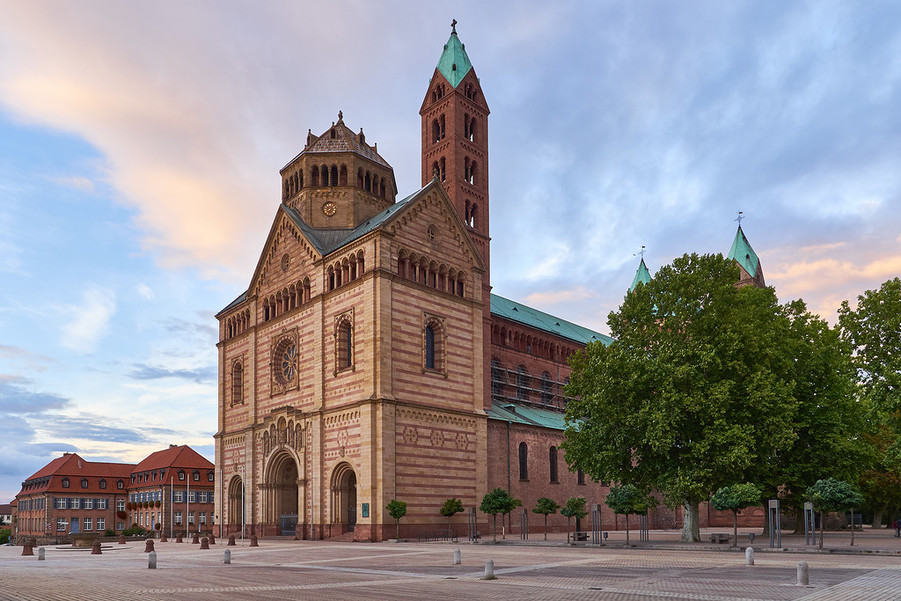 The Cathedral Basilica of the Assumption of the Blessed Virgin Mary and St. Stephen in Speyer is a UNESCO World Heritage Site. Its construction began in 1030 and it is the largest Romanesque church in the world. 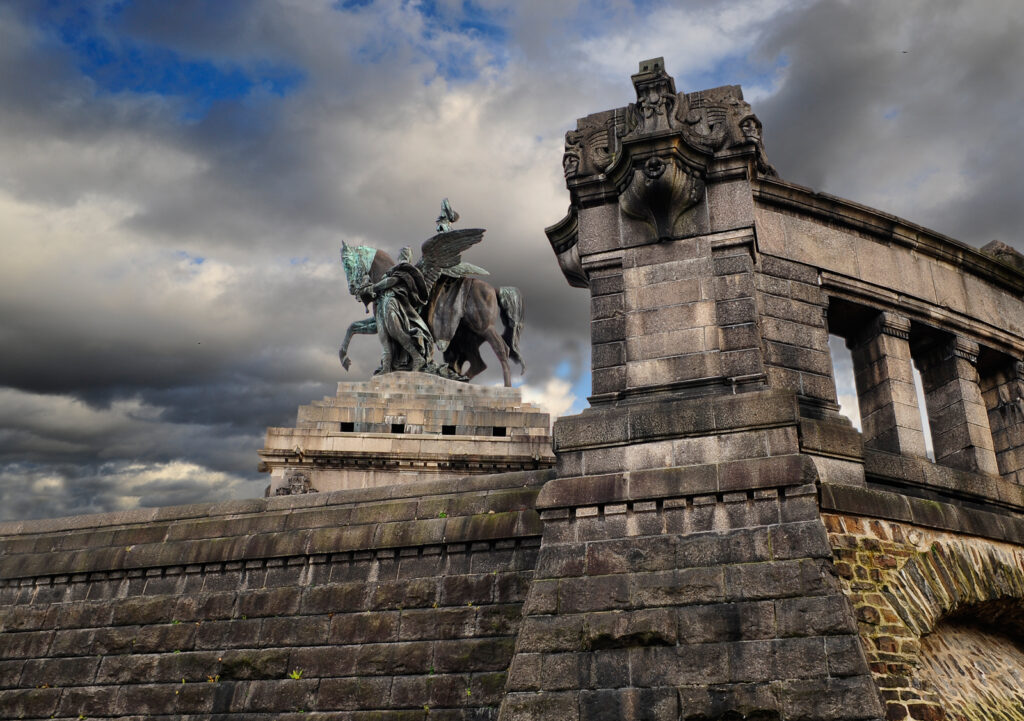 The “Deutsches Eck” (German Corner) is a sightseeing spot at the confluence of the rivers Rhine and Moselle. It takes its name from the knights of the German order. There is also a monument to Emperor Wilhelm I to commemorate the reunification of the German Empire.