Apia, a paradise in the middle of the Pacific Ocean

Apia is the capital of Samoa and a great place with 40,000 inhabitants on the island of Upolu . The city offers a fun vacation with quiet beaches, quaint local restaurants, nightlife and cultural centers. Another important feature of Apia is its proximity to many natural and historical sites, here is a chance to see many beauties around the Pacific Ocean.

– Cultural Village. If you want to learn about the cultural life and traditions of the Samoan people, it’s worth visiting the local village, which is open every day. The knowledgeable and hospitable structures of the villagers will help you learn a lot about this culture. During this visit, when you can see many things, from weaving to woodcarving, from traditional siapo cloth production to tatau production; dance and music workshops are also helpful. The people of Samoa welcome visitors with a special kava ceremony featuring local music and dancing. They also offer all who visit a special meal, which they cook in an oven with hot stones at the end of the ceremony. This village is an ideal place to closely observe and study the habits and life of the region’s past. 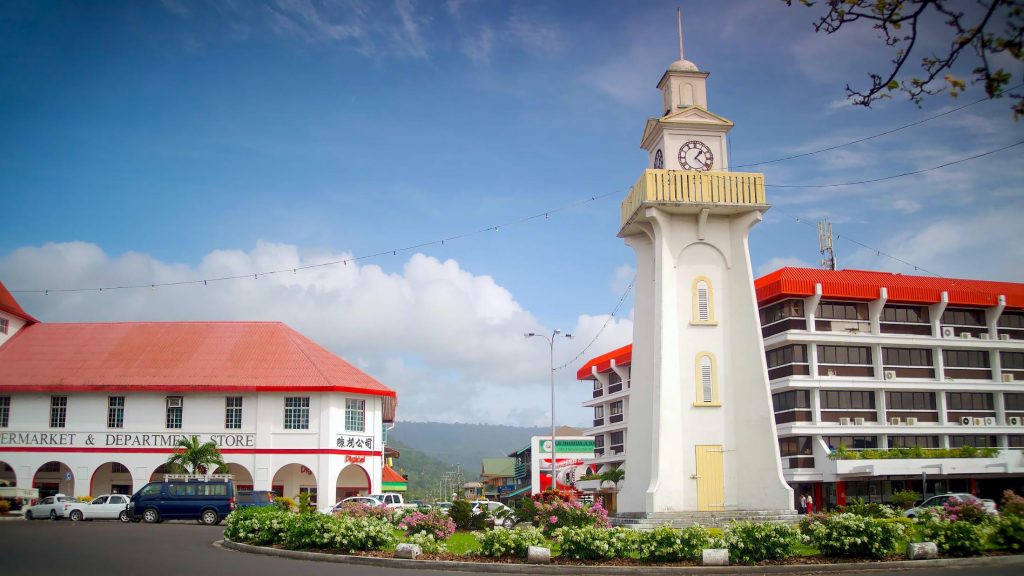 What can I see in Apia?

– Vanya Taule’alo Gallery. Just a five-minute drive from downtown Apia, this small but private gallery exhibits not only work from Samoa, but also from other Pacific Islands. The works on display here are of the highest quality, from prints to paintings, wood carvings to jewelry and other handcrafted items. If you want to return with a nice souvenir, this gallery is one of the best alternatives. Right next to the gallery is Cafe Legend. After a nice tour of the gallery, you can sit nearby in the cafe and try the local desserts. 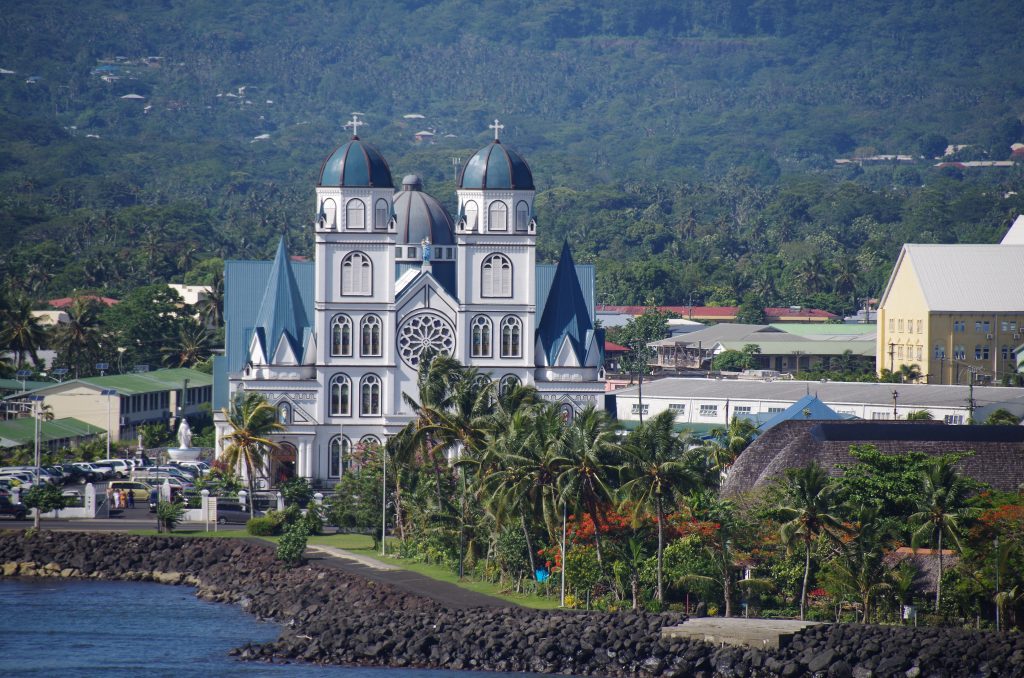 – Fou, an authentic market that impresses tourists with the work of local merchants and artisans, is one of those places that must be visited. Fou offers not only shopping opportunities, but also a social experience . From hunting gear to region-specific fabrics, wood carvings and coconut shell jewelry, from lavender to local clothing called lava-lava, you can find many things at this market, where the priority is the produce market. Here you can relax with cold coconut drinks, which they call niu, as a refresher from the warm and humid climate of the region.

– Falemata’aga, an old school building unique to the German period, now serves as a museum . This fascinating museum focuses on four main themes: history, culture, the Pacific, and the environment; contains information about the history of the region , its culture, and shares a rich heritage of geography that encompasses more than just Samoa. – The Mormon Temple, one of the most impressive buildings in the country, is a gigantic temple spread over an area of 1,736 square meters on the west side of Apia. Built in 2005 after a previous structure collapsed due to fire, it is an Art Deco style building made of white granite and charming with its elegance.

There are no direct flights from Russia to Samoa but there are many flights through America. So this is the first alternative for coming to Apia. Many buses to Apia, 30 kilometers from Faleolo Airport, are waiting for tourists at the airport. Another alternative is the cruise ships that also travel in America; but these ships, which do not make frequent voyages, usually set sail every two months.

Apia, a paradise in the middle of the Pacific Ocean

Apia is the capital of Western Samoa, a state in the western part of the Samoa archipelago in the Pacific Ocean. Archaeological evidence tells us that the Samoan islands were inhabited by Polynesians more than 2500 years ago. The first European to discover the islands during the circumnavigation of the globe in 1721-1723 was Dutch navigator Jacob Roggehoven.

READ
5 things to see and do in Corigliano Calabro, Italy

Save on a trip to Apia!

In 1830 English missionaries arrived in Samoa, and Christianity began to spread rapidly. In the late 19th century, fighting over Samoan ownership escalated between Germany, Great Britain, and the United States.

From 1899 Western Samoa was a German colony. After World War I it became a mandated territory, and from 1947 – a trust territory of New Zealand. Since January 1, 1962 Apia is the capital of the independent state of Western Samoa. It is home to the country’s parliament, state and government institutions.

The capital is located on the northern coast of Upolu Island at the foot of Mount Apia. The city sprawls in a horseshoe along the shores of a bay separated from the open sea by a ridge of coral reefs. The climate in this area is a tropical marine, quite hot and humid, with frequent hurricane winds. The temperature during the year ranges from +24 to +27 degrees. Rainfall averages 3,000 mm per year. The flora of Apia includes more than 600 species of plants.

The largest church of Apia, the Catholic Church, is built in the coastal area of the city. Slightly smaller is the Anglican Church with beautiful stained glass windows and the Christian Congregationalist Church, where the relics of Reverend John Williams, one of the first missionaries to the island, rest. In the center of the Samoan capital, built with one- and two-story European-style houses, rises a clock tower, the Memorial to the Victims of World War II. Of interest is the suburb of the capital – Vallimu (4 km along Beach Road – the main street), where the manor and the tomb of the famous English writer R.L. Stevenson, author of the famous novel Treasure Island, which the islanders called tusitala (storyteller). Two lines from the great writer’s favorite elegy are carved on the tombstone: “A sailor’s home is at sea and a hunter’s home is in the hills.”

In the center of the city is the parliament building, built in the form of a traditional Polynesian oval shaped hut, covered with palm leaves. In Apia there are offices of foreign companies, hotels, banks. A remarkable feature of the capital is a large number of churches. In Apia there is a cinema, a hospital and several schools. The center is built up with houses of the European type, adapted to the conditions of a tropical climate: they have loggias, verandas, shaded windows. On the outskirts of the traditional dwellings – huts, or fale, as they are called here. They are oval in shape, set on wooden poles, covered with leaves of coconut palms, and come with an iron roof. There are no walls, but if necessary the openings between the posts are hung with mats. The floor is lined with coarse pebbles. The inhabitants of the capital wear European clothes.

On the outskirts of Apia is the estate of the famous English writer R. L. Stevenson, author of the famous book Treasure Island. He lived here from 1890-1894 and is buried on top of the mountain overlooking Apia. Stevenson is revered in these parts not only as a tu sigal (“writer of stories”), but also as a courageous and honest man who tried to protect Samoans from the oppression of the colonizers. The writer’s house and the entire estate have been declared a nature reserve. On the territory of the estate is located the official residence of the head of state.

One well-known observatory is Apia, founded in 1902. It carries out research on meteorology, earth magnetism, etc. The observatory has an accurate time service and a seismographic station.

Apia is a seaport and trading center of the country, maintaining trade relations with Australia, New Zealand and the USA. The city’s population is engaged in the manufacture of mats, fans, woven baskets and other handicrafts. In recent years Apia is becoming a famous resort. Tourists are attracted by the beaches and the comfortable ocean bay. An international airport near the capital connects it to the world.