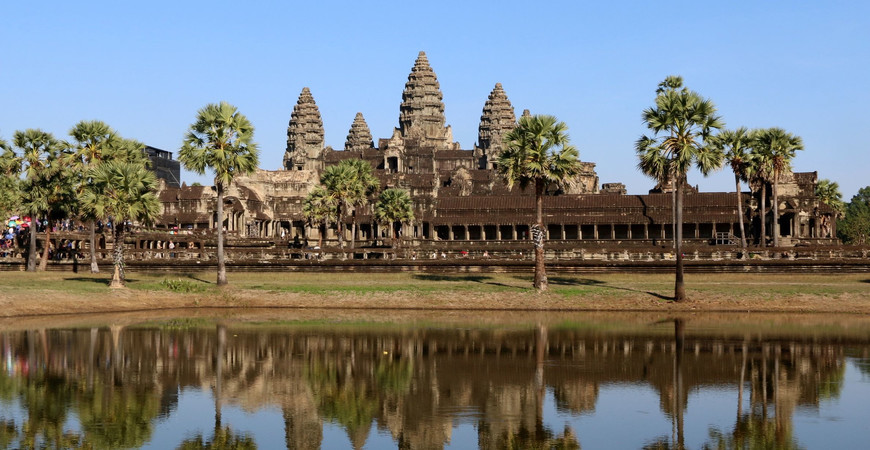 Angkor Wat is a huge Hindu temple complex in Cambodia, often called the “eighth wonder of the world. It is the world’s largest religious building dedicated to the god Vishnu. Angkor Wat silhouette is a national symbol of Cambodia; it decorates the flag and emblem of the state. This bright and expressive example of the architecture of the Khmer Empire attracts many tourists to the country.

The temple complex of Angkor Wat symbolizes the universe and its five towers in the shape of lotus buds symbolically represent the heavenly abode of the gods – Mount Meru with its five peaks.

Inside the central tower, which rises to 65 meters above ground level, is hidden lingam of Shiva, a symbol of the life-giving divine power. Surrounding it are four lower towers with their own courtyards and galleries enclosing them. From any vantage point you can see only three of the five towers of Angkor Wat.

The temple complex consists of three levels with terraces and galleries ascending as one moves toward the central tower. These three levels symbolize parts of the legendary Mount Meru, with the gods living at the top, the people living in the middle, and the demons below the mountain. Angkor Wat is essentially a huge three-step pyramid, surrounded by a huge moat 3.6 km long, symbolizing the world’s ocean.

The walls of Angkor Wat are covered with intricate carvings, among which can be discerned images of deities, battle scenes and many Apsaras – heavenly virgins, according to legends, delighting those who went to heaven. In Angkor Wat you can count more than 2 thousand images of Apsaras, and they all are not repeated. The total area of sculpture of Angkor Wat is about 2 thousand square kilometers.

Many travel agencies offer themed or comprehensive tour with a visit to the temple complex Angkor Wat. Tours can also be booked on the official website of Cambodia tour bureau.

READ
The Papal Palace in Avignon, France. A visit not to be missed

In the X-XII centuries in the ancient capital of Cambodia, the city of Angkor, lived more than 1 million people, according to scientists at the time it was the largest capital in the world.

The rulers of Angkor built huge, carved temples. Each new king saw himself as the center of the universe, so he built his own new large-scale temple, leaving the previous religious buildings on the periphery.

Angkor Wat, whose name translates as “temple city”, was built by King Suryavarman II, who ruled from 1113 to 1150. Work on the huge temple complex took about 40 years and ended soon after the death of the ruler.

Gradually Angkor became a city of temples, but this did not save it: devastating wars, accompanied by periods of drought, led to the decline of the empire by the 14th century. The jungle swallowed up the wooden houses of the poor, and the stone temple complexes have survived to this day, although they have also suffered from the elements and from the roots of trees, braiding the stones and splitting the masonry.

Angkor Wat first served as a state Hindu temple, then it became a Buddhist temple and royal tomb. Earlier the temple was inhabited by monks, so entrance to the complex was forbidden.

In the middle of the 14th century Angkor was conquered by the Siamese and the era of desolation began. Only in 1860 French traveler Henri Muo “discovered” Angkor Wat for Europeans.

After the Angkor complex was included in the UNESCO World Heritage List, restorers began work on the restoration of the temples.

All the mysteries of the temple complex has not yet been solved, scientists continue to explore.

It is still not clear how these temples were built of smoothly hewn stones, not cemented with mortar. The ancient architects managed to make each stone so tight that sometimes it is impossible even to see the seams. Most huge stone blocks are held together without any joints, only under the weight of their own weight. Sometimes there are notches in the joints of stone parts of unknown purpose, and sometimes they are connected “on a spike”, like gigantic puzzles.

To create a giant temple a huge amount of sandstone was used, comparable only to the cost of building material spent on the construction of the pyramid of Chephren in Egypt (that is, more than 5 million tons).

Legend has it that the god Indra helped build this amazing temple. Seeing the virtuous prince, Indra invited him to live in his heavenly palace on Mount Meru. But the apsaras, Indra’s divine dancers, objected to the man’s presence in the palace. Indra had to return the prince to earth by promising to build him an equally beautiful palace on earth.

There are other legends that Angkor Wat was built by other celestial inhabitants – not gods, but representatives of extraterrestrial civilizations.

To visit the temple complex you need to buy a ticket “Angkor Pass”, which is valid for visiting all the temples in the Angkor complex. Tickets are sold at a special tourist center, at the main entrance on the road to Angkor Wat.

When you buy a ticket, the staff takes a picture of visitors and gives you a name ticket with a picture. This ticket cannot be given or lost to anyone and must be presented at the entrance to each temple.

Controllers on duty at the entrance to the historic complex compost the tickets daily.

The Angkor Wat temple complex is open daily from 5:00 am to 5:30 pm. The ascent to the top of the main temple is open on both sides. One entrance is open from 5:00 and the other only opens at 9:30.

Rules of conduct in the temple complex

As of 2015, stricter rules of conduct have been introduced at the Angkor Wat complex.

On the Internet you can find a lot of reviews about the largest temple complex on earth.

Most tourists admire the magnificence of Angkor Wat and call it the unfathomable wonder of the world.

However, there are other opinions. Some visitors complain about the crowded nature of the temple complex. In order to climb the steep stairs to the top of the main tower, tourists have to stand in line for an hour and a half. Experienced tourists are advised to find entertainment during this time, such as taking a photo with locals dressed in colorful national costumes. The fee for such a photo is 1 dollar.

Temple visitors, organized their own tours, without travel agencies, advise to look for a guide in advance, because the Russian-speaking guides in Siem Reap is very few, because of this prices for tours are quite high.

If the weather is clear and calm, tourists are advised to take the opportunity to see the temple complex, rising in a balloon. Such flights are offered near the Angkor Wat complex. The cost of a 15-minute flight is about 20 US dollars.

Citizens of the Russian Federation need a visa to enter Cambodia. Visa on arrival can be obtained at the international airports in Phnom Penh and Siem Reap. In addition, there are several other international checkpoints where tourists can apply for an entry visa on arrival.

To obtain a tourist entry visa, you must:

Tourists can also apply for a visa in advance on the website of the Ministry of Foreign Affairs of Cambodia.

To do this, they need to fill out an application form in English. The applicant’s passport must be valid for at least six months from the date of entry into the country.

Payment for the tourist visa in the amount of $35 USD is made by VISA, MasterCard, Discover and American Express cards.

The visa is processed in 3 business days, is valid for 3 months from the date of issuance, and is intended for a 1-month stay in the country. A confirmation sent to the applicant via email is valid as a visa; it must be presented at passport control.

The way to Siem Reap

Cambodia has three international airports (Phnom Penh, Siam Rip and Sihanoukville), regularly receiving many flights. From Russia it is not possible to fly directly to Siem Reap, but you can book flights from the neighboring cities of Hanoi, Bangkok and Ho Chi Minh City.

If tourists do not come to the country through the nearest airport of Angkor Wat, Siem Reap, you can use the intercity bus, booking a ticket on the official website of the Cambodian Tourist Office.

The historic site can be reached from Siem Reap on a tuk-tuk tuk tuk. This transportation service can be pre-booked with the help of hotel staff.

Experienced tourists note that to move around the ancient city of Angkor is better to rent a vehicle for the whole day, because the distance between the temples is quite large. The distance of travel on the so-called great circle is 26 km, and on the small – 17 km. The car costs twice as much as tuk-tuks, that is $40 per day, but it goes much faster and in most cases is equipped with air conditioning.

READ
Top 5 places where there is no queue for skiing

Parking is located near the bridge, which is the road to the temple complex.