Why do all roads lead to Rome? 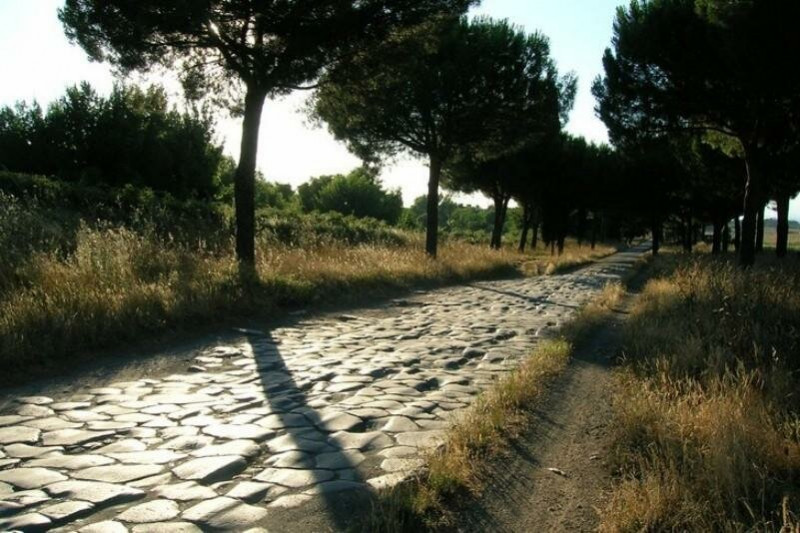 The Romans built roads primarily for strategic purposes so that they could move troops quickly. The first paved road ran from Rome to Capua. It was built under the direction of Appius Claudius Cecus, the censor, in 312 BC. The length of the road, which was so called Appian, was almost two hundred kilometers. Roman historian Diodorus Sicilian noted that the machined stones for the road took almost all the Roman treasury of the time. 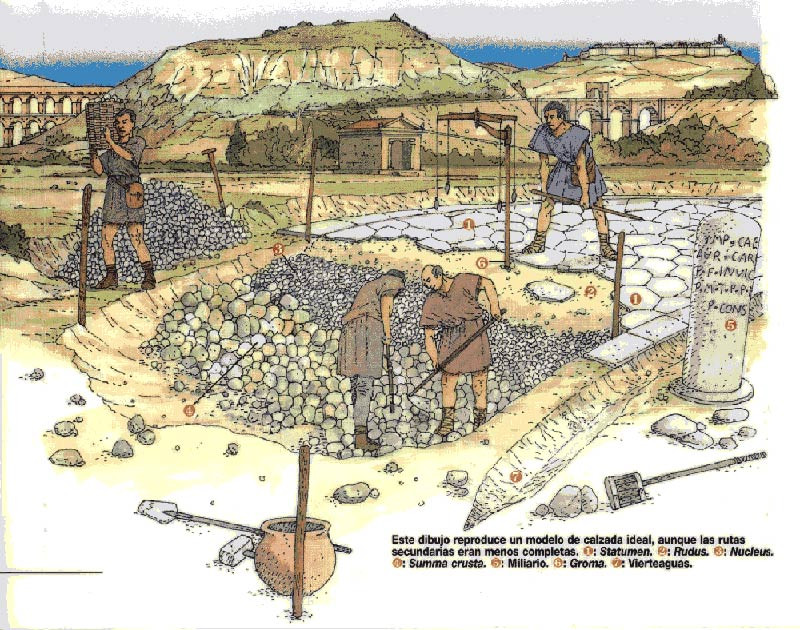 Later on the roads also cost Rome a pretty penny. To control spending on their construction, traditionally the construction of each road was supervised by a censor. The roads were built as straight as possible. All the places of turns were marked in advance and bridges were built at the intersections with rivers. Road planning was a serious business. Before the construction of each section of the road a careful surveying was carried out. Special tools were used for this purpose. For example, “groma”, the predecessor of the angle gauge, was a cross with weights attached to the ends on strings. The gradient was measured by means of a “chorobat”, a ruler about 6 meters long with a groove in which water was poured. The direction was determined by “diopter” – a triangle with a plumb line. 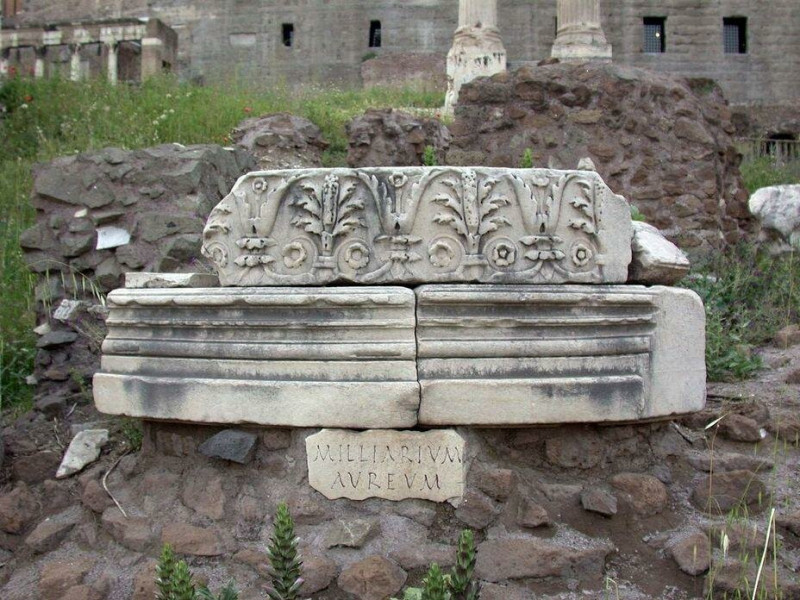 Remains of the base of the “Golden Mile Stone” at the Roman Forum.

Depending on the topography of the area, the road was embedded in the terrain. It was excavated or an embankment was made for it. The ground for this was taken from the grooves on the edges of the future road. The weak ground was strengthened with shoring. The road was to be flat and slightly elevated above the surface so that rainwater could run off it. Sometimes, for particularly important military roads, another track was built in parallel, for riders. Along the roads, there were special stone signs on which the distance to the nearest settlement was indicated. Besides, the name of the emperor, during whose reign it was set, was carved on the stone, which was up to 4 meters high. In 20 BC Octavian Augustus erected the Golden Mile Stone in Rome. It was a gilded bronze column. The names of the main cities of the Roman Empire with distances to them were inscribed on it. A kind of “kilometer zero,” the main point of reference for any distances. 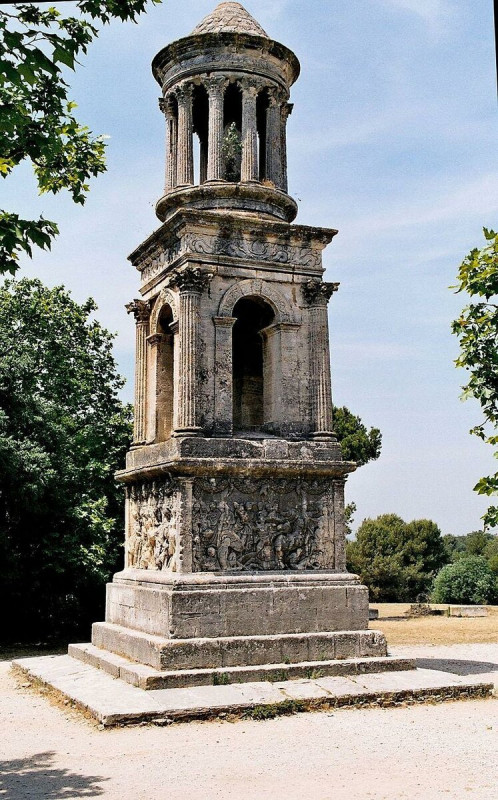 Along the roads warehouses, inns, and post stations were also built. The latter were placed every 10-15 km, so that a messenger could change horses and quickly deliver a message to the addressee. And every 30-50 km there was a large station, where you could rest and sleep. Such station had its own blacksmith shop and tavern. Thanks to this well-organized system urgent news was transferred at a speed of up to 80 kilometers a day. In addition, temples (e.g., in honor of Mercury, the patron saint of travelers), mausoleums, and other monuments were often built near the roads, including those in honor of victories of Roman arms. 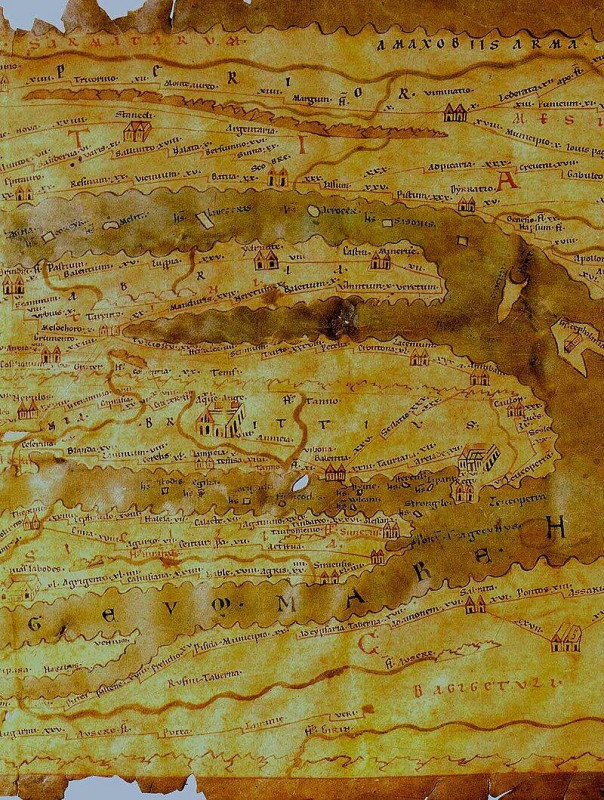 A fragment of the “Pattinger’s Tablet” with images of Roman roads.

The Romans used to draw road maps on special scrolls called itineraries. They contained information about the length of road segments, distances between cities, locations of inns, and descriptions of obstacles along the way. Three Roman geographers, Polyclitus, Theodotus, and Zenodocus, were commissioned by the co-rulers of Julius Caesar and Marc Antony to compile an itinerary for all Roman roads. They labored for more than a quarter of a century. The result was engraved on a slab of stone and displayed in the capital near the Pantheon. Even more famous is the “Tablet of Patinger”, which came down to us in the form of a copy taken in the XIII century. This map of the Roman roads was constantly supplemented up to V century AD, its total length is almost 7 meters. The total length of Roman roads, shown on it, is 200 thousand kilometers. 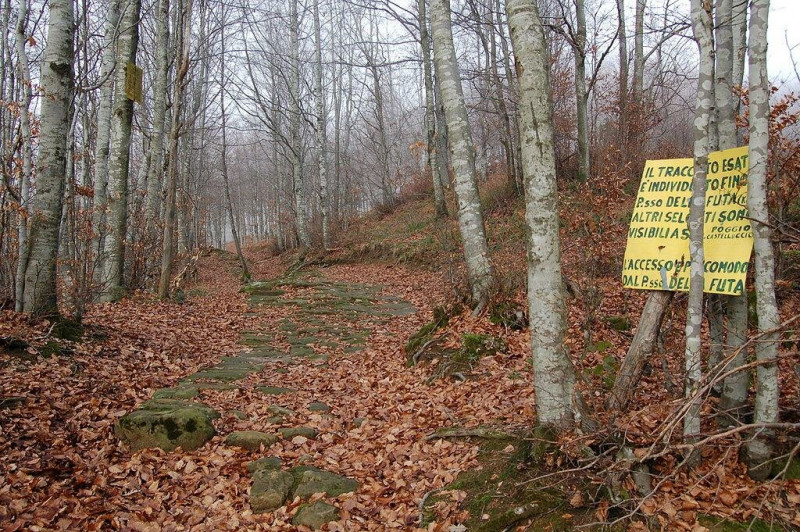 The saying “All roads lead to Rome” meant a very simple thing – any one of the Roman roads could eventually reach the capital of the Roman state. It was the roads that united the vast expanses of the empire and, at times, the countries yet to be conquered by the Roman legions. For every new province, the Romans built a road and then built new cities and other settlements along these roads, built market squares, and put up fortifications for defending themselves against barbarians. Without Roman roads, there would be no Rome as we know it.