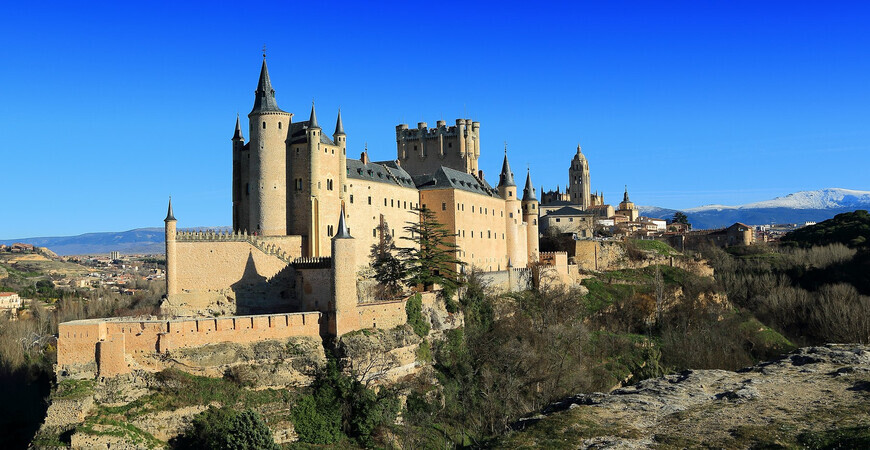 Alcázar is a word of Arabic origin which means “castle” or “fortress”. This name is carried by castles in Spain and Portugal built in Arab times (Ⅶ-ⅩⅣ centuries), as well as palaces in the Moorish style of later construction. Alcázars in Segovia are also known in Toledo, Seville, Madrid, Cordoba and other cities.

A fortified settlement on the site of the castle in Segovia existed long before the Arabs, in Roman times. The excellently preserved aqueduct belongs to the same era. The first written mention of the castle dates back to 1120, by which time the Moors, defeated by the Catholics, had already left Segovia. The fortress was made of wood until the reign of Alfonso. King Alfonso the Noble, who ruled Castile for 56 years, began the construction of a stone castle and made the Alcázar his residence.

The castle is now one of Segovia’s most popular tourist sites, along with the aqueduct and the Cathedral. Since 1953 it has housed a museum. The 11 halls show the interiors of the royal castle, displaying furniture, weapons, armor, and portraits of monarchs. At the tower of Juan Ⅱ is an observation deck, with beautiful views of the surrounding scenery.

History of the fortress

As Segovia’s royal residence the Alcázar not only served as a key defensive fortress for generations of monarchs, but also as the seat of the treasury, archives and the royal arsenal. Under King Juan Ⅱ and his son Henrique Ⅳ the castle was richly decorated and became the center of the political life of the monarchy. The fortress appears in the fortunes of the great Isabella of Castile, whose reign is associated with the discovery of America by Columbus and the darkest pages of the Spanish Inquisition. It is believed that it was here in 1469 that she was secretly married to her husband, King Ferdinand, and in December 1474 Isabella hid in the Alcázar until she was supported and crowned in the central square of Segovia after the death of Enrique Ⅳ. In the hall of the Galleria hangs a pictorial painting depicting Isabella’s coronation.

READ
What to see in Borghetto sul Mincio, Italy

During the reign of Philip ⅡHabsburg in the second half of the ⅩⅥ century the Alcázar in Segovia was rebuilt to resemble the medieval castles of Central Europe, losing the Moorish features of the Mudejar style and, after the royal court moved to Madrid, became a state prison for 200 years. Only in 1762 the Royal Artillery School was opened in the castle, which existed for 100 years until the great fire of 1862. The roofs of the castle were destroyed by fire and the interiors were burnt out. In the late ⅪⅩ century, the Alcázar was restored to house the Main Military Archives, which still occupy the upper floors. In 1953 the castle became a museum.

Architecture and decoration of the royal castle

The oldest part of the Alcázar begins at the Court of Arms, the inner courtyard of the castle. From there you can enter the Old Palace Hall. This part of the castle was built in the Ⅻ century during the time of Alfonso Ⅷ. A wall with double window openings has been preserved. The fireplace room dates from the time of Philip Ⅱ’s alterations. The impressive frieze in the Royal Hall shows the 52 monarchs of Asturias, Leon and Castile.

The “court mudejar” style is most clearly represented in the Throne Room, the Galeria Room, the Hall of the Cord and the Hall of the Cones. “Court Mudejar” is an artistic style retaining Moorish features, but reworked and adapted to the religious and cultural perceptions of Catholics, displaying flamboyant elements of luxury and wealth. The name comes from the Mudéjar, the Muslims who remained in Spain after the victory of the Reconquista, gradually expelled or forced to convert to Christianity (Moriscos). Mudejar architecture is the work of Moorish masters, whose traditions were also adopted by Catholic builders. In time, by the end of the ⅩⅥ century, the Mudejar, Gothic and Spanish Renaissance merged.

READ
Bieszczady - unique mountains, of which few people have heard

Traveling through the halls of the Alcázar, you can see the royal bedroom and a small house chapel . At the base of Juan’s Tower is the Armoury, with a large collection of armour and weapons from different eras, as well as a small room with an ancient coin press and treasure chests.

You can take a virtual tour of the castle on the museum’s official website.

The ticket office closes half an hour before the museum closes.

Full ticket costs 9 euros, students, seniors, children from 6 to 16 years, disabled and large families pay a reduced price of 7 euros. Free admission is provided for children under 6 years. At the ticket office you can get an audio guide, it costs 3 euros. For the opportunity to join a tour, which goes through the castle every half hour, you must pay an additional 2 euros. Payment can be made in cash or by card.

On the website of the museum is available to book group tours and individual guided visits.

Segovia is connected by road to all neighboring cities and the capital. It takes about 1 hour by car from Madrid and 30 minutes by high-speed train.

To get to the Alcazar by car from the Spanish capital without using the toll roads, you have to leave Madrid on the M 607 towards Navacerrad, then take the winding but beautiful M 601 to Segovia. There are only two free parking lots in the old town area. The closest one to the castle is at the Paseo Ezequiel González traffic circle, from which it takes about 20 minutes to walk along Calle de San Valentín to the castle.

READ
Things to do on St. Kitts and Nevis

The old city is mostly pedestrian, parking in the blue and green areas is paid, the movement by car in the narrow streets is limited. But walking allows you to get to know the city better. For those who find it difficult to walk, the circular bus route No. 10 will come in handy; it makes a stop near the Alcázar Palace.

Another way to get to Alcázar is by intercity buses. They come to the Segovia bus station, located in the center of the city. From there to the castle you have to walk 1.4 km in a northwesterly direction.