Afghanistan is a country of primal natural beauty. It is home to Zarathustra’s birthplace, centuries-old mosques and citadels. However, not all sights survived the 30-year internecine war, and some of them remain only ruins. 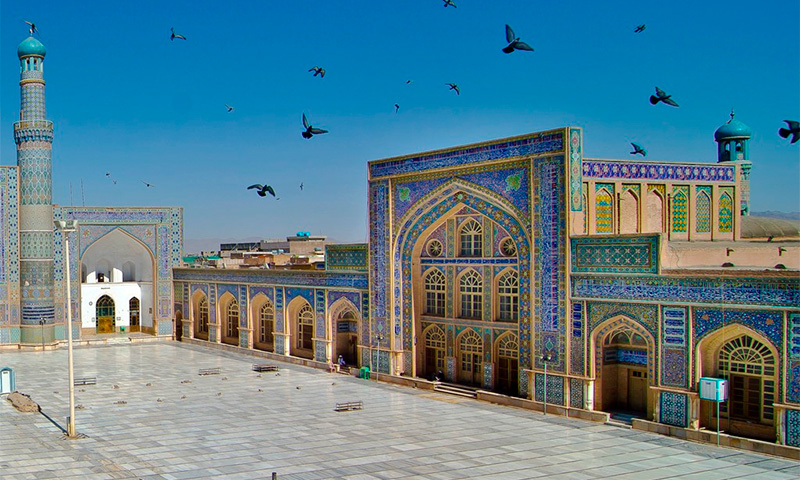 Who goes to Afghanistan and why

Afghanistan has no modern entertainment, noisy parties and extreme attractions, but a lot of beautiful natural sights, ancient temples and picturesque places.

The country will definitely appeal to tourists who prefer to explore and examine religious monuments. They should definitely visit the Blue Mosque and Juma Mosque, Abdul Rahman Mosque and Pul-i-Hishti.

Fans of ancient architecture will be interested to see the Red City of Shahri Zohak, Buddha statues in Bamiyan Valley, Babur’s Garden and Lashkari-Bazar.

Among the sites of secular cultural heritage tourists stand out the National Museum and Jihad Museum.

But the most beautiful and unique natural attractions, capable of impressing any tourist: Blue Lake and Khyber Passage. 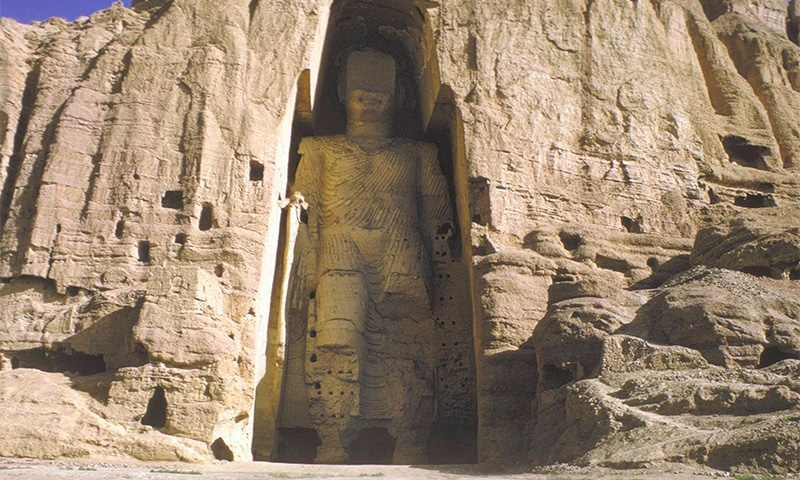 Huge idols 37 and 55 meters high stand in the Bamiyan Valley. The figures are carved directly into the rock, fragmented with sturdy plaster and held on wooden reinforcements. The upper parts of the faces, also once created of wood, disappeared several centuries ago. Installed around the sixth century, some of the idols were destroyed by the Taliban in the 2000s.

Not far from the statues is the town of Bamiyan – the center of the district of the same name. Here in ancient times took place a trade corridor, and since then have remained Buddhist monasteries, the ruins of the ancient city of Gaugale and Muslim fortresses.

“The Blue Mosque or Ali Mausoleum 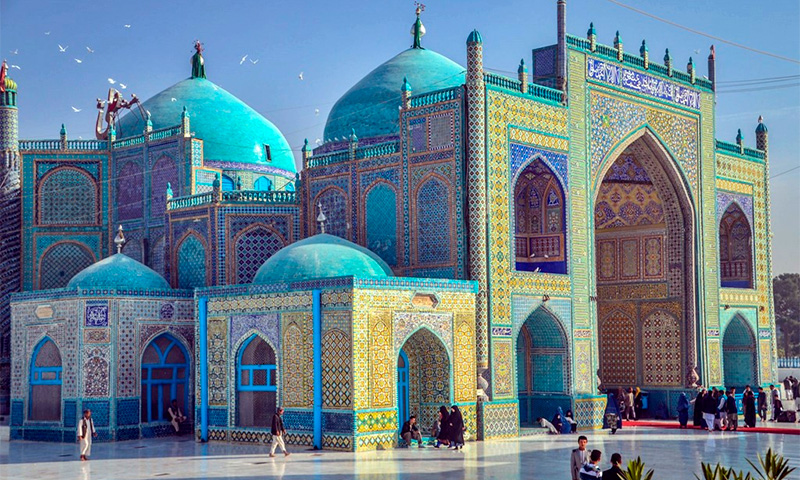 Unique mosque is located in Balkh district, where according to archeologists’ research in XII century caliph Ali was buried, who was considered cousin of Prophet Mohammed. The mausoleum itself is already in the XV century built by Hussein Baykara, calling his creation Mazar-e-Sharif (in Persian – “Tomb of the Holy”). The second name “blue” it received because of the huge number of colored details on the walls and ceiling.

The mosque is one of the oldest monuments in Afghanistan and is relatively well-preserved compared to the others. Not only Muslims but also representatives of other religions are allowed inside. 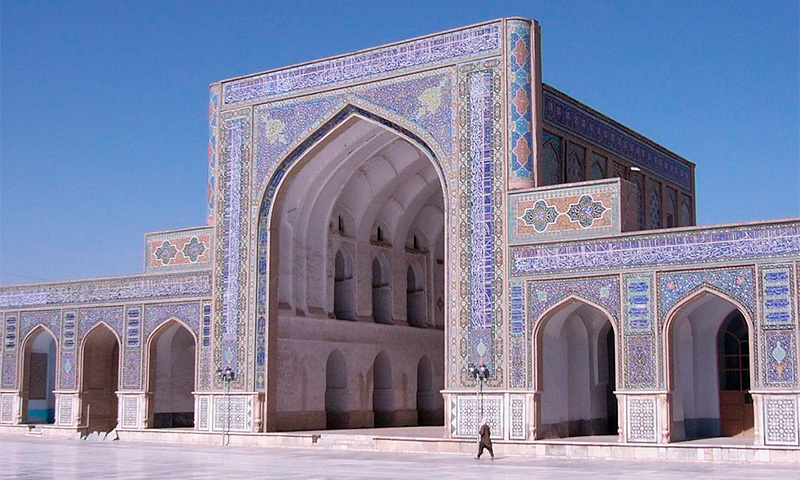 The Great Mosque in Herat underwent an extensive restoration in the middle of the last century – the walls, decor and tiles were restored. The poet, Sufi and statesman Alisher Navoi was originally involved in the construction of the mosque.

The walls of the building are decorated with amazing paintings and the inner yard can accommodate about 5 thousand worshippers. On the territory of the mosque since the 14th century there is a large cauldron, where for centuries they make sherbet for festive meals. 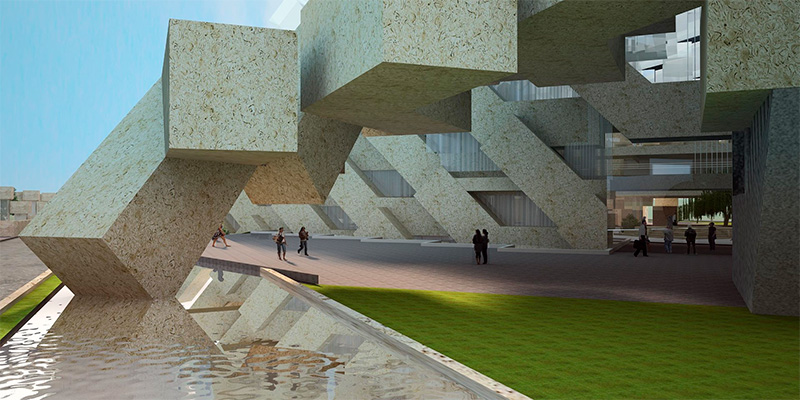 The museum was originally housed in the Bagh Bala Palace. Its collection contained manuscripts, weapons and objects of fine art from the property of the ruling dynasty. After some time, the exposition was moved to the royal palace of Amanullah, and then to the city assembly building. Since then, its collections have expanded considerably.

Now one can see items of Buddhist, Hindu, European and Islamic heritage. The exhibits include a huge number of ivory pieces. One of the most famous items in the museum is the Rabakat inscription of the ruler of Kanishka. 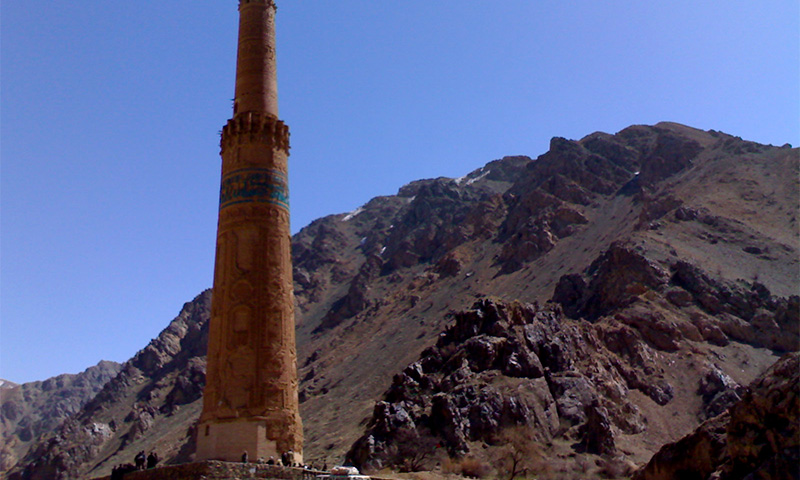 The monument, a UNESCO World Heritage Site at risk of collapse, is located ten kilometers from the village of Jam in Ghor province. The minaret is almost a thousand years old – it remembers the wounds inflicted by Genghis Khan.

Active work on its strengthening began in the middle of the last century, when Italian architect Andrea Bruno studied the landmark and gave recommendations to local residents on its preservation. Under his guidance, the bank of the river Herirud, on which the minaret stands, and the foundation of the building were fortified.

The main value are the outer walls, decorated with tiles and ancient inscriptions. Active tourism and research on the minaret is hampered by the inaccessibility of the monument and the frequent flooding of the area. 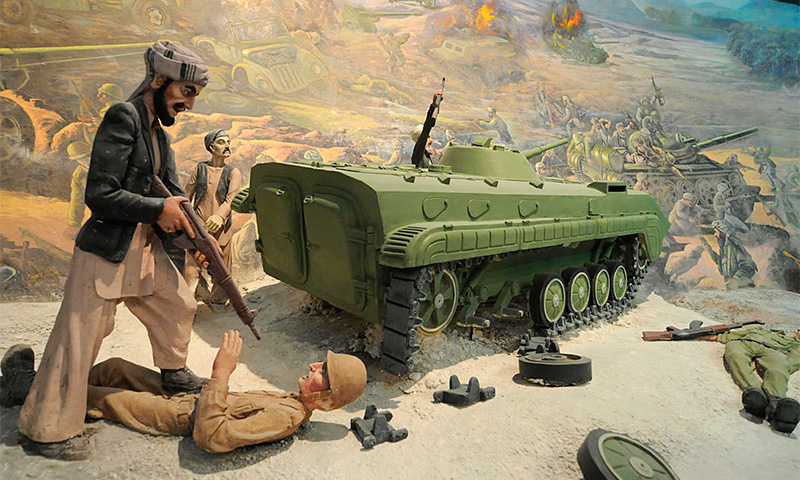 The Jihad Museum opened in 2010. It was originally conceived as a place to explore the history of the wars and conflicts that took place on the territory of Afghanistan. The museum consists of three rotundas – blue, white and green. The walls of the building are decorated with a memorial with the names of war victims, and poems dedicated to martyrs are written along the perimeter of the rotunda.

The museum’s main exhibit features Soviet weapons, including tanks, fighter jets, helicopters and light rocket launchers. A large number of small arms, grenades and plastic landmines are also on display here. Meanwhile, the institution, dedicated to such a harsh topic of war, is surrounded by a blooming garden decorated with fountains. 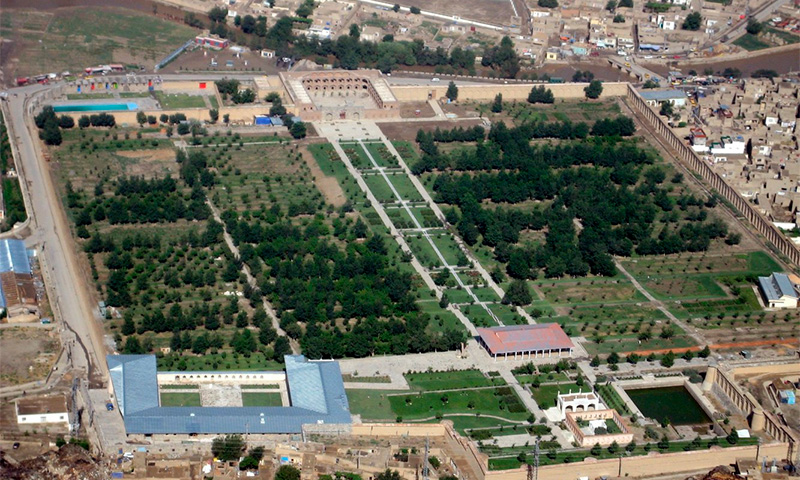 This is the name of the park with the tomb of Emperor Babur, considered the founder of the Mongol Empire. The arrangement was completed in 1529. Here is created 15 different-level terraces in the style of classical Mongolian architecture, which constitute the main composition of the garden, and the tomb of the emperor is surrounded by a wall of white marble and is located on one of them.

In the twentieth century, all the structures were badly damaged, and the structures had to be restored exactly to their original appearance. The garden now grows many varieties of plants, which previously did not take root in such an area. The park is regarded by the people of Kabul as one of the best places to relax. 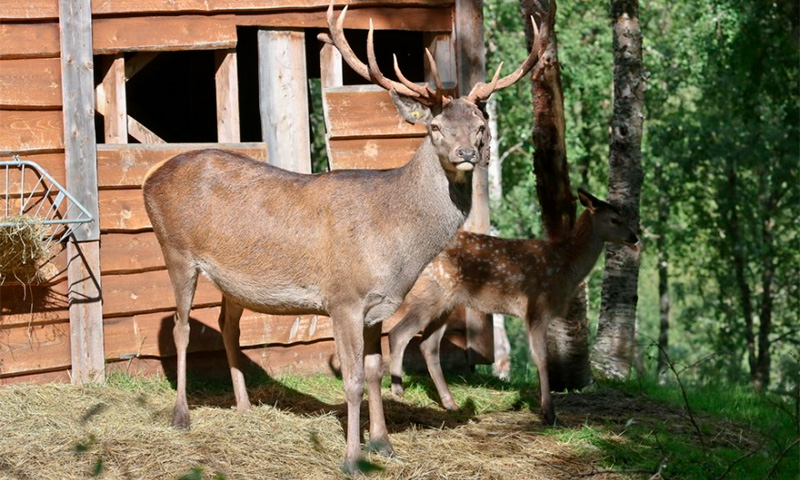 Kabul Zoo is the only place to keep exotic animals in the whole country. It opened in 1967 and became popular because of the diversity of Afghan fauna. The zoo was severely damaged in the fighting, but it was rebuilt in 2010 and now houses about 290 animals, including 45 species of mammals, birds and 36 species of fish.

However, there are some unpleasant stories associated with the Kabul Zoo – the Chinese government donated most of the animals there, but in 2004 a bear and a deer died on the grounds. After an investigation, improper nutrition and disease were cited as the cause. 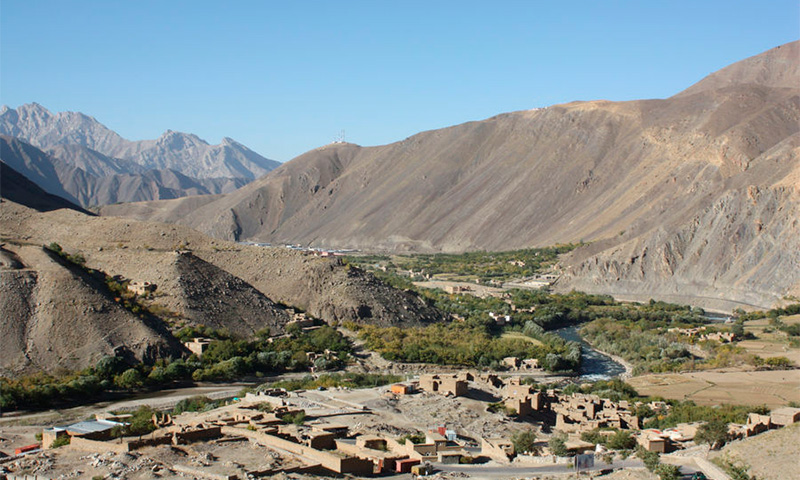 The Panjsher Gorge is located in northeastern Afghanistan. Its name literally translates as “Five Lions”. The mountain village of the same name nearby is famous for the beauty of the surrounding mountains and unique buildings made of fired clay, combined in complexes – very similar to bee honeycombs.

Nearby are a mountain lake, garden Bahi-Umumi, one of the most picturesque in the country gorge Hawak, five valleys and ruins of Kashkan Saffarid city, as well as the country’s first suspension bridge over Gulbahar and other ancient sites. 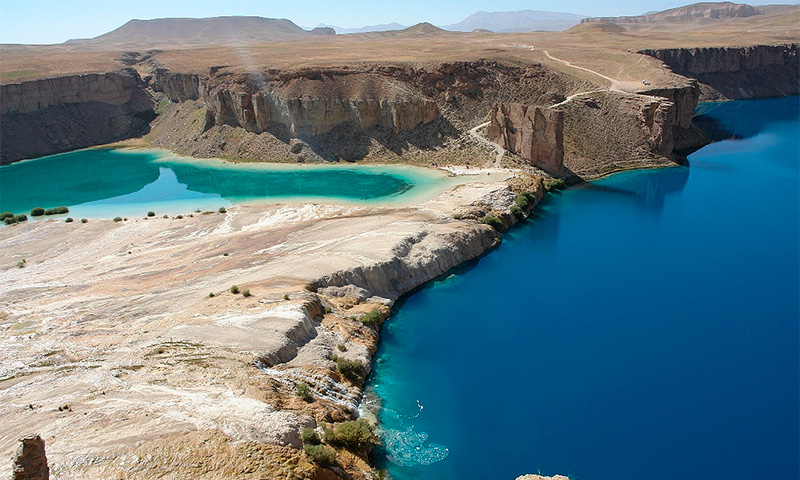 A complex of lakes with ultramarine-colored water formed in the heart of Afghanistan. Framed by pink limestone cliffs, Bande Amir is listed as one of the world’s most beautiful bodies of colored water. The unique hues come from the carbon dioxide in the meltwater seeping through the limestone rocks.

Among the six lakes, the smallest area is occupied by Bande-Panir, about 100 meters wide, and the largest body of water is Pande-Zulfigar, 6.5 km long. The most popular lake among tourists is Bande-Haybat. 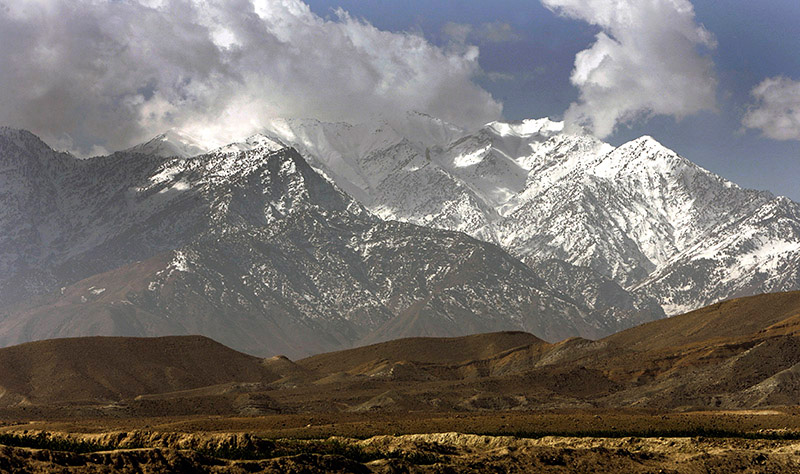 Tora Bora cave complex is located on the Safedhoch Mountain Range in the eastern part of Afghanistan. It is best known as a camp of the Islamist movement and the largest terrorist organization during the Taliban regime. It was here that the stronghold of the huge Afghan opposition formation, which took part in clashes with the troops of the USSR and other countries, was located.

There are karst caves, created by the washing out of limestone rock on the territory of the complex. They form a cluster of tunnels descending to a depth of over 400 meters. There are also dispersed galleries, warehouses, shelters, bunkers and living quarters. 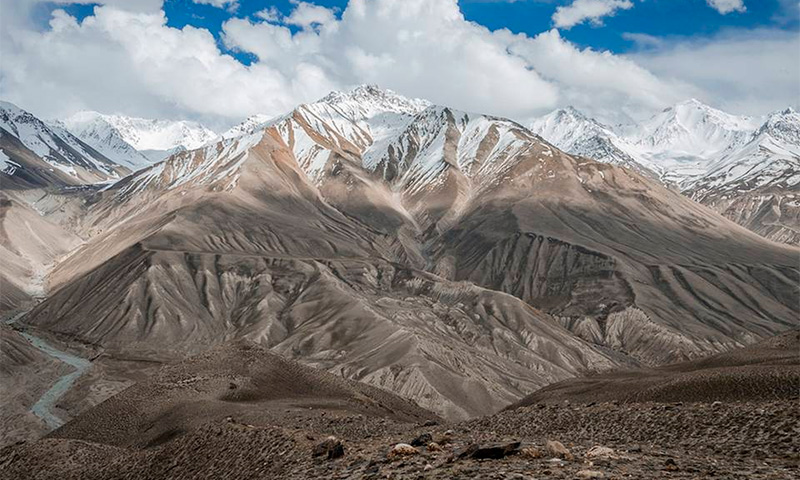 In geography classes, this mountain system is called the “roof of the world,” and that is how its name is translated. The chain of cliffs stretches across the territory of four states: China, Afghanistan, Tajikistan and Pakistan, cutting almost all of Central Asia. In Afghanistan, Pamir just recently began to attract tourists, so the infrastructure here is still in its infancy.

People come here for the pristine beauty of the mountains, to watch the setting sun behind the mud huts. There are no expensive hotels and complexes, and tourists live “savage” in tents at the foot of the cliffs or on the banks of rivers. In some places, even the last of the ovringi, paths on the steep cliffs, which local people used to walk by throwing brushwood on the trail, have survived. In the past, ravines were the only way to get around, but now you can travel by car along wide roads. 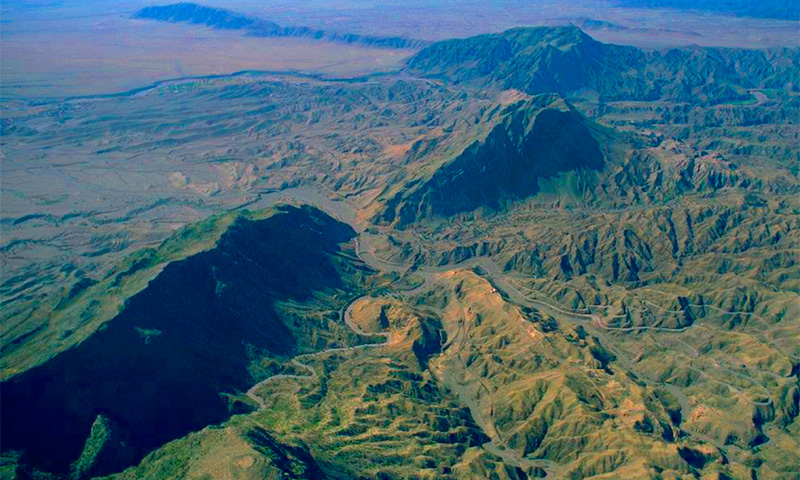 Located between Afghanistan and Pakistan and has been known since the time of Alexander the Great. The narrow passage from 15 to 130 m wide starts from the south side of the river Kabul and cuts through the Spingar range stretching more than 50 kilometers.

The road ends in the Afghan city of Torkham. After the great Alexander, the passage was used by the conquerors of South Asia, the great Mongols, and the British military. 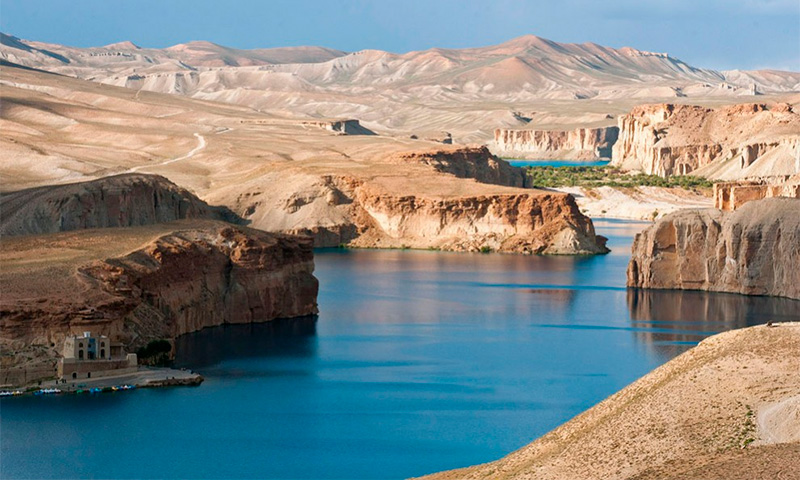 Sprawling on the outskirts of Kabul, Lake Kargha welcomes up to 2 million people annually to its shores. While adults enjoy the views of the mountains or the golf club, children can enjoy themselves in the nearby amusement park. At the lake, you can rent a horse and race against other campers. Boat and catamaran rentals are also offered at Kargha. 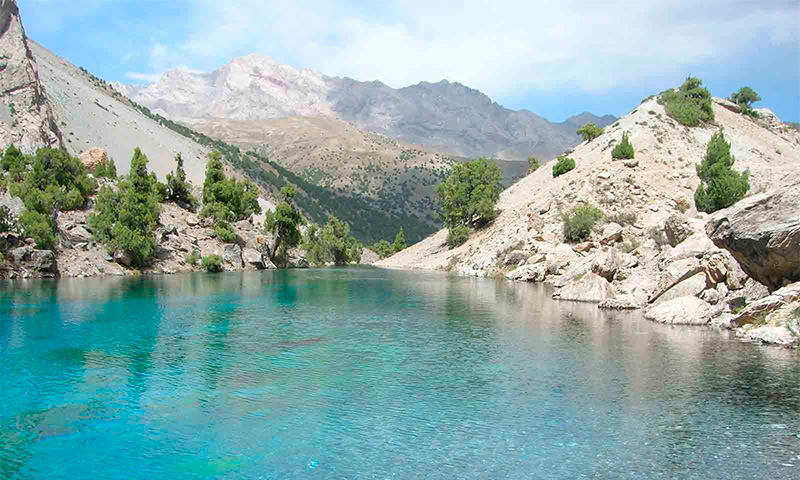 John Wood, a British Marine, called this lake “Lake Victoria of the Pamirs”, and the Soviet military returned it to its original name – Zorkul, which means “big lake. It is really huge and is located on the territory of two states – Tajikistan and Afghanistan.

READ
Getting around Tirana, Albania

On the Tajik side, the reservoir is part of a nature reserve protected by the state.