The 5 most interesting volcanoes in Italy

Italy has more volcanoes than any other European country. Everyone knows two of them – Sicilian Etna and the legendary Vesuvius. In fact, the country has more than 20 volcanoes, and only half of them are considered extinct. The rest are still active or asleep for a while.

The area of volcanic activity is located in the Tyrrhenian Sea and the Straits of Tunis. We tell you about the most interesting volcanoes to visit.

Etna is the highest active volcano in Europe, the symbol and heart of Sicily. The height of the peak is about 3300 meters, but it varies because of constant eruptions. 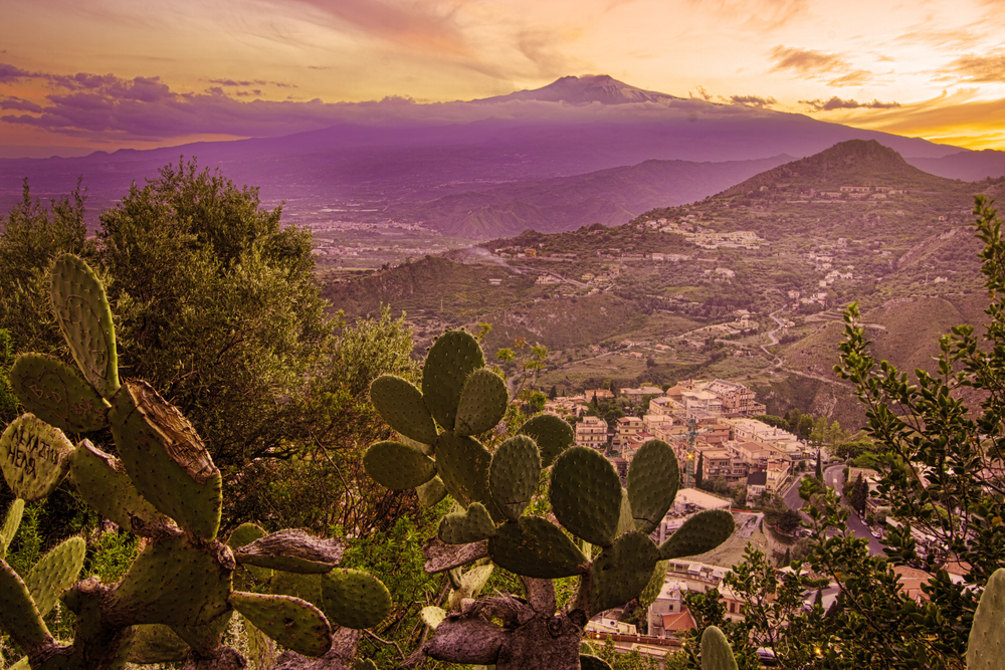 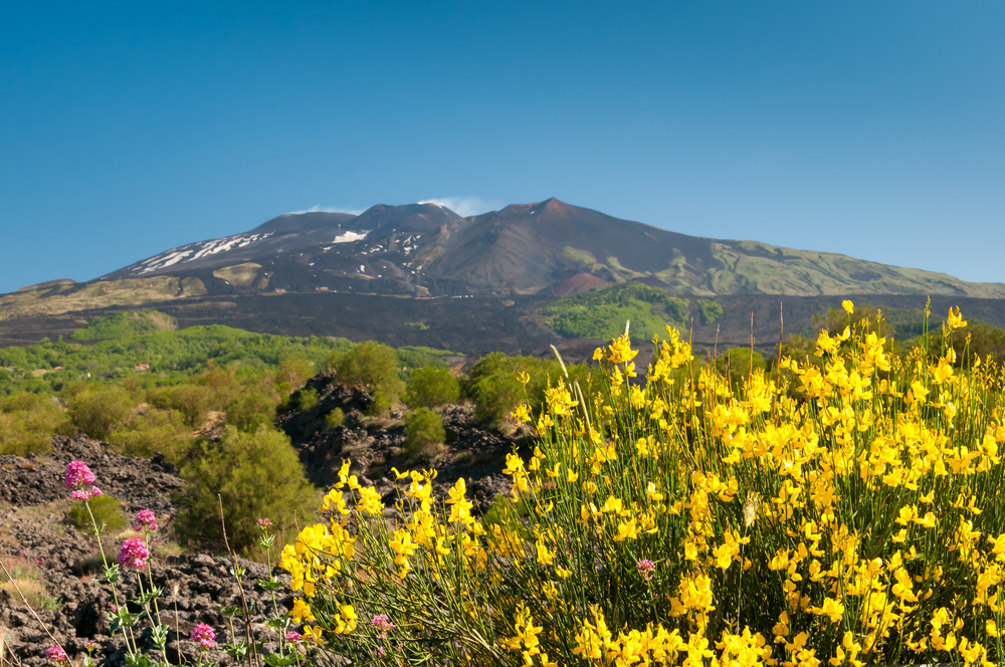 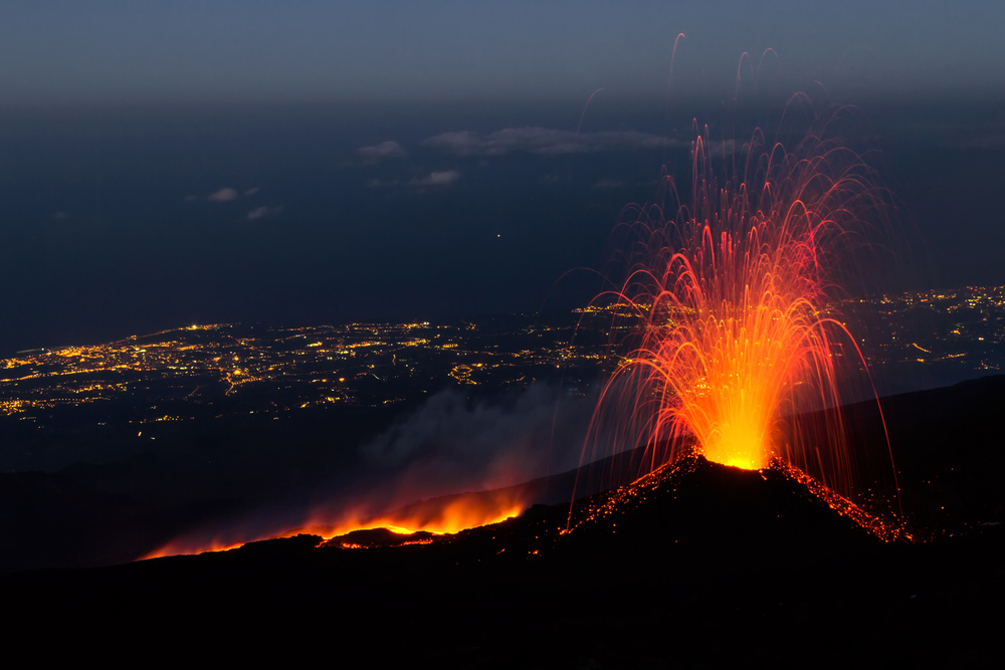 The most active craters are located in the center, from the north and southeast, with some reaching up to 200 meters in diameter. There are many small towns around the foot, which have been under constant threat in the past. Several times the lava even reached Catania, which is located three dozen kilometers from the volcano.

Now during the eruption of the hot streams go down to the sea on the eastern side of the mountain, where almost no settlements. But nature still shows its force: the last major eruptions in 2001-2002 years destroyed the cable car, ski slopes and the station at the top of Etna. In addition, the ash emissions from the capricious volcano strongly interfere with the airports of Catania and Reggio di Calabria and generally affect the environmental situation of the region.

The landscape of these places is astonishing. All the surroundings are covered with lava: black – fresher and grayish brown – from ancient eruptions. In the lifeless landscape, islands of southern greenery look like bright spots. But the higher you climb, the less vegetation remains. Along the way, you can see lava-filled ruined cabins – reminders that the danger is real. Farther up, the scenery becomes quite “lunar” – no buildings, just black sand and rocks.

Snow lies on top of the mountain almost all year, except during the summer season. In the winter, you can go skiing here. And the best time for excursions is from May to October.

To climb the volcano, the best way to go from the south side, through the town of Nikolozi, then in the direction of Rifugio Sapienza (height 1923 m), where there is a funicular station, parking, souvenir stores and cafes. This is also where the small craters with traces of yellow sulfur begin, on which you can climb.

The funicular takes you to a height of 2500 meters. If you want adventure, you can go on foot (the way will take about 2 hours). For an additional fee all comers are taken to the top station on off-road vehicles. When climbing, even in warm weather, be sure to bring warm clothing, appropriate footwear, water, sunglasses and cream.

Small Stromboli, which belongs to the Liparian Islands, is a unique place. 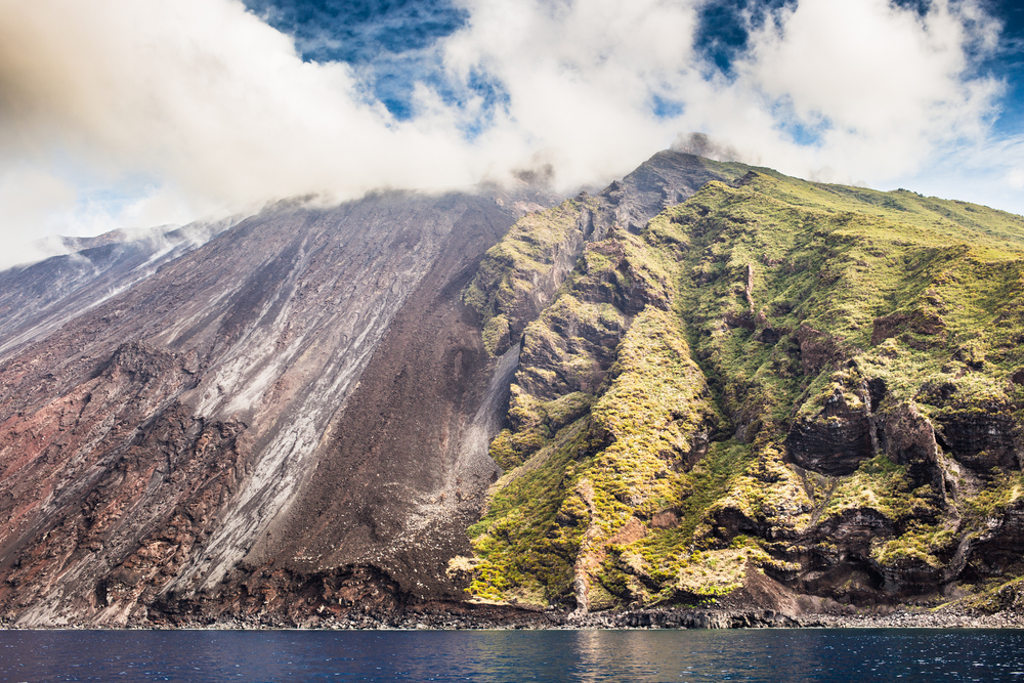 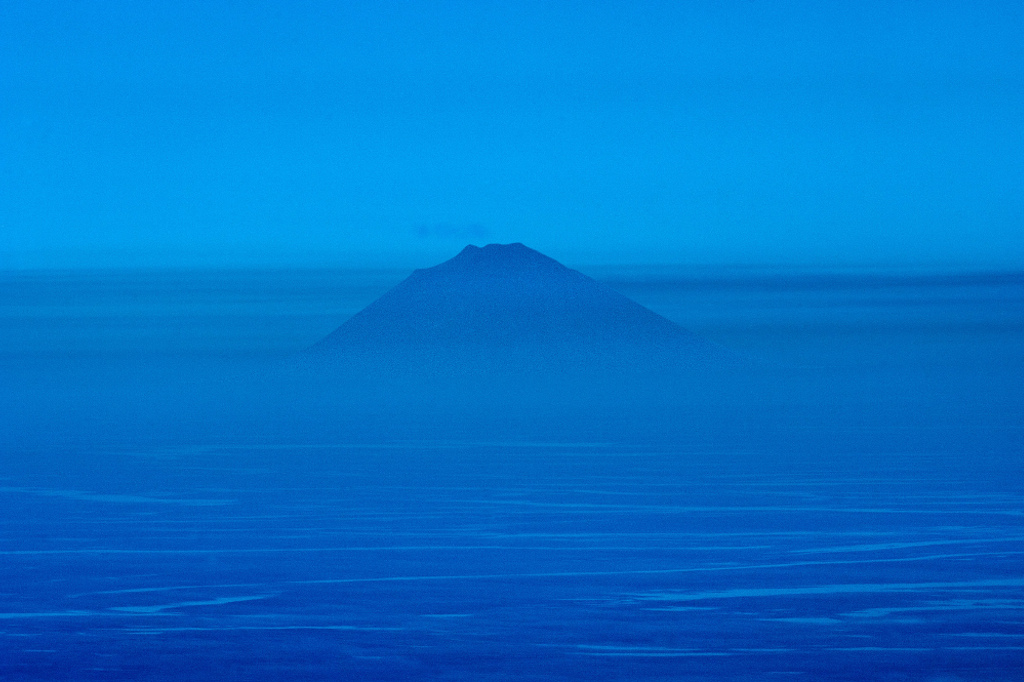 The island appeared due to the activity of the volcano, which is still constantly erupting. Every 10-20 minutes it throws hot lava a hundred meters upwards. These emissions of lava can be seen from afar, so Stromboli has long served sailors as a lighthouse. When the volcano fell asleep for a while, they had to build a real lighthouse on a rock near the island.

Stromboli is sometimes called Aeolia, because in Homer’s Odyssey it is where the wind god Aeolus lived. Through this volcano the heroes of the novel “Journey to the Center of the Earth” by Jules Verne return to the surface. And the director Roberto Rossellini shot here the film “Stromboli, God’s Land” with Ingrid Bergman in the leading role.

Today, Stromboli is home to no more than a thousand people. The island has three villages, many hotels and villas, beaches with black volcanic sand. A regular ferry service connects Stromboli with the neighboring islands, Messina, Milazzo, Naples and Reggio di Calabria.

Unlike other volcanoes, Stromboli can be climbed directly during the eruption. There are hiking trails of varying difficulty on the slope.

It is most interesting to see it in the evening, so most excursions start in the afternoon to get to the top when darkness falls. In this case, you will have to stay on the island overnight. Climbing is possible only with a professional guide. You will need special equipment that can be rented on site.

From Milazzo and other cities organize one-day tours by boat around the Lipari islands. In the evening, travelers arrive at Stromboli and can see the eruption from the sea. Tours are organized by many local firms that offer discounts when booking online.

Vulcano is another island in the Liparian archipelago that gave its name to all such geologically active mountains. In Roman mythology, the same name was given to the god of fire. 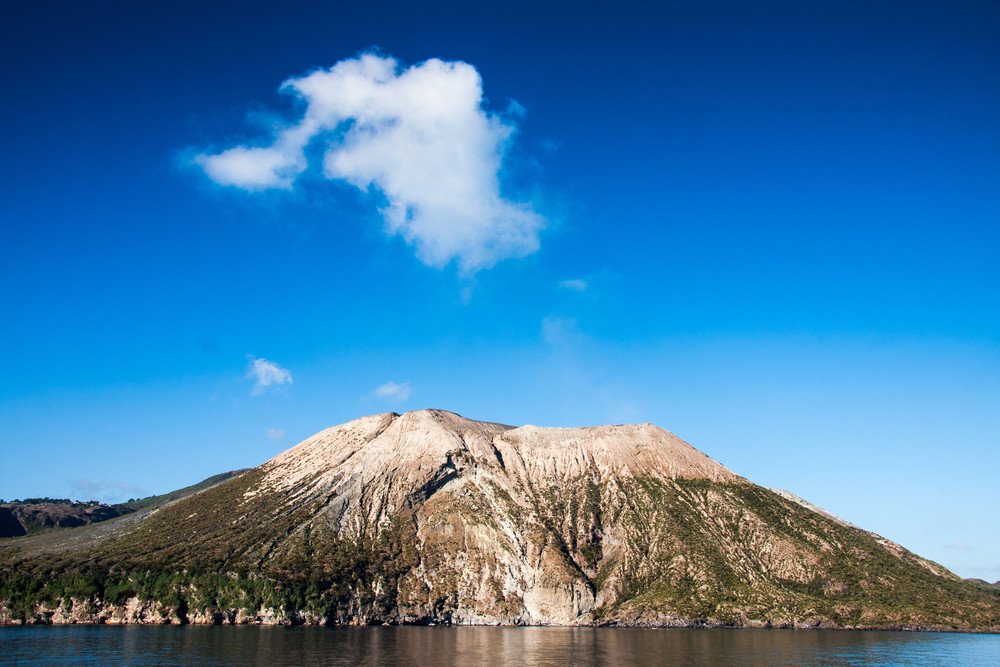 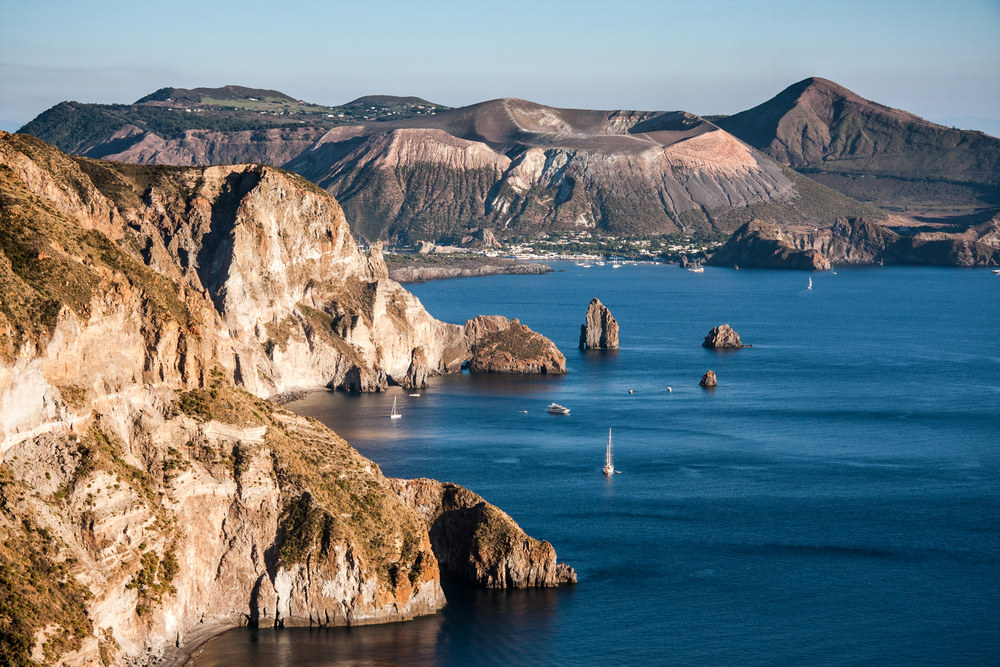 The volcano is now asleep, with only one of its craters releasing gas and hot steam. Vulcano is relatively low, and the ascent does not take much time. If you want, you can take a guide who will tell you more about the volcanic activity. From the top there is a beautiful view of the neighboring island of Lipari.

Vulcano has beaches with soft black sand, you can swim until mid-October. Spas at local hotels offer mud and sulfur treatments. Other activities include underwater excursions and tours of thermal grottoes.

The world famous Vesuvius is located 12 km from Naples and 10 km from ancient Pompeii. Although the last eruption occurred in 1944, it is still considered active and very dangerous. 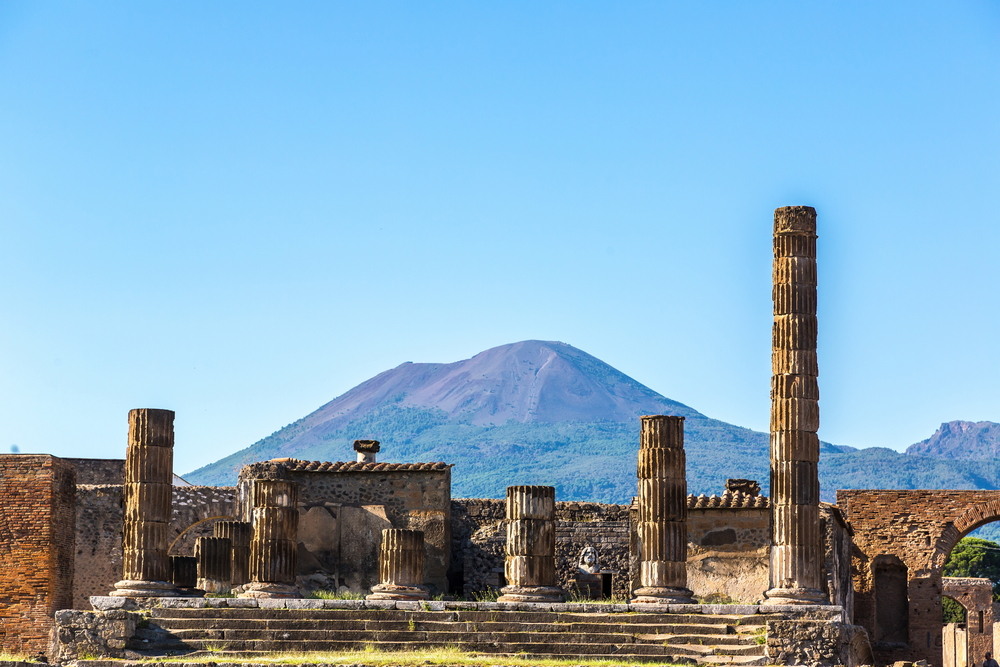 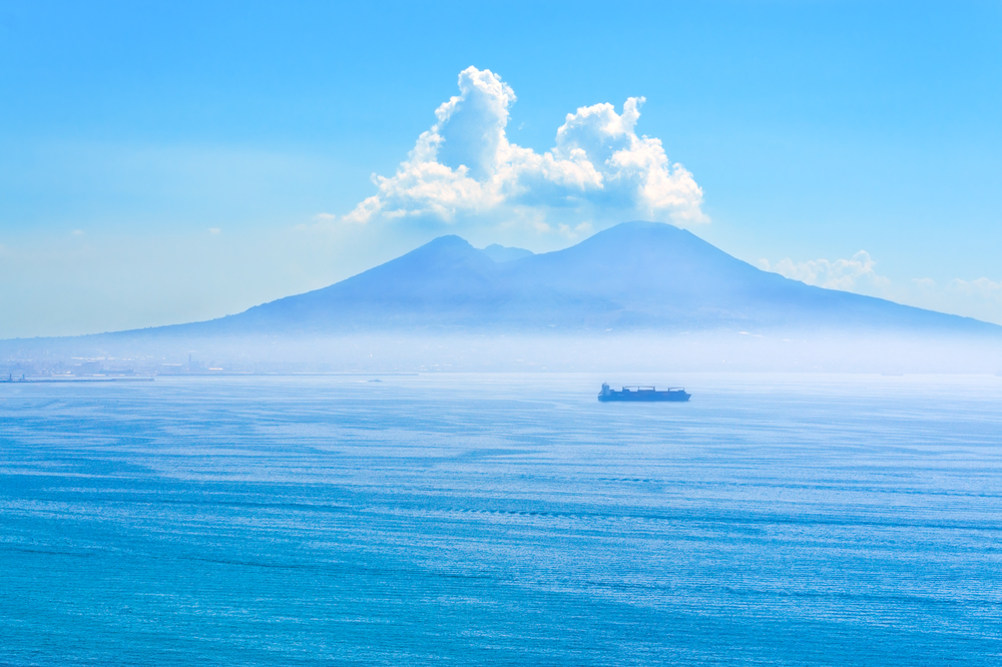 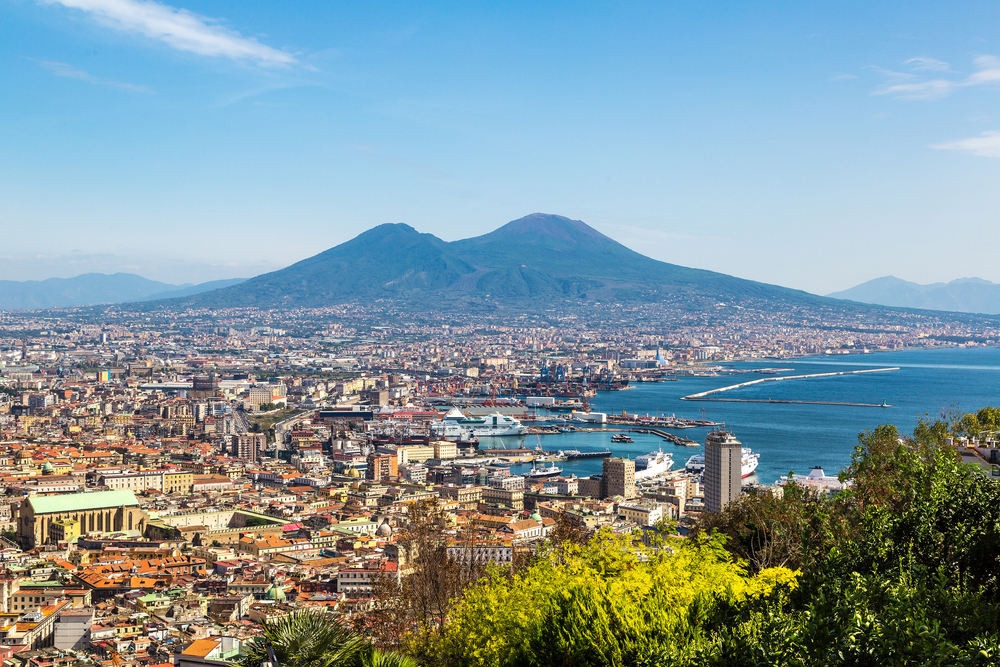 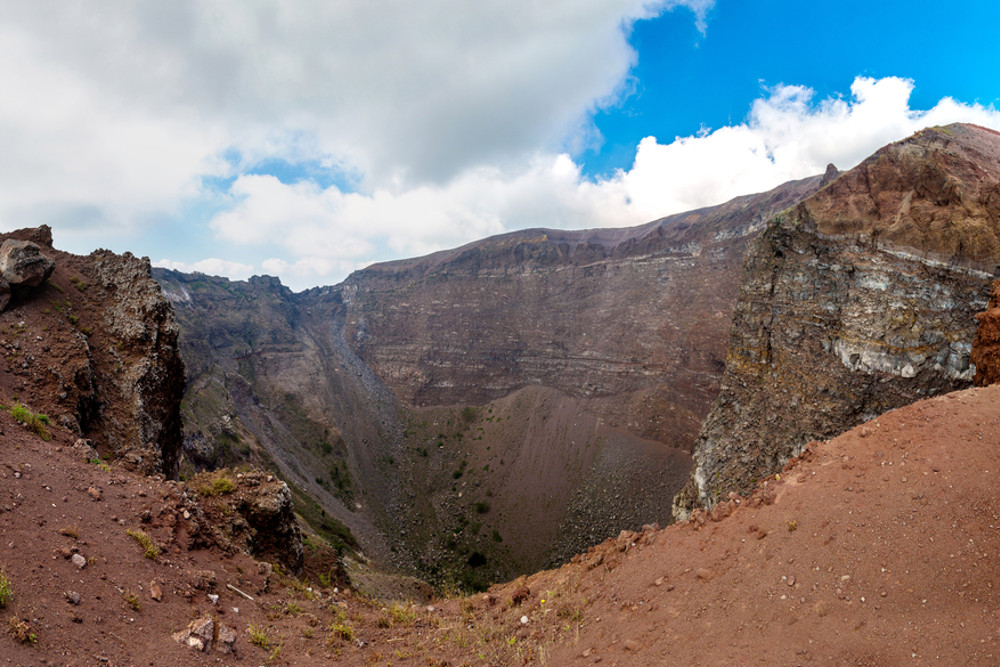 The volcano consists of two peaks: the older Mount Somma and Vesuvius itself, which appeared after the famous eruption in 79 AD that destroyed Pompeii, Herculaneum and Stabia.

Today about 700,000 people live at its foot. Vesuvius is under round-the-clock supervision of scientists from the Volcano Observatory, which is located on the slope.

You can climb the volcano throughout the year, but in the winter months the park is open only in the morning. You can get there by car or bus from Naples, Pompeii and Boscoreale. From there you have to walk and the ascent takes about 30 minutes. There is a fee to enter the park.

The Fields of Phlegreia are several craters on the shores of Pozzuoli, northwest of Naples. Thermal springs and steam and gas eruptions occur here. Lakes are formed in the place of the extinct craters. 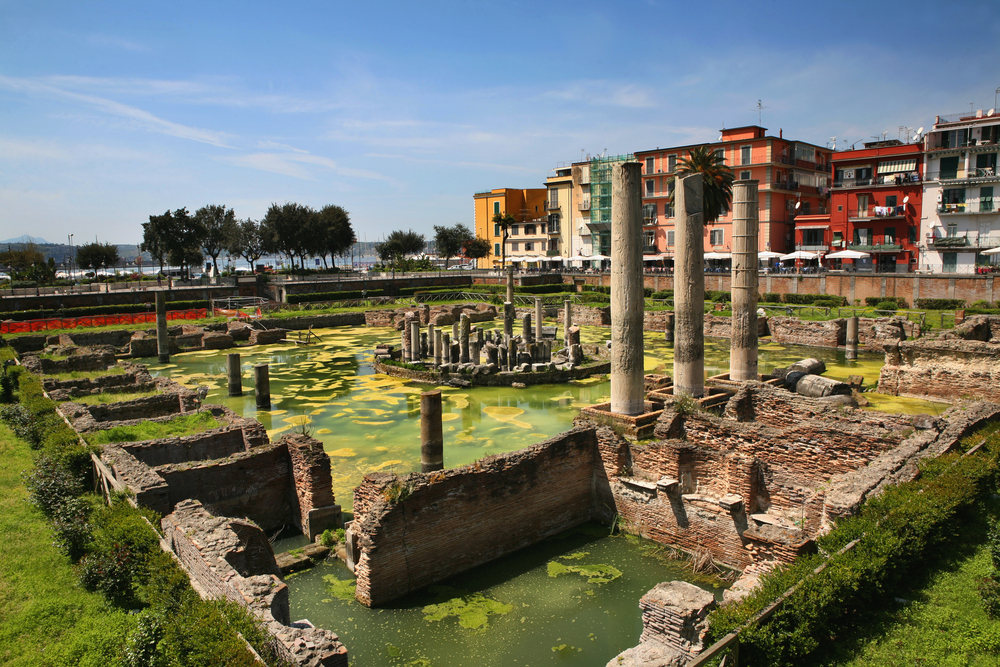 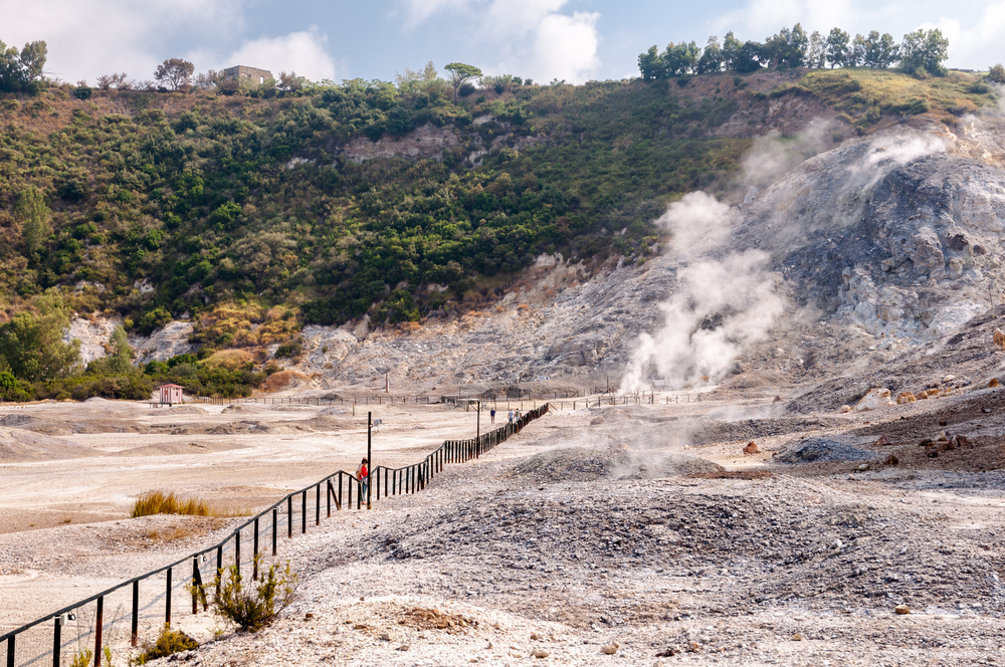 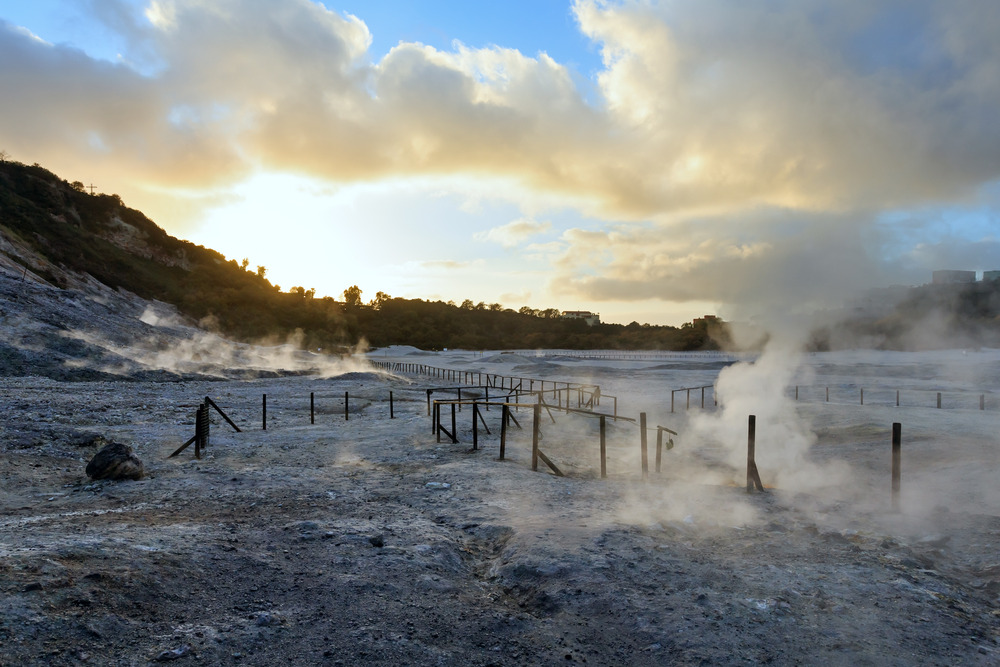 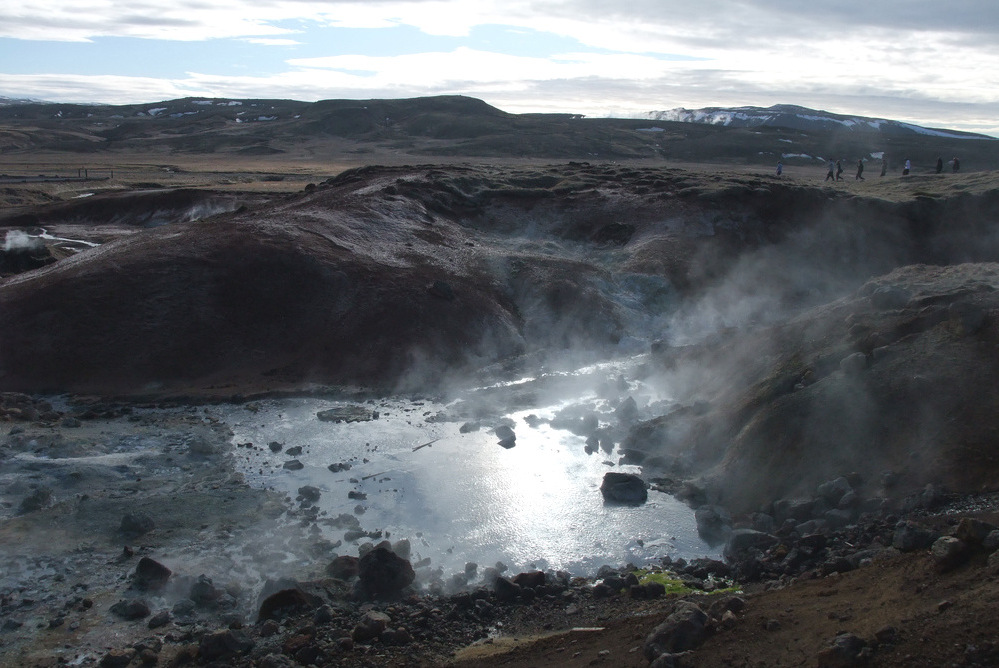 The town of Pozzuoli has many ancient Roman buildings, including amphitheaters and thermae. This city, founded by the Greeks and later conquered by the Romans, remained for a long time the main port of the empire.

In ancient times, the neighboring town of Baia was a favorite resting place of the Roman aristocracy. But due to volcanic activity, the earth’s strata have moved and most of the ancient buildings have been submerged. You can see this underwater archaeological park on transparent-bottomed boats or during a deep dive. 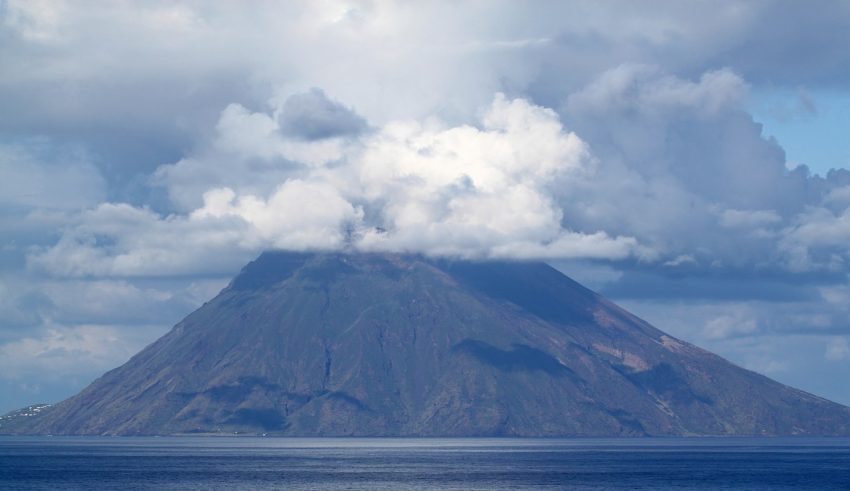 The expression “live like a volcano” Italians are not familiar with by hearsay. That Italy is the most volcanic country in Europe. It is often compared to Iceland by the number of active volcanoes in the state. 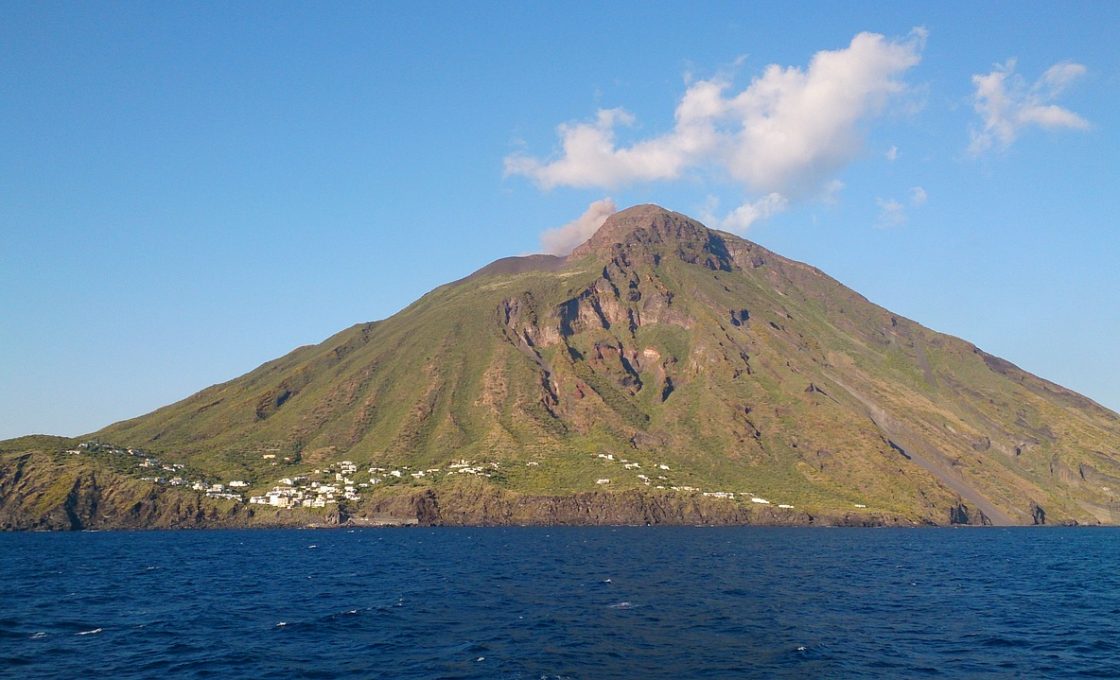 In Italy there are more than 20 volcanoes. Only half of them can be considered dormant, but Stromboli volcano, it seems, never sleeps. The fire-breathing mountain is 926 meters high. The last small eruption was in 2007. Even today the volcano shows excessive signs of activity, and is under the watchful eye of specialists.

Stromboli is located in the north of the Aeolian Islands. Once its seismic disturbances lasted more than 20 days.

The wake-up of the volcano is always associated with landslides or shifts of continental plates.

READ
Top 5 most beautiful bridges in the world

Kampi Flegrei and its activity

Volcano Campi is located near Naples. Although its last awakening happened in the 16th century, it is regarded as a volcano with increased activity.

The fire monster is 458 meters high. It has 24 craters, and the power of Vesuvius. If Campi wakes up, it could wipe out half of Europe.

Despite the fact that it is forbidden to live near volcanoes in Italy, Naples is constantly under the threat of potential destruction. 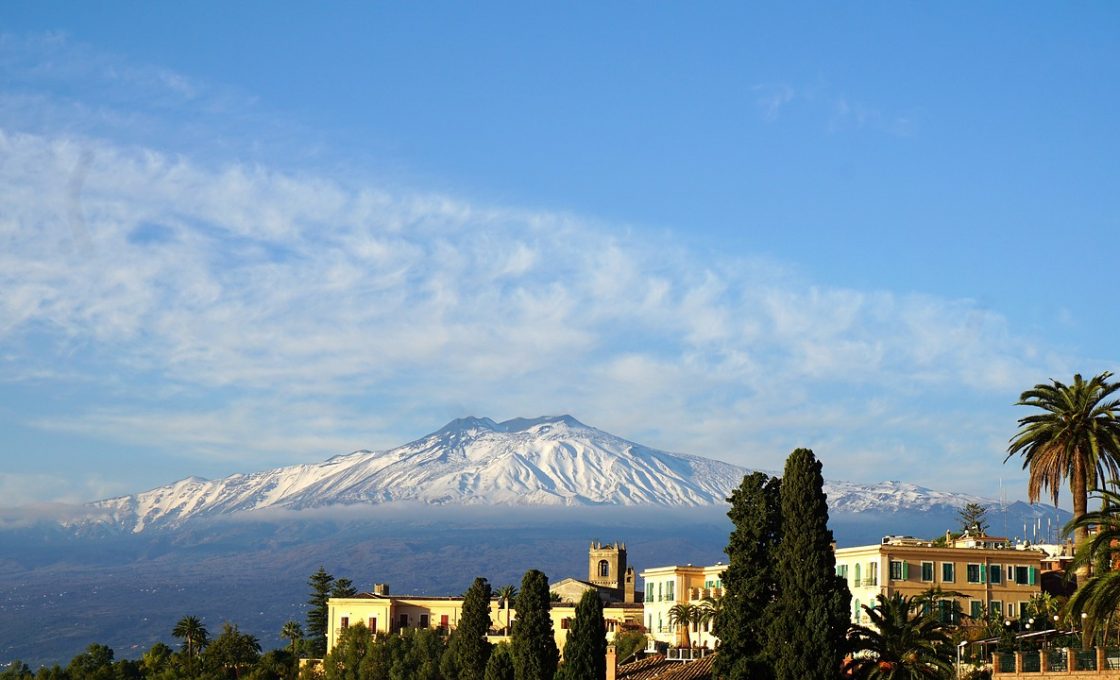 Etna is a volcano that researchers in Sicily consider highly unstable and explosive.

Its recent eruption in 2013 has frightened everyone on the island. The height of the huge source of lava and ash is 3,350 meters.

Etna is a part of a huge Italian volcanic complex, which hasn’t stopped its activity even today.

Etna periodically signals to all Sicilian people with clouds of smoke, ash and lava flashes, but so far the activity of the volcano is within normal limits.

The largest volcano on the island of Epomeo

The beautiful island of Ischia also suffers from the fact that it is home to several volcanoes at once. The largest, Epomeo, reaches 787 meters into the sky.

It is now in a semi-sleeping state, and delights visitors to Ischia with its exemplary behavior.

Vulcano and the God of Fire

In 1890 Vulcano for the last time “delighted” spectators with his fiery performance. Its height is 500 meters, and this giant looks just grandiose.

The Romans believed that in this volcano near Sicily, lives a real God of fire, which should be regularly asked, or else be in trouble.

Today, Vulcano is a dormant natural phenomenon, but its condition is not stable and can change in an instant. 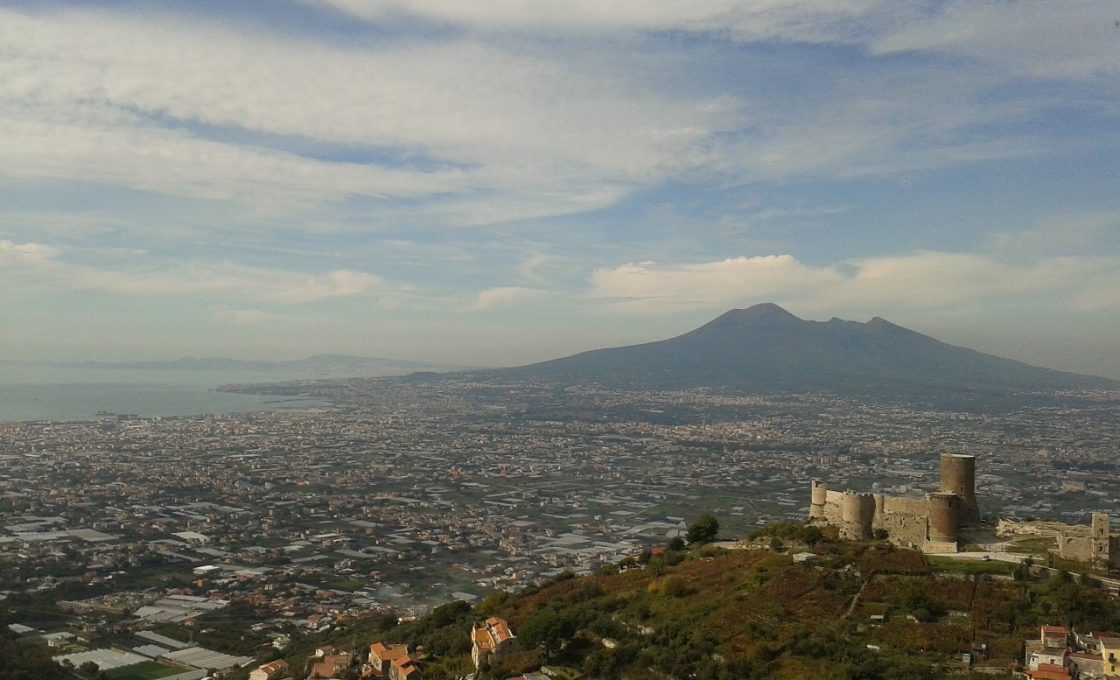 The region of Campania is extremely unlucky to have such an explosive neighbor in its territory. Vesuvius erupts every 20 years. It was he who, according to studies, destroyed Pompeii.

The height of the volcano is 1,281 meters. Around it there is a red zone, where people are strictly forbidden to live, but if Vesuvius wakes up for real, the people of Campania will not be able to save their homes from its omnipresent wrath.

Italy is a European country of volcanoes, whose beauty cannot be spoiled even by the constant threat of lava eruptions. Italians believe that in the future there should not be any strong eruptions. To prevent dangerous consequences at volcanoes, special services are regularly employed, as well as scientists who are able to assess their true state at the moment.