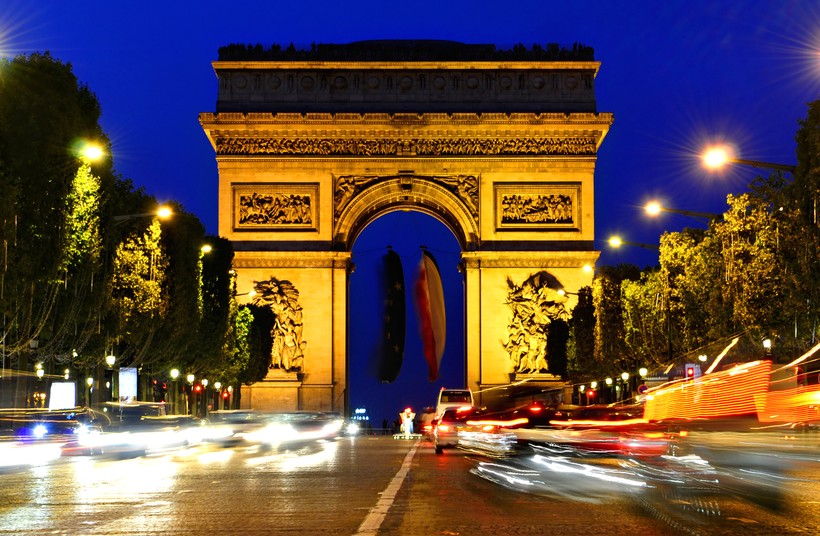 We started our acquaintance with Paris with Notre Dame Cathedral behind us, and then with the Louvre and the Champs-Élysées. Now we are at the Arc de Triomphe at the Place de l’Étoile. This square has another name – Place Charles de Gaulle (la pace Charles de Gaulle). It has it since 1970, when the national hero of France, the head of the French Resistance to the Nazis, the founder of the Fifth Republic, General de Gaulle died.

The area in diameter of a quarter of the kilometer received in due time the name of the Star: from it in all directions diverge twelve rays-streets. Let’s take a look together. First of all, of course, are the Champs-Elysées, beyond the Arc de Triomphe continuing northwest to the Avenue de la Grande Armée, as well as the Avenues de Jena, Friedland and Wagram, named after Napoleon’s victories. Other avenues bear the names of military leaders – Auch, Foch, Kleber, Marceau, Carnot. One recalls the great writer Victor Hugo and another is named after Patrice de Mac-Mahon, who was president of France from 1873 to 1879. Born of Irish aristocrats, he is of interest to us as the commander-in-chief who in 1855, during the Crimean War, took the Malakhov Hill in Sevastopol, and in 1871 suppressed the Paris Commune. 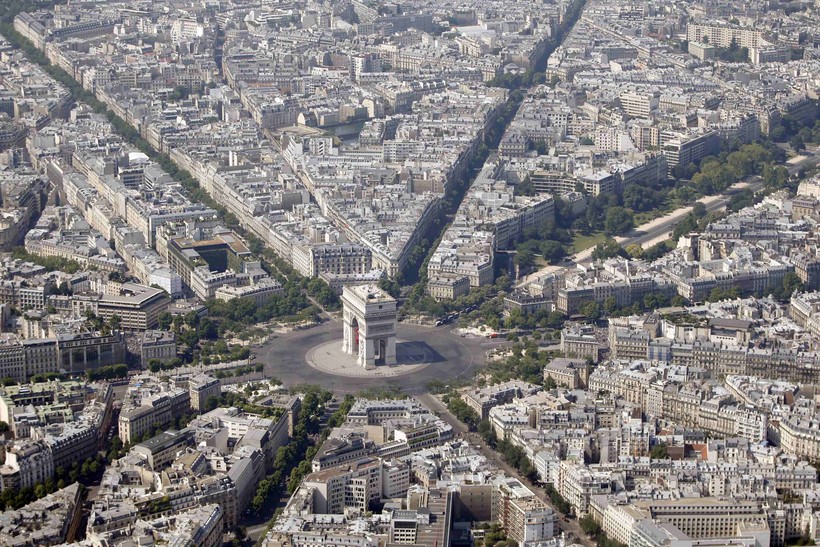 The biggest in the world – 50 meters high, 45 meters wide and the arch is 30 meters high – the Arc de Triomphe was the embodiment of ambitious plans of Napoleon Bonaparte. Self-proclaimed, as we would say today, the monarch, who grew from junior lieutenants to emperors in 19 years, made with his soldiers and officers a lot of campaigns, won dozens of battles. Naturally, he wanted to perpetuate the exploits of his Great Army.

We have already seen the Arc de Triomphe on the Place du Carrousel near the Louvre, built on his orders. But its scale (only 19 meters in height) seemed to Bonaparte humiliatingly modest for his military genius. Then he ordered another arch, far more magnificent, to be built on the same historic axis of Paris that now runs from the Louvre to the Défense district. At the time, it ended on the Chaillot Hill. In 1806, after the victory at Austerlitz, it was the hill that Napoleon chose as the place for a monument to his soldiers. Well, and himself too. He appointed Jean-François Chalgrin, 67 years old, a famous neo-classical architect, as the designer.

It did not take long for the construction to move ahead. It took two years just to lay the foundations of the giant structure. In 1811, before the construction was completed, Chalgrin died. Napoleon’s military fortunes began to change too often: what kind of monument to triumphs was it when, after fleeing from the ruined Moscow, the emperor himself said: “The great army no longer exists!” And when the Russian troops, having taken Paris on 30 March 1814, bivouacked on the Champs-Élysées, right next to the under-construction triumphal arch, they generally preferred to abandon the arch in honor of the victories of the French army.

Only King Louis-Philippe I, who reigned in 1830, returned to the faded glory of his predecessor on the French throne. It was only in 1836, thirty years after work on the Arc de Triomphe began, that it was finally completed.

It is impossible not to notice the Arc de Triomphe if you go to the northwest of the French capital: a large letter “P” will peek out from behind each building and loom at the end of each of the twelve avenues that converge near it. In short, don’t get lost. 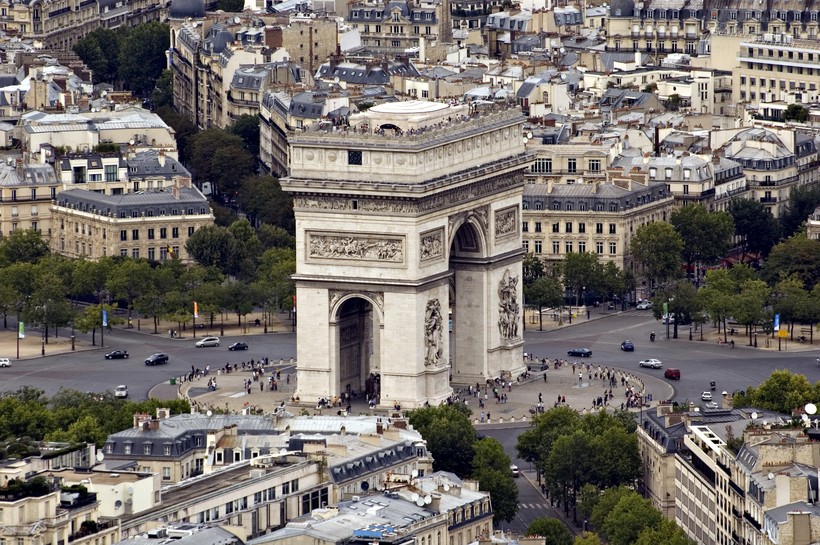 The subway is even easier to get to – the station “Charles de Gaulle – Étoile”. You can’t cross the square by foot to the arch and it’s not even worth trying, because there are no crosswalks with crosswalks. They would simply paralyze uninterrupted traffic through this most important transport hub of Paris. So you and I will have to go down to one of the underpasses.

Addresses and authors of the Triumphs

After entering under the arches of the Arc de Triomphe, the first thing we will do is go to the Eternal Flame on the tomb of the Unknown Soldier, who died in one of the battles of World War I. The grave, located right at the level of the sidewalk, appeared here in 1921 (pictured below). And when you look up, you will see two huge cloths reinforced under the arch – the national tricolor of France and the star flag of the European Union. 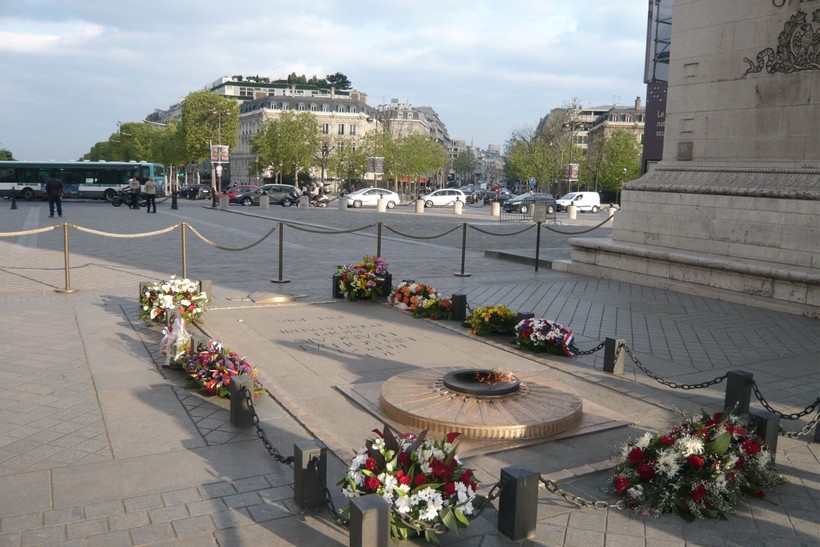 And now you can admire the six bas-reliefs and four high reliefs that recount the “stages of the great journey” of Napoleon’s army. We’ve known what a bas-relief is since childhood, but high reliefs are rarer, like sculptures coming out of a wall.

The most famous of the four high reliefs is Marseillaise by François Rude. What is the sculptor trying to tell us? 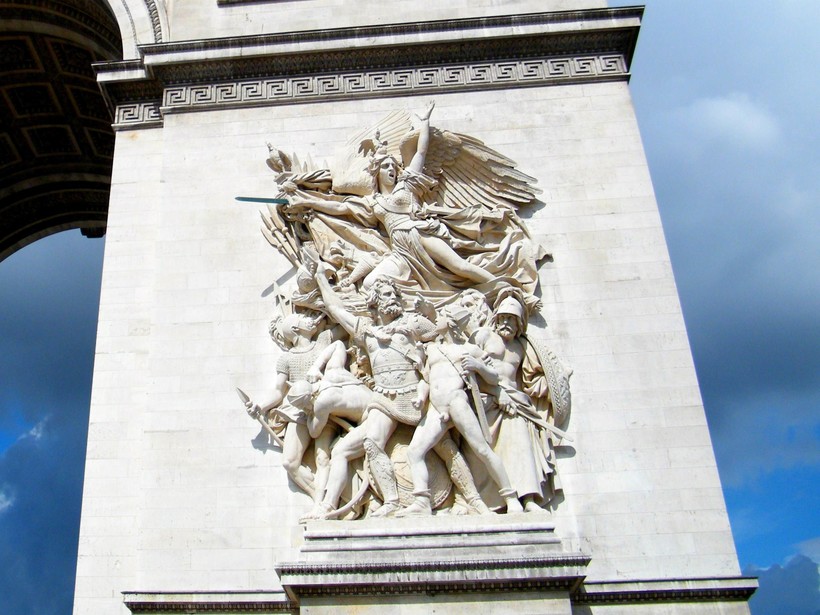 When the Prussian army invaded Lorraine in 1792 (a province that had been disputed between France and Germany for centuries), revolutionary-minded volunteers set out to fight. This included the Marseilles Volunteer Battalion. Overnight alone, Joseph Rouget de Lisle, a military engineer, wrote a march for it that soon became terribly popular and was called the “Marseillaise,” that is, the song from Marseilles.

Only a year and a half later, “La Marseillaise” by the decision of the Convent became the national anthem of France, and remains so until now. You would not believe: between the February and October revolutions of 1917, it was also the anthem of Russia!

Another high relief, The Triumph of 1810 by Jean-Pierre Cortot, depicts Napoleon himself crowned with victories over Austria and Prussia. 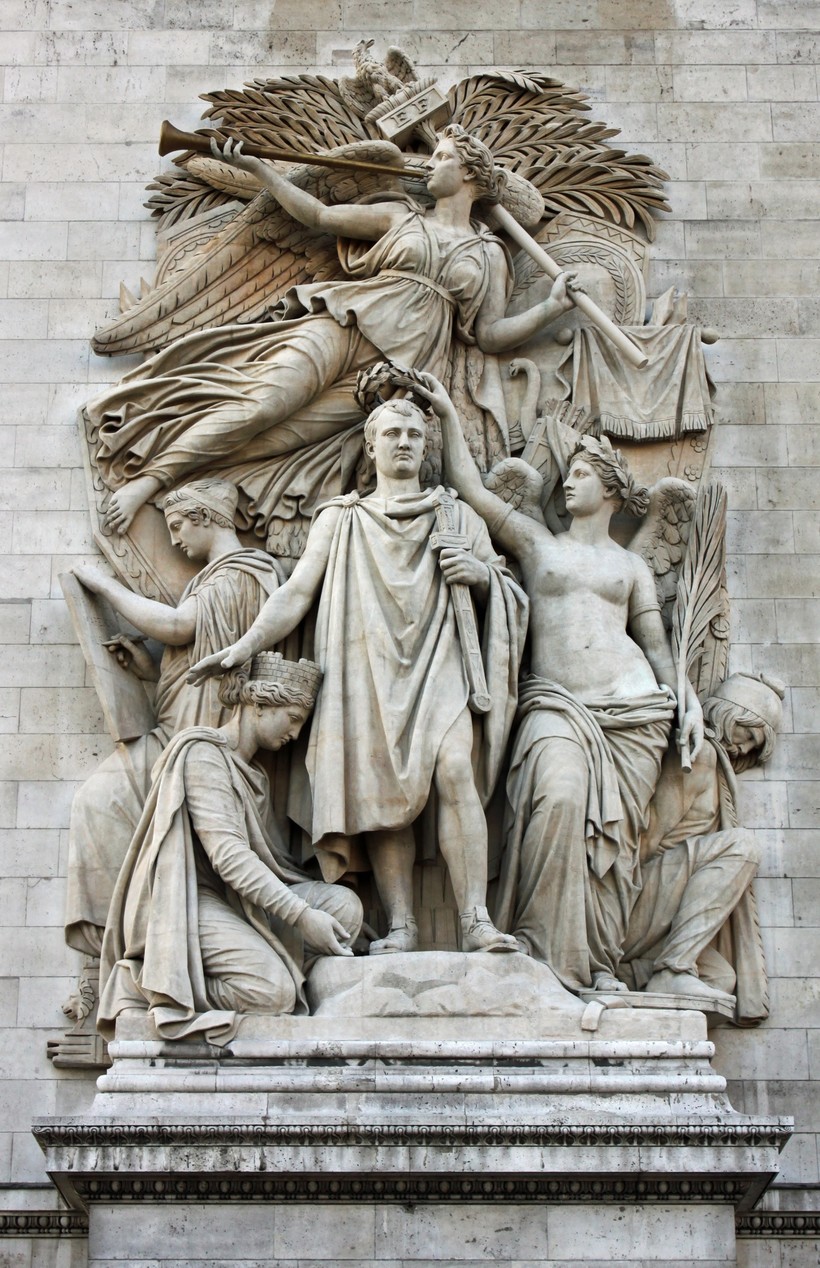 Another is called “Resistance 1814,” by sculptor Antoine Etex. Bonaparte was resisting, as you understand, the anti-French coalition led by Russia. 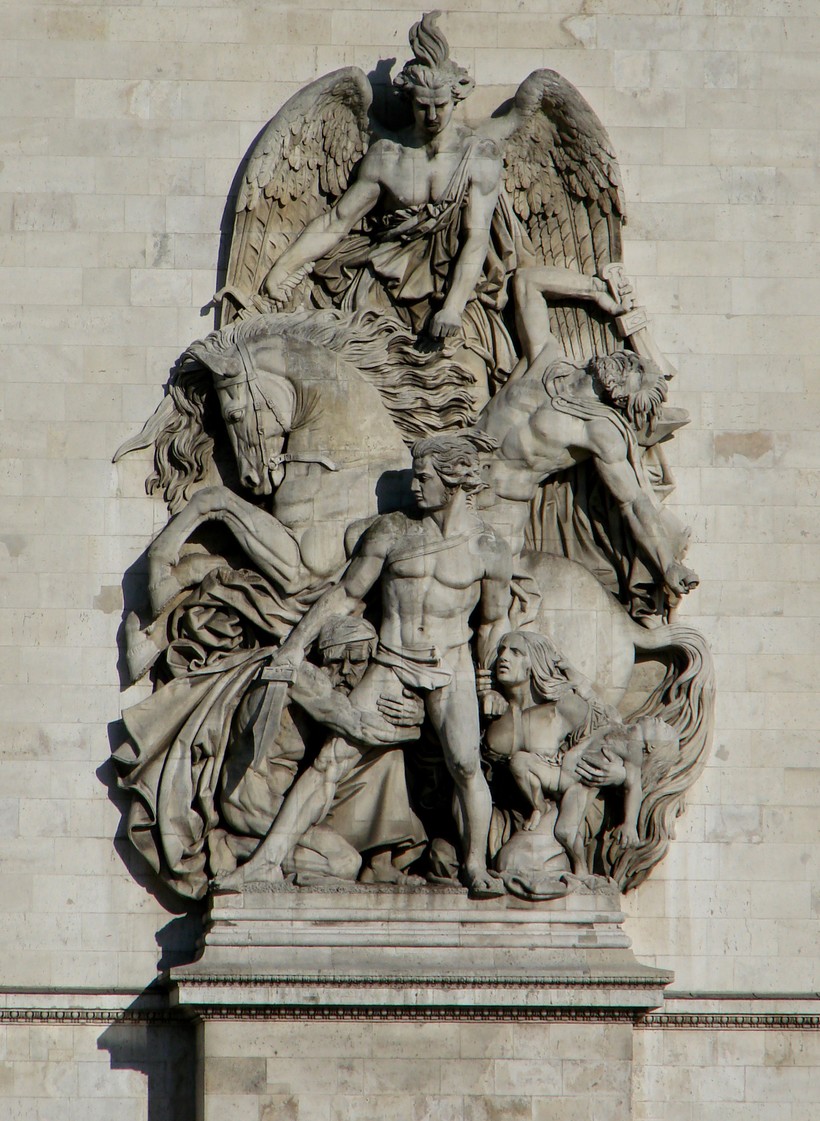 Finally, the composition Peace in 1815 (pictured below) by the same artist: the emperor has already abdicated and the war is over, so the high relief shows a warrior sheathing his sword, a peasant tending a plow, a mother caressing a child, a boy “pointing his finger at a book,” the place of the war horse was taken by a stout calf, a symbol if not of wealth, then of prosperity. And above all this peace is Athena, goddess of war and wisdom. 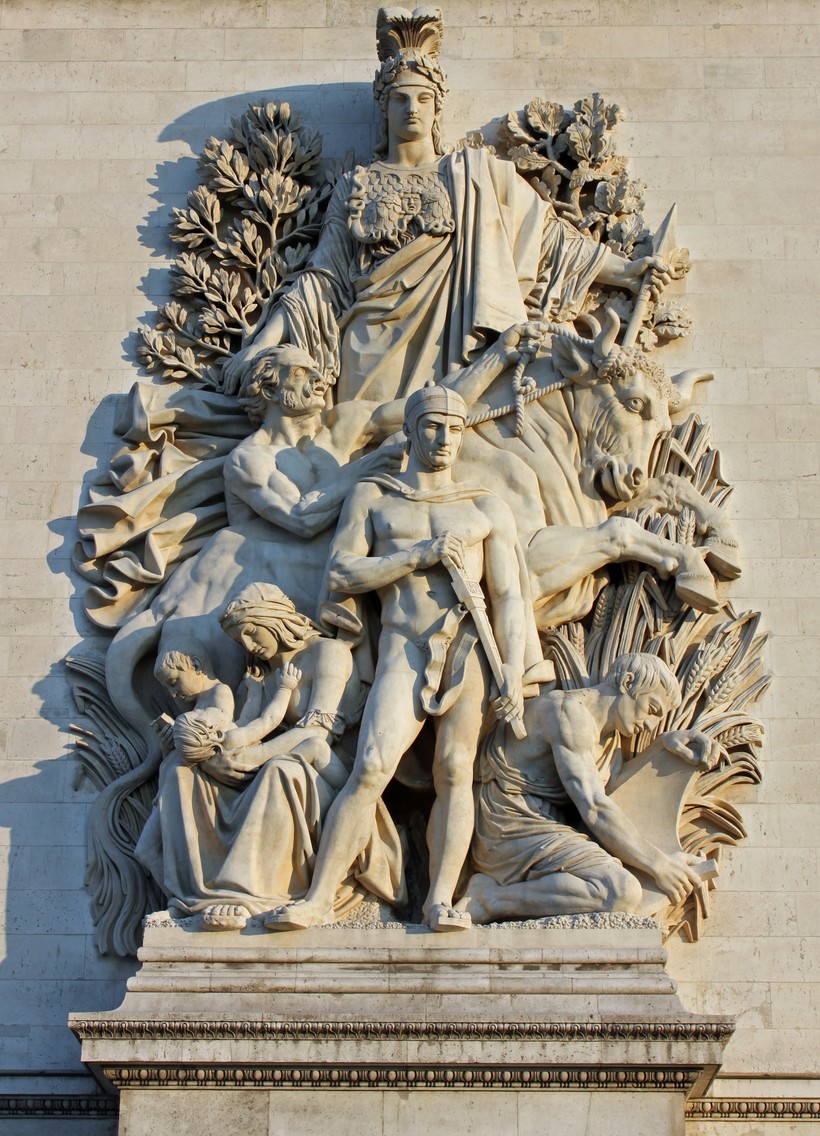 On the four pylons – supports of the arch, the names of 558 generals and marshals of the Great Army are carved, and next to them – the names of 128 places of victorious battles. On the eastern pylon of the arch you can also find our, Russian towns and villages. The ones where Napoleon believes he achieved his victories: Mogilev, Smolensk, Valutina mountain (the conquerors were not very good at spelling our place names, so the arch bears a certain “Valontina”), Polotsk, Krasnoe (to tell the truth, it says “Krasnoï” – we write it that way in French as we hear the Russians). But there is no Borodin on the eastern pylon. It turns out that even Bonaparte’s loyal subjects, not to mention ordinary subjects, did not recognize their emperor’s victory at Borodino. 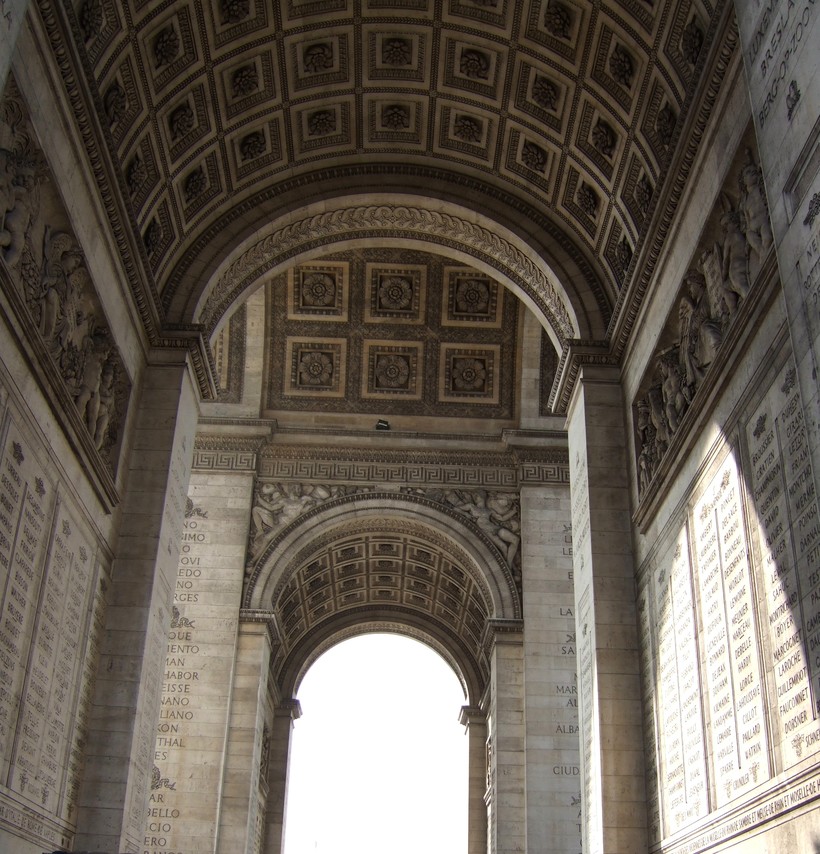 Perhaps everyone remembers the famous hundred days of Napoleon: February 25, 1815 deposed emperor escaped from honorable exile on the island of Elba off the coast of his native Corsica, to regain power, on March 1 landed with the remaining troops loyal to him on the Côte d’Azur, entered Paris. But he held power for only a hundred days. This time he was sent with less honor far away – to St. Helena in the South Atlantic. One hundred stone bollards connected by a chain around the Arc de Triomphe remind one of the unsuccessful attempt to restore the empire. One for each day of Napoleon’s failed and senseless return. 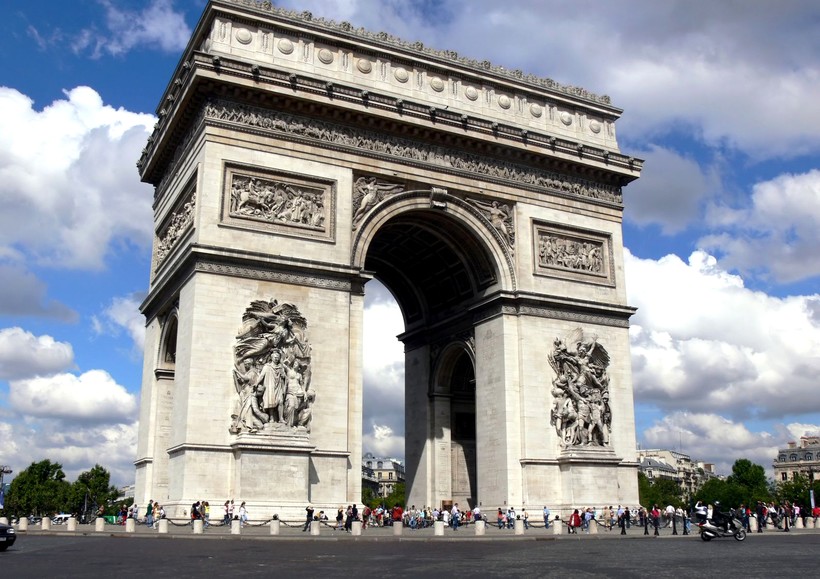 The new great triumph of French arms was not seen until a century after Napoleon’s defeat. On July 14, 1919, in honor of the Day of the Conquest of the Bastille, for the first time since the end of the world war of 1914-1918, a military parade marched under the Arc de Triomphe: infantry, cavalry, automobiles and even tanks. But the aviators were not invited to the parade. And then pilot Charles Godefroy decided to take revenge on all his comrades. He dashingly flew his plane under the archway on August 9, and journalists managed to film his feat. Take a look at the photo. Oh, what a scandal it was. 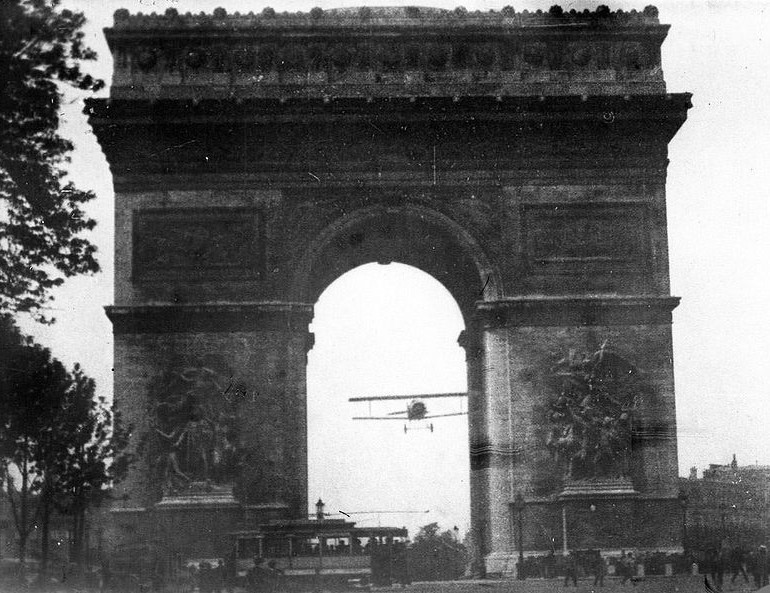 And, of course, it’s impossible to forget the parade on the Champs-Élysées in honor of the liberation of Paris from the Nazis, which was hosted by General de Gaulle, the leader of “Fighting France” on August 26, 1944. 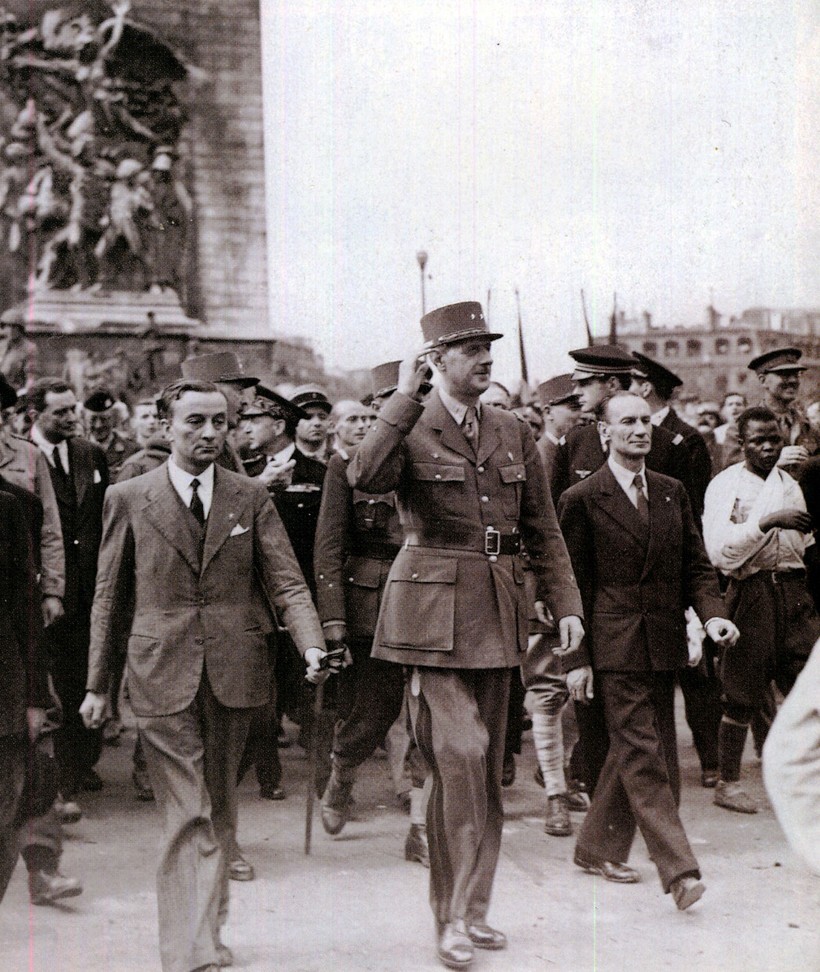 And now here, on the Champs-Elysées and on the Place du Star, military parades take place – on July 14, the Day of the Taking of the Bastille, on the anniversary of the Great French Revolution. And on May 8, Victory Day, and November 11, the day of the end of World War I, to the tomb of the Unknown Soldier state leaders lay wreaths. 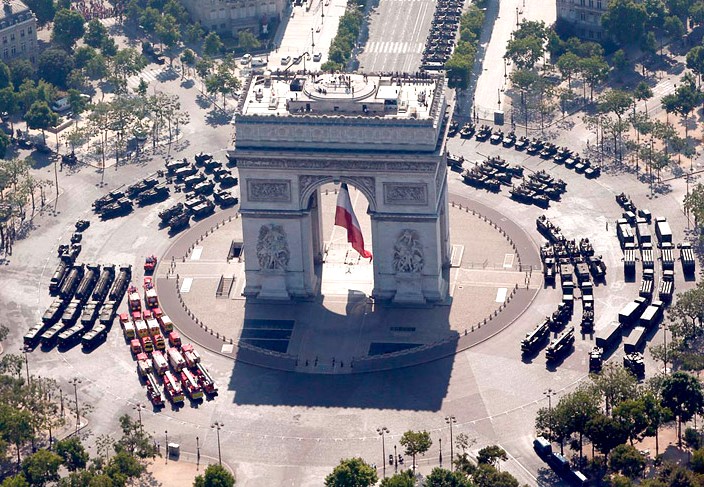 You can climb the Arc de Triomphe to gaze at the beautiful complex of exquisite mansions surrounding Place Charles de Gaulle, and just to admire the view of a good half of Paris.

The ticket to the top of the arch costs 9.5 euros, though you will pay only 7.5 euros in a group. I think your tour operator will collect the appropriate number of wishing. Children and teenagers under 18 years old are free of charge, as long as they come with their parents and are not in a group of schoolchildren.

But there is a “but”: the official website of the national monuments of France insists on compulsory booking – “at least a month in advance”. So ask the travel agency in advance to take care of your opportunity to see the Champs Elysees from a bird’s eye view. Or do it yourself on the Arc de Triomphe website . 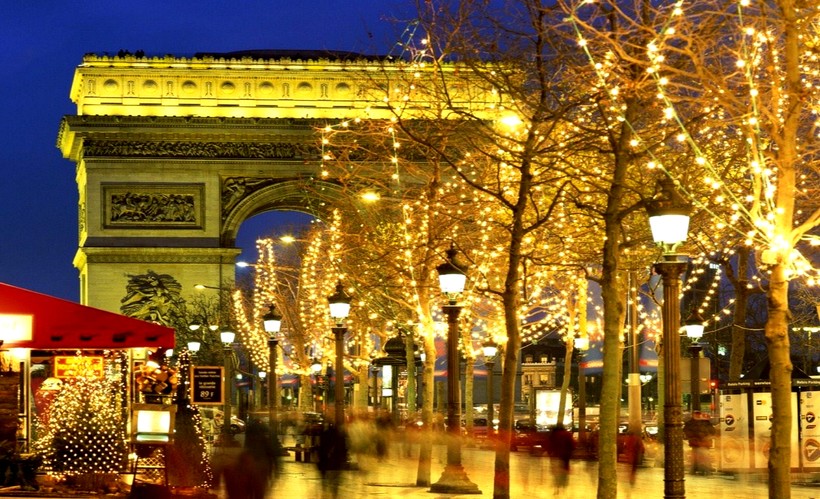 Well, let’s move on. Where do you want to go? What to see? Of course in the French capital you can (and should!) see everything at every turn, but since you ask … Well, let’s go to the Eiffel Tower . You don’t even have to look for it – there it is, soaring above the rooftops of Paris.