Just north of Geraldton on the coast of the Indian Ocean is the small town of Kalbarri, home to one of Western Australia’s most popular national parks, Kalbarri National Park. Kalbarri is located at the mouth of the Murchison River, the second longest river in Western Australia. You can stay here for a couple of days, swim in the warm sea waters and explore the beautiful and interesting places of the local National Park.

The Indian Ocean coastline in these parts is changing, and instead of endless sandy beaches, there are impressive cliffs made up of colorful striped sandstone along the shoreline. South of the town of Calbarri, the coastal cliffs extend for 13 kilometers to the southern border of the national park. On the seashore, you can see some interesting rock formations created by sea water and wind, including the small island of Island Rock, which used to be part of the coastline. Not far from this island on the coast there is a small natural arch (Natural Bridge), which in the near future will also become a separate island.

The park has paths all along the coast and you can walk along the rocky shore and visit several interesting places, one of which is called Mushroom Rock. There are several mushroom-shaped rocks carved out of the coastal sandstone by the surf.

Another place called Pot Alley where some big and small round-shaped stones are scattered around as if someone made a mess of them. It is a very unusual place, you will rarely see so many similar stones in one place.

The Murchison River Gorge is about 80 kilometers long in Calbarri National Park. On the lower reaches of the river on the high, rocky riverbank are lookouts and trekking trails for hikers to explore the natural beauty and gorges. These wonderful places will appeal to true fans of wild and unspoiled nature.

The sites are very beautiful and there are good views of the gorge and the Murchison River from the top. The Murchison River dries up in the hot Australian summers, with rainfall mainly upstream during summer cyclones, so for most of the year the river is a drying, sandy riverbed with numerous pools and ponds.

There’s a lot of wildlife in Kalbarri National Park, but it’s hard, if not impossible, to see any of it. The most common animals in the park include kangaroos, emus, echidnas, spiny devils, and a large population of birds, including raptors such as swift-tailed eagles.

The park’s most famous attraction is considered Nature’s Window, which looks like a small natural archway. All the tourists and visitors of the park like to take pictures here.

The town of Kalbarri itself has a nice beach, Chinamans Beach, where all tourists and locals without exception rest and swim.

Calbarri also has a very good tradition: every morning at 8:45 a.m. the pelican feeding begins on the seashore. The park rangers bring a bucket full of fish for the birds and tell the audience about the pelicans and their way of life. Many children and adults gather for this performance and everyone can feed the pelicans with fresh fish, and of course you can take pictures of this fun event and be photographed with these huge birds.

A guide to the coastal town of Calbarry, Australia 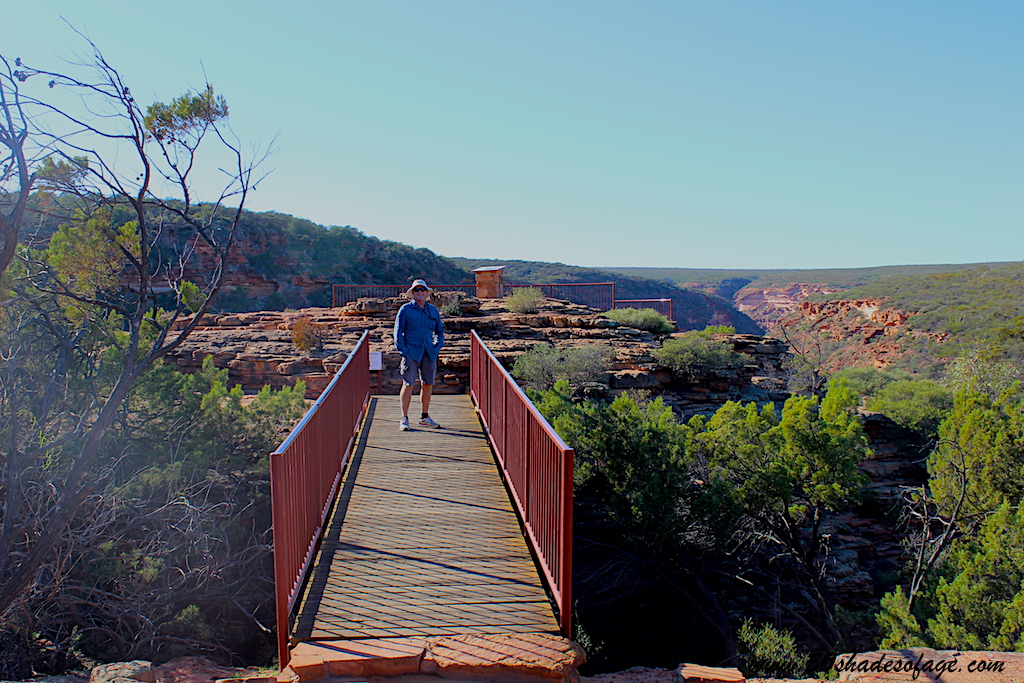 Why go to Kalbarri?

The 100 metre city skyscraper, the breathtaking views from Nature’s Window and Z-Bend, the wild and rugged gorges of the ocean that sweep down to the beaches including Pot Alley and Red Bluff, Surf at Jake’s Point, snorkel at Blue Holes, fly over Pink Lake, relax in the tranquil urban lagoon and lookout point at Meanarra Hill. 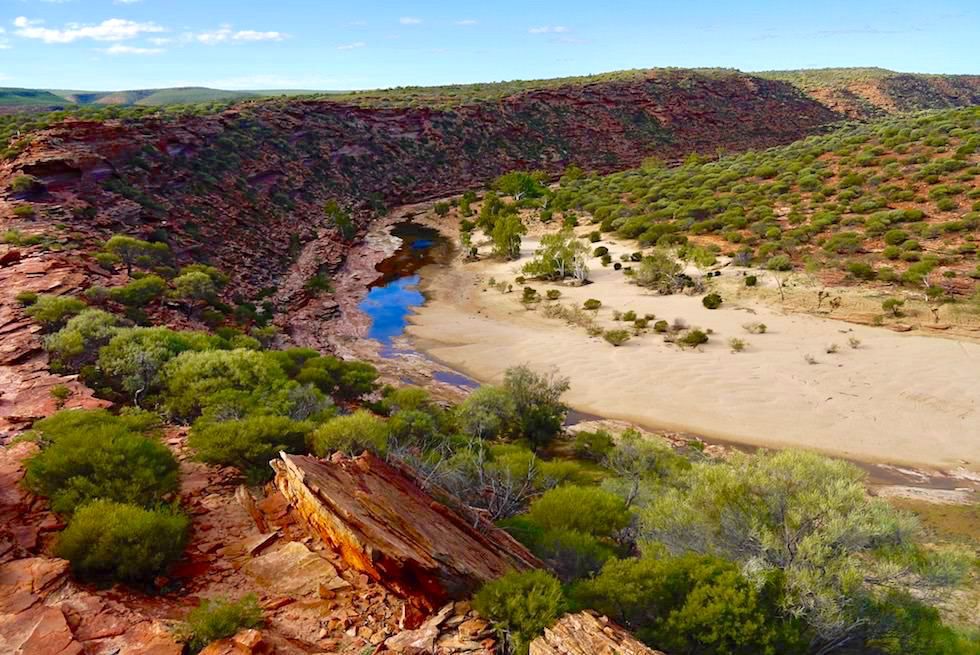 When is the best time to travel

November-March: Very hot, dry and windy; flies are a problem but it’s a great time to go snorkeling, paddleboarding, barbecuing on the beach and flying kites. April through October: carefree days, perfect for hiking, camping and water sports. Watch for whales (June-November) and wildflowers (July-October).

You can do a lot in two days, but you’ll want to stay in town longer. Stay for five days to explore at a more leisurely pace. 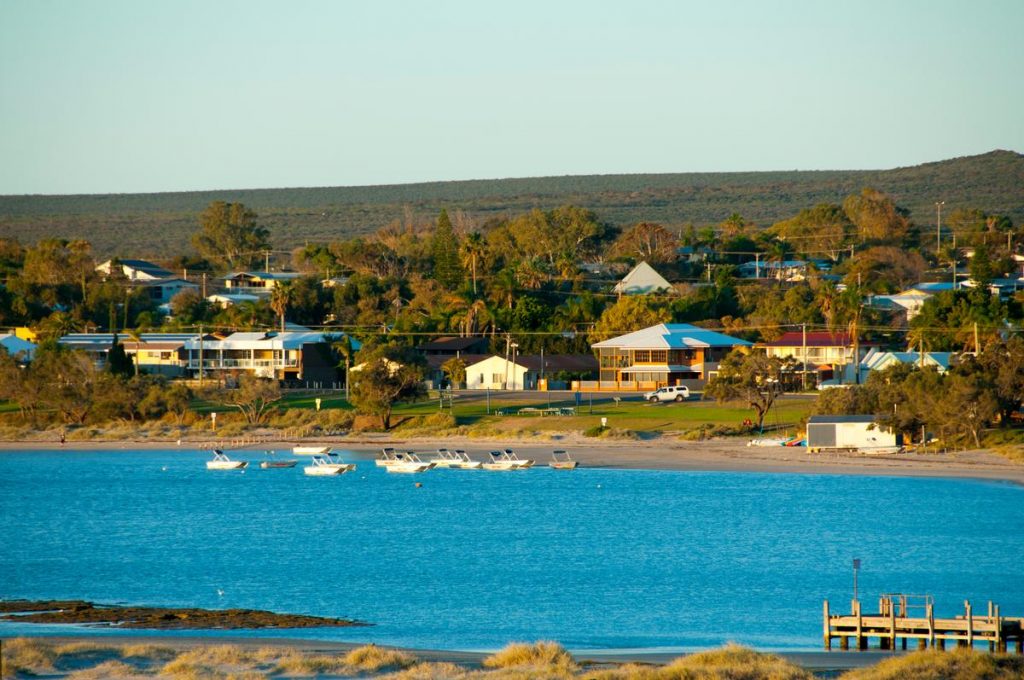 Length of stay in town

There are two gas stations in town, and another one is usually cheaper when you drive toward Skywalk . Phone service is good, as are the roads. You will find three pubs in town. There are small public markets on Mondays during the school vacations. There’s an excellent children’s playground on the Calbarry shore next to where the pelicans feed at 8.45am on most days.

Some facts in a nutshell

– The city has a population of1557 people. – The indigenous population is the Nanda. – Advice from seasoned travelers: Find the best coffee in Kalbarri and a lively social scene at Bean Drifting , a coffee truck parked at Jakes Point from 7:30 to 11:30 am most days. Bring a lounge chair and sit watching surfers and whales in the water . This place is great for dogs. 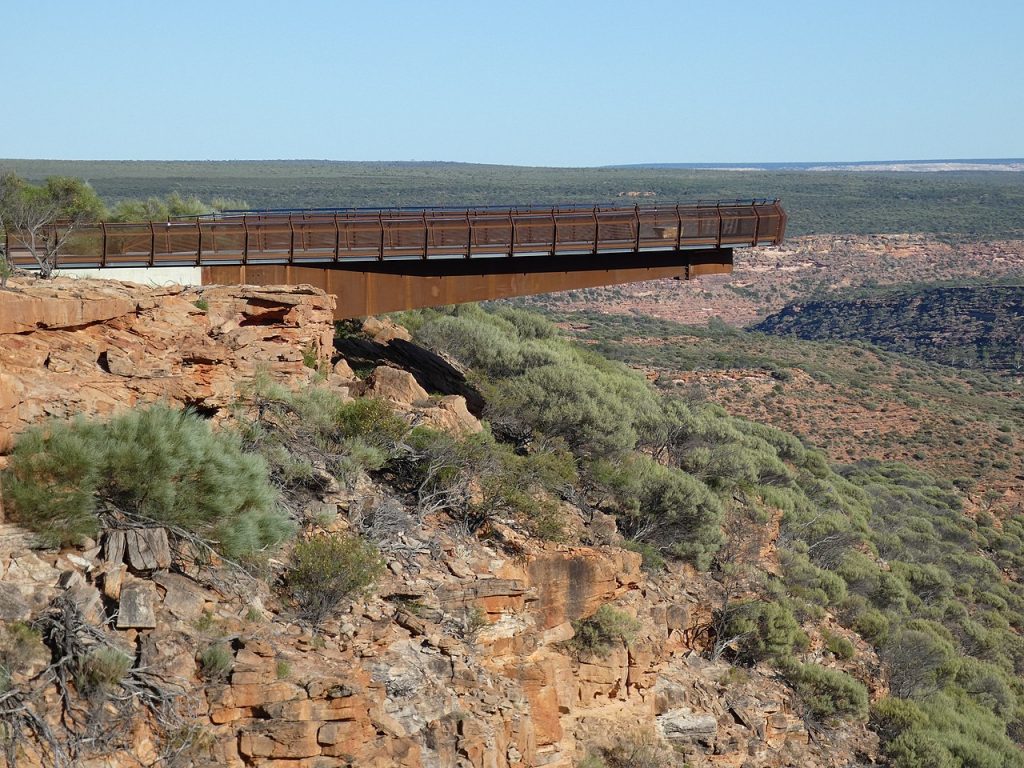 The Kalbarri Skywalk, located on the edge of the bluff, extends 25 and 17 meters from the edge of the Murchison River Gorge. You can watch through half of the decking, which enhances the feeling of floating 100 meters above the ground. Naturally, the views are comprehensive. This $24 million addition to Calbarry National Park opened in mid-2020 and is a short walk from the parking lot. The trail is dotted with strikingly realistic wildlife (you won’t be fooled by the spiny devil lizards) and stone seats made from local cobblestones. The story of the region’s natives, the Nanda, is told through decorated sticks with messages for children to play bells on, as well as a clairvoyant snake woven into the trail, photographs and well-composed information on signs leading to the Kalbarri Skywalk kiosk. It sells good coffee, interesting scones and expensive pies . It costs $15 per car to enter this part of the national park. 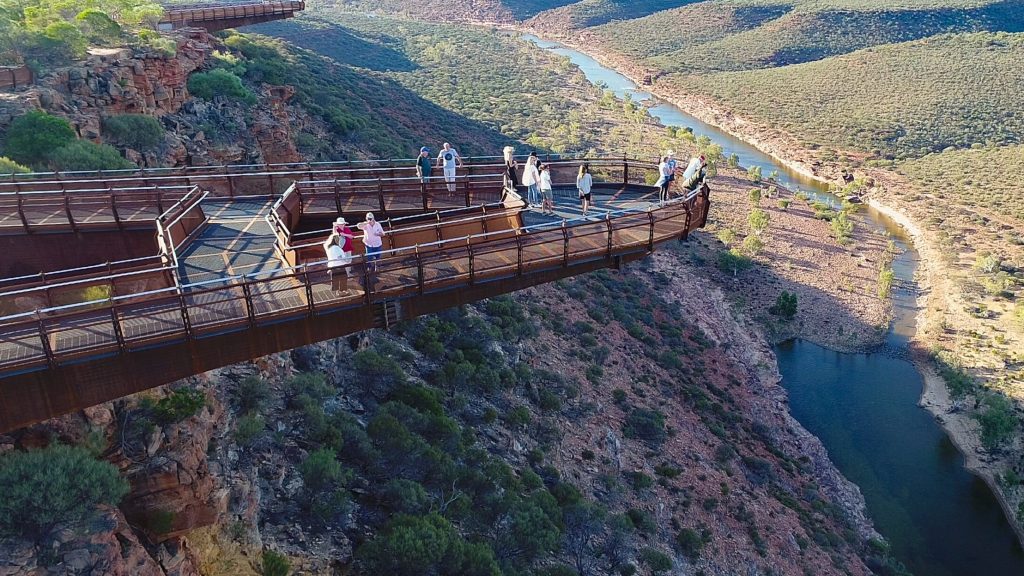 Check out Nature’s Window, an arched rock formation that literally frames the riverbed and gorge walls 150 feet below. Take a family photo, then head to Z-Bend Lookout, which overlooks the dramatic bend in the Murchison River.

The Loop is a moderately challenging 8-kilometer hike departing from Nature’s Window. It runs along the edge of the bluffs and then descends to the river bed. It will take you about four hours to complete the entire loop. You can try the easy part at the beginning and the challenging part at the end to the Z-Bend Lookout and the river. The easy part is a 1.2 mile walk to the lookout overlook overlooking the Murchison River Gorge. Then the descent into the gorge over rocks and steep stairs becomes much more difficult. 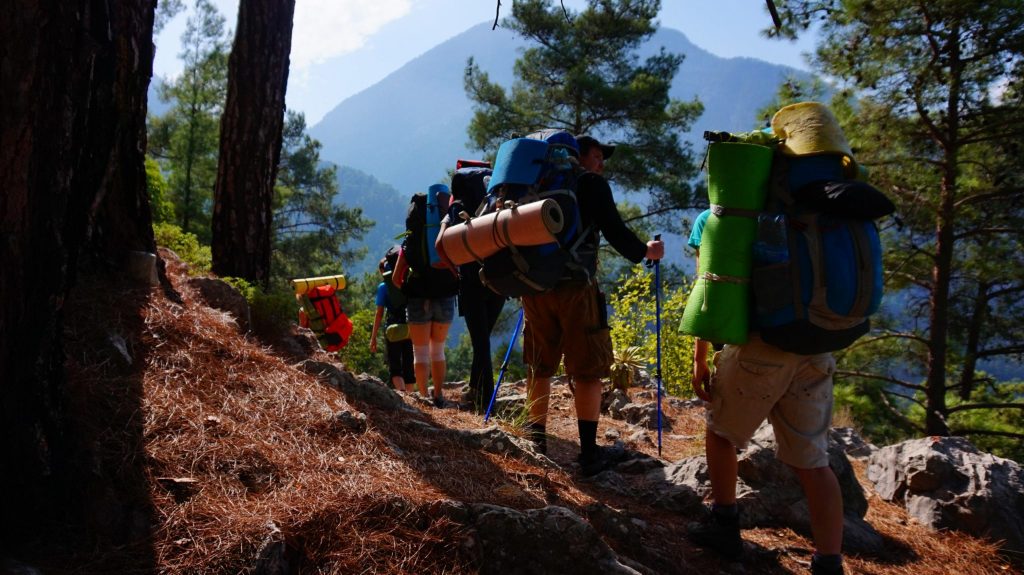 Summer temperatures can be extreme, so much so that the Loop Trail closes after 7 a.m. from November through March . Plan a hike from May through October and hike early in the morning , wearing headgear and appropriate footwear.

The 13 kilometer stretch of coastal cliffs of Calbarri is a highlight for many. The cliffs are rugged in swirling patterns and painted in faded reds and earthy yellows. Drive from town or follow the paved walking (biking) path to many of the listed landmarks. Walk 400 meters down the Potting Alley to a beach bordered by layered rock that looks molten in places, or sit at sunset near the parking lot and watch the gorge glow with amber light. 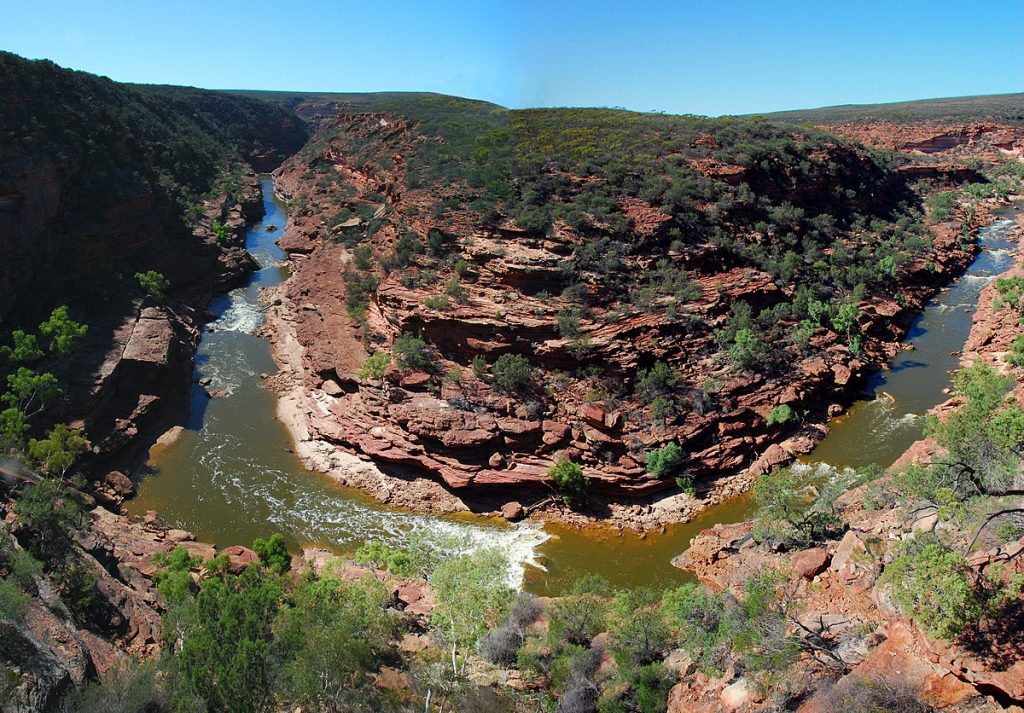 Red Bluff, Mushroom Gorge, Island Rock, Eagle Gorge and Natural Bridge are all worth a visit. Walks in this area include the Mushroom Rock Trail and the Bigurd Trail. Keep an eye out for wildflowers.

READ
Restaurants and pubs in Antwerp

Experienced surfers will love the reef break at Jakes Point, and there are fast reef barrels at Blue Hole’s. Closer to the sand at Blue Hole’s, you can go snorkeling in a protected natural aquarium. In town you can canoe, kayak, paddleboard, boat, fish, etc. (You can bring your own equipment or rent it from Ultimate Watersports in Geraldton). The town’s lagoon, where the ocean meets the river, is ideal for paddling. Away from the water you can go skydiving and ATV riding. 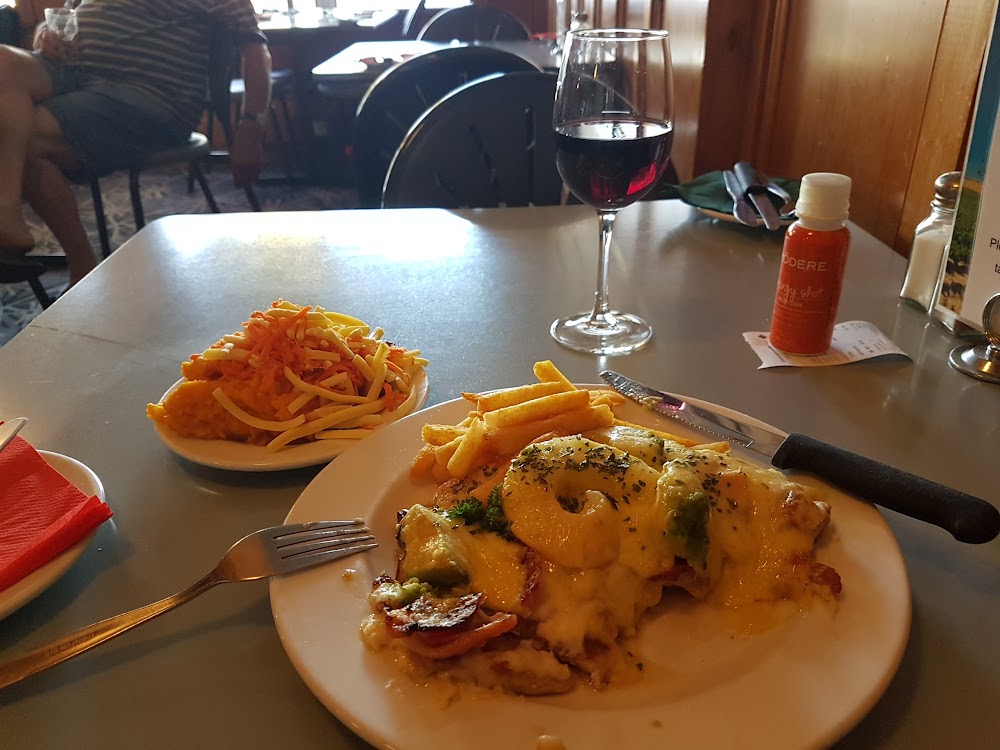 There are plenty of restaurants in Calbarri: The Gorges Caf is recommended for breakfast, Angie’s Cafe for the best hot chips and the very popular Buddha’s Bites for an unforgettable Asian dinner (think scallops with burnt butter on mashed cauliflower and herb salad with a sticky glaze and bits of pork belly). If you like to dine on camelback, roe and emu, check out Dirt, Dust ‘n Diesels at Kalbarri Resort, a restaurant converted into a shearing barn.