Reviews about Georgetown based on personal experience. Pros and cons, personal impressions, what you liked and didn’t like about the trip. Who should pay attention to this city, whether (Malaysia) is suitable as a place for family or youth vacation. The main attractions and entertainment, what the city of Georgetown is famous for. Tips and tips for those who plan to visit the city for the first time.

Ask me which Southeast Asian city I like best, and I’ll definitely name Georgetown Malaysia. Why? Lots of entertainment and attractions, unusual architecture, street art, and this city is also a gastronomic paradise. But first things first.

When you first enter the city, it is difficult to describe exactly where you are. Colored shabby houses, paper lanterns, signs in Chinese, the smell of Indian spices and a lot of rickshaws rushing through the narrow streets. You feel like you’re transported to another century or you’re on the set of a movie. Georgetown is so beautiful that you just want to wander its alleys without purpose. But the 40-degree heat and streaming sweat forced me to make a plan of action. One that would keep me from melting under the scorching sun at the hottest part of the day. 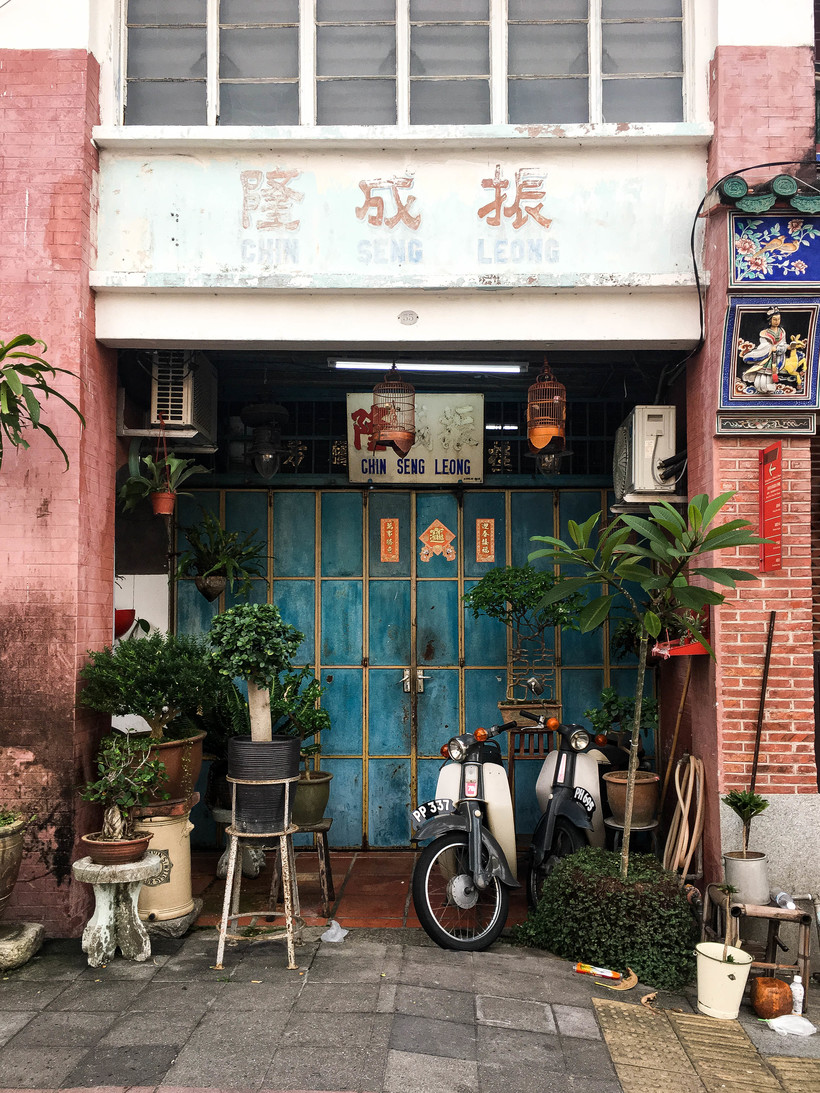 The first thing I was advised to do was to look for the many graffiti signs scattered around the city. At each hotel you can find a map with points to navigate. The graffiti are scattered in different parts of the city. So as I walked from point to point, I came across mosques, pagodas, and Hindu temples along the way. All on the same street! It’s hard to believe the harmony in which people live in Malaysia. While muezzins invite Muslims to pray, Hindus hold colorful ceremonies and the Chinese burn incense on their doorsteps. 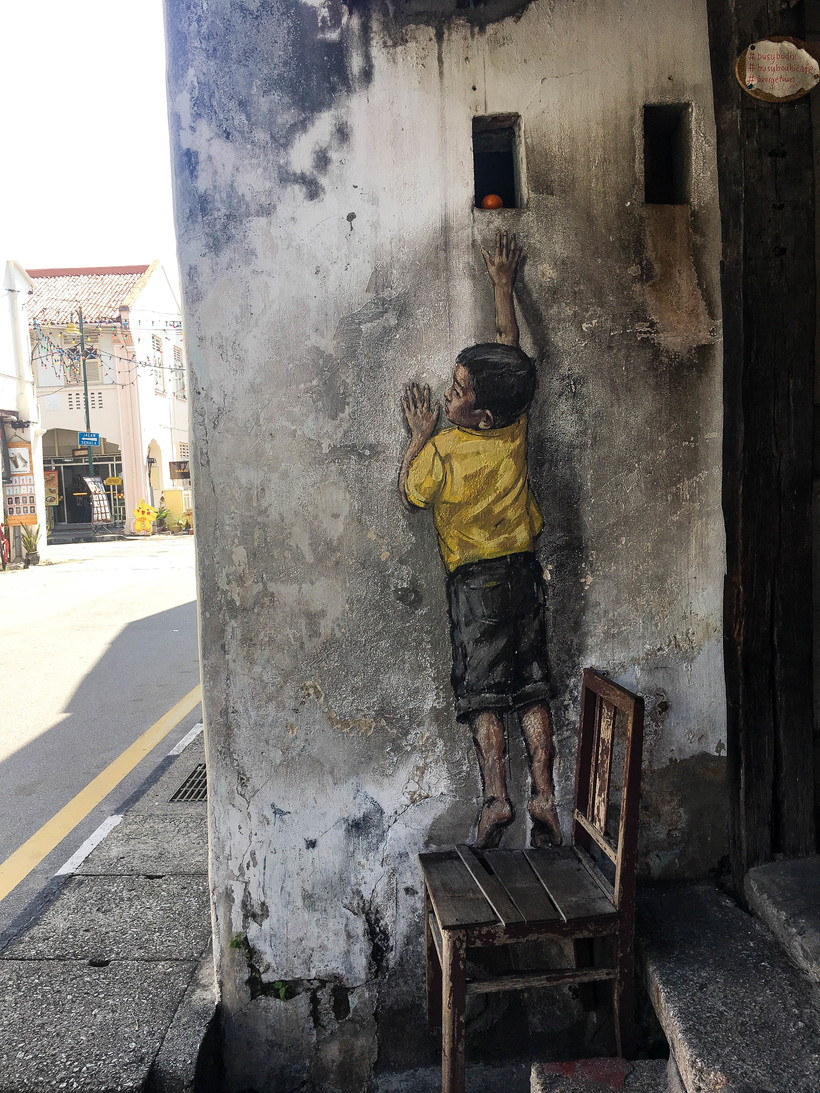 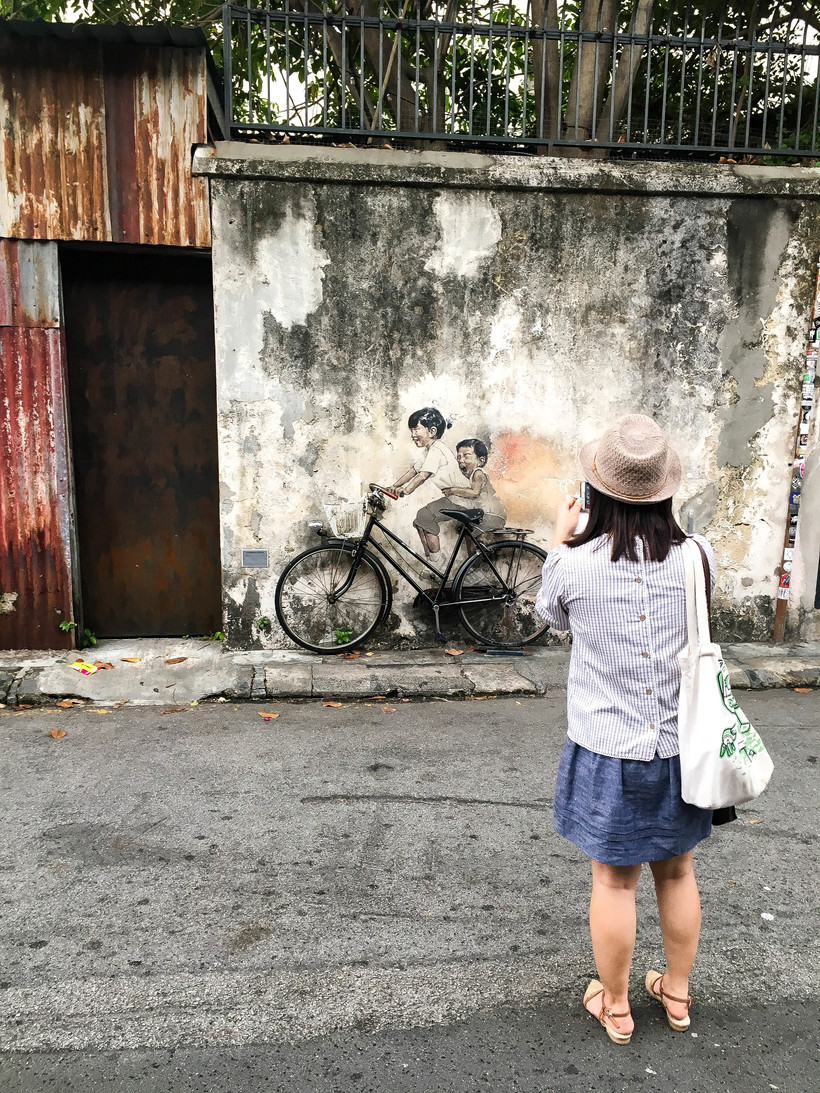 In the middle of the day, walking the streets became impossible, and watching tourists posing by the walls with graffiti was boring. So I went to see the colonial mansions – Pinang Peranakan Mansion and Colonial Penang Museum. Both museums are quite entertaining. Lovers of history, antiques and all sorts of strange things will be especially interesting. 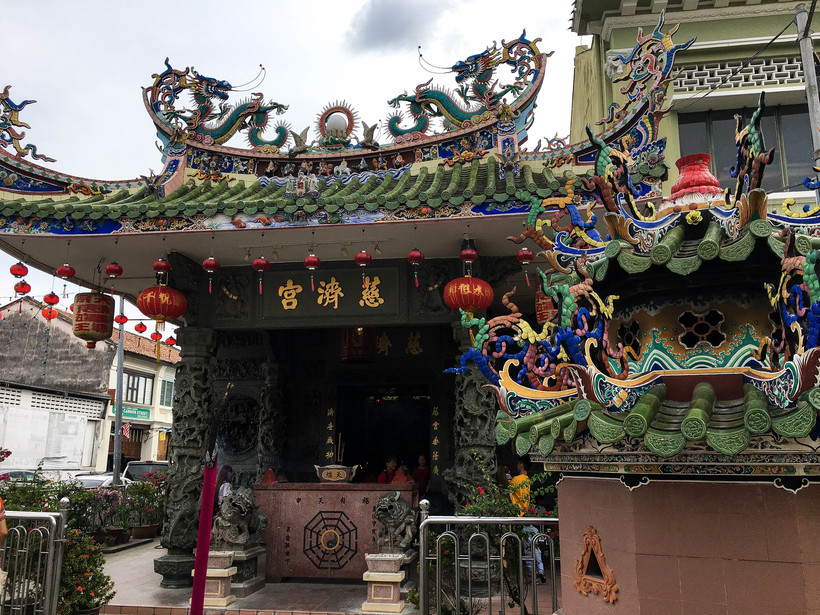 Chinese Temple on a Street

Georgetown is a city of creativity. Here you can not only visit galleries and look at street art, but also learn how to paint. Some shops teach hand-painted batik or offer to make something with your own hands (bracelets, earrings, etc.).

What else is there to see?

The food in Georgetown I would dedicate a separate article and even write an ode to. One of the locals shared that people from the capital often come here for the weekend. Why? Just to eat good food! It’s only five hours by bus or half an hour by plane, and you’re transported from Kuala Lumpur to gastronomic paradise.

Plus, the prices in this paradise are more than affordable. For only $2-3, you can eat local delicacies.

The best things to try:

I would like to point out that the interior at each of the places in town deserves a separate mention. One of my hobbies has been to go into cafes and stores to gawk at the beautiful baked goods and interesting designs. 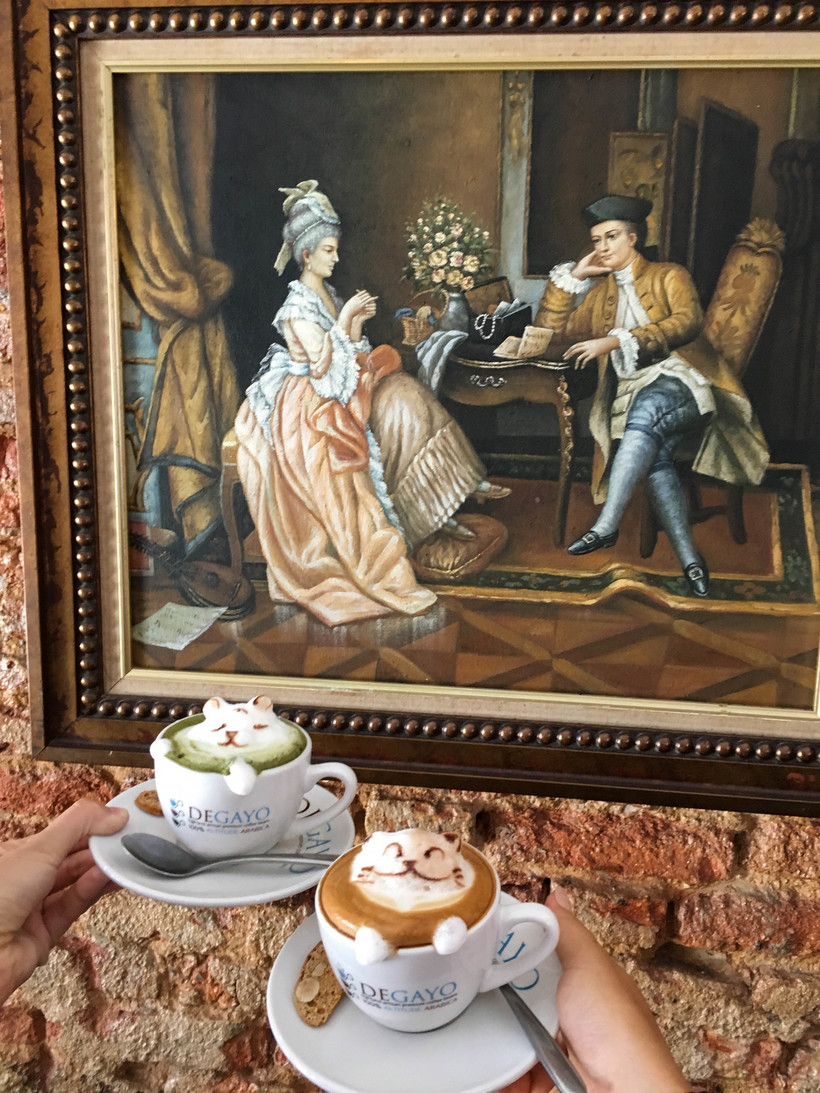 Coffee can be art, too.

The only thing I didn’t like was the painfully slow wi-fi and the debilitating heat. Moreover, the wi-fi is so slow that it is difficult to download videos on YouTube, even in the lowest quality. And the heat is so scorching that the local vendors dry fish and shrimp right on the sidewalk in front of the store.

As a girl traveling alone, Georgetown seemed very safe to me. The locals are friendly and never looked crooked or refused help. 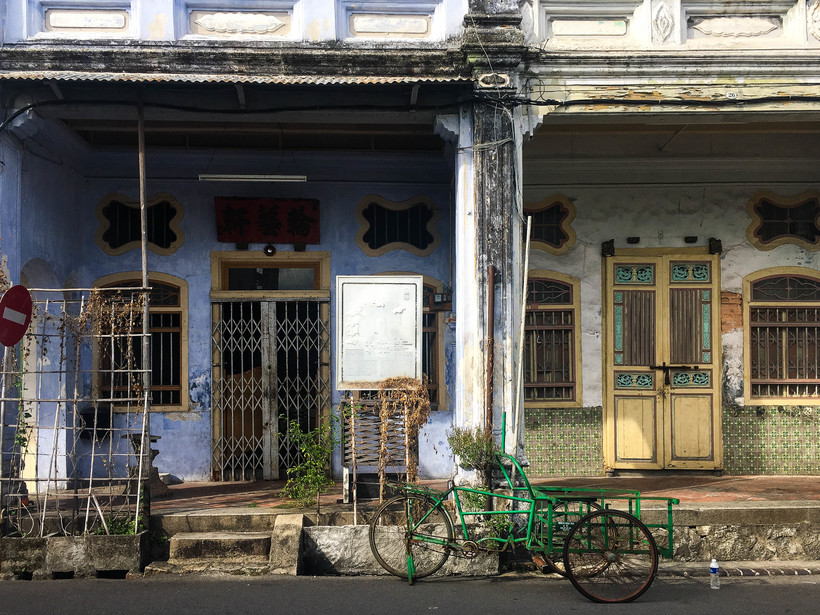 Doors as a work of art

Getting around the city can be done on foot or by bus. Many tourists rent a bicycle or scooter (prices are very affordable).

Is it worth the trip?

Georgetown is definitely worth a visit. A gastronomic Mecca, a center of street art and a place where dozens of nationalities live in harmony. If you’re ever in Malaysia, make sure you stop by! 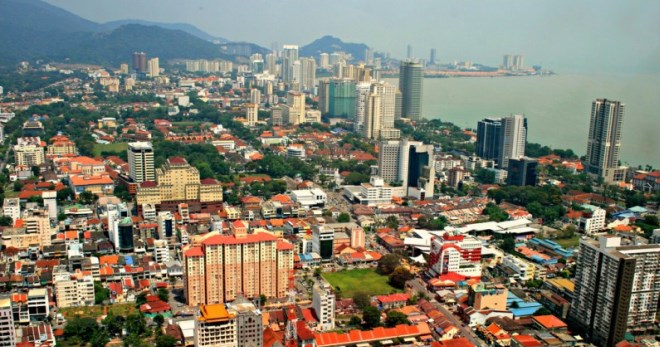 In the marshy part of the island of Penang in Malaysia, the city of Georgetown was founded in 1786, christened after King George III of England. Now it’s one of the cleanest cities in the Malay Archipelago and its attractions are protected by UNESCO.

Georgetown’s population is made up of nearly 300,000 Chinese – or more precisely, descendants of the Celestial Empire who came here to conquer the land. Thanks to this you can hear the Chinese language everywhere. In the city peacefully and harmoniously coexist buildings in the classical English colonial style, the Chinese and Hindu temples, old buildings two hundred years ago and modern skyscrapers of glass and steel. 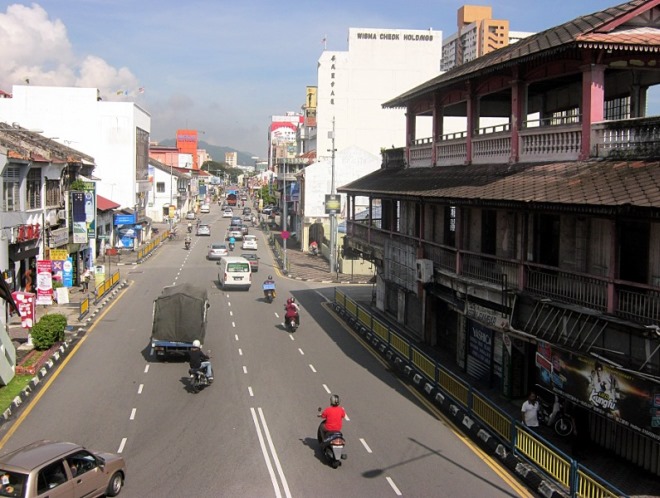 The island of Penang itself, where Georgetown is located, lies near the mainland of Malaysia and is connected to the land by a bridge. The city is the capital of the state. There are plenty of things to do and places to see in the city so there is plenty to keep you occupied during your time off. 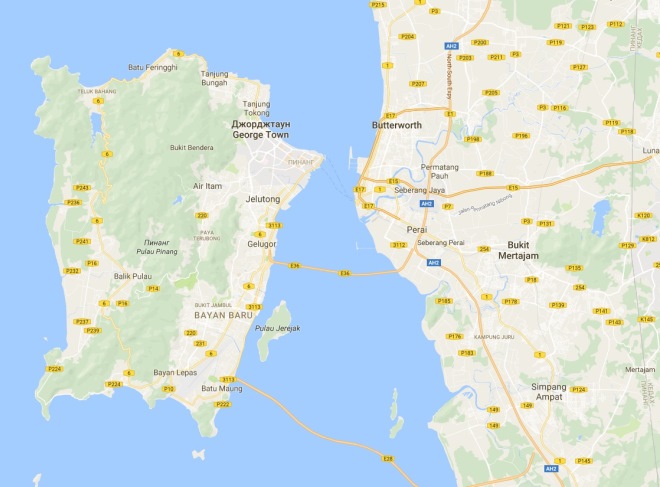 Because the island is located in the equatorial zone, the climate is 90% saturated with moisture and the temperature during the day never drops below 30 degrees Celsius. At night there is a welcome coolness, +22 ° C all year round. You can vacation here in any month, but you should keep in mind that the rainy season lasts from September to November, and then the humidity reaches a critical point, which is not always well tolerated by visitors. The second time it rains is in May, but at this time of year the climatic cataclysms are easier to bear. 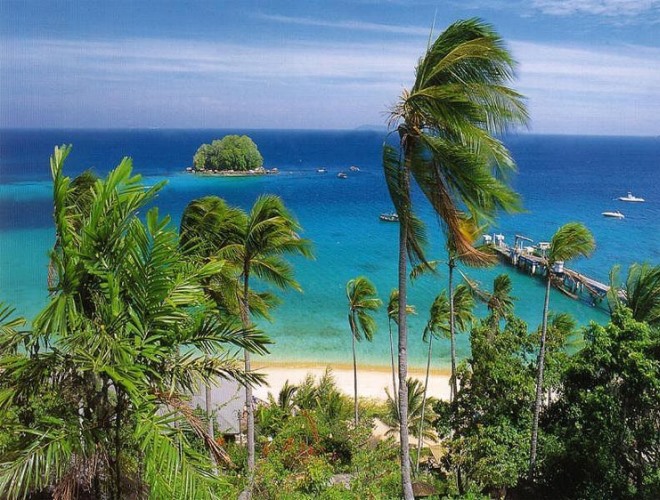 Attractions and Entertainments in Georgetown, Malaysia

Experienced travelers advise to stay in the city itself, rather than go here on a tour, because there are so many tourist spots here. Here is what you can see in Georgetown:

You can stay in Georgetown in both budget ghettos and expensive apartments:

Like the rest of Malaysia, Penang has a cult of national cuisine. People here treat the process of eating very reverently and elevate it to the level of a ritual. Along with the traditional cuisine, you can taste any dish from every corner of the world, but the most popular place to buy food remains the grocery carts and kiosks with simple but very tasty food located in the streets of Georgetown in huge numbers. Here’s where to sample street food:

Shopping in the City

Good shopping in Georgetown also requires good bargaining skills. Shop here at local markets or high-rise malls, depending on your preference and the thickness of your wallet. From here you can take souvenirs as souvenirs:

Georgetown’s excellent transit system makes it easy to get around. And it’s all free to get around on the MPPP CAT buses that run on a Hop-on-Hop-off basis. There are three such buses on the route, which make 20 stops at the most popular tourist spots. Other options are to take a simple or luxury cab (significant difference in price and quality of service) or a bicycle rickshaw. 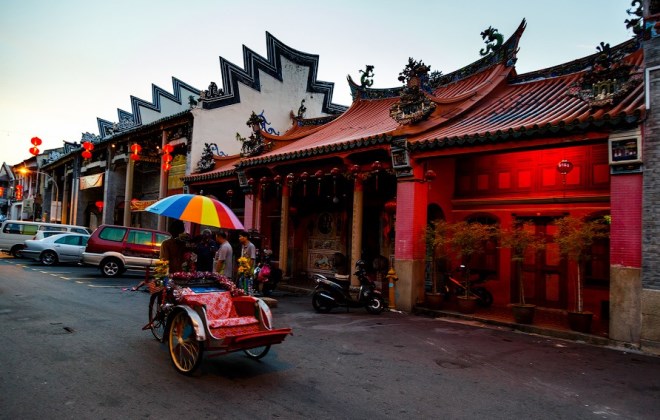 The area itself, where Georgetown is located, is on a map of the country and is easily accessible by both air and water. Georgetown Airport, located 16 km from the city, receives many international and domestic flights daily, so getting to the island is not a problem. From Kuala Lumpur, it’s only a 45-minute drive.