9 things to see in Beziers, France

You can see the main sights in Beziers on a tourist itinerary or just as a walk through the city in about half a day. 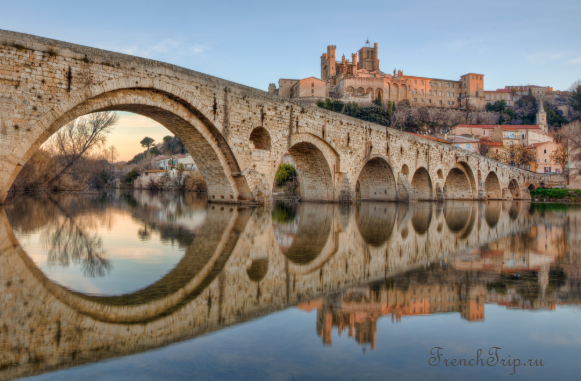 The 12 main sights of Béziers that should not be missed:

Situated on top of the city of Beziers, Saint-Nazaire Cathedral first became an Episcopal seat in 760 The original site was a Roman temple, then a Romanesque church, which was destroyed during the sacking of Beziers in 1209. The current cathedral building dates from the 13th and 15th centuries.

Not to be missed: the panoramic view from the top of the central tower.

From the unfinished cloister of the cathedral you can enter the Jardin des Evêques (Bishops’ Gardens). They are made in the form of terraces overlooking the valley on the river Orb and the Mediterranean Sea. 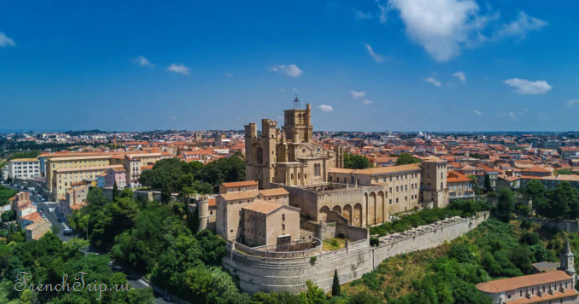 The church is named after St Jacques (St. James) because it is on the pilgrimage route to Santiago de Compostela. The original building was made in the “Carolingian Romanesque” style (very early 10th century, columns and capitals located both inside and outside the apse). After reconstruction in the 12th century and some changes made in the 18th century, the church changed its appearance, but after a recent renovation it regained its Romanesque character.

The garden of the church has a splendid view of the valley of the river Orb and the cathedral of Saint-Nazaire.

The oldest church in Beziers (9th century crypt). Originally a Romanesque building, it was rebuilt several times. The church was recently closed for renovation work due to weak load-bearing walls. The church should open to the public in April 2015: first the crypt: then the baptistery, then the entire building.

Dating back to the 19th century, this cemetery is a testament to the success of Bezier’s wine-making families. Their mausoleums are decorated with weeping and reclining statues by sculptors such as Injalbert. It is Bezier’s answer to the famous Père-Lachaise cemetery in Paris, only with cypress trees and a view of the mountains…

Not to be missed: the statue of NotreDame-du-Moucadou, which grants wishes. 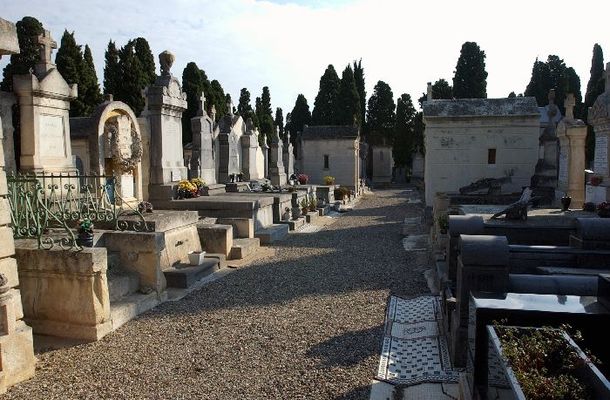 La Madeleine was the parish of the Consuls (the rulers of the city) from the 11th century. This Romanesque church witnessed the massacre of the locals in Béziers in 1209, during the Cathar era. Now the square adjacent to the church is a popular place to eat. Also popular is the covered market (Les Halles), built in 1891 in the ‘Baltard’ style and restored in 1986. Its stalls offer local specialties that can be eaten right there or tasted in one of the bistros.

6 Streets of the old town of Beziers

A labyrinth of picturesque streets diverges between the cathedral and the Allées Paul Riquet, winding between buildings that have been built and rebuilt so many times since Roman times.The single-story houses and terraces huddle close together, protecting them from the wind. If you look closely, you can see the typical Romanesque windows with central and double windows, the stucco decorations known as “génoises” and the various decorative columns which remind you of Bezier’s long history.

This street was created in 1827 on the site of a former backfilled moat of the city’s fortifications (which were demolished in the 17th century). Framed by restaurants, terraces and stores, this avenue is the main artery of Bezier. The statue of Pierre-Paul Riquet by David d’Angers (1838) towers over the street.

Not to be missed: on Fridays there is a beautiful flower market.

At the end of the alley is the Municipal Theater, built in 1844. With an auditorium that can seat 500 people, it is the only theater of its kind in France that has retained its ‘candy box’ interior. 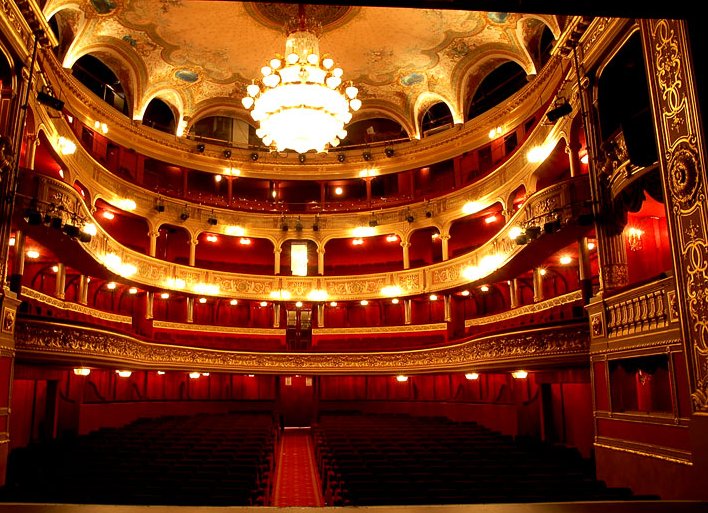 Built in the first century A.D. and renovated in 1992, the Roman theater of Bezier has only recently been restored, as has the medieval quarter surrounding it. These ruins of the ancient Roman 10,000-seat arena make Béziers one of the oldest cities in Europe.

To get to the Roman arena, walk along Rue du Moulin à Huile. Or you can see the amphitheater from above, from the Rue des Anciennes Arènes.

9 The New Arena of Beziers

The new arena was built in Béziers in 1897. Capable of holding 13,000 spectators, the arena is popular for bullfighting, but also for opera, concerts, and sporting events. At the beginning of the 20th century the arena earned Béziers two flattering nicknames: “The French Beirut” (for the opera) and “The French Seville” (for the quality of bullfighting).

At the Béziers Tourist Office in July and August, you can join excursions: ask for the “Olé Béziers” tour.

The Médiathèque André-Malraux is a magnificent building of three monoliths, 3 to 4 stories high, with glass and steel facades. Opened in 2008, the MAM (as locals call it) was designed by architect Jean-Michel Wilmotte, one of the best architects in the world (in 1981 he renovated the interiors of the Elysée Apartments, in 2013 he redesigned the Rijksmuseum in Amsterdam).

This bridge is not to be missed! A masterpiece of 12th century engineering, this bridge is 241 meters long with 15 arches. For a long time it was the only bridge over the river from Marseille to Toulouse! Charles VII and Louis XI praised it in letters to the consuls of Beziers, describing it as an “ancient, magnificent bridge, and a splendid triumph of construction”. It was listed as a historic monument in France in 1963. 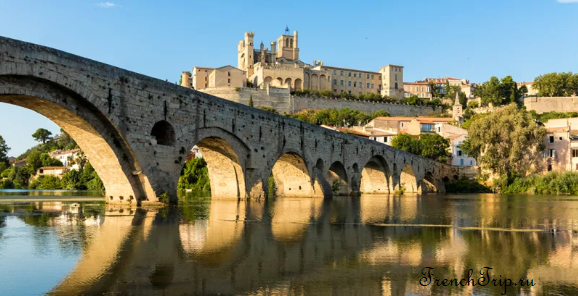 Originally named the Canal Royal-en-Languedoc (the Royal Canal of Languedoc) and renamed the Canal du Midi by French revolutionaries in 1789, the canal was considered one of the great construction works of the 17th century at the time. It is 240 km long. The canal connects the Garonne with the Etang de Tau on the Mediterranean Sea, and the 193-km long Garonne Canal forms the Canal de Merce, connecting the Atlantic to the Mediterranean Sea.

What is worth seeing in Bezier?

Located 12 kilometers from the Mediterranean Sea, Beziers is considered the real pearl of the department of Herault and attracts many tourists, especially in summer. In my opinion it is not very well known in CIS countries and therefore there are practically no Russian speaking tourists there. And it is for nothing. The city is really very interesting.

Founded in the 7th century BC, it has kept much of its historical heritage and is happy to show its guests.

The main and most notable attraction of the city is undoubtedly the Cathedral of Saints Nazarene and Celsus (Cathédrale Saint-Nazaire-et-Saint-Celse de Béziers), towering over the Old Town and visible from many points. It was built in the 13th century on the site of an existing 8th century Gothic temple and has remained virtually intact to this day. It was considered a cathedral until the 19th century, when in 1801 the diocese of Beziers was united with the diocese of Montpellier and the bishop’s pulpit was moved to the larger city. Today, however, one is free to go inside to enjoy the majesty and power of this cathedral. The somewhat gloomy walls, the ancient stained glass windows, the magnificent organ – all this fascinates and makes you speechless for a while. After a walk through its galleries, you can get to the courtyard and mini garden, from the observation deck which offers an indescribable view of the city.

READ
How to spend time in Kathmandu: information for tourists

Next to the cathedral is the Place de la Révolution, dedicated to the brave figures of the glorious days of French history, decorated in Gothic style. There’s also the beautiful and picturesque Place de la Madeleine, with its eponymous church of Saint Madeleine, built in the 11th century on the site of the massacre of women and children in the Dark Ages. 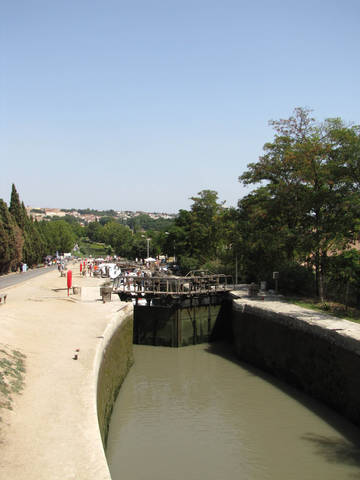 Le Canal du Midi, the city’s pride and joy, offers a unique link between the Mediterranean and many of the villages on the southern coast (it links Toulouse with the coastal city of Sete, and in Toulouse with the Garonne Canal, which links the Bay of Biscay). Spanning 240 km, the canal is a true masterpiece of engineering and attracts thousands of curious tourists. Its construction began in the 17th century, and since then it has been improved several times and in 1996 it was even included in the list of UNESCO World Heritage. After all, it is not just a water canal dug in the ground, it is a real engineering equipment with a system of locks, designed in the mountainous terrain to lower and raise ships to the right level for further progress. One of these sites is located directly in Beziers, so if you come to the city, you should definitely visit this place. 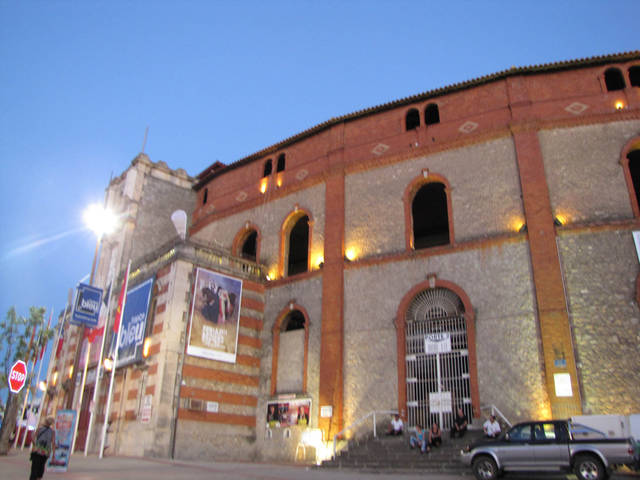 Another unusual sight in France is the Arena of Beziers, built in the style of an amphitheater for bullfighting. Do not be surprised. Being the most Spanish town in France, Beziers is probably the only place in the country where bullfighting (if I’m not mistaken, even killing a bull in the arena) is allowed, which attracts a lot of spectators during the season of such spectacles. There are two arenas in Beziers, the first of which appeared in the city in Roman times, the second was built in the early 20th century just for such competitions and is the largest building of its kind in France, capable of accommodating up to 13 thousand spectators.

Walking through the historic center of the city, you can just enjoy its wonderful architecture. The old buildings with rich stucco and unusual sculptures, the fountains and even the Roman bridge, which has been preserved in Beziers since ancient times, are worth a visit.

Many residents and visitors spend their free time in the city’s Park, which was created in the 19th century in the English style and is a great place for walks. Its real heart is the Titan Fountain, rising amidst neat alleyways.

Thus, there really is a lot to see in Beziers. Better yet, stroll through its narrow streets, breathe in the southern city and enjoy its incredible atmosphere.