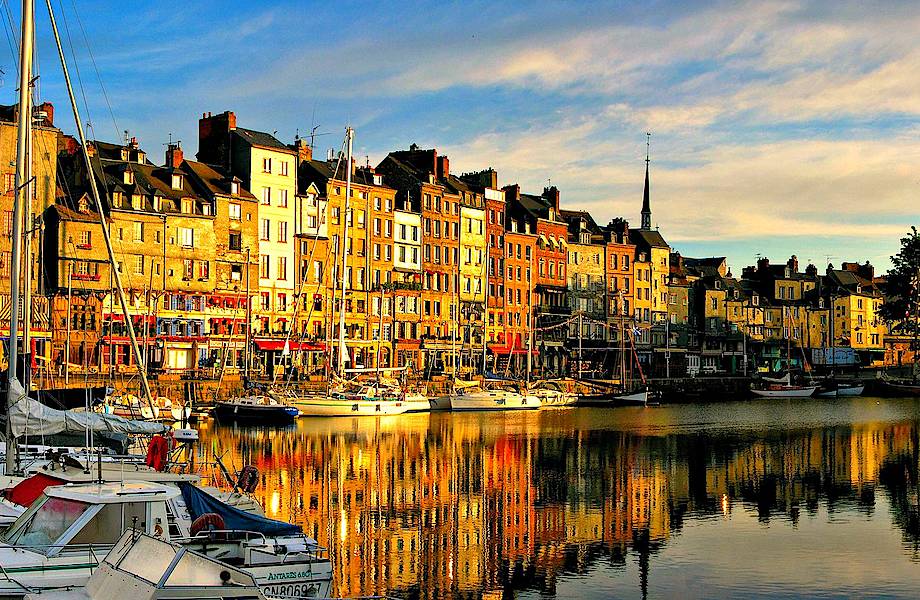 UNESCO World Heritage sights, a huge number of gastronomic specialties, 128 Michelin-starred restaurants, landscapes celebrated by the Impressionists – all this is Normandy. The province, which attracts up to 16 million tourists a year, is one of the five most important tourist regions in France. 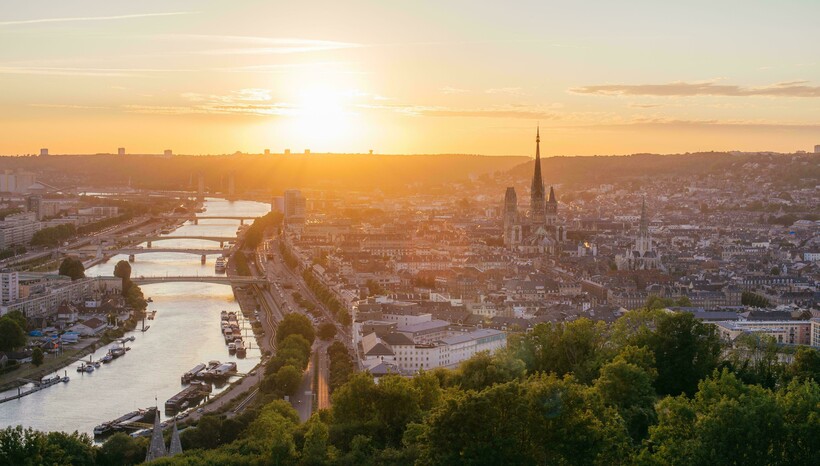 The main attractions of Normandy and all of France

All the peoples and events that have passed through Normandy over the millennia have left their mark. They remain to this day, from the medieval “comique” carpet in Bayeux about the adventures of William I to the memorial complex on the site of the Allied landings in 1944.

The Abbey of Mont Saint-Michel attracts 3 million tourists a year – the second most visited attraction in France after the Eiffel Tower.

According to legend, the abbey was founded in 708 by Archbishop Aubert of Avranches after he received a vision from the Archangel Michael. In the Middle Ages the abbey was a place of worship and attracted many pilgrims. They crossed the bottom of the sea on “low water”, but often fell victim to the treachery of the tides: dying in quicksand or drowning in a tidal wave that was then said to move at the speed of a galloping horse (6.5 km/hr, in fact). 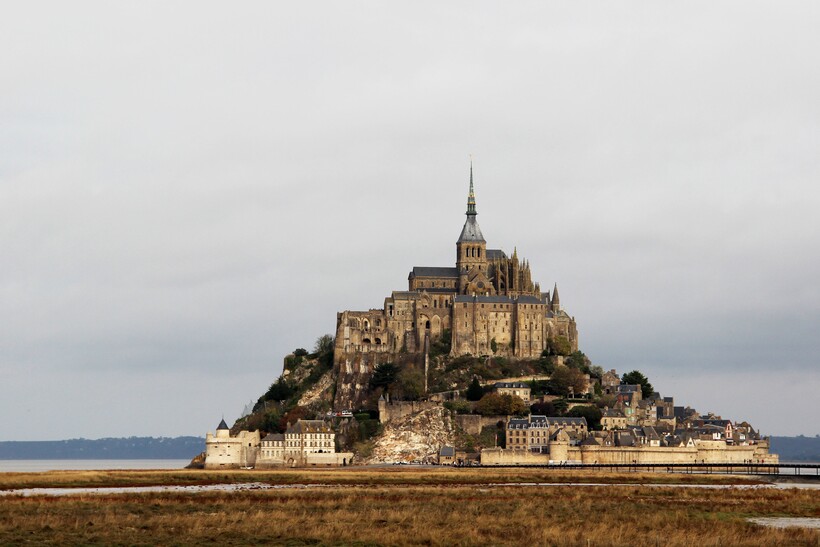 Mont Saint-Michel is the only elevation for many kilometers around. Author: Daria Ivanyushkina

Over a thousand years, a small town has sprouted up on the slope of Mount St. Michael. On the island, which is completely pedestrianized, tourists can visit:

In addition to the expressive medieval architecture, Mont Saint-Michel is also a natural wonder. This is where the highest tides in Europe are recorded. Several times a month they are extreme and several times a year they are dangerous. When visiting Mont Saint-Michel, one must realize that at high tide, the sea floods the gates and cuts off the abbey from the only way to land.

The old town of Bayeux is charming in its own right – postcard wooden-frame houses, a picturesque watermill, a monumental Gothic cathedral, a beautiful botanical garden. But Bayeux’s greatest treasure is a 70-meter tapestry that tells the story of William the Conqueror’s accession to the throne, from the reasoning behind his claim to the throne to the epic battle of Hastings. 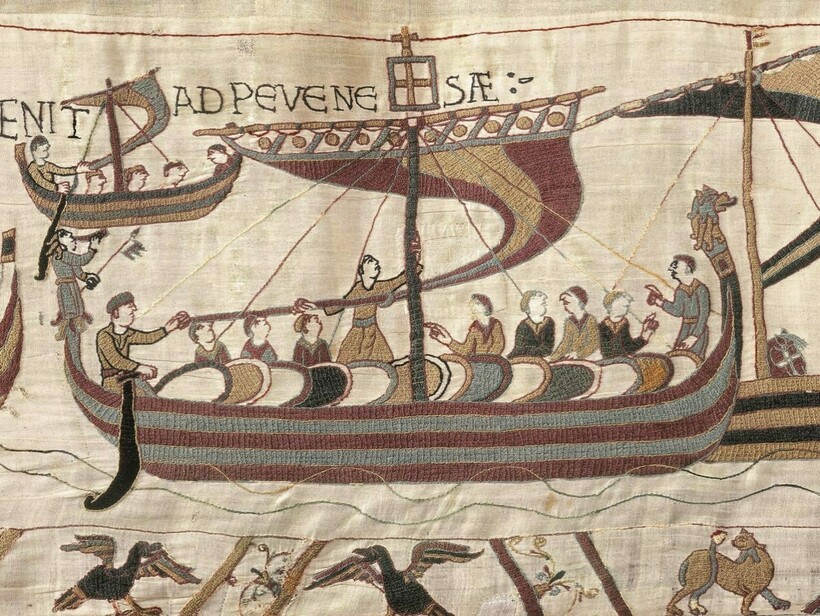 The Bayeux Tapestry is a world-famous monument to the march on England. Photo: bayeuxmuseum.com

The rug is a canvas of 58 scenes embroidered, according to legend, by William’s wife, Queen Mathilde. The tapestry is astonishingly detailed and historically accurate; it is not without reason that reconstructors study it with a magnifying glass.

The purpose of creating a masterpiece of embroidery was very prosaic – once a year the carpet was taken out and unrolled in front of the cathedral, so illiterate people could remember the exploits of their great countryman and glorify his valor.

The famous impressionist Claude Monet lived in Giverny for the last 40, most fruitful years of his life. Today, his small manor house has been restored and is open to the public.

Fans of the artist can visit his grave in the local cemetery. And if you want to continue your tour of the masterpieces of Impressionism, you can visit nearby museums:

Memorials to the Allied landings in Normandy, France

The first scene of Saving Private Ryan gives a glimpse of the dramatic events of June 6, 1944, when more than 4,000 Allied men were killed during the landing alone. 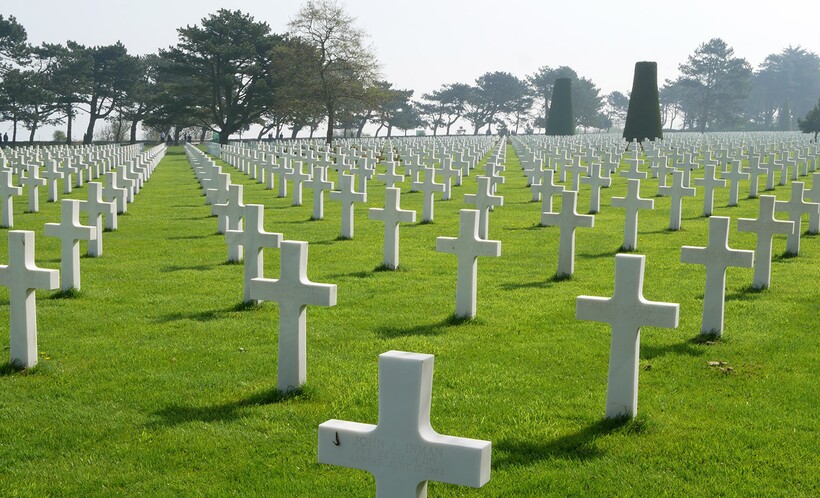 The American Cemetery at Omaha Beach is a monument to Allied losses in France. Photo: culturezvous.com

Today, memorials at these sites attract up to 400,000 American tourists a year. If you’re interested in these pages of history, it’s worth a visit:

In addition to war memorials, in the capital of William the Conqueror you can explore the 11th-12th century castle, which is among the largest in Europe, and several interesting Romanesque and Gothic churches.

The most beautiful cities in Normandy and Northern France

Every big or small town in Normandy is a little gem with amazing history and architecture. Let’s note a few.

Rouen – the most interesting city in Normandy

The capital of Normandy, Rouen was founded by Gallic tribes before Christ. Today its well-preserved pedestrian center with its timber-frame houses and Gothic churches allows you to take a little trip back in time. 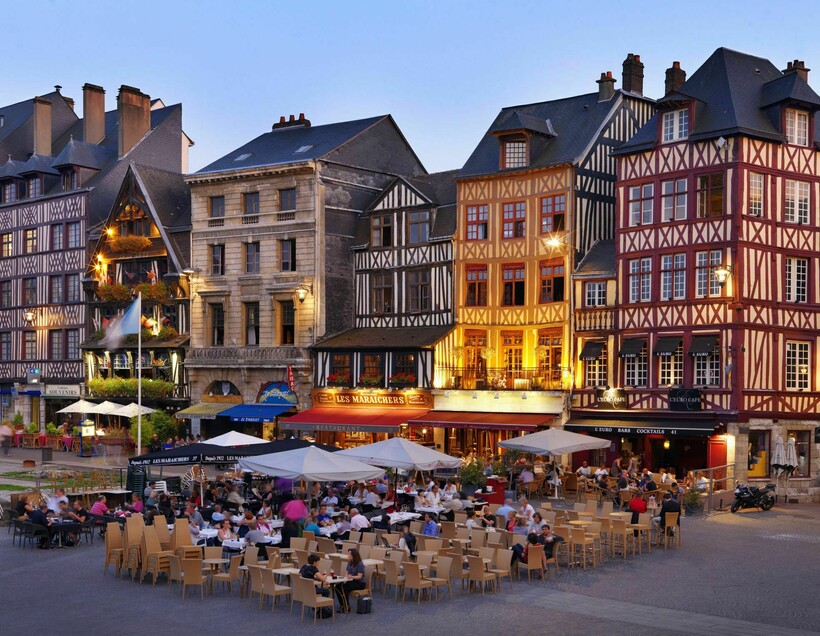 Rouen immerses itself in the atmosphere of the Middle Ages. Photo: tripsavvy.com

The main sights of Rouen:

Honfleur is the most beautiful city in Normandy and France

French old-world charm and a picturesque harbor on the Seine has brought Honfleur a well-deserved place in the list of the most beautiful cities in France. 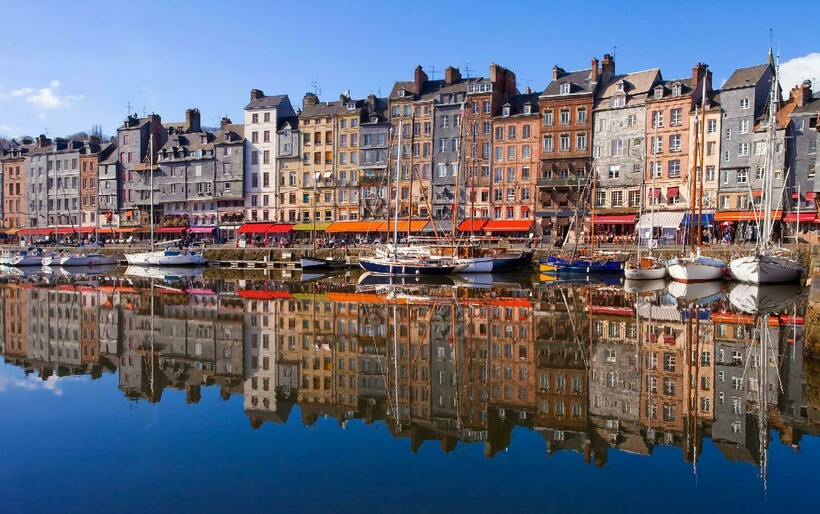 The main attraction of Honfleur is the old harbor. Photo: normandie-tourisme.fr

Tourists can walk around the old harbor and see the governor’s house of the 16th century, visit the Maritime Museum and the museum of Claude Monet’s teacher painter Eugène Boudin, see the amazing Church of St. Catherine – the oldest and largest wooden church in France, built by shipbuilders after the Hundred Years’ War.

Deauville and Trouville are the most resort towns in Normandy

Resort towns on the coast of Normandy that came into vogue back in the mid-19th century and created the concept of beach tourism. 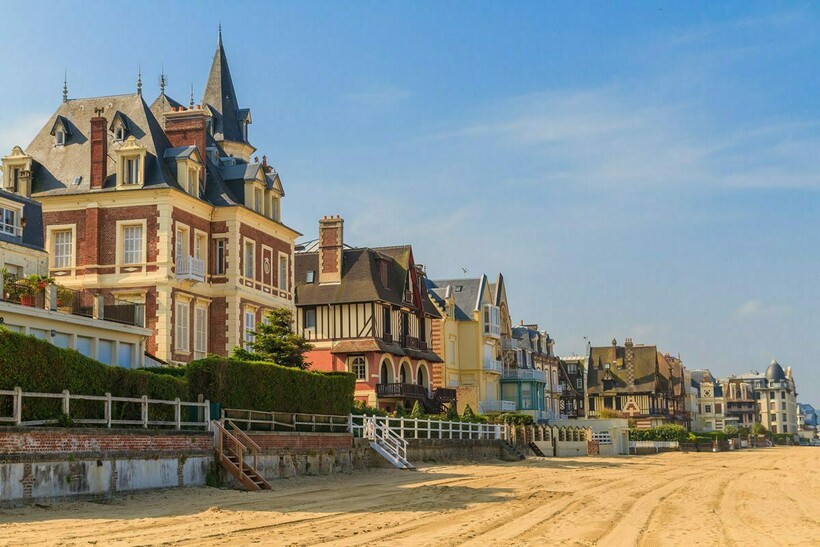 Deauville and Trouville are the best beach resorts in Normandy. Photo: normandie-tourisme.fr

Today, tourists still come here to warm up on the 2 km long beach and swim in the English Channel. There are other attractions associated with prestigious French resorts: fashionable boutiques, spas, exclusive restaurants. Deauville hosts the International Polo Championship and the American Film Festival.

Etretta is the most picturesque city in Normandy.

This small town is nestled by the famous chalk cliffs of the Côte d’Albâtre in Normandy. 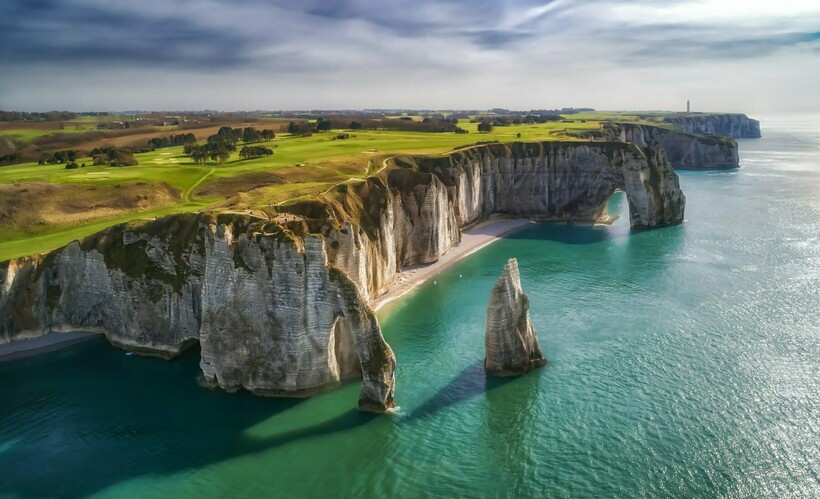 With 90-meter cliff above the city offers incomparable panoramic views. Claude Monet, who spent the winter of 1868 here, captured the landscapes of Etreta in several paintings, appreciated its beauty. In addition to picturesque nature, the city offers cultural attractions – beautiful villas from the Belle Epoque, including the house of Maupassant “La Guillette” (privately owned).

Normandy’s gastronomy is a symbol of Northern France

Like other regions of France, Normandy has its own gastronomic face. Every locality has its own gastronomic attractions – in Caen it’s stew of ox stomach tripes a la mode, in Mortan – black sausage, and in Dieppe – flounder. Compared with general French cuisine, the differences in Norman cooking are the love of fatty dairy products (the Normans add butter and sour cream to everything), the abundance of game and seafood, and apples and their derivatives in all forms. 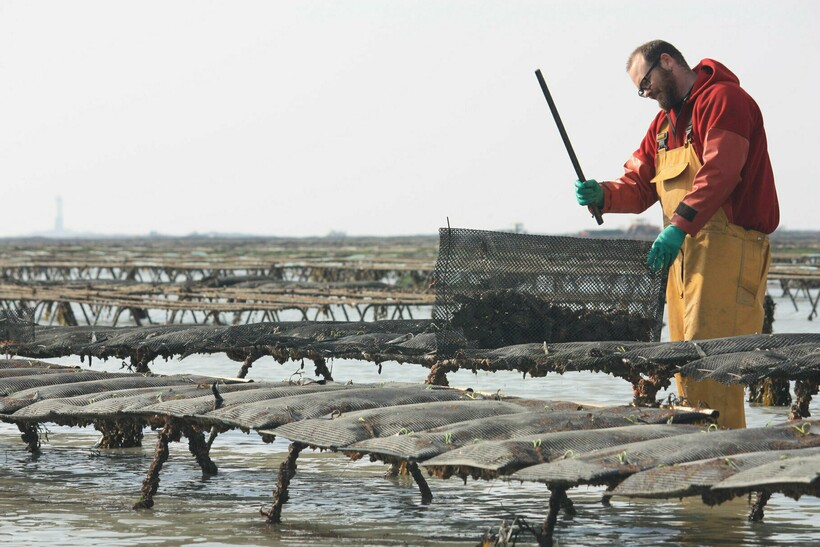 Sea farms in Normandy supply some of the world’s best oysters. Photo: sceadelisle.jimdofree.com

Normandy is one of France’s leading seafood regions. Fresh fish and seafood are available in markets and supermarkets like Carrefour. Yes, you’re not wrong, in Normandy you can buy a box (not a dozen!) of the freshest oysters right in the supermarket. The fleshy, nutty Normandy oysters of the Isigny and Saint-Vaast breeds are especially prized by connoisseurs. If you want to, you can visit one of the oyster farms or go on an organized “Oyster Tour” of several of them. 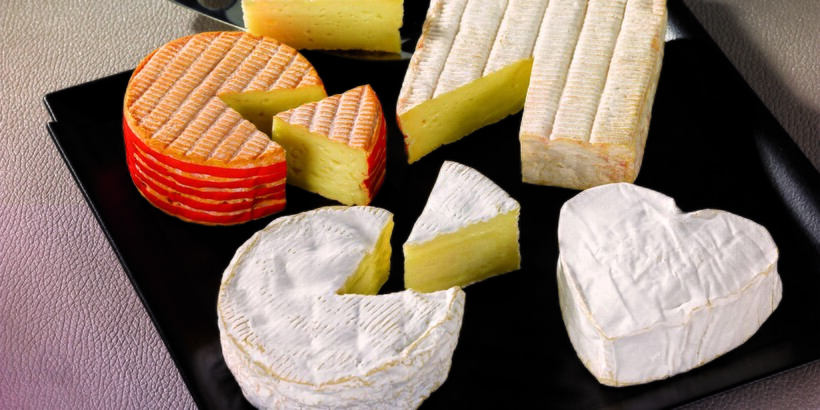 Normandy is famous for its soft cheeses with a washed crust. Photo: authenticnormandy.fr

Normandy cheeses are the most famous in France

Normandy ranks first in France for milk production – cheeses are produced on more than 600 local farms. The region is best known for its soft moldy cheeses with a buttery texture – Brilla-Savarin, Coutance, Saint-André, etc. Four Norman cheeses have AOP (appellation protected by origin) status, which means they can only be produced in the region. The most famous Norman cheeses:

The best apples in France: the symbol of Normandy

Normandy’s apple orchards have been around since the 8th century, and the number of apple varieties grown here exceeds 800. In the region one must try the breast of duck in apple sauce, Norman apple tart or baked in dough apples – bourdelot. The province is also famous for its apple-based alcoholic beverages, especially its “signature” Calvados.

Calvados, or apple brandy, has been produced in Normandy since at least the 16th century, but its finest hour came at the end of the 19th century when an epidemic of phylloxera destroyed vineyards and caused great damage to wine-making. You can buy Calvados in the province of the same name and Normandy everywhere – from boutiques with the best representatives of this alcoholic drink to small home wineries on farms. But Calvados AOC from Pays d’Auge is most famous for its distillation in a traditional distiller.

Although Normandy lacks the Provencal lavender fields and gentle climate of the Côte d’Azur, the Parisian glitz and Renaissance splendor of the Loire, the region has its own charm, which is impossible to remain indifferent. The third largest province in France deserves more than one visit – it falls in love slowly, but forever.

We offer once again to admire the beauty of Normandy in the video: