El Hierro is an island in the Atlantic Ocean, which will hardly be found in the famous guidebooks and in the list of the most popular resorts among tourists. Nevertheless, it is a place that deserves our full attention due to its unique beauty of nature and mild climate. 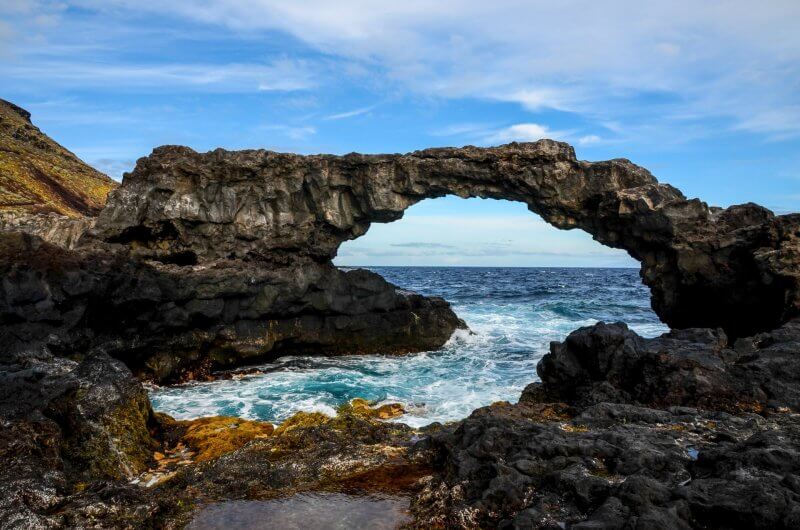 Hierro is the smallest and most little-known island of the Canary Islands. Just over 10,000 people live here and the total area of the island is less than 268.71 km². The largest city of Hierro is Valverde, which is home to the bulk of the population. It is also the cultural and commercial center of the island.

Calling Yerro a popular tourist destination is extremely difficult, so it is comfortable for those who like peace and quiet. Since the island has a volcanic origin, there is a lot of picturesque mountains and cliffs, which will be interesting to hikers.

Interestingly, on the territory of Hierro is the westernmost and the southernmost points of Spain. In ancient times, the island and even considered the edge of the world.

Hierro is an island of volcanic origin and is therefore almost entirely covered by hills and mountains. The center of the island is dominated by a high plateau, the highest point being known as Malpazo (1501 meters). 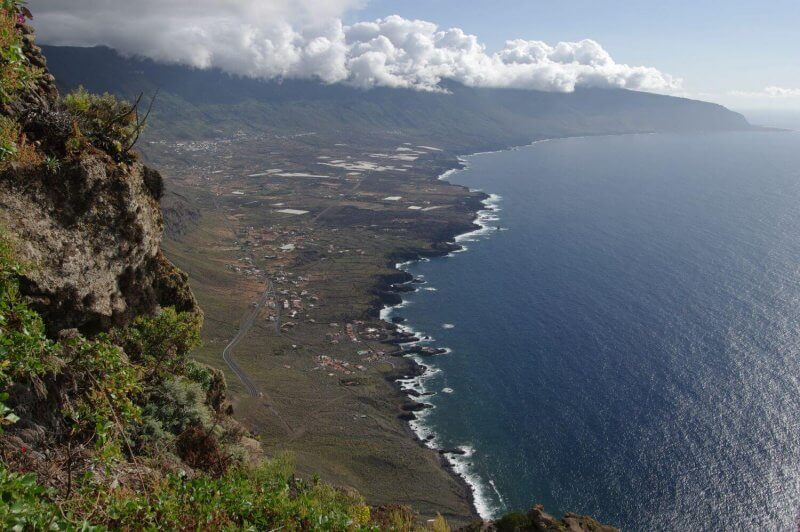 One of the main natural attractions of the island is the bay of El Golfo, known for its futuristic nature and great views. There are a lot of beaches on Hierro – small and large, sandy and pebbly. All of them are almost deserted, so you can stop not where there are places, but where you like.

Because Hierro is near Africa, the climate is subtropical, but thanks to the cold currents, it is rarely hot and stuffy weather. The air temperature rarely falls below 10o C and the water temperature never drops below 20o C.

READ
A travel guide for skyscrapers in Chicago, Illinois.

Hierro is warm in the spring, but it is less suitable for beach vacations. The air temperature ranges from +20 to +24 ° C, the water – +19 ° C. Prices in the spring are at a low season, so the best time of the year to visit is for those who want to observe nature and engage in active recreation. 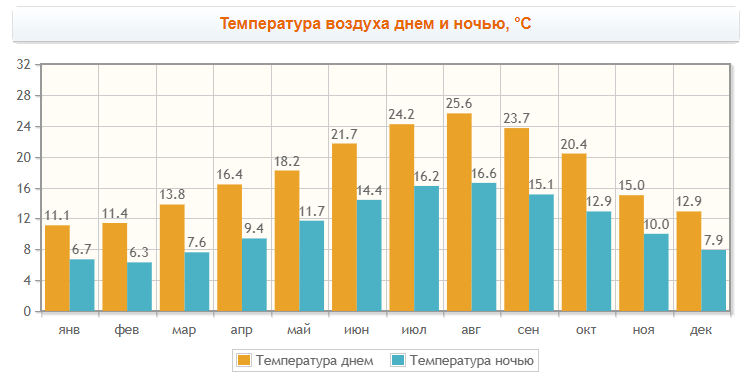 In summer the thermometer does not rise above +28 ° C, and the water temperature – no more than +22 ° C, so vacationing in Hierro at this time of year is the most comfortable.

Early fall is the peak high season, so in September and early October the island is visited by the maximum number of tourists. The air temperature rises to +30 ° C, and the water is even hotter than in summer – up to +25 ° C.

The island has very few attractions, and it is worth coming here for tourists who love nature and want to relax in silence. Nevertheless, there are a couple of interesting places on Hierro to visit in order to get acquainted with the traditions and lifestyle of local people. 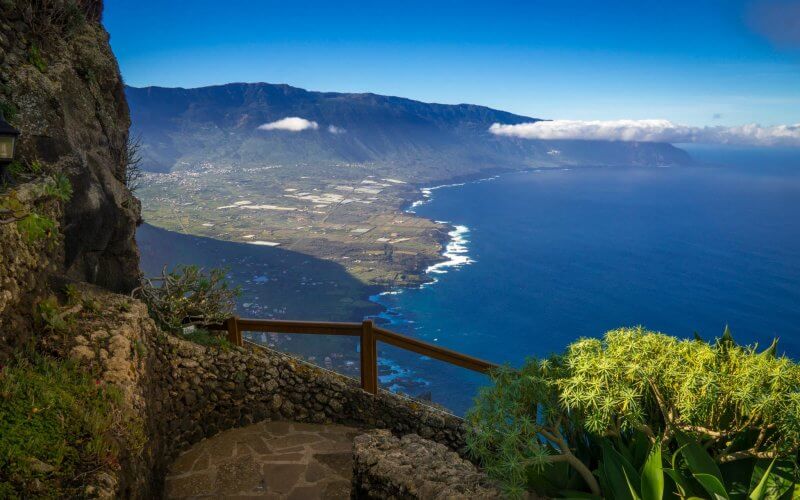 La Pena is the most famous viewpoint on the island, located near the small village of Guarasoc at 650 meters above sea level. This part of Hierro is famous for its dizzying scenery and beautiful views of the ocean.

Since the landmark was man-made (its author is a famous Canarian architect), the construction is completely safe and all the nuances are well thought out. Not far from the observation deck you will find a cozy restaurant with panoramic windows and original flowerbeds, which seem to hang over the abyss.

The Hinam’s observation deck is 1,230 meters high (twice as high as the previous one), so tourists can see not only the picturesque surroundings, but also the clouds under their feet. Locals believe that this is where the earth is connected to the sky, and it is especially good in the summer morning when the sun is just rising. 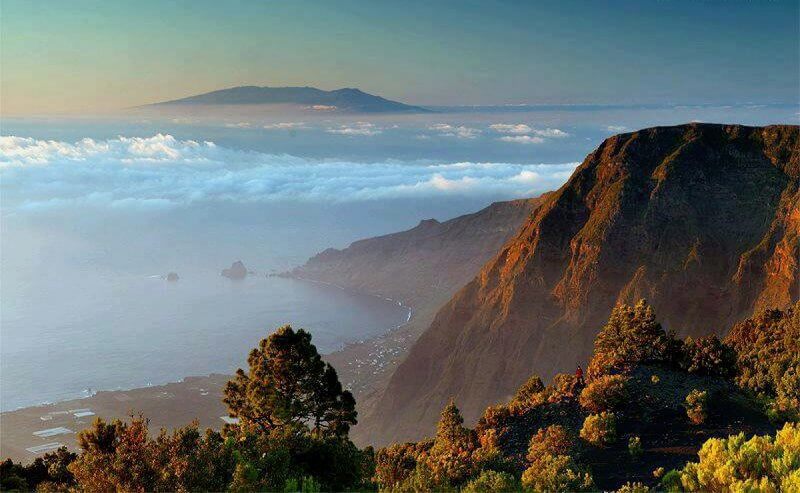 Unlike La Pena, the Hinama Lookout was created entirely by nature and it is important to remember the safety rules of not getting too close to the cliff and not trying to climb the neighboring rocks.

If you want to take your significant other out for a romantic dinner, you won’t find a better place than this site.

The main cultural attraction of the island of Hierro is the ethnographic museum (or ecomuseum), which contains the most interesting exhibits concerning the history of the first settlements and local traditions here.

It is important to note that this is not the standard museum in a tall glass building, but an entire open-air complex consisting of many small stone houses where the locals used to live. In each building you can see exhibits devoted to a specific topic. 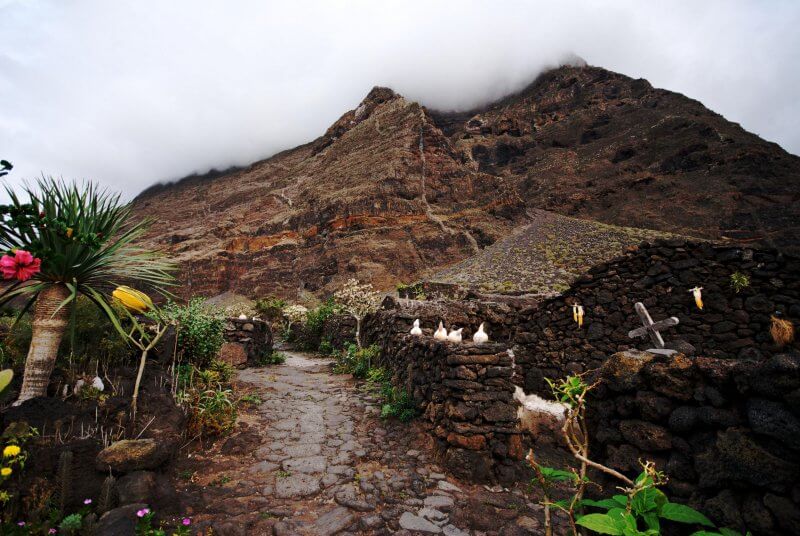 So, in one of the structures tourists will see a reconstructed home of a peasant of the 14th century, which presents tools, some interior details and furniture. In the second house you can see how the house of an ordinary man in the 18th century.

One of the most visited places of interest is the small volcanic cave, which you can visit with a guide.

The lizard nursery Lagartario Gigante de El Hierro, which is home to unique reptiles, is also worth a visit. One of the most valuable species is the lizard, which is more than 1.5 meters long. 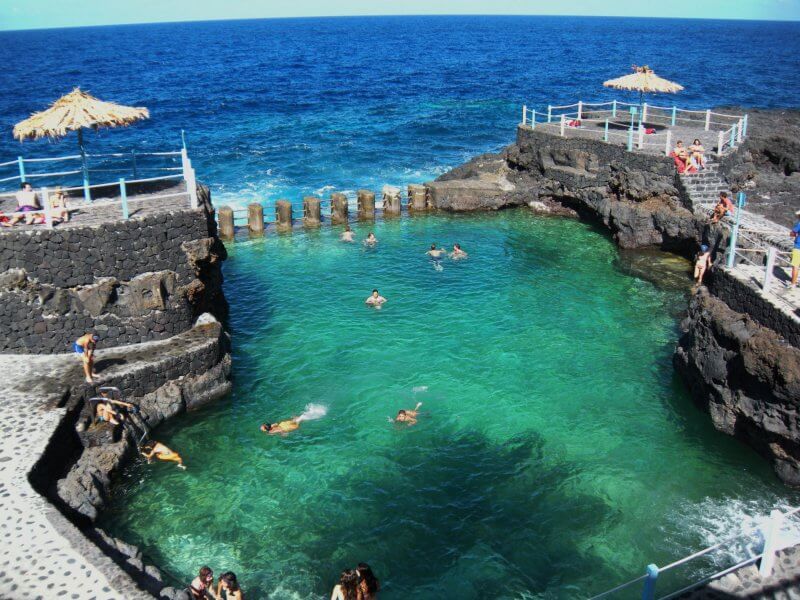 The natural pools of Charco Azul are the most important tourist attraction on the island. The reason for its popularity lies in the beauty of this place and the unique opportunity to swim in the natural pool on the ocean.

Come here in the winter – the water at this time of year is warm, and the pools are filled to the brim. In summer it may be too hot. Always pay attention to the weather – if it is cloudy and windy, it is better to postpone the trip.

The attraction is popular, so it’s best to come here either in the morning or in the afternoon, by which time most tourists disperse.

Takoron is a cozy stone beach in the southern part of the island. There are no places for sun loungers and beach umbrellas here – the stairs to get into the water can only be accessed by a narrow stone path, along which there are a few benches and benches. But there aren’t too many tourists, so everyone can make themselves comfortable. 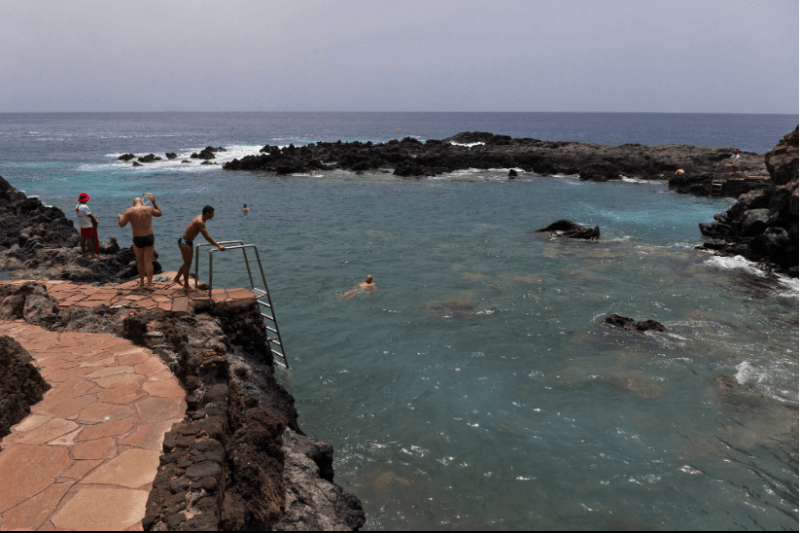 Entrance to the ocean is stone, so it is better to take slippers. The water is very clean, there is almost no algae. At high tide, near the beach there are small lagoons (locals call them Jacuzzi), in which a very comfortable temperature.

As for infrastructure, there is a parking lot near the beach, and on the beach there are benches and a few tables for holidaymakers. There are also small shops in which prices are quite affordable.

If you don’t yet know what to do on Hierro, here are some interesting tips from travelers: 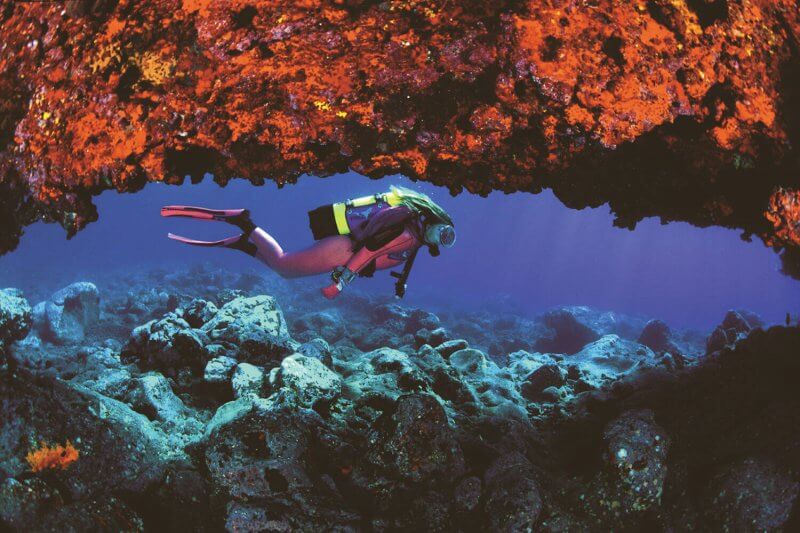 Hierro is one of the Canary Islands, the closest one, La Gomera, is about 110km away. Tenerife and Hierro are separated by 130 km. The distance to Africa (the town of Boujdour in Western Sahara) is just under 260 km.

On the territory of Hierro is a small airport, which receives flights from northern Tenerife. Flights take place 3 times a day from 8 am to 5 pm. The flight takes 40 minutes and the cost of the ticket ranges from 36 to 90 euros. There is no point in booking tickets too far in advance – there are free seats on almost all flights. 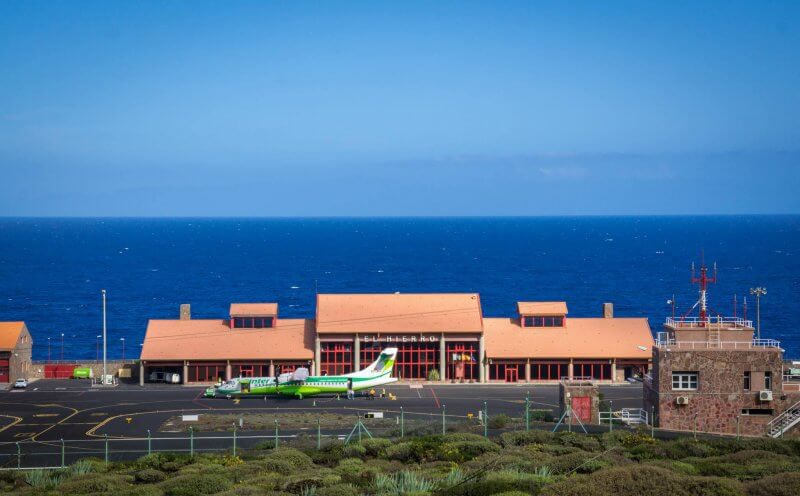 If you can’t take a plane, take the ferry from Los Cristianos to Valverde which leaves daily (except Saturdays). The ship’s departure times change frequently, so you should double-check the schedule before your trip. The ferry ticket costs 49 euros. Travel time is 4.5 hours.

There is only one Naviera Armas ferry company operating on this route and because of this it is necessary to buy tickets for the journey in advance. You can do it on the official website of the ferry company or at the port ticket office: https://secure.navieraarmas.com/inicio.

See here what to see on the main Canary Island of Tenerife. 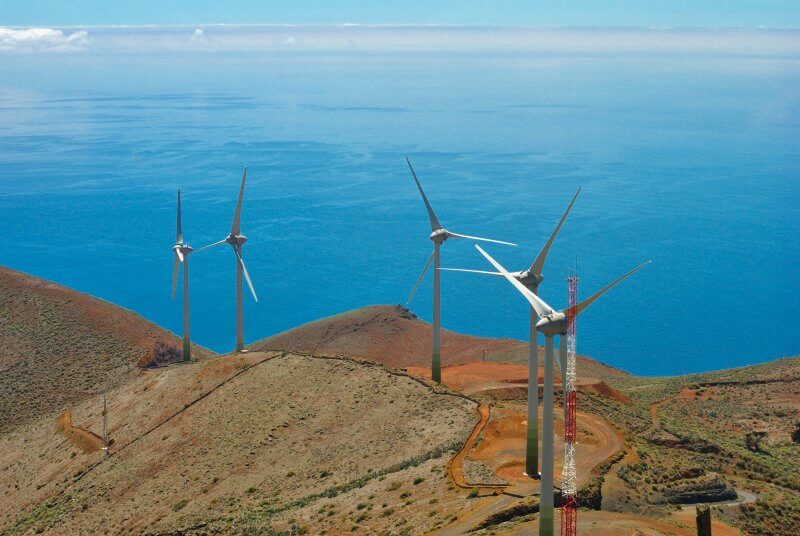 Hierro is an island for lovers of silence and beautiful nature.

Top 10 attractions of the island of Hierro:

Updated: 28 Jan, 2020 Fuerteventura, Spain is the oldest and second most c…

Updated: 27 Feb, 2020 The island of Formentera is the smallest and most picturesque of…