In the heart of the Murcia plateau is the town of Alberobello. Its quaint old historic center was inscribed on the UNESCO World Heritage List in 1996: it consists entirely of “trulli” – typical houses of southern and central Puglia. These structures are cylindrical in shape and topped with a cone, they are built entirely of stone, which is covered with lime on top. Often the roof is decorated with patterns and turrets of different shapes, as well as depictions of zodiacal or religious symbols. You can stay in one of these old and carefully restored buildings, which are furnished according to tradition and, of course, equipped with all modern conveniences.

2. Admire the Baroque monuments in Lecce

Lecce is also called “Baroque Florence”, a style which is clearly visible in all monumental buildings of the city. In the period of Counter-Reformation the art acquired new forms, and as a result, in Lecce, as in the rest of Salento, the architecture acquired new traits, which had to astonish the imagination. The Baroque period is characterized by an extreme richness and abundance in decoration, due to the influence of “plateresco” Spanish style, characterized by the imitation of “plata” (works in silver) and the use of local “Lecce stone” (also called “poor marble”). It refers to limestone rock and has a soft and pliable structure that is easy to work, hardens quickly and acquires an amber color over time. There are many Baroque buildings in Lecce, the most famous are: The Basilica of Santa Croce, a true symbol of this style, its facade looks like an “embroidered altar”; the Government Palace and the impressive Cathedral Square, considered the most beautiful in Italy, with the facades of the cathedral and the seminary overlooking it.

3. Have fun at the “Noche di Taranta” festival

“Taranta Night” is the biggest festival in Italy, it is one of the most important folk music events in Europe. It is dedicated to the revival and preservation of the traditions of folk dance – “pizzica”, the traditional music of Salento and its fusion with other musical languages: from world music to rock, from jazz to symphonic music. The event takes place in Salento, in the various municipalities of the province of Lecce and Salentine Greece. The culmination comes in August, in the town of Melpignano, the final concert is held, which attracts an audience of about one hundred and fifty thousand people. In addition, there are also a large number of concerts in which famous bands and artists take part. Each year, the final concert of the festival is entrusted to a “maestro” who must reinterpret the traditional music of Salento, masterfully combining it with the rhythms of other musical traditions.

Negroamaro and Primitivo are two of the most popular vines in Puglia. Both vines grow in Salento. Negroamaro is of Greek origin and, as its name implies, it produces a dark red wine with a bitter taste and fruity notes when properly produced. Primitivo is an early varietal that makes a red wine that is drier than Negroamaro. Primitivo makes dark wines (the best known of which is DOC Primitivo di Manduria, which is ideal for traditional Mediterranean dishes) with low transparency and good structure, rich color and intense aroma. These two wines are very different from each other, but in them you can hear the typical notes of the Puglia countryside. They are also united by the warm sun, which gives the grapes a rather high sugar content, thanks to which these wines have an alcohol content of over 14% and their aroma and taste reminds of candied berries. This is especially noticeable during particularly hot seasons. 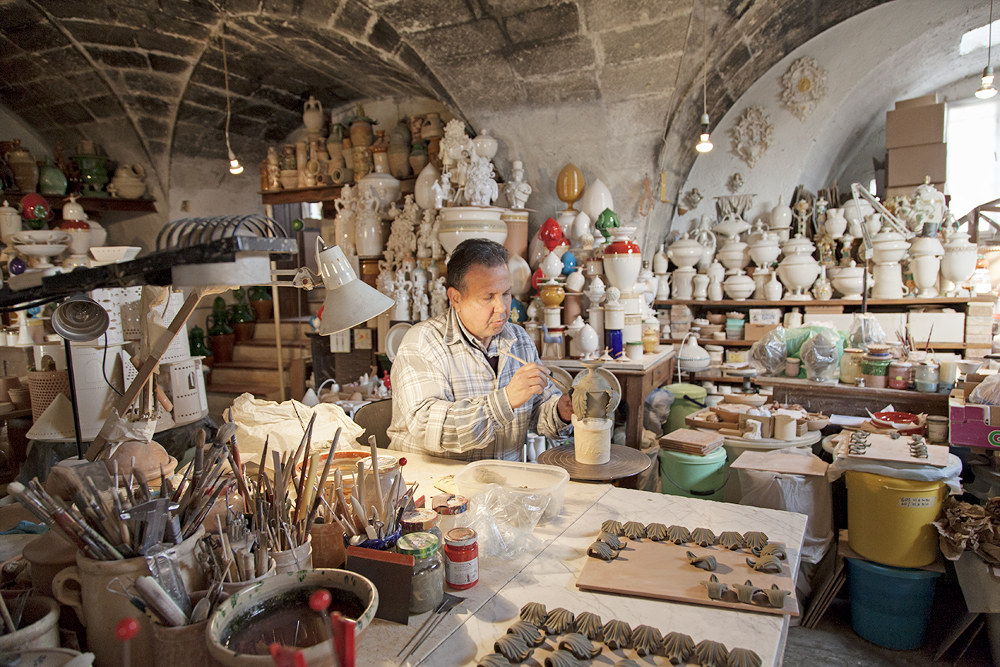 The city of Grottaglia, also called the “city of ceramics,” is the main center where the clay art lives in a unique place – along the ravine of San Giorgio there is a whole area of potters. Here it is worth walking through the stores carved in the rock, there are more than fifty of them, some still have ancient kilns: you can see the different stages of clay processing, as well as buy traditional products. Try to buy a “kapazone” (from the dialect “kapase” – capacious), a large-sized vessel for wine or oil, or a “lu srulu”, a kind of ceramic jug in which the locals poured wine and water. There are two main traditional products: the “bianchi di Grottaglie,” pure and simple in form, devoid of any decoration, covered with white enamel, and rustic pottery painted with bright colors, the most characteristic being yellow.

READ
Innsbruck - the pearl of the Austrian Alps

6. Walk through Ostuni, the “white town”

Ostuni is known as the “white town” because of the custom that later became its hallmark: houses were painted with lime up to the roofs. This tradition spread in the Middle Ages during the Norman domination. In the medieval city, in fact, streets and public spaces were very narrow, and lime, derived from the geological rock of the earth, visually added more light, both to the city and to the inner rooms. Discover the charming old city, also called “Terra,” composed of many ancient white buildings built on top of each other. The center, protected by walls and Aragonese towers, is elliptical in shape, which has formed around Cathedral Street. It climbs a hill, while it is crossed by alleyways, staircases and intricate passageways. It is worth a visit to the Church of the Holy Spirit and admire its portal, created in 1450, it has been recognized as a national monument.

7. Visit the Basilica of St. Nicholas in Bari 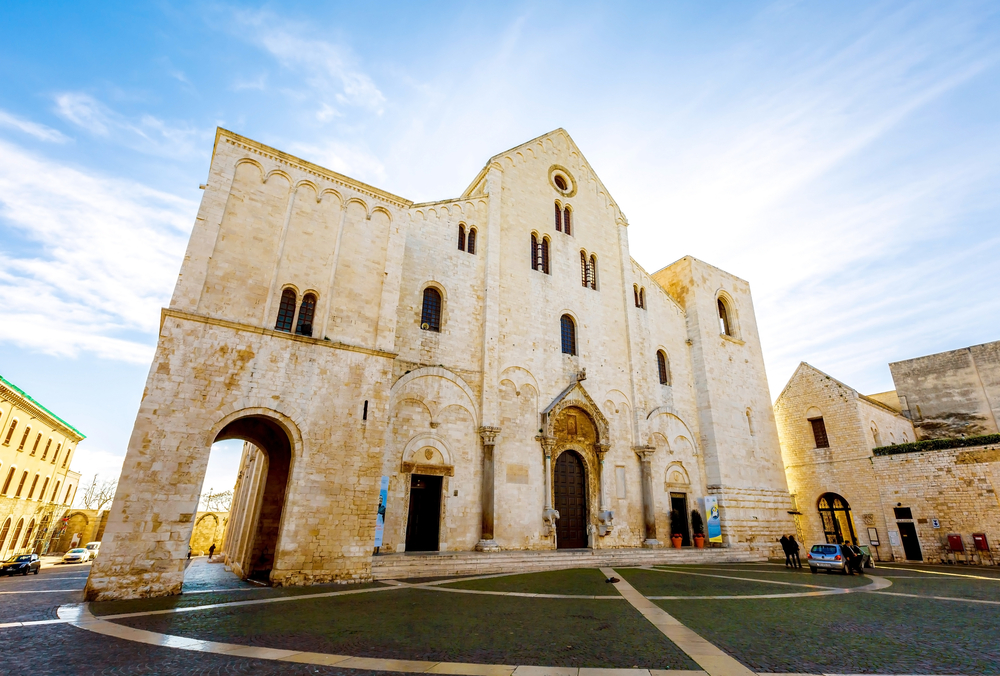 Of all the pilgrimage sites in Puglia, the most important is the Basilica of Saint Nicholas, founded at the end of the 11th century to house the relics of Saint Nicholas of Myra, of Lycia, who is revered by both the Catholic Church and the Orthodox Church. The basilica has always received a steady stream of pilgrims from all over the world, especially from Eastern Europe. There is also a Russian Orthodox chapel in the crypt of the basilica. This is a unique phenomenon. Given the large number of Orthodox pilgrims who come to Bari to visit the tomb of St. Nicholas, in 1967 the eastern chapel was ceremoniously built in the apse. A staircase leads down into the crypt, where the saint’s tomb and chapel are located. It is also worth admiring valuable works of art: the pulpit of Bishop Elia, medieval capitals, the oldest baldachin in the region, a silver altar with a bust of the saint and gold carvings from the XVII century.

8. Getting to the Tremiti Islands

The Tremiti Islands are an archipelago that includes the island of San Domenio, the island of St. Nicholas, the island of Capraia and two other cliffs, Cretaccio and Vecchia. The archipelago has been awarded the Blue Flag several times because of the exceptional purity of its water. Spend a day in the sun on the beautiful beaches of Cala Arena (the only sandy beach in the archipelago), Cala English and Cala Matano on the island of San Domenio. For diving, Punta del Diavolo and Swallow’s Cave are suitable. The transparent surface of the sea turns light green near the shore and turns dark blue in the depths, closer to San Nicolo. Here you can also hire a boat to admire the bizarre shape of the Elephant Rock or the blocks of “Stogi” that have been created by the waves of the sea or to reach the caves of Domora, the promenades and the uninhabited island of Capraia, whose coastline consists of stone arches called “arquitelli”. This is one of the most amazing places for diving in the Mediterranean Sea.

9. Descend into the Castellana Cave

One of the most impressive adventures is the walk to the picturesque Castellana Caves, an imposing complex of mountains formed by water and streams that have formed the karst rock of the mountains over thousands of years. The complex begins at Grave, a huge chasm into which light enters through a small opening, from which you can see a clear sky framed by a wreath of oak trees. In addition to Grave, stalactites, stalagmites, and precious crystals are worth admiring here, as well as getting to the white alabaster in the last cave, the White Grotto.

10. Enjoy the flavor of burrata cheese

Burrata cheese from Puglia is a fresh cheese that resembles mozzarella and is pear or spherical in shape, whitish in color, and has a soft and juicy “stracciatella” filling inside. In this case, stracciatella is one way to process fresh milk (not ice cream!). This filling is assembled into a cheese “sack” that is traditionally wrapped in a leaf. It is believed that the best burrata is made in the Murge area, in the province of Bari. It is worth a visit to Gioia del Colle or to Andria, the birthplace of this cheese, one of the most delicious dishes of Puglia. The exquisite burrata pairs perfectly with traditional wines of Puglia like Aleatico Puglia, Martina Franca and Primitivo di Manduria. Among the traditional dishes we should also mention the ravioli with burrata and porcini mushrooms, an ideal dish in winter time.