The most picturesque villages in mainland Greece in the Mount Pylion

The mesmerizing beauty of the landscapes on the mainland makes it difficult to choose among the most atypical, the most attractive and the least known.

And in fact many of them are mentioned by locals as the most picturesque mountain villages of the country, but unfortunately only single travelers know about this beauty.

What a pity! Let’s get acquainted with at least some of them.

Pilion at its best 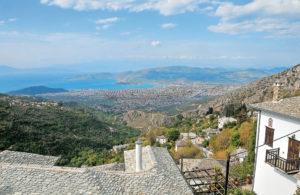 With all my heart I would say that it’s not easy to answer all the questions of travelers going to visit the Pilion.

The most frequently asked questions are: What is the most beautiful village of Pilion? Where to try the local cuisine? At which hotel is the best breakfast? Where can I dance till dawn in a bar? Where can you make the most romantic walks?

Immediately you want to ask, “What would you like to see when going to the mountain villages?” 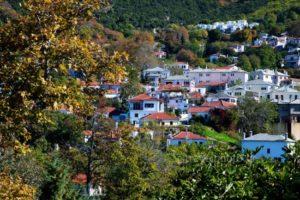 If you are interested in imposing mansions and walking through quiet, idyllic provincial streets, then you should definitely go to a place called Agios Lavrentios (Άγιος Λαυρέντιος) .

If you want romance, you should go to Tsakarada (η Τσαγγκαράδα) .

If you like a cosmopolitan atmosphere and appreciate fine cuisine, go to Portaria (η Πορταριά) .

Want to explore the local sights, then go to Milies (οι Μηλιές) .

Want to dance until morning to see the sunrise through the colorful windows of a cozy bar, then this is Zagora (η Ζαγορά) .

So fill your car’s tank to the brim and hit the road for your own discoveries and unforgettable experiences.

All we have to do is to guide you, so that you know which road map to choose… 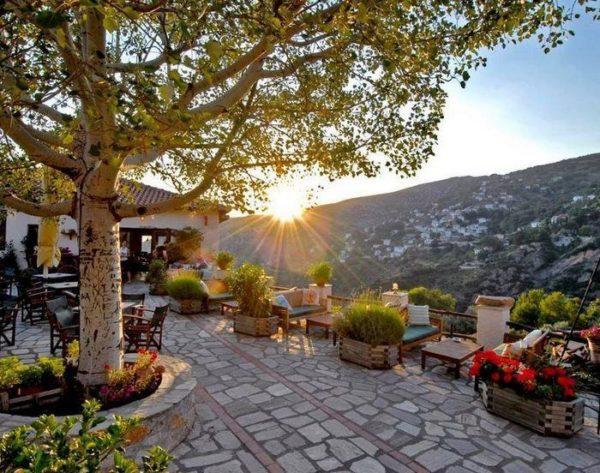 One of the most beautiful but hardly noticed and therefore rarely visited villages in the mountains of Pilion.

READ
14 most recommended destinations in Latvia

It is immersed in the greenery of wild cherries and chestnuts and is a charming place, chosen by the inhabitants to build “family nests”, local townhouses made in the authentic architectural style of Pilioretica.

Here the streets are paved with stone and there are many charming buildings with fountains. This village is famous for its early summer festivals dedicated to cherries and local cherry moonshine.

The village is quite easy to find. It is located in the nome of Magnesia, in the dimer of Zagoras-Muresi, 47km east of Volos.

In this small village there are cozy inns built literally every three meters. Do you know why? Here, regardless of the season, every weekend couples in love come to spend their holidays in a beautiful romantic idyll.

The village is built on a hillside with a magnificent view of the sea, the foot of which is full of wonderful coves, beaches and bays.

All the surroundings resemble images of fairy tale movies: huge ancient plane trees and chestnuts in three girths, mansions that look like medieval palaces, paths paved with stone quarried in local quarries, which, incidentally, also cover the roofs of houses. And the traveler at times it might seem that just about out of the thicket of the forest will pop up a little elf, and in the hollow of a thousand-year sycamore tree hides a cozy bedroom of a magic fairy of our childhood dreams. 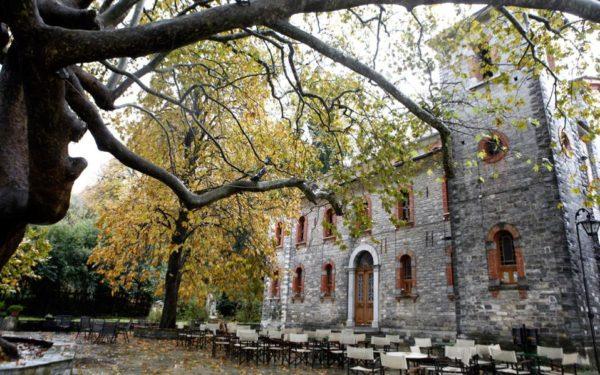 The arch stone bridge of Tsagarada is located at the beginning of the village, where the Milopotamos Gorge begins. It is the oldest and most famous bridge of Pilion. It is very easy to find. On the central road leading to the village there is a sign of Palio Gefira “The Old Bridge”, immediately after which a descent down the slope will lead you to the gorge of Milopotamos. Here, among the chestnuts, there are benches to relax and admire the old bridge, listen to the rustling of the leaves and the murmuring of the water from the canyon. You can have a cup of aromatic coffee at the cafeteria near the bridge.

Walking around the village, be sure to visit the Church of Saint Paraskeva. It is a cathedral built in 1909, where all the festive and Sunday services are held. It is located on the main square of the village, and nearby grows another attraction – a huge sycamore tree, which is nearly 1200 years old. Its trunk is 15 meters thick and its branches are so long that in the summertime the area around the tree is almost completely shaded by it.

Another interesting walk is to visit the rock with the cave, near the beach of Fakistras, where in 1668, during the Ottoman occupation, an ascetic monk tried to teach the local children the Greek language and the Orthodox canons.

In summertime, it is worth visiting the local beaches, famous for their crystal clarity and the extraordinary emerald green color of the sea water.

Milopotamos is one of the most famous beaches. The wildlife that surrounds it and the coastal rocks make it hard to reach. The beach itself is divided into two parts, separated by a towering rock, which are connected with each other through a hole cut by the sea.

Fakistras is a deserted beach, which is a beautiful bay without sea winds, surrounded on all sides by pristine rocks. The beach has no umbrellas or sun loungers, but is often visited by lovers of pristine nature. 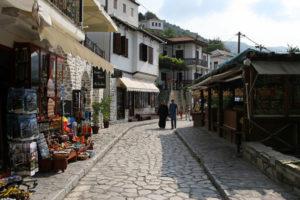 Makrinitis is just 17km from Volos and 12km from the ski resort of Pilion. Thanks to its location the village has become one of the most popular winter and summer tourist destinations, which attracts visitors who come here to spend their time relaxing in the unique natural surroundings and practicing their favorite sport for recreation: hiking along the mountain and forest routes, mountain biking, horseback riding and downhill skiing.

READ
Journey through the places of Sherlock Holmes

All sorts of folklore festivals are often held here, showcasing the skills and abilities of local dancers, singers, and artisans.

The main attraction of Makrinitsa is the central square, often called the “balcony” of Pilion – the name given to it because of the stunning views of the city of Volos and the Bay of Pagistiko .

There’s also the magnificent Temple of St. John the Baptist, next to which is arranged a marble fountain decorated with bronze lion heads. According to legend, “living” water flows from the spring that feeds it. 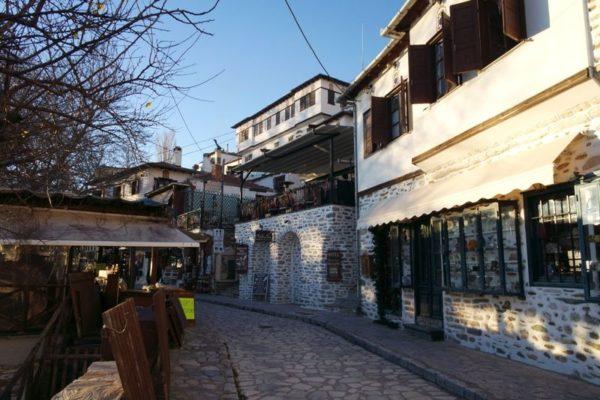 It is also worth having a cup of genuine Greek coffee in the coffee house “Theophilos” and admiring the mural painted in 1910 by the famous artist Theophilus Hatzimichael, a native of the village, titled “The Battle of the Cold Fountain”.

Another one of the most beautiful and popular among Greek travelers mountain villages, which are revered as “open air museums” What is it that attracts them? First of all the beauty of the local unique architecture (pylori).

Beautifully preserved old mansions, decorated with paintings. Admiring them you can wander for hours, not being afraid to get lost in a stone maze of streets, as they all lead to the central square of the town.

Almost all of the mansions are small family hotels, and the charges for lodging here is not very high. The local coffee houses serve particularly delicious coffee made on the sand and if you are lucky enough to try the local moonshine tsipouro and the meze snack, you will definitely come back here again. 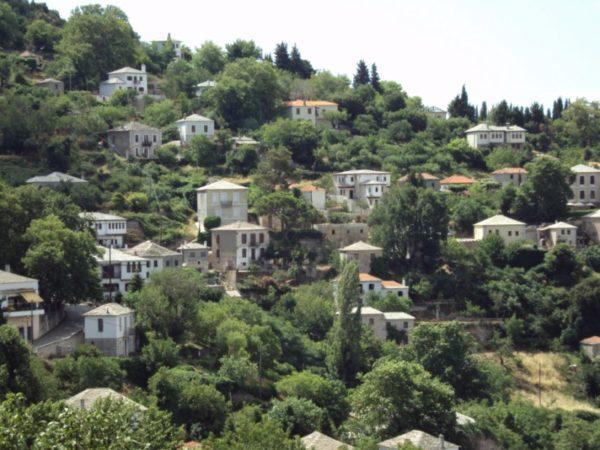 One of the old settlements of western Pilion, built in the 15th century at an altitude of 620 meters above sea level. The legend says that in those ancient times the shepherds were looking for good pastures. Under one of the bushes in the place where the village is situated now, they found an ancient icon of St. George. So it was decided to erect a church in honor of the Saint, around which the village of the same name was built later on. There is also a church dedicated to St. Athanasios that was built in 1795 by the local craftsman, Zipanetis. This temple belongs to the best examples of folk art XVIII century and is protected by the state. In addition, since the XIII century in the village there is a nunnery. An amazing fact: in 1821, during the revolution, the village was burnt to ashes, but all the temples have retained their original appearance.

One of the tourist attractions is the museum of Nikolaos Pavlopoulos, born and raised in Nilias, or “Nicolas the Sculptor”. When he became famous, he founded this museum and donated many of his works to it. Apart from them, works by famous Greek artists, Yiannis Poulakis and Chrysoula Zogia, who also come from the village, are on display here.

In 1995 on a hill near the village was built the amphitheater of Aloni, where every year there are folklore festivals, symphonic concerts and theater performances that attract many people.

We have only been able to tell you about a few villages in Pilion. But we believe that if you are going on a trip to these beautiful places, you will make for yourself many interesting discoveries.