If you’re thinking about where to go next, take a closer look at Europe, and more specifically, at the fairytale palaces and residences, many of which are still in operation today. Fans of romantic (or even mystical) adventures will surely appreciate our selection of ancient European castles that really deserve attention. For example, a visit to one of the residences once inspired Pyotr Tchaikovsky in his work “Swan Lake”, and other palaces, in fact, served as the scenes for the shooting of cult films.

Château de Chambord is probably one of the most recognizable castles in France, which is rightfully considered a Renaissance architectural masterpiece. It was built on the orders of Francis I, who dreamed of spending more time near his beloved lady, the Countess of Turi, who lived nearby. According to numerous historical studies, Leonardo da Vinci himself took part in the design of this masterpiece, so the building, which has 426 rooms, 77 staircases, 282 fireplaces and 800 decorated capitals, is really worth seeing. The castle, a UNESCO World Heritage Site, can be admired at any time of year, but in autumn and winter it looks particularly impressive. About 13 years ago, the castle, on the second floor of which is now a branch of the Museum of Hunting and Nature, acquired the status of a state public and commercial enterprise.

Over the years the residence of the Spanish kings, Alcázar, situated on a rock in the historic part of Segovia, has been not only a royal castle but also a fortress, a prison, and even an artillery academy. In 1953 the Alcázar, considered during the Middle Ages the favorite residence of the kings of Castile, became a museum with furniture, interiors, weapons collection and portraits of the Spanish kings. It is now one of the most visited places in Spain and every tourist considers it their duty to visit all 11 rooms in the castle and climb the highest tower, Tower of Juan II.

This castle complex was built about two centuries from 1230 to 1492, during the reign of the Narcid dynasty. The residence essentially consists of two picturesque courtyards connected by a passage and surrounded by palaces, churches, gardens and residential buildings. You can wander around the complex, considered a true wonder of the world, and admire the decorative elements, paintings, architectural delights and abundance of Muslim motifs in harmony with the overall atmosphere of the grandiose structure.

One of the largest castles in Belgium (Belgian Château de Walzin), built by the Bishop of Liège, Dietwin (Theodouin) of Bavaria for defense purposes, is located directly on the cliff, in the village of the same name. It is noteworthy that Walzen acquired its romantic appearance after restoration and renovation (the first by the architect Emile Jeanlet in 1881 and the second, in which Olivier Flanno took part, in 1930). The castle, which is still owned by the Count and Countess de Limburg-Stirum, direct descendants of Henry IV Duke of Limburg and Guillaume de la Marche, is closed to visitors, but no one prohibits admiring it from afar.

Schönbrunn Palace, formerly the palace of the Habsburg dynasty and home to 1,441 Rococo rooms, is a UNESCO World Heritage Site. Empress Maria Theresia, Napoleon, Mozart, Queen Sissi (wife of Emperor Franz Joseph) stayed here, and since 1918, after the fall of the monarchy, the residence became accessible to the general public. Today there is a museum, beautiful gardens, cozy pavilions and a labyrinth through which one can wander for hours.

Schloß Neuschwanstein is located near the town of Fussen in southwestern Bavaria and was the inspiration for the architects who built Disneyland’s Sleeping Beauty Castle in Paris. By the way, historians assure that Peter Tchaikovsky was also fascinated by the romantic views of the castle, and after visiting the residence of King Ludwig II he had the idea of creating the ballet “Swan Lake”. Neuschwanstein was also featured in the 1968 film Chitty Chitty Bang Bang as the castle of the fictional land of Wulgaria, as well as in the 1955 films Ludwig II: The Shine and Fall of the King, 1972’s Ludwig, and 2012’s Ludwig of Bavaria.

The name of Friedrich the Great’s most famous palace (Schloss Sanssouci) translates as “without a care” and absolutely reflects the mood of the Prussian king, who wanted to build something just for the soul and personally took part in decorating the rooms. According to the ruler, this castle was supposed to be a place where a person could be alone with nature and enjoy life in peace. That is why levels of vineyards were laid out in front of the palace, and the residence itself is located in a huge park with flower gardens and numerous fountains, among which you can leisurely stroll and meditate on eternity.

The destiny of this castle would have been less rosy if king Maximilian II, after discovering the ruins of Schwanstein castle, had not bought the area from its aristocratic owners and in 1832 began to build his summer residence on the ruins. The Neo-Gothic style was designed by the architect Domenico Quaglio, and the castle is now rightly considered one of the most unusual and beautiful. After Maximilian’s death his son Ludwig stayed here for a while, but then he decided to build his own castle, surpassing the popular Hohenschwangau – the romantic Neuschwanstein.

All rights reserved. Full or partial copying of the Site materials for commercial purposes is allowed only with written permission of the Site owner. In the case of violations, the responsible persons may be held liable in accordance with the current legislation of the Russian Federation.

10 castles of Europe, which is worth a visit at least once in your life 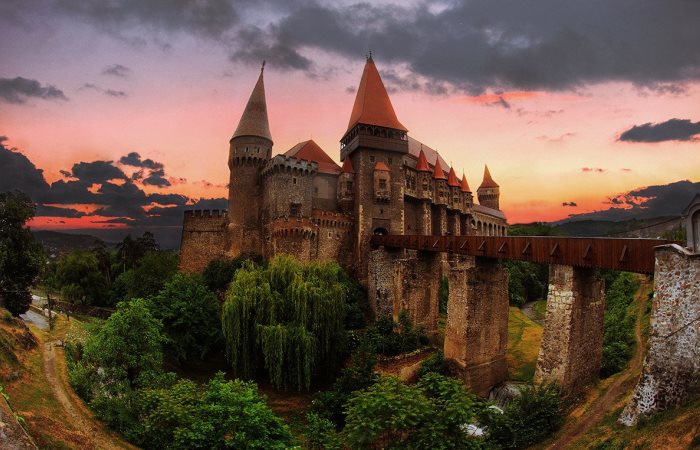 Majestic and gloomy, ancient and not so ancient, former fortifications, prisons and residences – all are castles of Europe. For almost a thousand years Europe’s monarchs, military monastic orders and aristocrats built castles. Many of them survived to this day. Each of them is a true landmark, worthy of a visit.

READ
Hugging the trees: one day in the woods will boost your immune system for a month 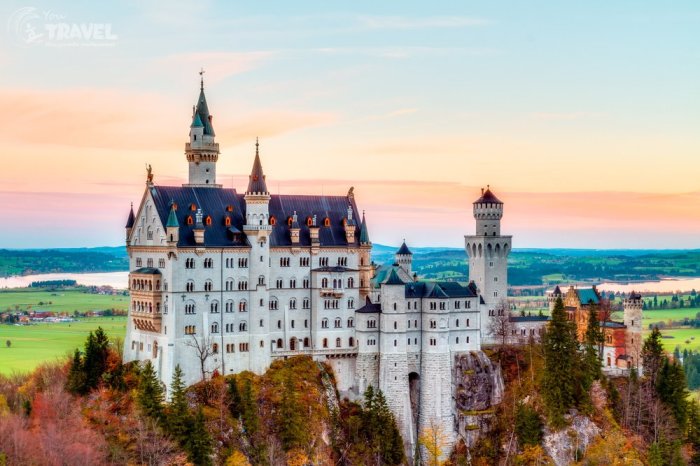 German castle in Bavaria made in Neo-Romanesque style. It was built in 1886. Literally, the name of this place translates as “New Swan Cliff”. Construction was initiated by King Ludwig II, who ordered specially for the construction of Neuschwanstein to lower the local plateau at 8 meters by undermining the soil. During the life of Ludwig castle was not completed. His successor Regent was forced to open Neuschwanstein to the public, pay his lenders and finish the construction. Today the place officially has the status of a museum. 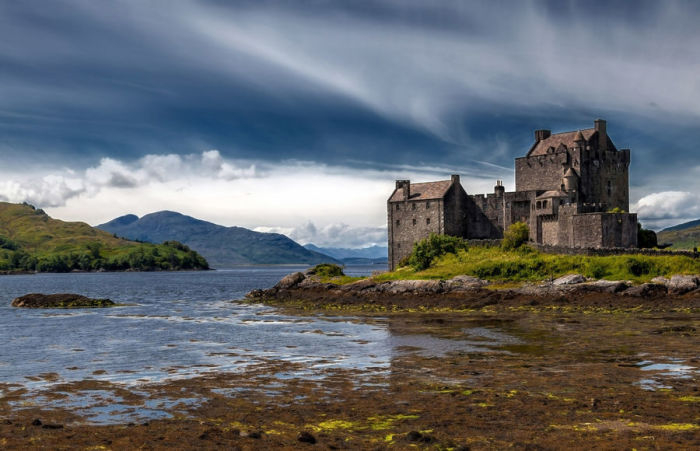 The castle on a rocky island in the Loch Duich Fjord has the most ambivalent reputation in the world. Some people consider it one of the most romantic places in all misty Albion, while others consider it one of the darkest castles in Europe. The castle was often used as a shooting ground. By the way, the Highlander movies were shot here, as well as one of the parts of the Bond movies “And the whole world is not enough. This castle was built back in the 13th century. 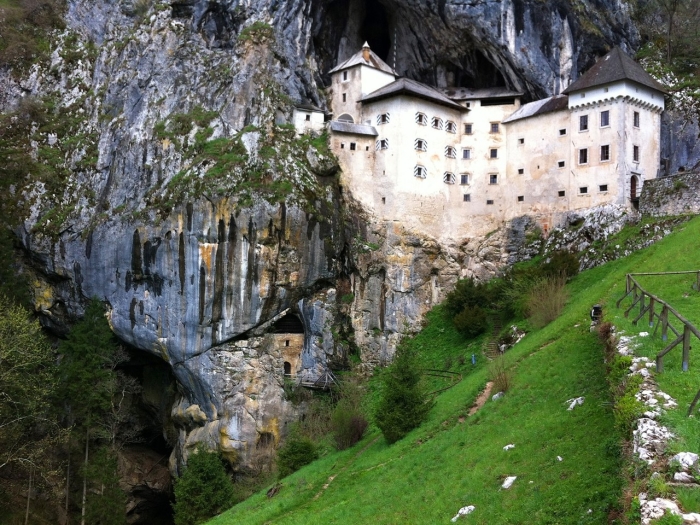 One of the oldest castles of the country. It is located 10 km from the town of Postojna, which today is one of the local tourist centers. The name of the castle speaks for itself, but Novate.ru wants to explain that the word “Jama” in Slovene means “cave”. The graceful incorporation of the building into the rock is its main feature. The castle was built in 1202 and is one of the symbols of independence of the state. The building is made in Gothic style. 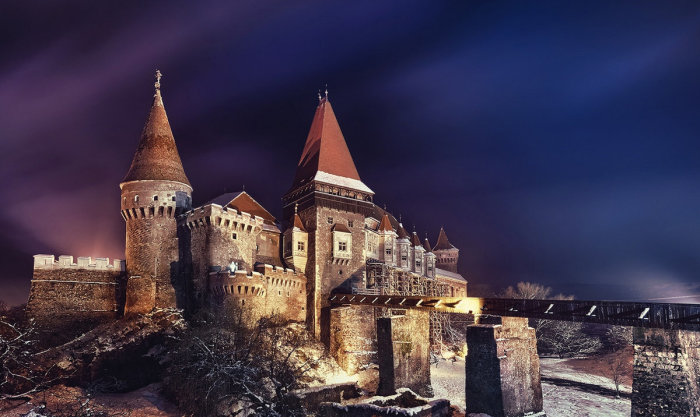 The ancestral home of the House of Hunyadi. The castle is located in southern Transylvania. Built in the mid-15th century and is an example of Neo-Gothic style. The castle is also interesting because Vlad Tepes (Count Dracula) himself spent 7 years there as a prisoner after his overthrow. It is impossible not to mention that Corvinov is one of the brightest and most beautiful castles in all of Europe. Despite a series of fires in the last three centuries, the castle was able to resist and today is a place of pilgrimage of tourists. 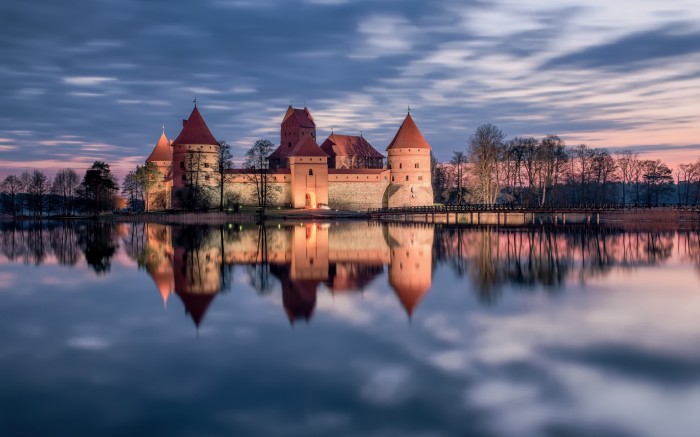 In Lithuania, unfortunately, not so many castles remained. The reason for this is very simple – the numerous wars that have passed through this land. Nevertheless, the Trakai castle has survived. Today it is the largest of the survivors. Once it was a residence of Lithuanian princes. Grand Duke Vitovt was born there. Tarakai castle was built in the 13th century. It was originally built to defend against the Teutonic Order, but rapidly lost its strategic importance after the Battle of Grunwald on July 15, 1410. 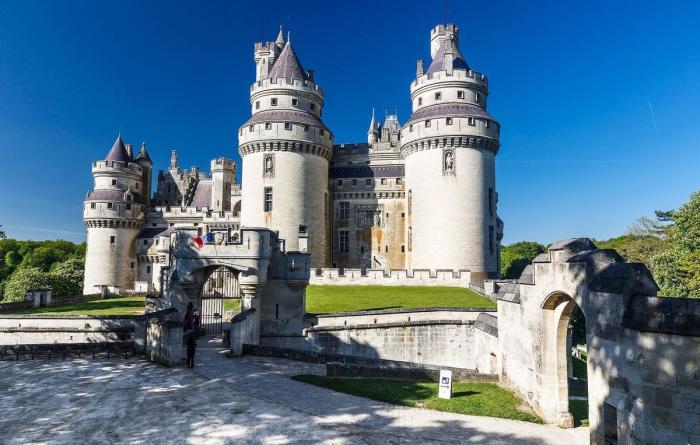 A movie star castle. Even if you have never been to France, you have surely seen Pierrefonds. It would be hard to count the films in which it has served as a backdrop. Films have been made here since 1924. The films “Iron Mask”, “Aliens”, “The Hunchback” and “Merlin” are just a small part of those associated with this place. By the way, the castle originally looked much more modest. It has been rebuilt several times. The biggest “repair” waited for the construction under Emperor Napoleon III, who unexpectedly decided to make this place his residence. 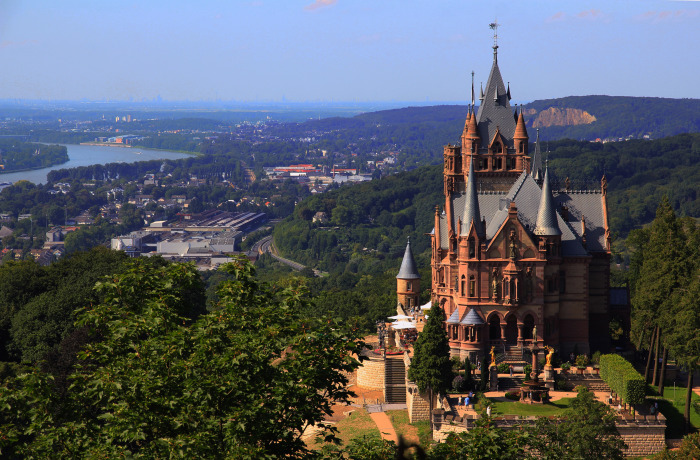 The construction of Castle Drachtenburg was completed in 1884. The building is made in neo-Gothic style. In fact, it is not really a castle, as elements of a villa and even a palace can be traced in Drachenburg. Contemporaries argued that the sophistication of this building even surpasses the lauded Neuschwanstein! By the way, the name of this place is translated as “The Dragon’s Court”. Many German prime ministers chose this place as their residence. 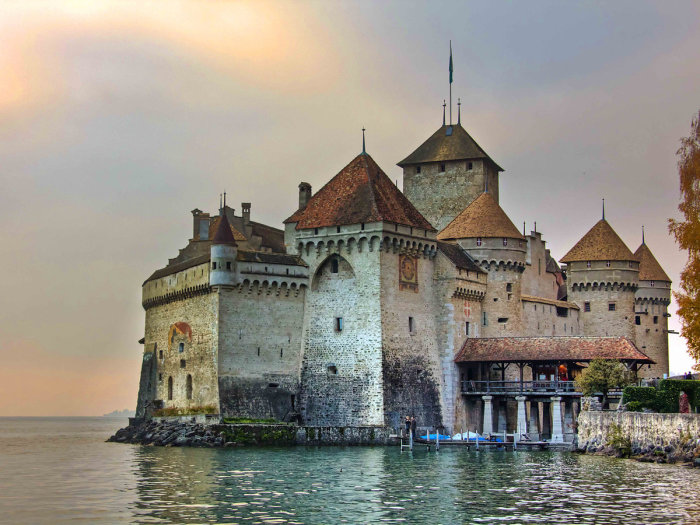 The castle, which appeared in the 9th century on the shores of Lake Geneva. Subsequently it became a whole complex of 25 different structures. For the most part this gloomy place was used for holding prisoners of all sorts. Only at the end of the 19th century the castle began to gradually transform into a museum, although criminals were still kept on the upper floors. Today the only thing that remains of the prison is a macabre story. 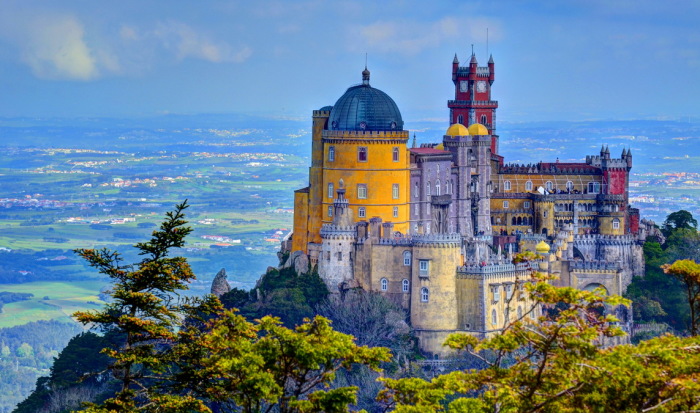 Pena Palace in Sintra. The founder of this quaint castle was Fernando II. The complex was built in 1838. The castle is a representative of romantic architecture. It was used mainly as a residence, including for all kinds of celebrations. 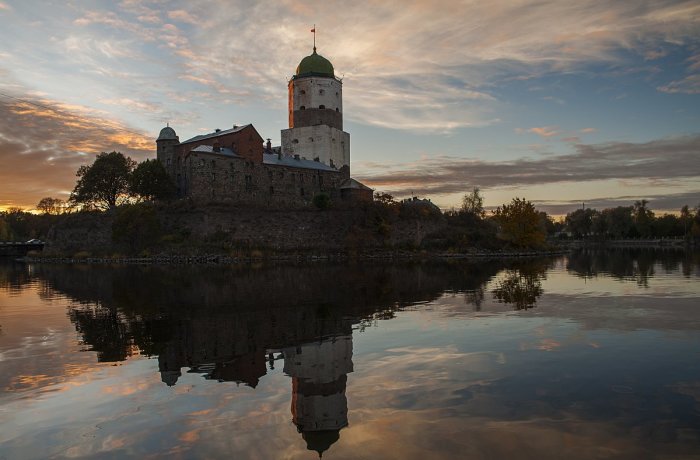 The castle on a small island in the Gulf of Finland. It is the oldest local fortification. Vyborg Castle appeared in the 13th century. It was founded by Swedes, during the Third Crusade to Karelian land. For understandable reasons the castle was rebuilt many times, as it was an important strategic object. At the moment it has the status of cultural heritage of Russia.

Do you want to see more interesting things? How about taking a look at these 10 libraries of the world, the interior of which is able to distract from reading the most interesting books, so it is good.