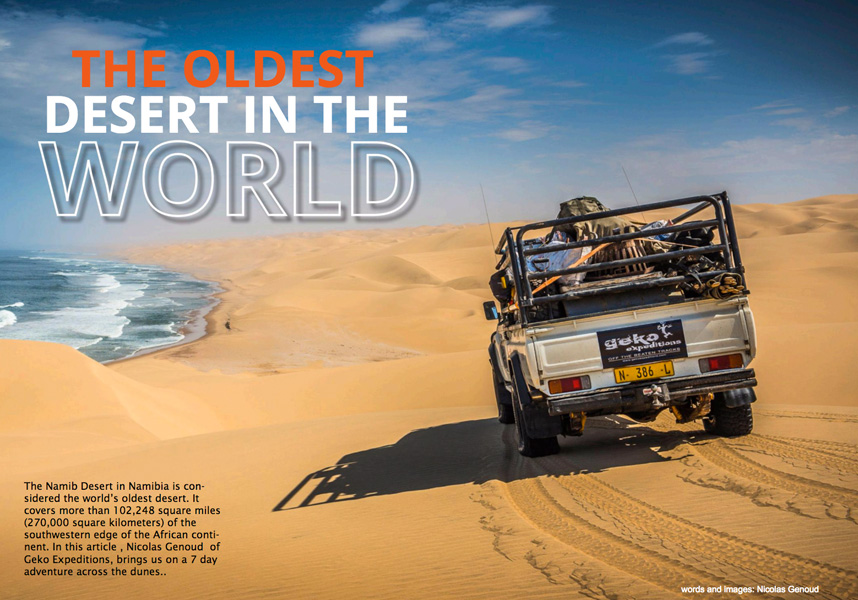 The oldest desert in the world – crossing the Namib Desert.

The Namib Desert in Namibia is considered the oldest desert in the world. It covers more than 102,248 square miles (270,000 square kilometers) of the southwestern edge of the African continent. In this article, Nicolas Genow of Geko Expeditions, brings us on a 7-day dune adventure. 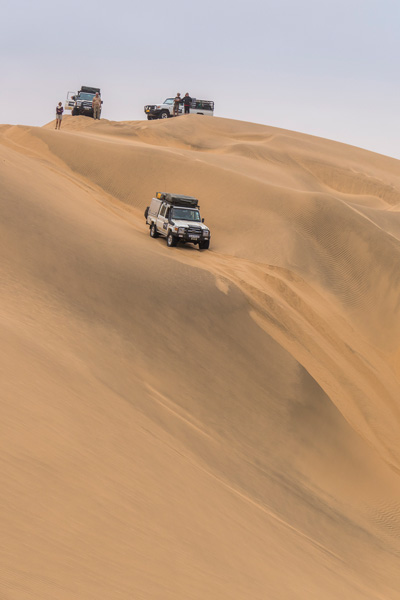 Nicolas and his partner Sandra traveled the world as they were 15 years old. From Costa Rica to Botswana, Russia to Madagascar, no continent escapes their thirst for discovery. In 2003, Nicolas created Geko Expeditions, which organizes and manages adventure trips whose common denominator is discovery off the beaten path. 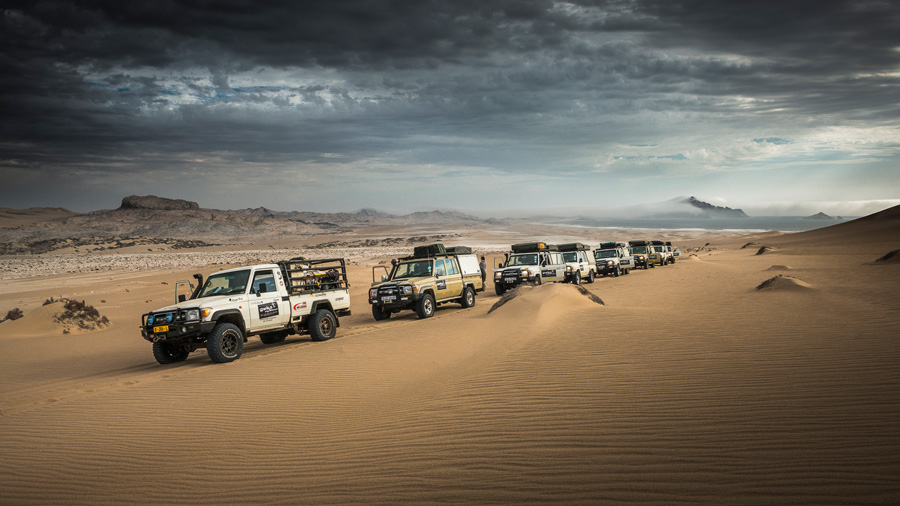 Since then, Geko has organized and guided numerous expeditions to vario us destinations, including more than 30 in the Sahara. Here Nicolas accompanies us on one of his Namib expeditions.

Namib, that magical name has captivated me since childhood. Namib is “where there is nothing.” I often dream about it. It is the oldest desert in the world, contains the highest dunes, and borders the Atlantic Ocean. It is hard to imagine a more hostile place on Earth . Perhaps because man has no place there, it is so fascinating to man. 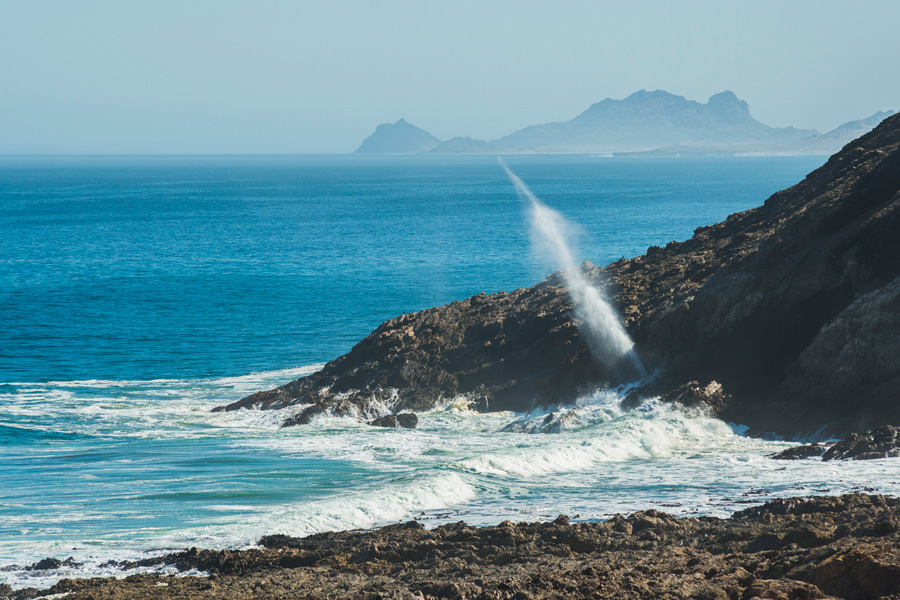 We left Namibia’s capital, Windhoek, five days ago. Walking south along its border, touching but never stepping into it. Today is the big day as we begin our crossing of the Namib Desert, from south to north, from Luderitz to Swakopmund. We will travel for 7 days crossing about 800 km. Crossing the famous and long forbidden “Sperrgebiet”, the “forbidden mining zone”, before crossing the protected area of the Namib-Naukluft Nature Park. Access to the desert is strictly controlled and restricted. Only a few certified guides offer trails in the northern part of the national park. Geko Expeditions, which organizes and guides this expedition, has an exclusive permit to enter the southern zone, the Sperrgebiet. This permit requires the approval of the Ministry of Mines and Energy.

READ
Cavtat: Information on the city and sights 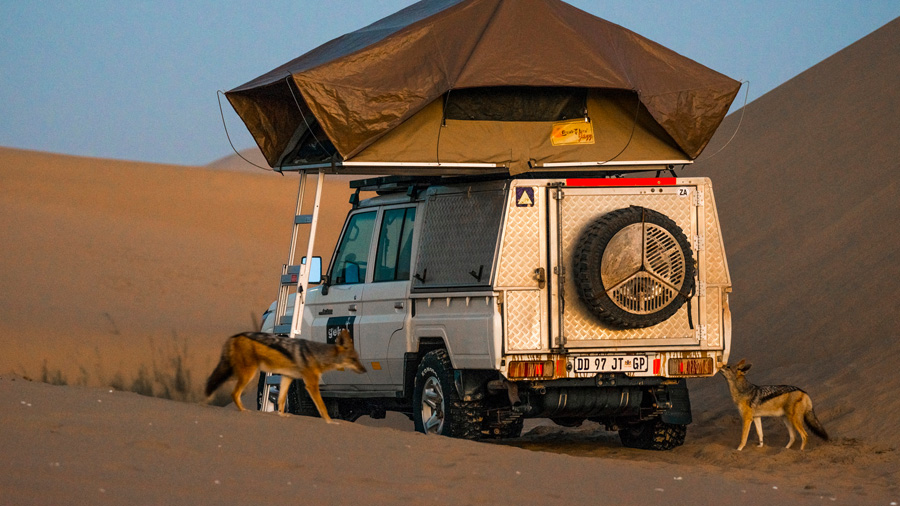 After passing through the final checkpoint, and our documents have been checked (and have been intrigued). We start by deflating the Land Cruiser tires. 0.8, they’ll fit 0.6 on occasion in the toughest spots. 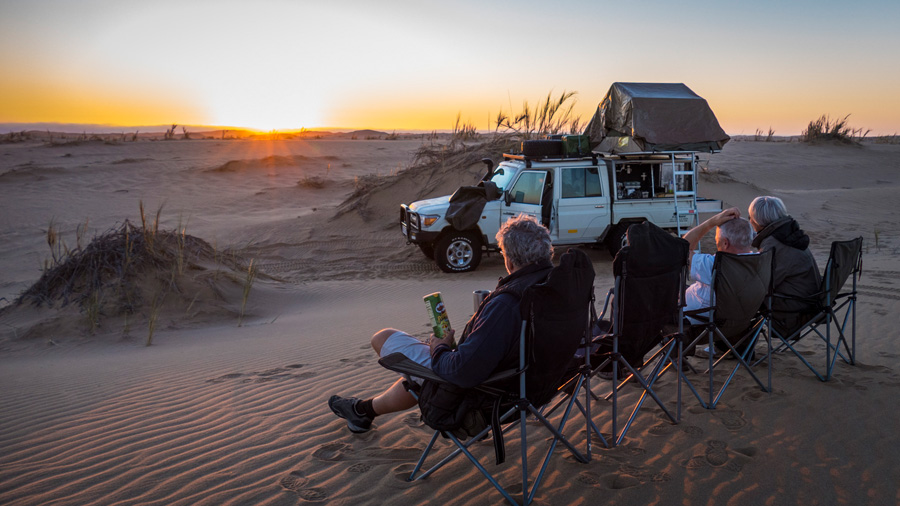 We leave civilization behind and follow in convoy on a track that very quickly gives way to immense virgin sand. The group consists of 8 Land Cruisers linked by VHF radio. Both guides take the lead and the logistics vehicle follows. It is important to drive in the path of the lead vehicle. It is strictly forbidden for vehicles to create their own / multiple tracks. Namibians emphasize the preservation of their desert. During this trip, we do not cross or overtake one vehicle during the 7 days of crossing.

Some basic techniques and principles are used early in the crossing. It is important to understand at what speed to approach the ascent or descent of a dune, how to manage momentum, acceleration selection and change, and the actions to take in the event of an impending accident. There are many important training methods. We conclude this introduction to the desert journey by crossing several of the larger dunes, acclimatizing to what lies ahead. Fortunately, the level of difficulty as well as the size of the dunes is progressive. Its nice to try some “human scale” dunes before we encounter monsters on day three. 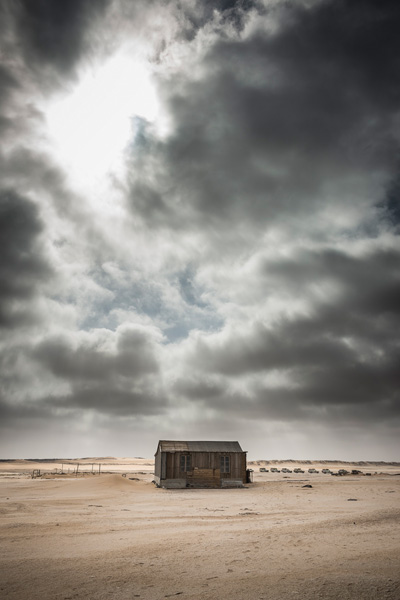 Shipwrecks We move in and out of the coast during the trip. The journey along the coastline is very appealing as the sea is beautiful and there are numerous shipwrecks and interesting flora and fauna, but there is also a real death trap stuck between the impassable dunes and the rising tide. At one point, a ghostly figure appears along the coast. As we approach, it grows sharper; it is the wreck of a huge cargo ship. Frotamerica. is a surreal vision.

READ
The 12 best things to do in Tumstone, USA 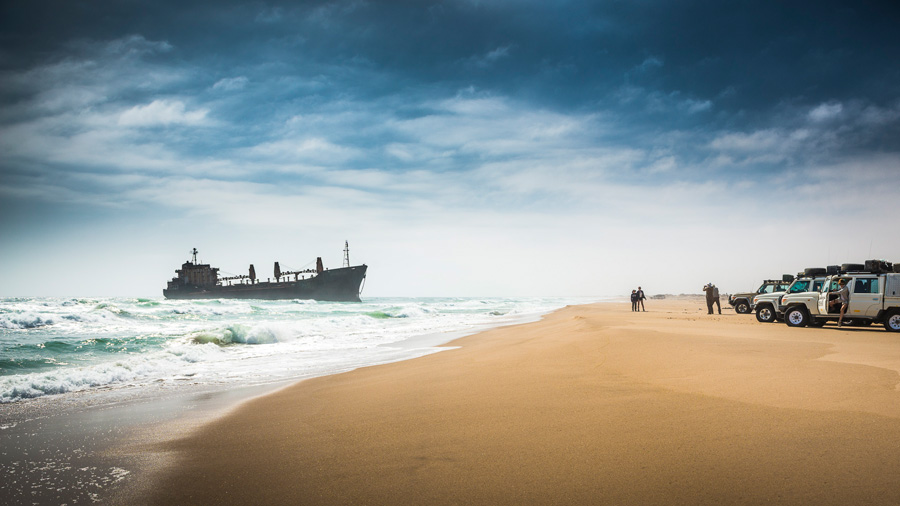 This Brazilian bulk carrier, 200m long and 35’000 tons, ran aground in February 2013 while it was going to India to be dismantled. We heard impressive accounts of the removal of 139 tons of 4x4s oil across the Namib, which helped avoid a major environmental disaster. The breach made in the bow to unload the barrels is still visible. Unfortunately, the cargo ship still contains a lot of waste that it has no plans to remove.

Apparently, the endless fog covering the shoreline and many reefs makes the Namib coast one of the most dangerous in Africa. Numerous wrecks attest to this. On our trip we passed by Frotamerica, Otavi, Shawnee, or Edward Bolen. The latter is more than 800 meters from the shore, in the middle of a sandy sea. Impressive.

HOT ZONES We get to Gottentot Bay about 1 hour before sunset. From the top of the dune we witness one of the most beautiful spectacles we have seen so far. The ocean is decorated with metallic flowers contrasting with the orange of the dunes. and a colony of flamingos flutters in the lagoon below, Magic.

The team has set up camp behind the first large dune, sheltered from the wind. Our cook prepares delicious meals in the morning and evening. A toilet tent and a shower tent are set up, we set up windbreaks, and a fire burns in the roaster.

The next day, to avoid the cold and humidity, to avoid the fog, we move away from the shore, and we plunge deep into the heart of the desert. The dunes are higher here, and the driving becomes more technical. We have not yet reached the massive climbs and descents, but rather a series of medium dunes and corridors.

We reach Saddle Hill in the middle of the morning. There is little left of the miners’ camp. The roof of some of the barracks comes out of the sand. Most of the camp has actually been swallowed up by the sand. Some prospecting tools remain here and there. The climate and salt spray have reduced all the steel to a brown foliage mold. Surprisingly, the wood and rubber are much improved. We also find some heavy machinery such as bulldozers. These were delivered in pieces and assembled here in 1940. The history of mining exploration in the Namib is fascinating. It began in the early fourteenth century. Technology was rudimentary and human life mattered little. 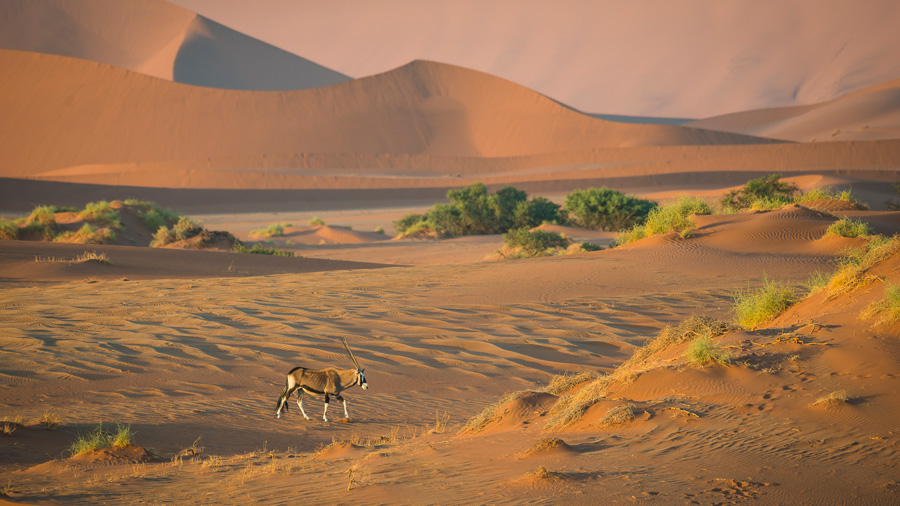 THE GREAT WALL Passing through a series of particularly clean and beautiful dunes, we return to the coast, further north. We are halfway through our journey . We have just reached the Great Wall. We stop at the top of a massive dune that plunges into the ocean, 230m below. We are tiny lost in this vastness. You really feel like you’ve reached the edge of the world. 43°. The next day we drive to the beach across the big drop to the ocean, using the slope as a giant slide. We try to time our arrival between the two waves that lick the foot of the dune. 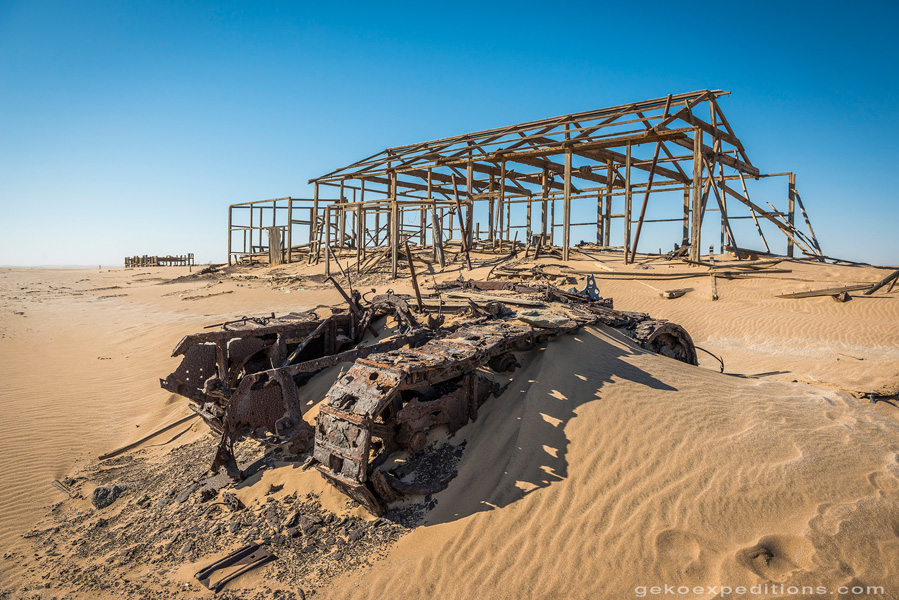 At low tide, we will be able to ride a 2 to 6 meter wide strip of sand between the foot of the dune and the ocean. The timing must be perfect or this strip will not pass.

Giant Dunes Eventually a series of rocks block the way. So we head back to the heart of the Namib. We approach a very dangerous section, the giant dunes. Quickly we are approaching a series of scary climbs and descents. The 100m to 150m descents are all the more impressive because they stand in front of the equivalent climbs. At first we say, “Impossible!” Fortunately, our south-north route allows us to tackle the steepest face slopes. We go under the mountain. 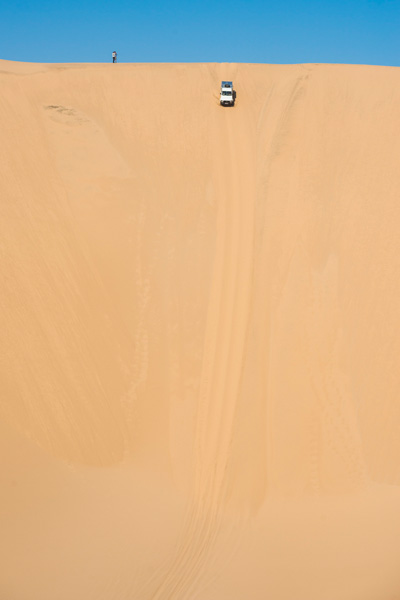 This requires good technique and expert judgment and guidance to ensure that we all manage to cross the area. This is the most technical part of the trip. The trajectory is important. 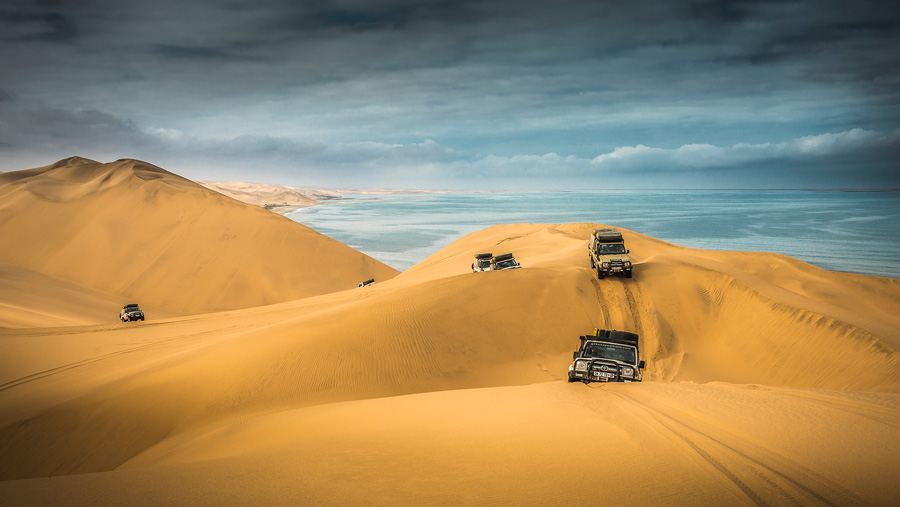 The experience of the front vehicle becomes very important. The observers are watching. The cars, all heavy and somewhat lacking in strength, struggle from the start. Some areas of soft sand show up in the middle of the climb. Trap. We turn around once or twice. When we can’t get past the section, we drop back as high as we can and then start all over again, climbing a little up into the high dunes each time. Eventually we get through it all. 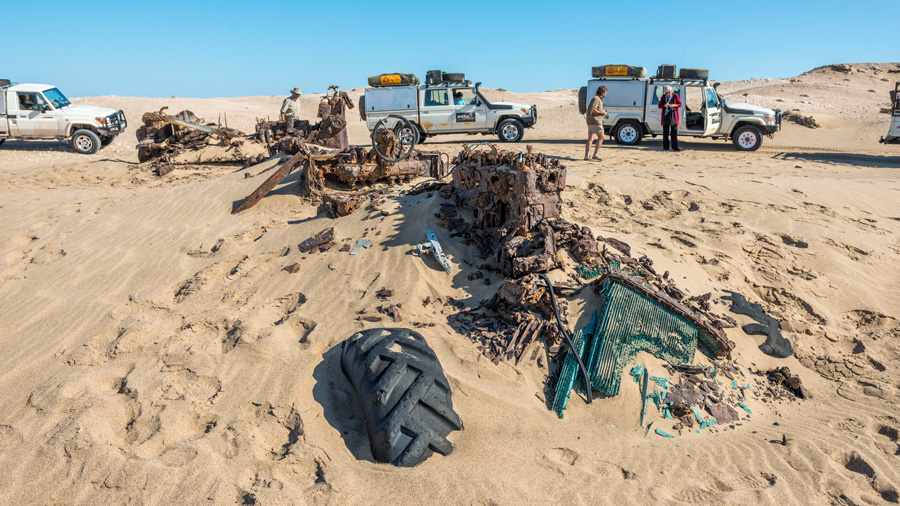 After passing through an area of purple dunes of breathtaking beauty, we reach Sandwich Nagbily for our final camp. This site is magical. The water of the underground river that crosses the Namib gathers here, creating a lagoon that is dotted with vegetation and holds several birds. 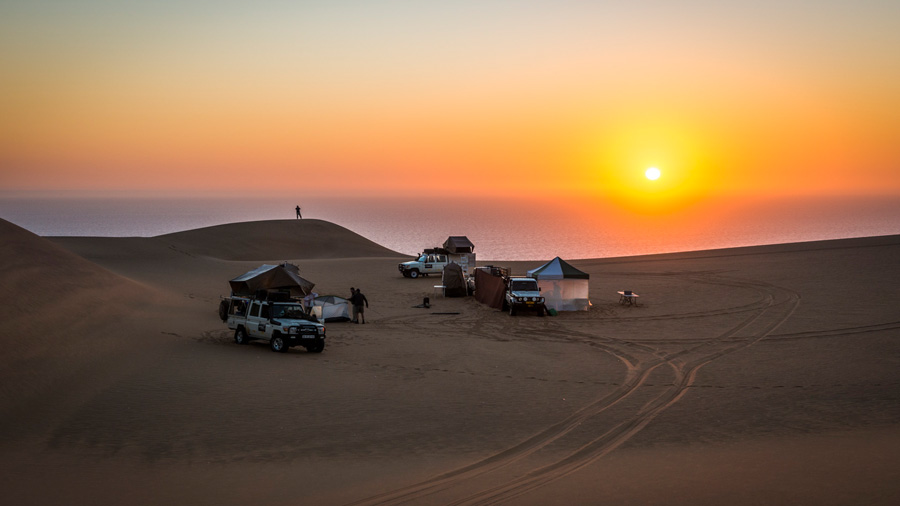 There is a peaceful and festive atmosphere at this last camp. We are all grateful to have lived a rare and magical experience so far away from our daily lives. The dream of having a baby came true, and I have to say that the reality exceeded my expectations. As if to mark the end of the journey, the full moon comes to greet us in a crystal clear sky that can only be seen in the desert. The jackals keep us company until the next day, when we enter Wolfish Bay and return to civilization.