Fascinating cliffs, marvelous limestone formations, mighty coral reefs and deep gorges… What other other ethereal landscapes can you see in far away Australia?

1. The Twelve Apostles These spectacular limestone cliffs, once isolated from the coastal cliffs, stand in Victoria’s Port Campbell National Park. They owe their appearance to erosion; the ocean waters created caves in the pliable limestone, which gradually collapsed into arches, and the arches, in turn, split apart over time.

2. Uluru Rock The bright red rock, also known as Ayers Rock, can be called one of Australia’s most recognizable symbols along with the Sydney Opera House. After all, this huge block of red sandstone reaches 9 kilometers in circumference and is the largest monolith on the planet! The local natives consider the rock sacred, and the influx of tourists to the sacred place does not please them at all. Nevertheless, the number of travelers wishing to be photographed against the background of Uluru, only increases every year, especially for them near the rock, among the desert terrain, built a resort town Yuparu with a separate airport.

3. the Great Barrier Reef The greatest coral reef system in the world now and again appears in lists like the “Seven Natural Wonders of the World. With 2,900 individual reefs, it is without a doubt the largest structure on the planet created by living organisms! For divers around the world, this place is one of the most popular destinations: after all, in addition to the corals themselves, in the crystal-clear waters can be found thirty species of whales, dolphins and all kinds of underwater animals, many of which are on the verge of extinction. Sadly, all this magnificence is now under serious threat from climate change, pollution, tropical cyclones and oil spills.

4: Fraser Island The world’s largest sand island, Fraser is home to wild stands of rainforests, mangroves, eucalyptus groves, bogs, sand dunes and coastal wastelands. Although it has been inhabited for 5,000 years, today its population does not exceed 400. The variety of local wildlife is impressive, including 19 species of bats, wallabies, flying foxes, dingo dogs and crocodiles.

5. The Pinnacles Wilderness Most Australians didn’t even know it existed until 1960 when it was annexed to Nambungu National Park. Now this fantastic limestone formation attracts more than 250,000 tourists every year. Scientists are still arguing about how these formations came to be, but what is certain is that the limestone consists of ancient sea shells that have been transformed into sand over millions of years, from which the plains wind created the dunes.

6. Shark Bay Shark Bay (“Shark Bay”) runs deep into the westernmost edge of the continent. Its waters, surrounded by beautiful cliffs, are home to sea cows, dolphins and about 25 species of endangered mammals. The bay is also interesting for the so-called stromatolites – ancient outgrowths on the shallow bottom, which are imprinted with the traces of the oldest living inhabitants of the planet.

7. Kakadu National Park One of the country’s most important nature reserves is covered by dense rainforests where Australian Aboriginal people have lived since ancient times. And while tribal life has become a show for tourists these days, the wild and ancient atmosphere of the place is forever etched in the memories of travelers. Thick jungle, swampy marshes, cliffs covered with ancient drawings and the rarest inhabitants of ancient nature – it has everything to feel like a hero of an adventure movie.

It’s unlikely you’ve ever heard of the Seven Wonders of the World. What do you know about Australia’s twelve wonders? Yes, yes, imagine that, as many as twelve wonders nestled on one continent.

Australia is an incredible country of contrasts. On one continent, in one country there are deserts and snow-capped mountains, tropical forests and the ocean coast. Let’s look at the unusual beautiful places created by nature itself. 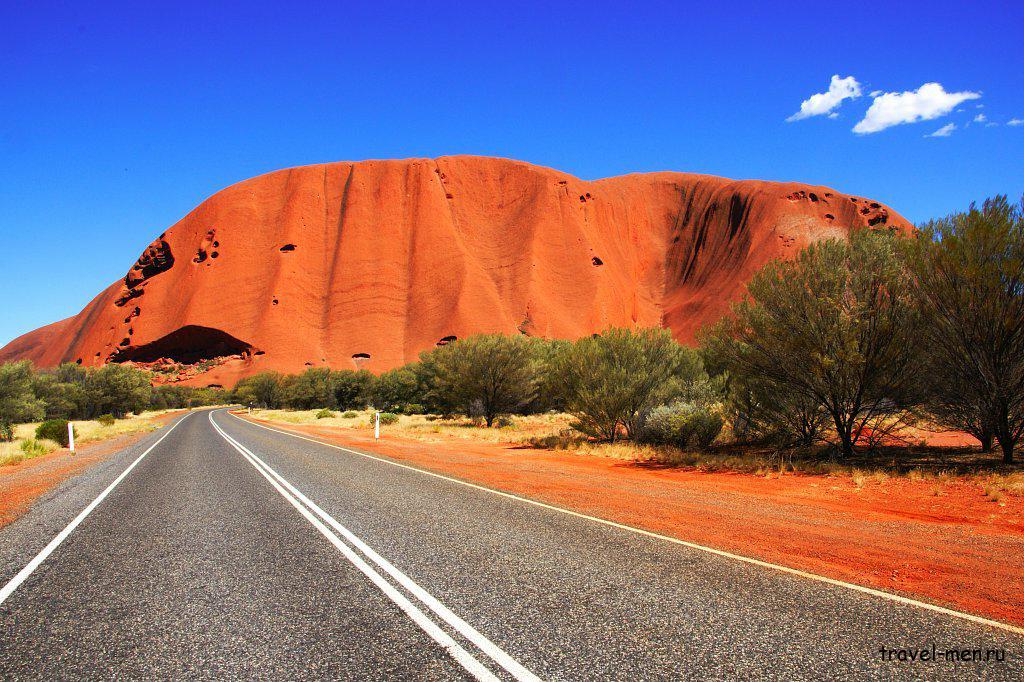 This is a huge monolithic red sandstone rock located in the center of the desert. Historians believe that this incredible natural phenomenon began to form 550 million years ago. The height of the rock reaches 348 m, length – 3.6 km, width – 2.9 km. In addition, this landmark is known for the fact that the color of the rock changes depending on the course of the day. Depending on the light it changes color from burgundy-red to terracotta and brown. The caves of Uluru are decorated with ancient drawings, so the Australians consider this rock a sacred place, and its incredible size attracts hundreds of tourists every year. 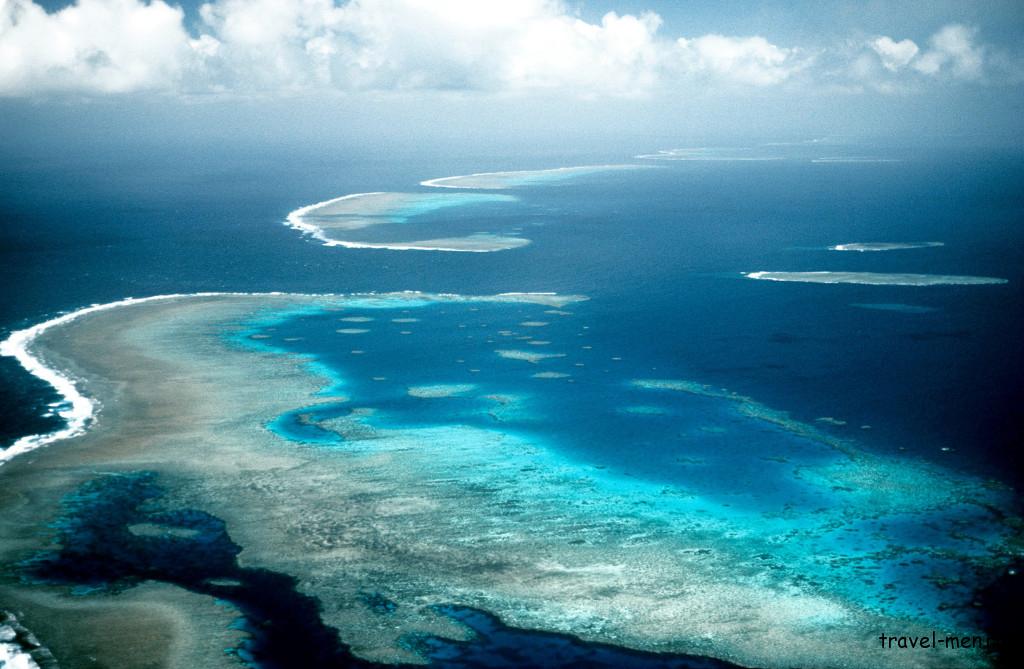 It is located in northeastern Australia, near the state of Quicksland. It is a huge ecosystem, with a total length of 2,300 km. It consists of thousands of reefs and hundreds of islands formed by corals of various species. The Great Barrier Reef is home to many fish and mollusks, as well as sharks, dolphins, and turtles.

Most of the reef is closed and protected because it is a UNESCO World Heritage Site. Moreover, due to its size, the reef is visible even from space. This attraction attracts a huge number of tourists and divers from all over the world.

However, today the reef is in danger. Climate change, pollution, oil spills, and other factors are threatening the home of hundreds of rare marine life. 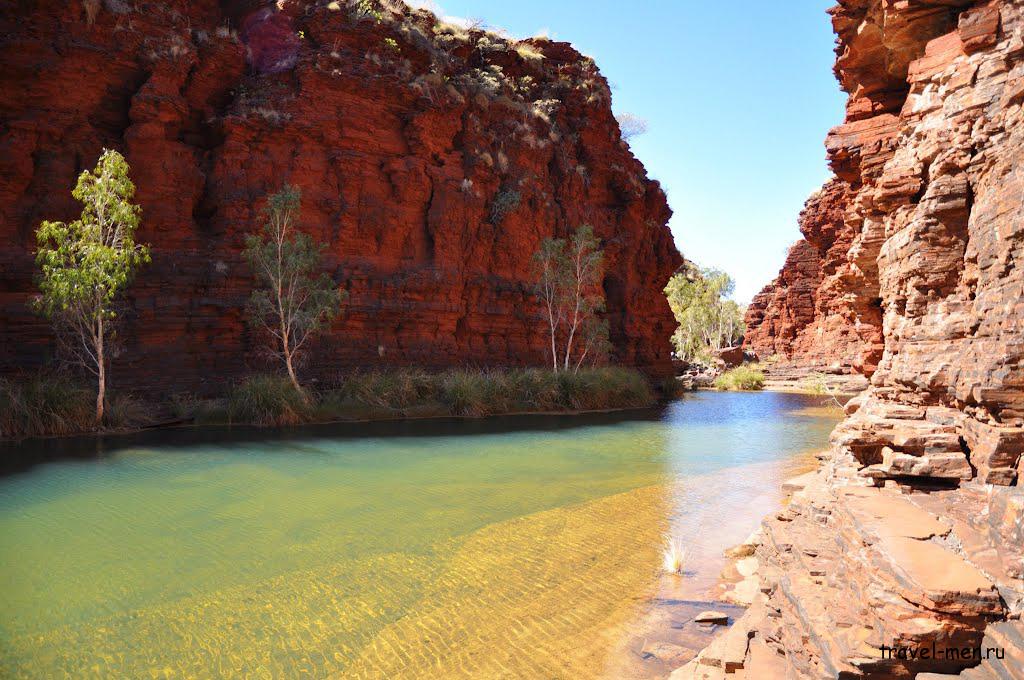 At the heart of Nitmiluk National Park in Australia is the large and majestic Catherine’s Gorge. Touring this gorge takes tourists breath away from the spectacular scenery created by nature itself. The Gorge runs along 13 navigable canals that are 62 miles long.

On the edge of the west coast is Shark Harbor, a place that has become home to 12 percent of the dolphin, bird, fish and reptile population. Twenty-six endangered species live here.

This attraction is also famous for its view: the harbor shore is dotted with stones called stromatolites, which are a sign of the first life on earth. The entire coastline is covered with stones, which smoothly transition into the water surface.

5. Te pinnacles or the desert of pointed rocks 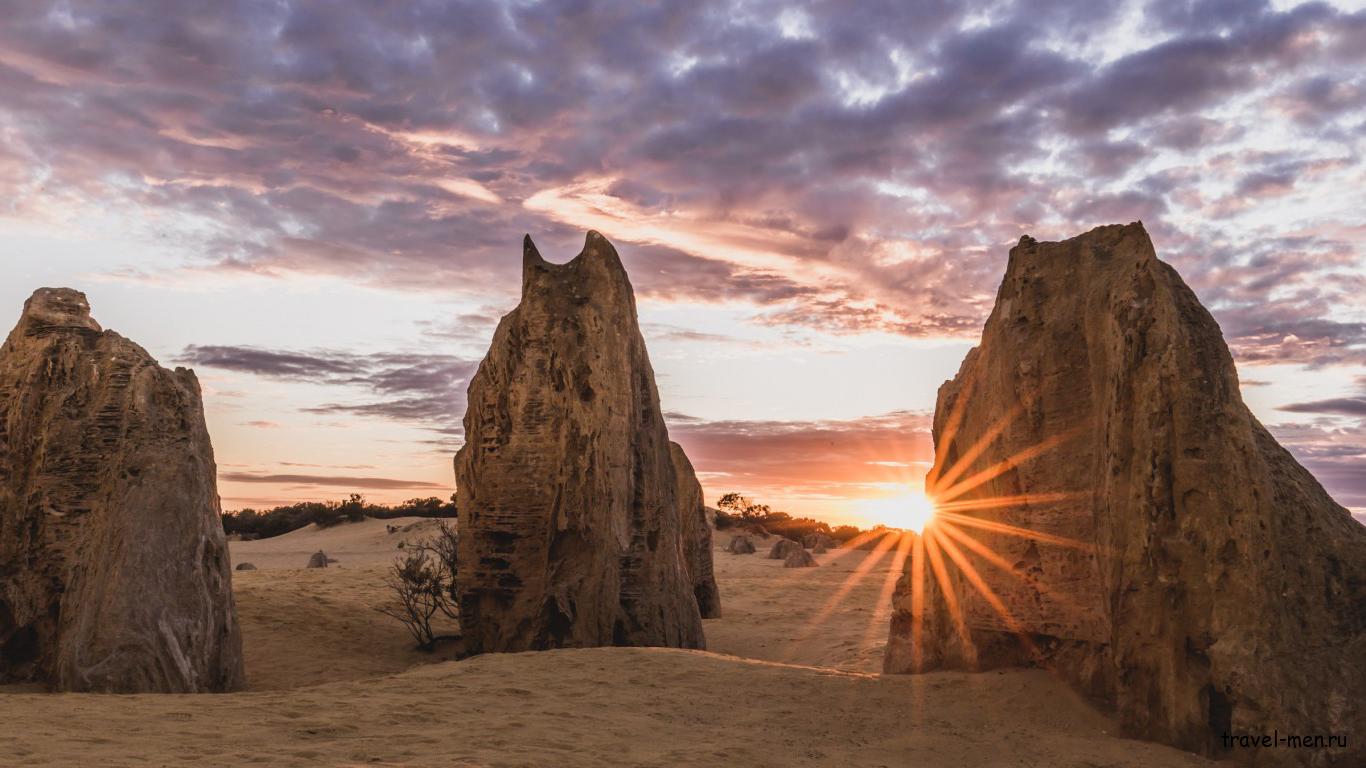 In southwestern Australia is a small desert known for its pointed rocks. Scattered throughout the desert are vertical, freestanding rocks ranging in height from one to five meters. These stones are formations of limestone. Nowadays there is no exact opinion about their origin, we only know that the shells of prehistoric mollusks form the basis of the stones. Some of the limestone gradually turned into sand, thereby forming a desert. 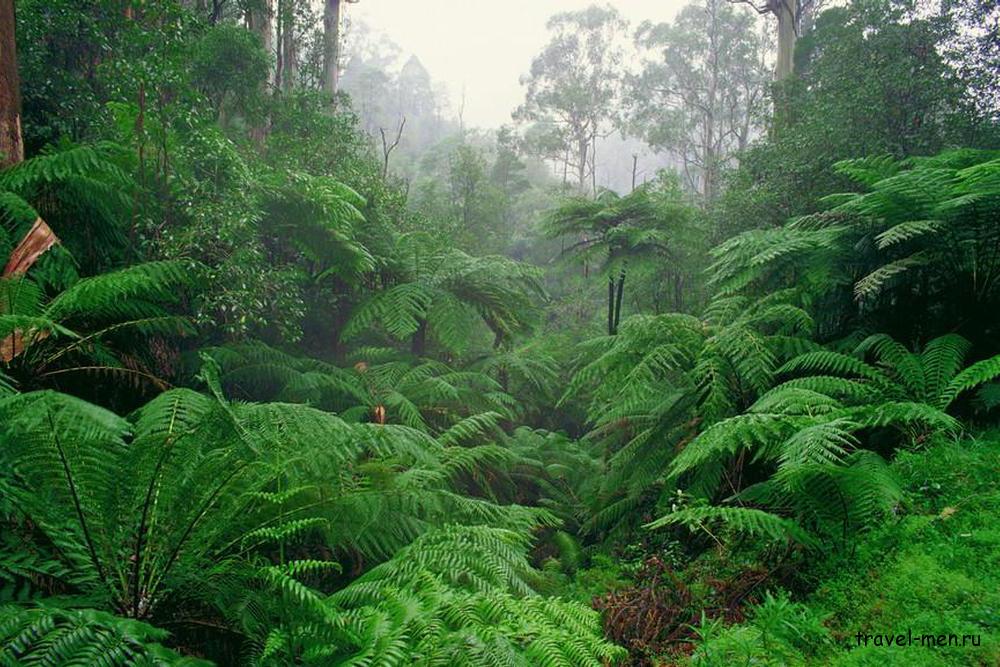 This reserve covers more than 56 hectares of forest. The nature here is so untouched by man that sometimes it seems as if you have got to a desert island.

The rainforest is home to about 65 percent of Australia’s mice and butterflies, so it’s protected by Daintree National Park. The forest is also home to some of Australia’s oldest Red List plants and is home to 430 species of birds. 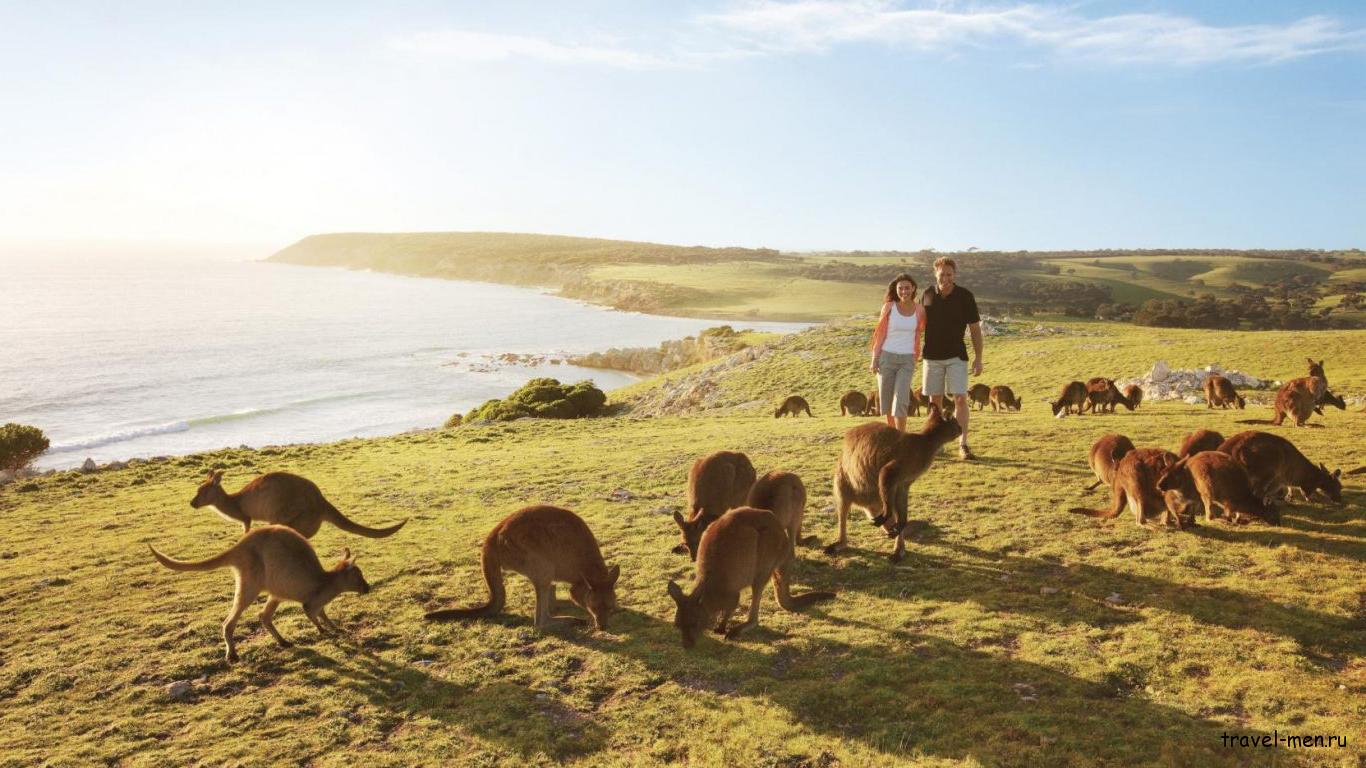 Kangaroo Island is the third largest of all the Australian islands and is located off the coast of South Australia. However, only about 4,000 people live on the island. More than a third of the island is a nature reserve, and more than half of the island has never been logged. This is why the island is home to sea lions, koalas, many species of birds, colonies of penguins and kangaroos. The island has an incredibly diverse landscape: marshes alternate with dunes, and rainforests seamlessly transition to cliffs. 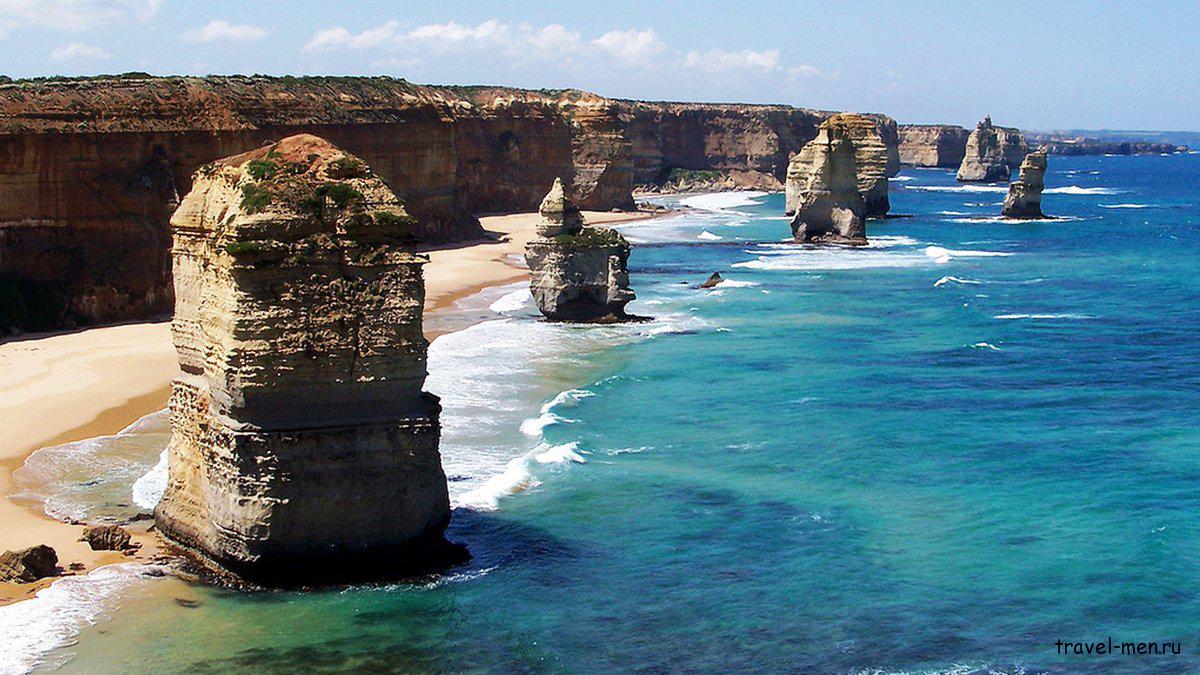 This popular landmark is located in the ocean in Victoria. The individual limestone rocks stand like silent apostles along the sea shore. The origin of the rocks is as follows: the raging waves pierced a cave in the rock, which soon collapsed forming arches. Over time, the arches fell apart and formed columns. The height of the rocks reaches 45 meters. Originally there were 9 rocks, but in 20005 one of them collapsed due to erosion.

The attraction is popular because of the beautiful sight: waves crashing on the powerful, majestic rocks. 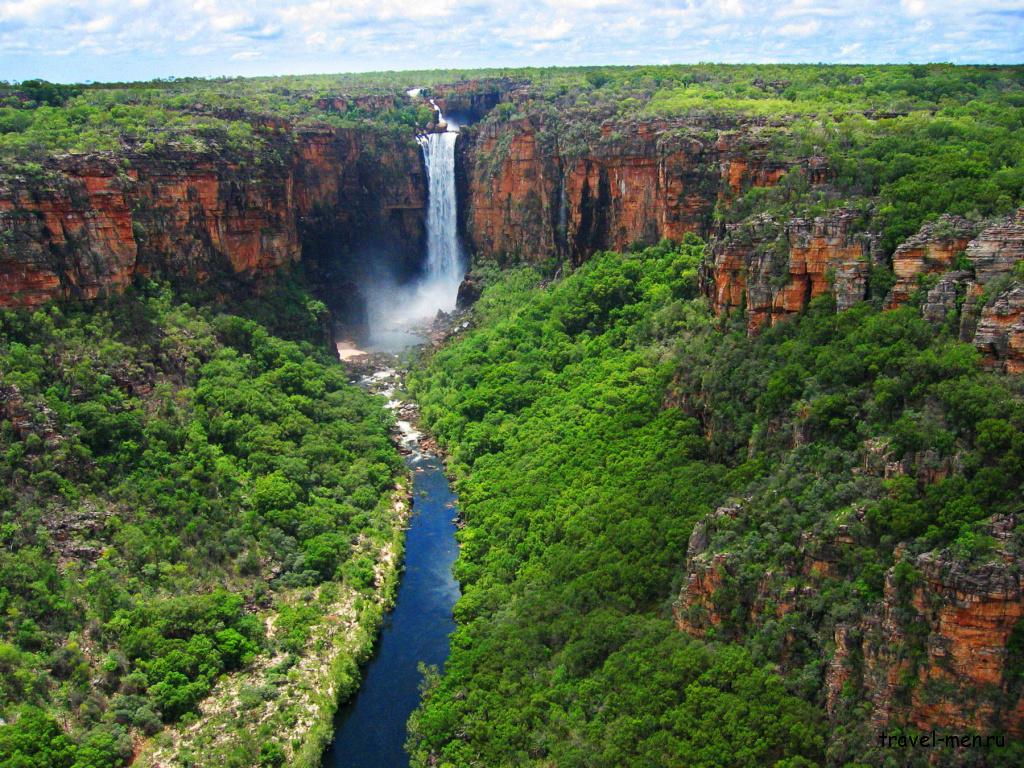 This is a huge reserve located in the north of Australia, which has a diverse landscape: rivers, forests, marshes, cliffs, hills and plains. The park attracts tourists with its diversity of flora and fauna: there are more than 2000 rare species of plants and animals, birds and reptiles. In addition, some of the cliffs have preserved prehistoric drawings, so Kakadu Park has an important historical significance. 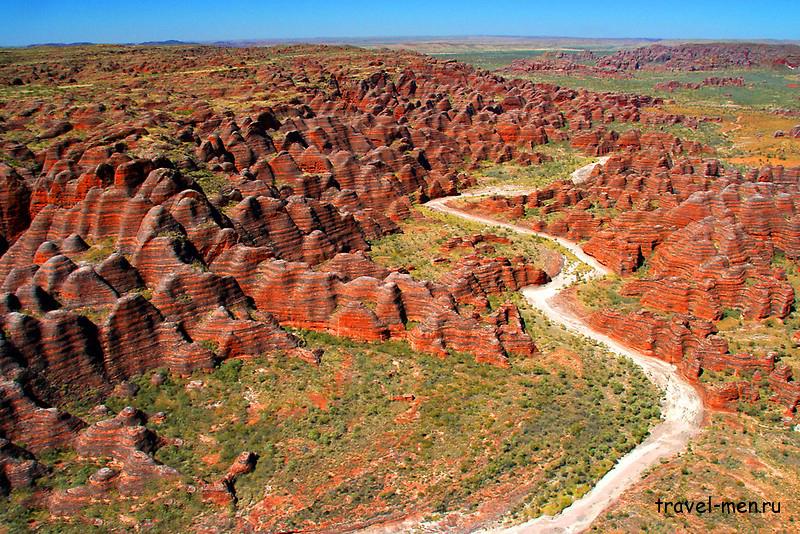 This Australian mountain range is also recognized as a UNESCO conservation site. It is a unique mountain range that is a succession of orange, black and white formations. It is located in western Australia. Research claims that the sandstone that makes up the rocks is more than 350 million years old. According to historians, the rocks may have been uplifted by a meteorite fall.

Moreover, today access to these areas is restricted. Beyond these cliffs are the last unexplored lands of Australia, where the Aborigines now live. 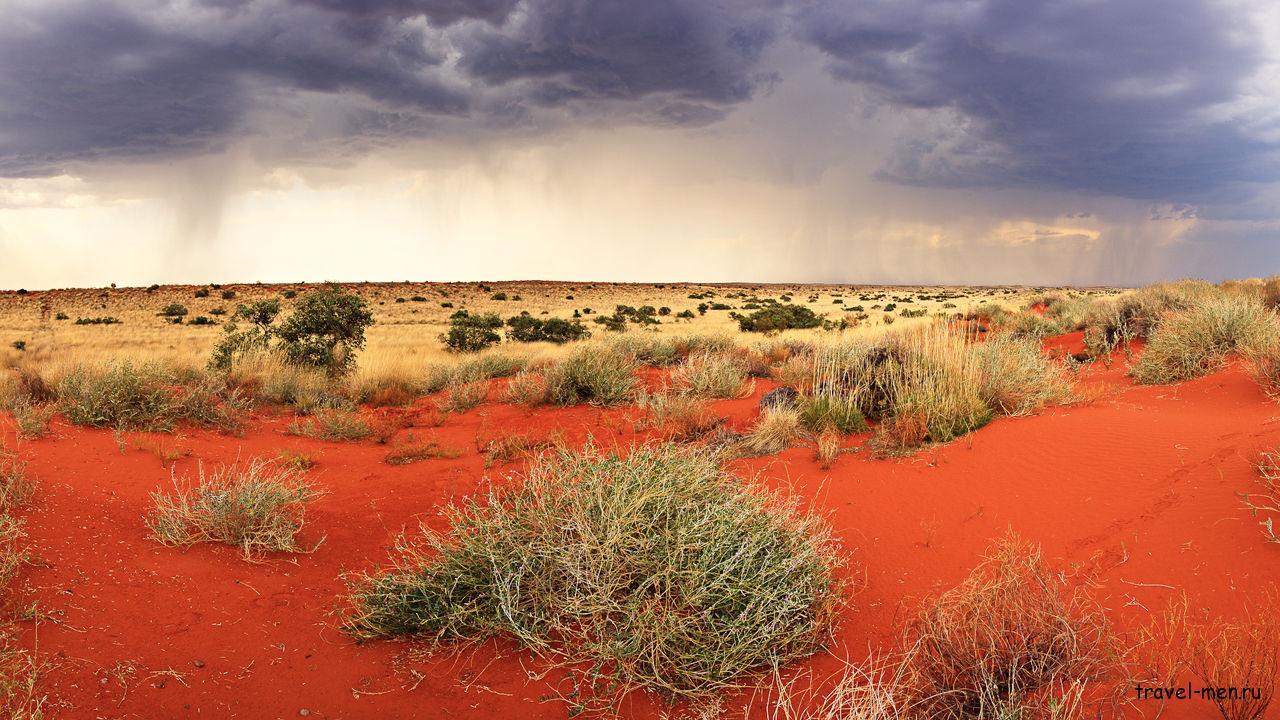 This desert is located in the very center of the continent. Because of its very arid climate, it is virtually uninhabited, and it is under this desert that the Great Artesian Depression is hidden.

Also, thanks to the vegetation in the desert is almost no wind, so sophisticated tourists can see the longest sand dunes, which are invariably in the same place. 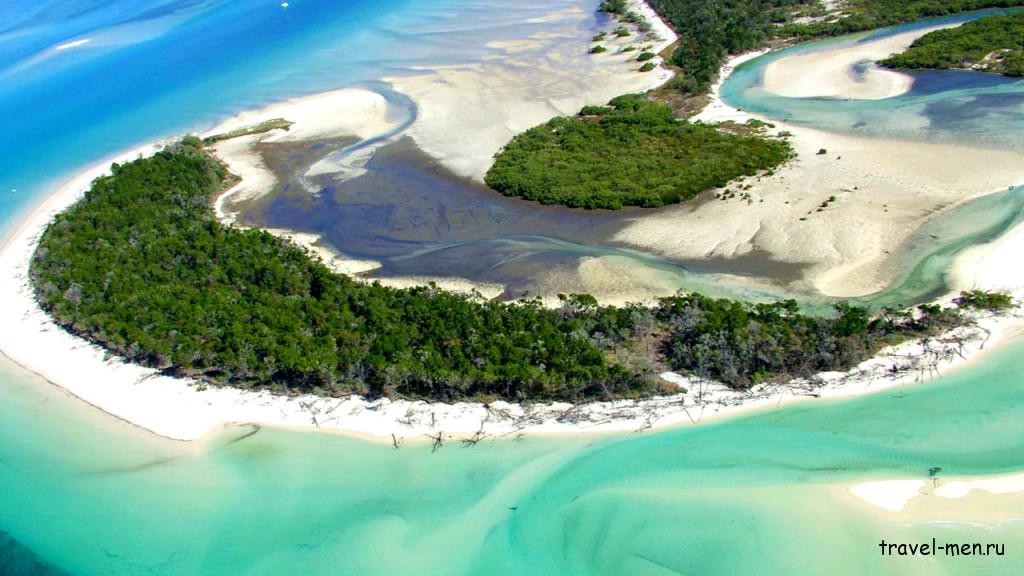 The island is located off the east coast of Australia in the state of Quicksland. It is the largest sandy island in the world. The island is beautiful for its natural diversity: there are tropical trees and eucalyptus, there are mangroves, and the swampy terrain smoothly turns into sand dunes.

To date, the island has no more than 500 people, but there are many times more animals – echidnas and flying dogs, dingoes and saltwater crocodiles, wallabies and bats found their home on Fraser Island.

Thus, the territory of Australia gathered an incredible variety of unusual natural objects. The territories of this continent have not yet been finally explored: archaeologists continue to find a variety of rock art. It is because of little human intervention on the continent manages to preserve nature in its original form, and thus provide natural conditions for the lives of thousands of animals.