What is worth seeing in Piran?

Piran is a picturesque town with narrow, ancient streets and medieval buildings. It fascinates tourists at first sight and gives the opportunity to get acquainted with the most interesting sights and historical monuments. At first the city seems a bit like a toy – the walls of local buildings are decorated with bas-reliefs with the famous Venetian winged lion, and among the winding streets can easily get lost. This is probably the unrivaled charm of Piran, one of the most photogenic Slovenian resorts.

During the entire period of stay travelers have the feeling of being in an unusual open-air museum or inside a colorful postcard with fabulous scenery and historical monuments.

Before going to explore the central part of the city, tourists should climb the fortification wall, which almost encircles the oldest part of Piran. Construction of the defensive wall began in the VII century and reached its final stage only by the XVI century, when the structure was ready to defend practically the entire peninsula against invaders. The wall consisted of eight defensive towers and seven city gates. A few years ago, the towers and connecting trails of the wall were restored. And now for just 2 euros you can admire a unique view from the height.

Entrance to the wall is through a turnstile, which opens when you drop a coin. And this is just the beginning of the difficult journey to the top of the structure. However, once the steep stairs and narrow passages are overcome, travelers will realize that all the hardships were in vain. From the wall one can admire not only the mesmerizing view of Piran, but also get a glimpse of Venice.

The next place worth seeing in Piran is the central square of the city – Tartinijev trg, around which all life revolves. The square got its name after the most famous native of Piran – violinist and composer Giuseppe Tartini. He was born in the house on the east side of the square. Now there is an exhibition devoted to the life and works of the outstanding musician. The most significant exhibits are sheet music, a violin, a portrait and a death mask of the violinist. The square is also adorned by a monument to the great Tartini, behind which stands the City Hall. In addition, for fourteen years in a row the city hosts a festival of classical music named after the famous composer. 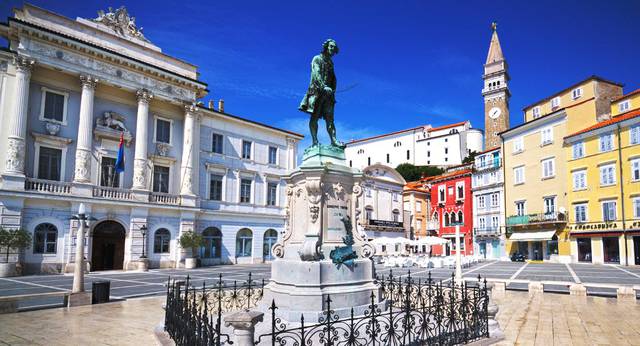 As for the square itself, many years ago there was a harbor for fishing boats. But the dirt, unsanitary conditions, and the smell coming from the stagnant water got to the point where the townspeople got tired of it. The decision was eventually made to fill in the harbor and build a large square in its place, which became an ornament of Piran.

There are practically no modern buildings in the city. All the architecture here belongs to the early and late Middle Ages. The city’s main square, for example, is a monument of architecture, and almost every house along its perimeter can be considered a monument of architecture. For example, inquisitive tourists are taken to the red house called “The Venetian” as part of organized excursion groups. This eye-catching building has its own legend, according to which the house was given to a beautiful local girl by a rich Venetian merchant. In order to avoid gossip from the townspeople, the lover decorated the facade of the building with the inscription “Lasa Pur Dir”, which means something like “Let them talk”. 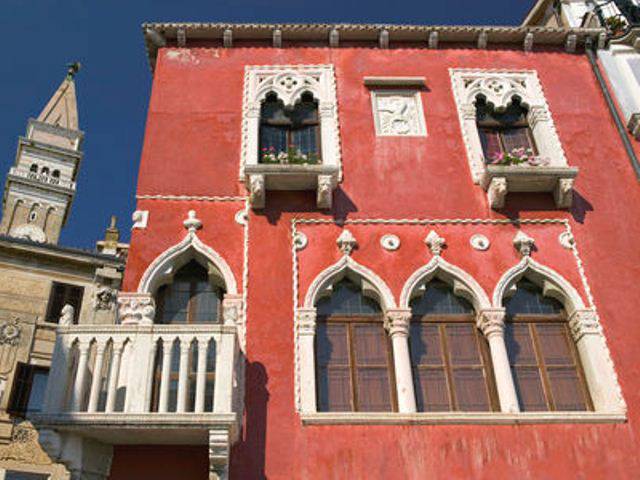 There are many monasteries and churches in Piran. Some of them do not look like places connected to God at all. What can not be said about the tallest building in town – the bell tower of the Cathedral of St. George, the patron saint of Piran. The church complex, consisting of baptistery, bell tower and church, is located on a hill near the Tartine Square. Its exact date of construction is unknown. We only know that the original bell tower and baptistery were destroyed and new ones were built in 1608 by architect Giacomo di Nodari, following the example of the Venetian bell tower of St. Marcus Cathedral. This is the appearance of the complex to the present day and presents itself to travelers.

Inside the church you can admire the works of Angelo de Costera. If desired, you can climb the wooden stairs to the top of the bell tower. It costs a token fee of one euro.

Another house of God hides in a narrow street of Piran in a completely inconspicuous house. It is a small church of Our Lady of the Snows, built in 1404. The frescoes decorating the walls of this church are from the second half of the seventeenth century, and on either side of the arch are ancient paintings – “Crucifixion” in 1460 and “Assumption of the Virgin” in 1500. Originally the church was a small private chapel, it is now open to all comers.

If you have some free time, you can also take a walk to the 1st of May Square, which used to be the main town square. A stone cistern, built in 1775 to collect water after a drought, is the jewel of the square. Liquids were collected from the surrounding roofs with the help of troughs. The steps of the cistern are ennobled by two sculptures of Justice and Law. The data on the shield of one of them informs about the date, the reason for the construction of the stone cistern and about the names of all the citizens who contributed financially. The shield of the second statue is decorated with the coats of arms of two influential families Bemba and Marcello, as well as the coat of arms of the city of Piran itself. 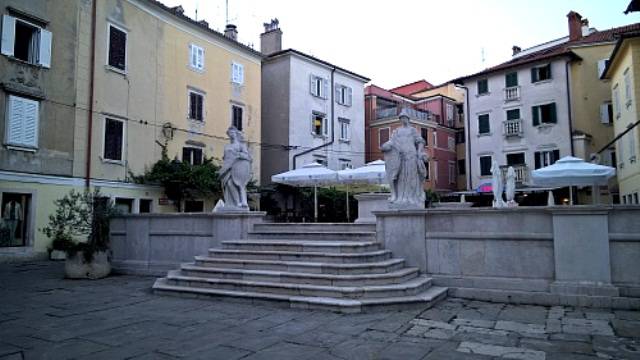 While exploring the square, travelers can look into the oldest church of the resort located here. The church of St. Stephen was built in the XIII-XIV centuries and served as the residence of the Order of the Fraternity of the Last Hours. Now looking inside the church, you can admire the paintings of Matej Palma and Jacob and see the statues of St. Stephen and St. Lawrence.