Have you ever been to Amsterdam? If yes, then this city will never leave your heart… And if not, read these facts that will make you put Amsterdam on your list of cities to visit for sure! 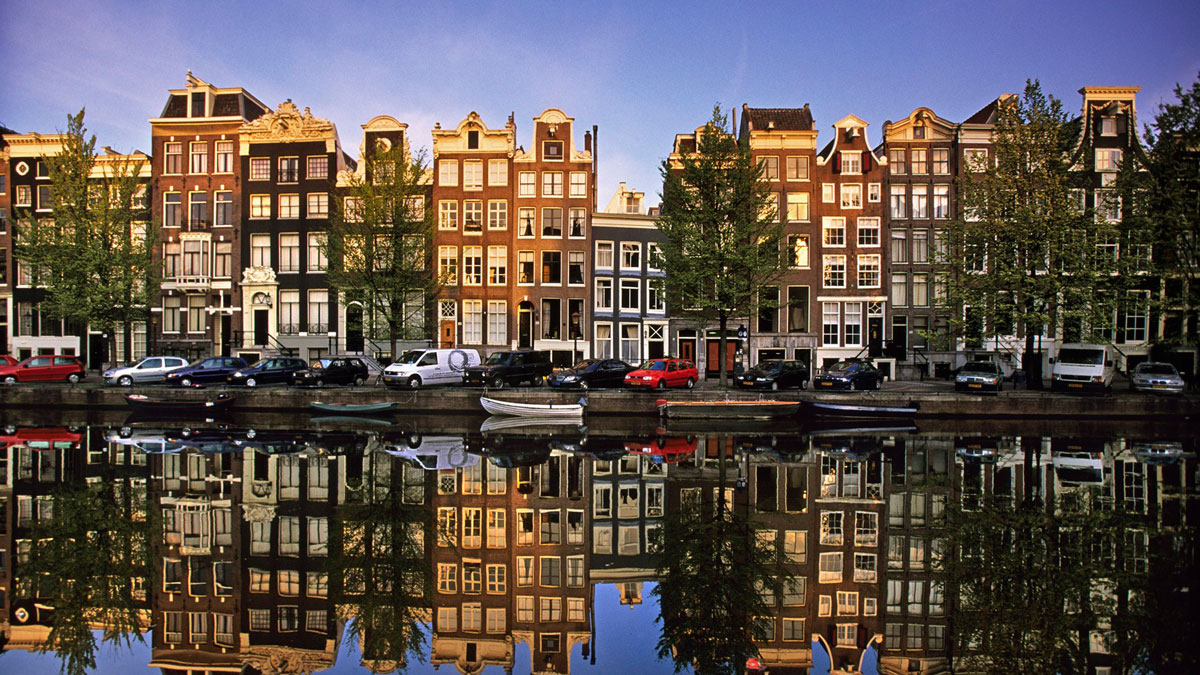 1. On Dam Square, the main square of Amsterdam, the traffic of tourists does not stop on any day of the year at any time of the day. Some tourists look a bit… strange.

2. the people of Amsterdam always carry a raincoat, because the weather in Amsterdam is unpredictable because of its proximity to the sea and it can start raining at any moment. With an umbrella on a bike (and that is the main transport in the city) is not particularly rideable, but the raincoat is just right.

3. On April 30, Queen’s Day, the entire city is dressed in royal orange.

Amsterdam is a city of canals with more than 600 bridges. The most beautiful are the Blauburg and the Mahere brug (“Skinny Bridge”).

5. The most pleasant way to get around Amsterdam is by bicycle. Over half a million “iron horses” are registered to locals! Tourists can rent bikes right in the city center. 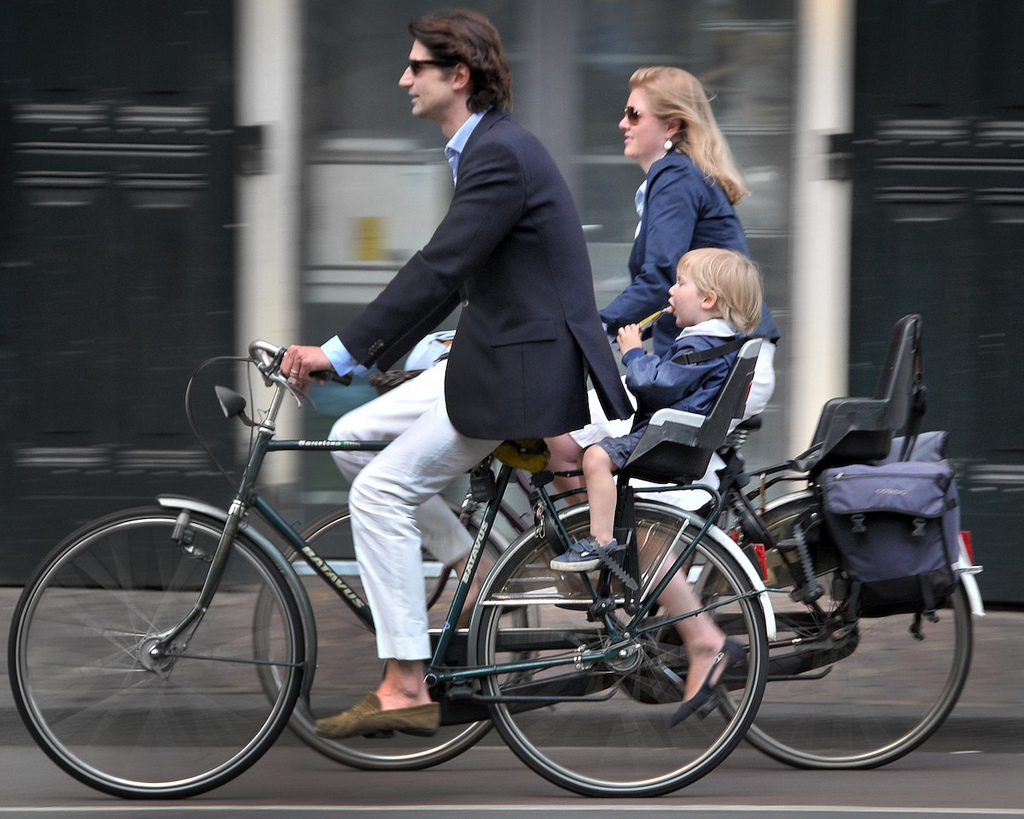 6. As you know, Amsterdam is located below sea level and is protected from it by a dam. According to legend, once the sea found a small hole in the rock, which under the pressure of the water mass could grow, and then goodbye both the dam and the beautiful city. But a passing boy noticed the threat and did not get confused – plugging the hole with his finger, he began to call for help. The city was saved!

7. Amsterdam is home to several world-famous beers such as Grolsch. This beer has been brewed in the country since 1615 using an exclusive Dutch recipe. It is served in 250-gram glasses with a foam cap of an inch and a half.

9. The basis of the city’s prosperity is beer. In 1323 the ruler of Holland improved this port city for easy importation of beer.

READ
Pena: a fairy tale castle in all its glory, Portugal

10. In the 18th century, the city council, in order to reduce noise levels, banned the movement of carriages through the paved streets. Therefore, they had to travel in the summer in sledges. 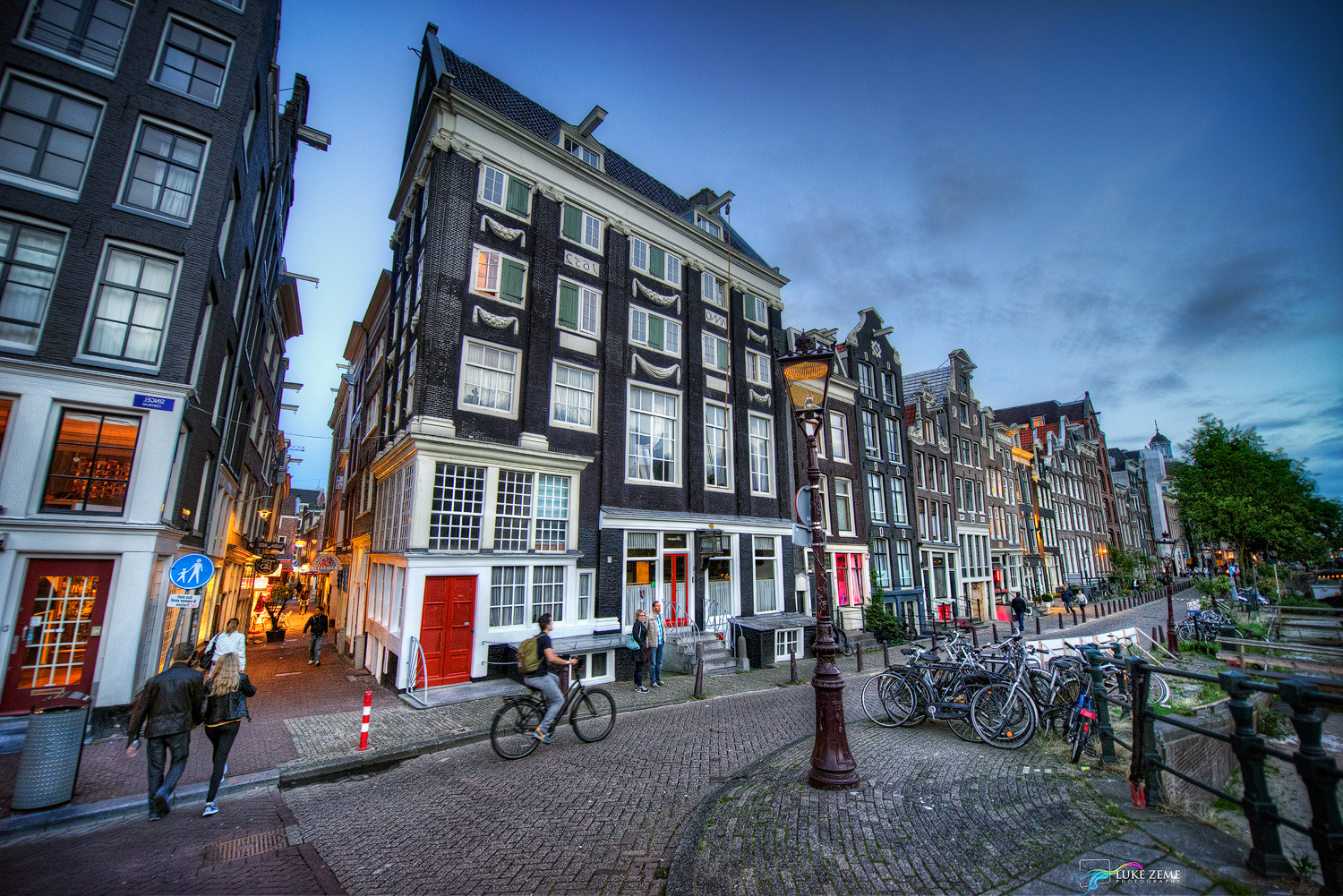 11. The city almost gave its name to New York. The Dutch colony of New Amsterdam was renamed New York in 1664.

12. The Dutch sex industry is valued at more than $2,000,000. This amount is divided roughly in half between pornography and prostitution.

13. Amsterdam is one of the safest cities in Europe, but you have to watch out for the usual petty cheating and pickpockets. The police here are also very quiet, but it is always better to carry your passport (it is required by law and tourists are sometimes asked to show an identity document).

14. Among the 2,400 floating houses on the city’s canals is the “cat ship”, where homeless animals live.

15. In the Maritime Museum of the Netherlands you can see a unique exhibit – a gray piece of leather with a white patina that once belonged to Lieutenant Jan van Speijk. In 1831, when the Belgians defeated the Dutch fleet, the lieutenant refused to lower the flag. Instead, he threw a cigar into the powder magazine, blowing up both himself, the ship, and the crew. 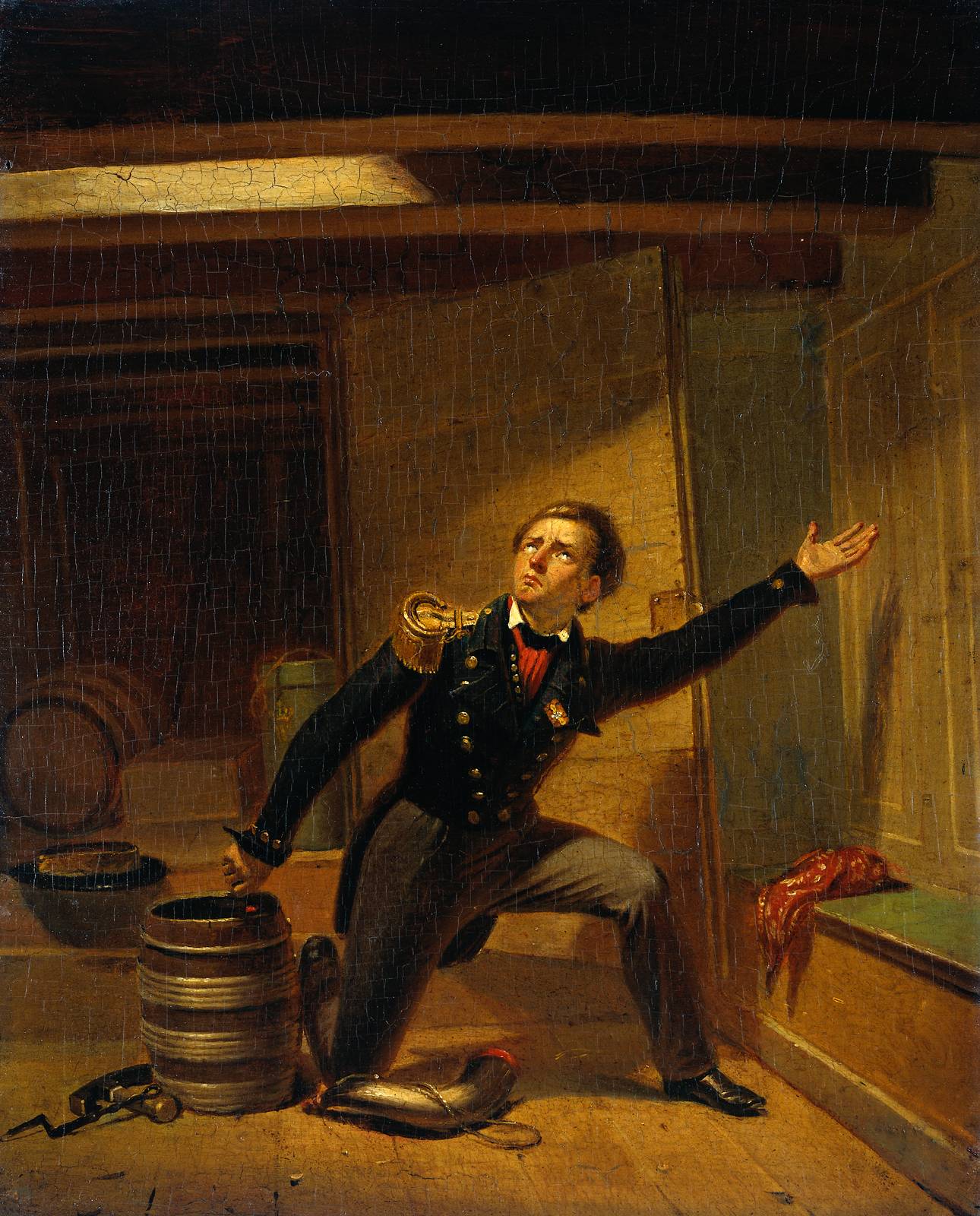 16. Amsterdam is home to the most incredible museums, including those devoted to the history of sex, drugs, tattoo art, etc.

17. Amsterdam is often compared to Venice, but there are considerably more canals and bridges. The city has about 1200 bridges, more than 150 canals and about 90 islands. Amsterdam is built entirely on huge piles driven into the ground beneath the water column.

18. Despite the legalization of light drugs, Amsterdam is one of the safest cities in Europe.

19. It is said that when an ‘iron horse’ falls into disrepair, real Amsterdamers throw it into the canal, so the bottoms of the most popular canals are literally dotted with bicycles.

READ
Beaches where you can walk your dog in Spain 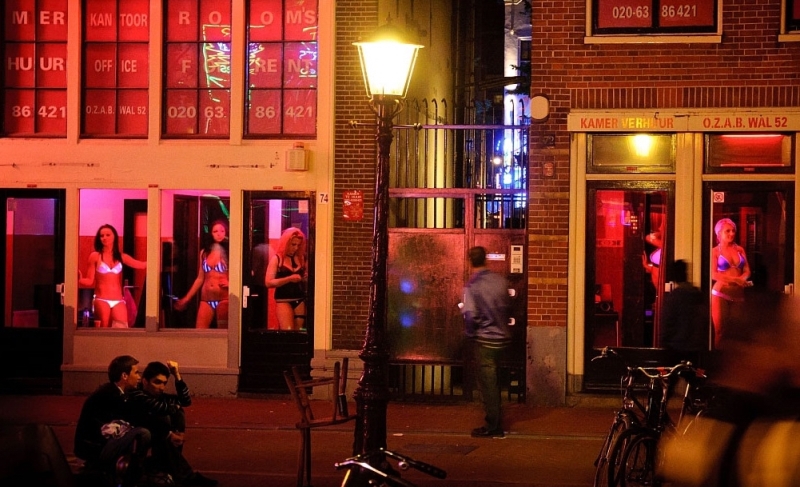 21. Amsterdam was the first city in the world where same-sex marriage was officially legalized – it happened in 2001.

22. Amsterdam’s parks and nature reserves account for more than 12% of the city’s total area, but heavy urbanization has completely destroyed the natural landscape and landforms.

23. More than 170 nationalities live in the Dutch capital!

24. The police department in charge of parking is the only one with armored windshields because there were cases when angry motorists were very “unhappy” with the wheel blockers.

25. You won’t be able to buy an apartment in the city center. You will have to buy a whole house or several houses at once. 26. There is not a single free parking lot in all of Amsterdam.

27. Prostitutes in Amsterdam pay taxes, have a social package and their own union.

28. In Amsterdam there is an entire district of 18,000 floating houses for 45,000 people. Some of them are placed on special piles.

29. The Dutch love to make mashed potatoes (eten prakken). Not only from potatoes. They mash any kind of food. The best example, demonstrating the love of the Dutch for mashed potatoes, is the traditional dish “stamppot”. It is made of herbs and various vegetables. Everything is boiled, then mashed and topped with sausage. Some Dutch even make pasta and fries into a kind of mixture.

30. In the Netherlands the curtains are either wide open all day or not at all. The Dutch always want to see what’s outside? Trying to let more light into the living room? Or just don’t want to buy curtains? Whatever the reason, it’s obvious that the Dutch are open-minded. But don’t dare look through the windows to see what they’re doing. It is considered very indecent.

READ
Little-known but surprising places in Thailand and Malaysia

To your attention are the most unusual and interesting facts about the capital of the Netherlands. 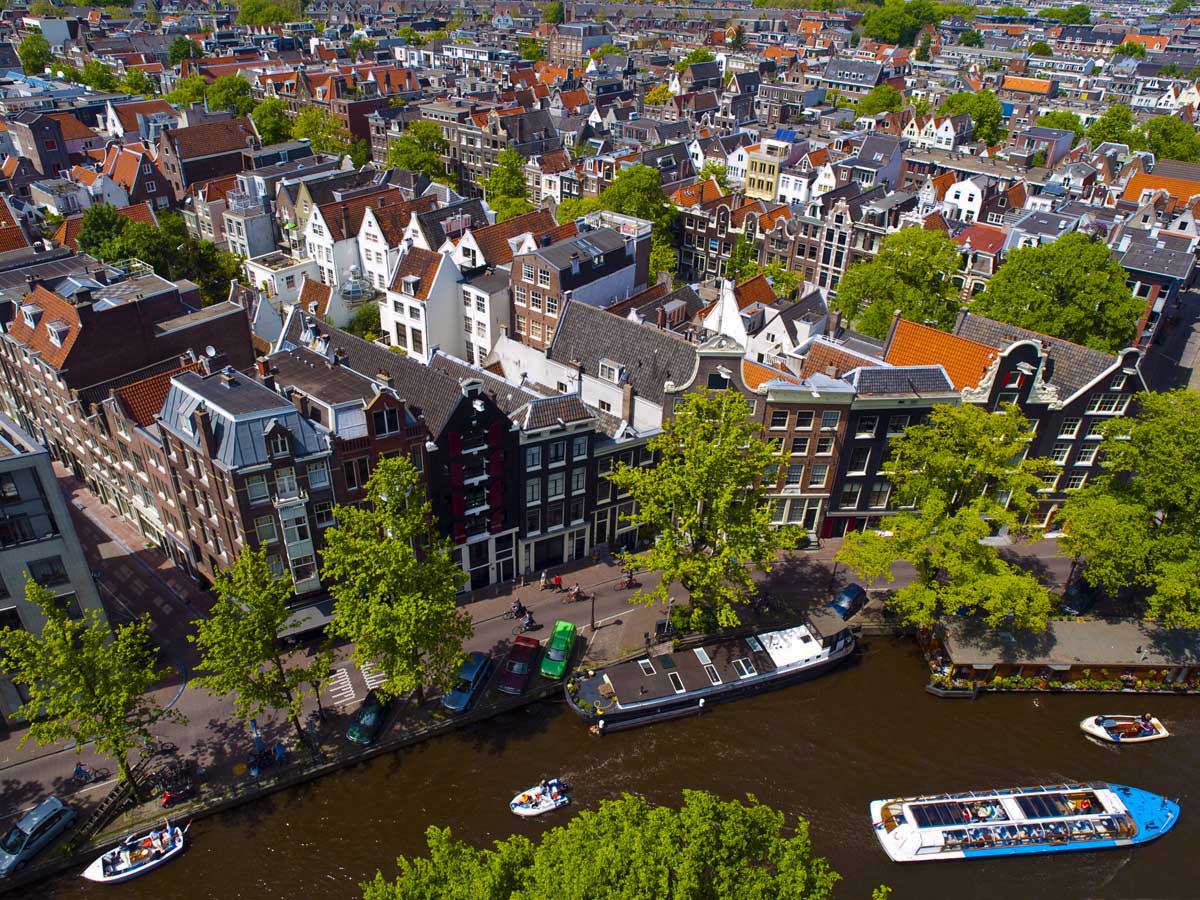 2. Dams and the city’s name

The city’s famous canals didn’t appear here for nothing. The city is located in a valley near the North Sea gulf. To prevent the territory from being flooded, back in the 13th century, dikes were built here. In fact, this is associated with the formation of the city: the name “Amsterdam” is derived from two words “Amstel” – the river flowing through the center of the city and the “Dam” – dam. Right on this dam today is the main square of the city – Dam. The whole city is essentially built on the swamp, all the buildings are kept on 12-20 meter piles. One of the most prominent architectural structures of the city – the Royal Palace stands on 13659 piles!

The dams do an excellent job of protecting Amsterdam from flooding, but it is not difficult to guess that in the event of a major rise in the level of the world’s ocean, the beautiful city would be one of the first to be under water. 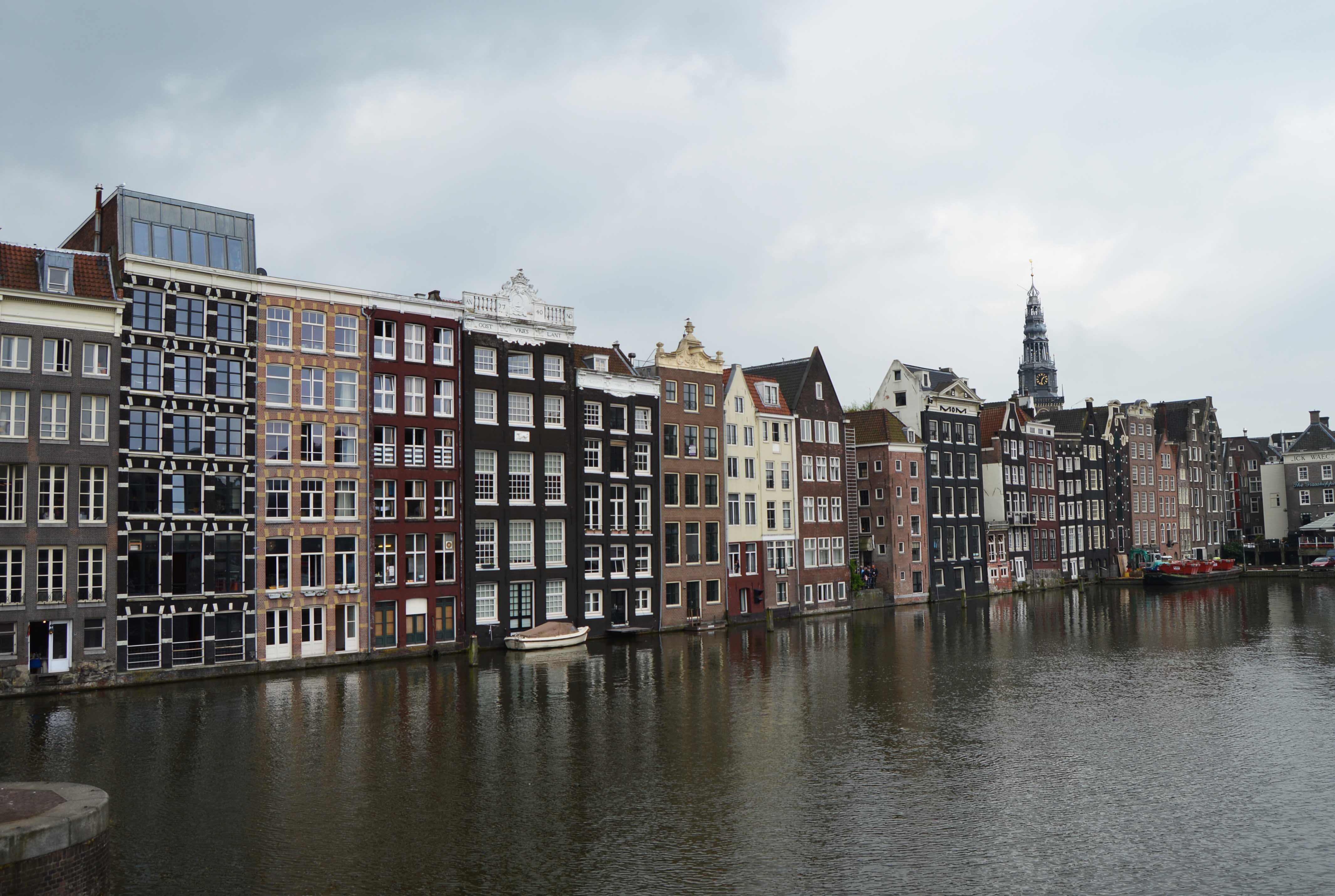 In Amsterdam, so called houseboats are popular – small boats moored on the shore, designed for permanent residence. They have sewage, running water, and electricity. Houseboats have their own address. They appeared due to the fact that in the past, Amsterdam faced a constant shortage of housing, there was a very high tax on land. People were forced to live on boats. Today, however, it is believed that the houseboats are owned by fairly wealthy people, because they are very expensive to maintain. 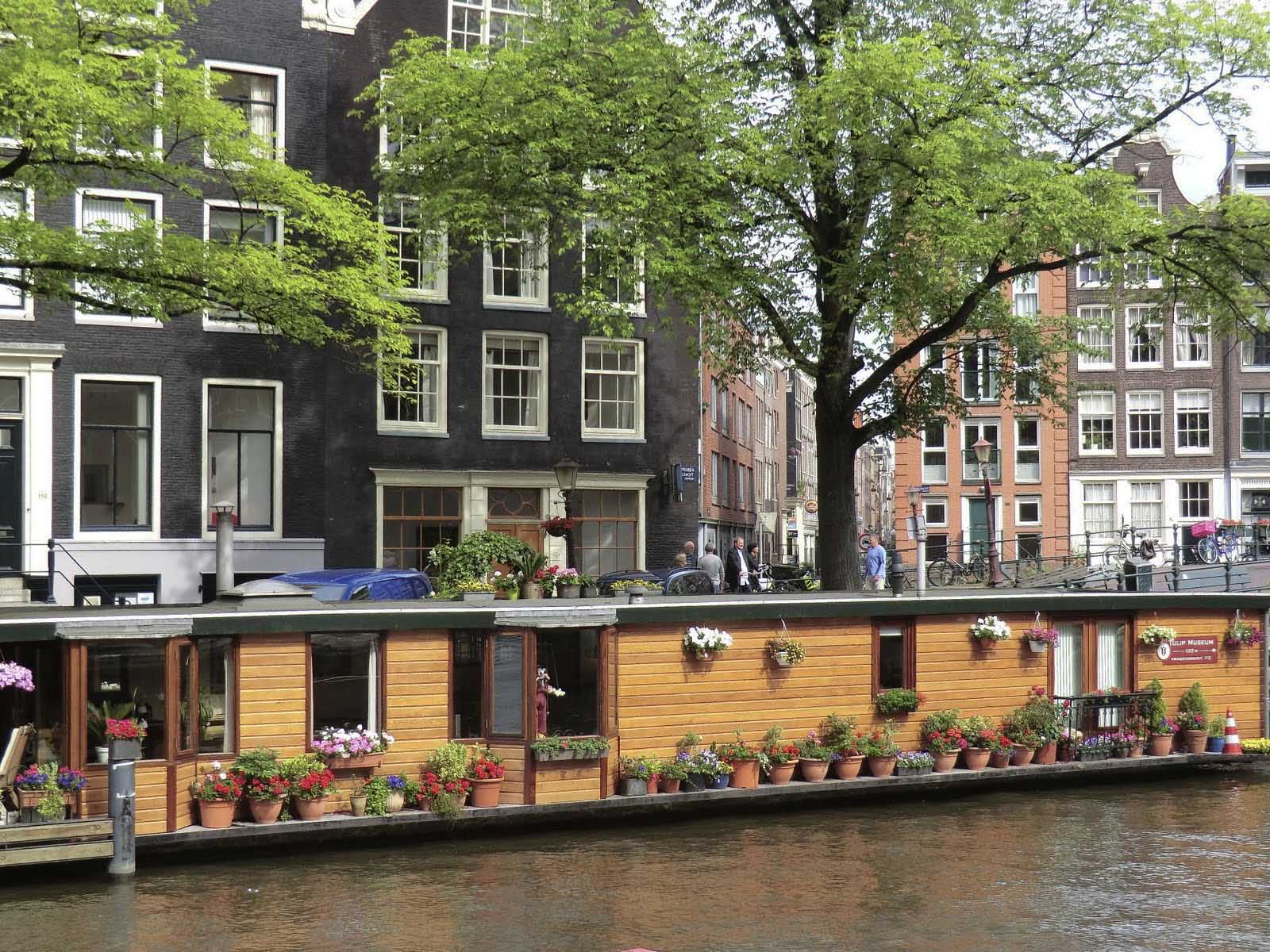 Not without reason Amsterdam is often referred to as the freest city in the world.

In 2001, Amsterdam was the first city in the world where same-sex marriages were officially allowed.

In 2000, the authorities legalized prostitution: the lady of love has its own trade union, social package and pay taxes. 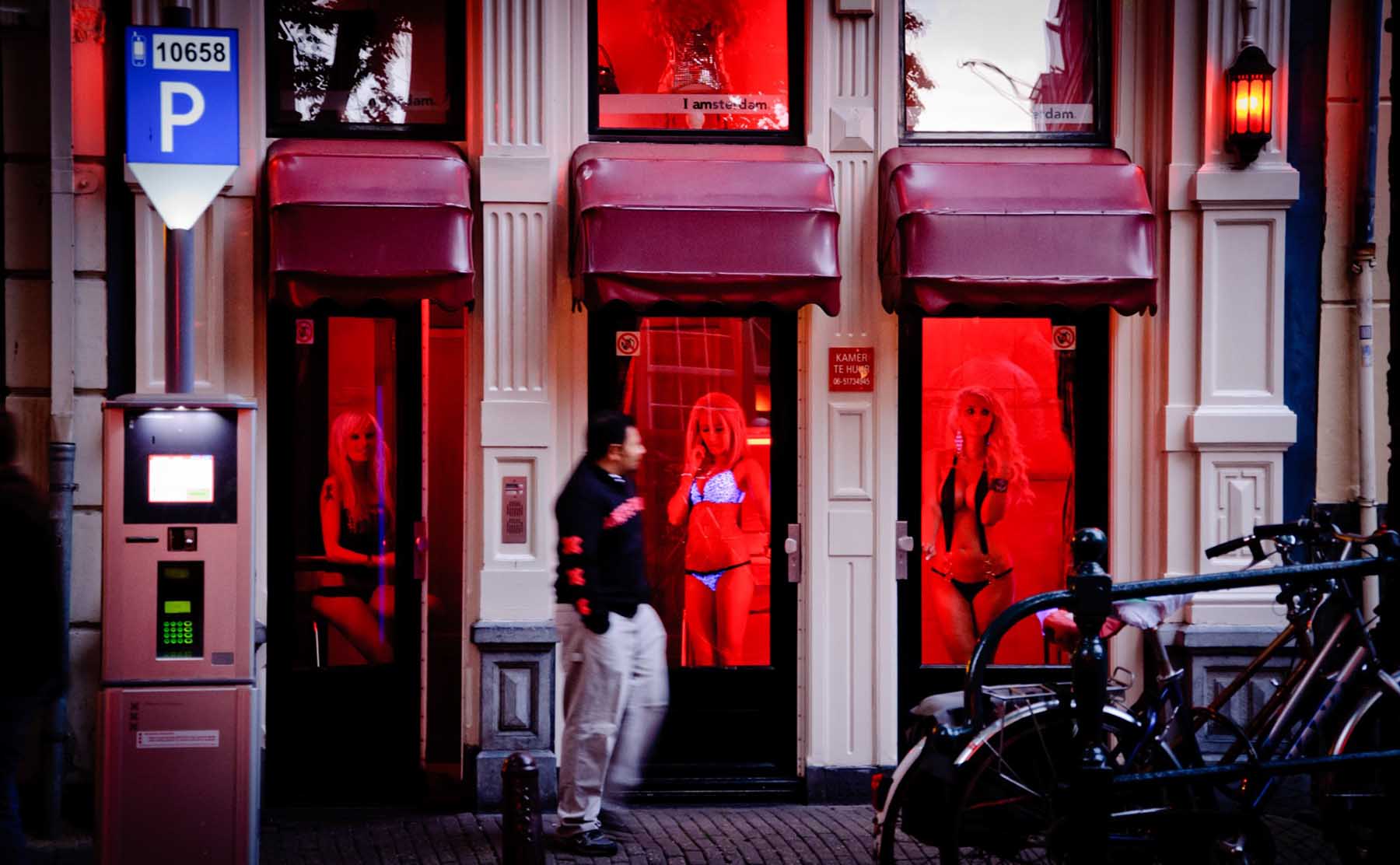 It was Amsterdam that popularized the gay parades. They have been held there since 1996 and are considered to be the main event for people with non-traditional sexual orientation in Europe. 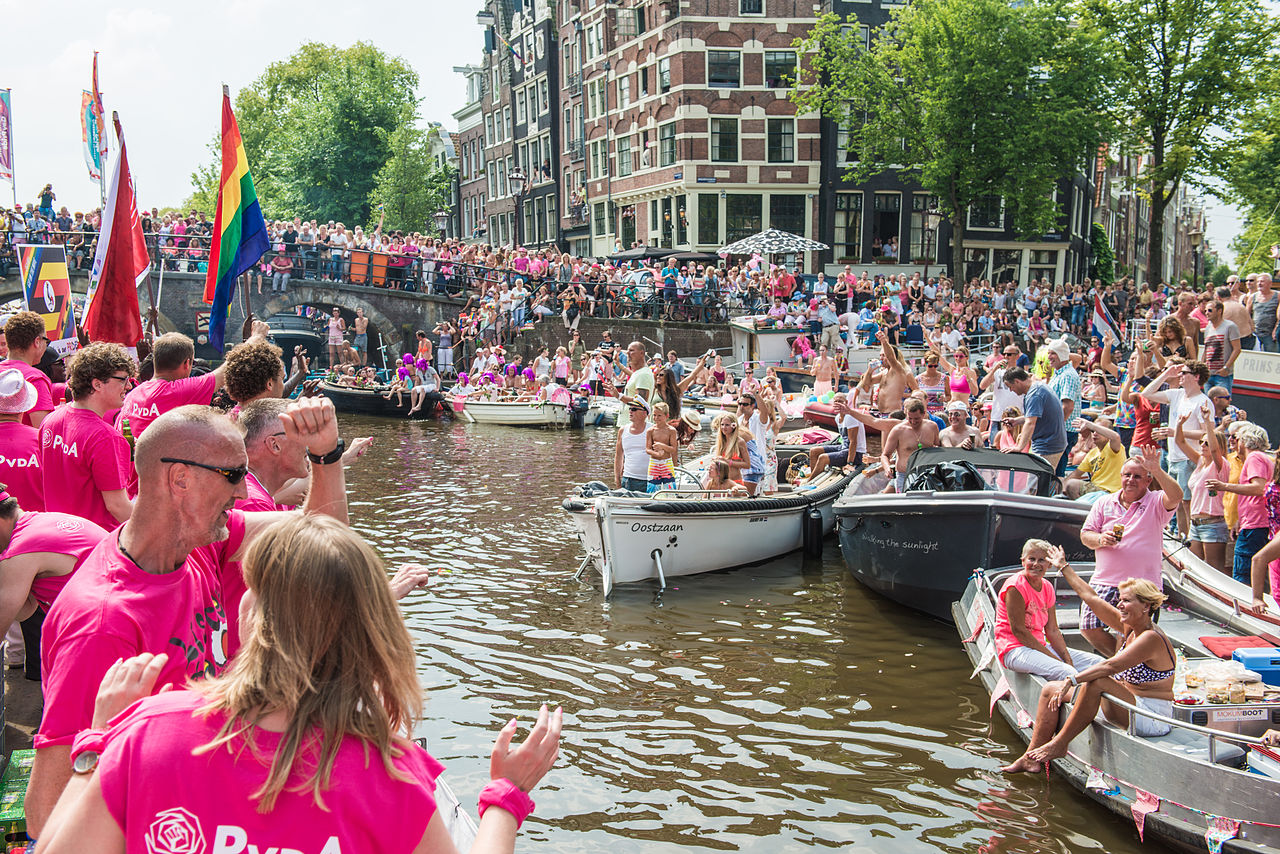 The main principle of the Dutch drug policy is that drug use is a public health issue and is not a crime. A strict distinction is made between light drugs (marijuana, hashish, mushrooms) and hard drugs. Only light drugs are legalized. You can buy (up to 5 grams per person) and consume them only in specialized institutions – coffeeshops. It is officially prohibited to do it on the street (but for many people this is not an obstacle:)) 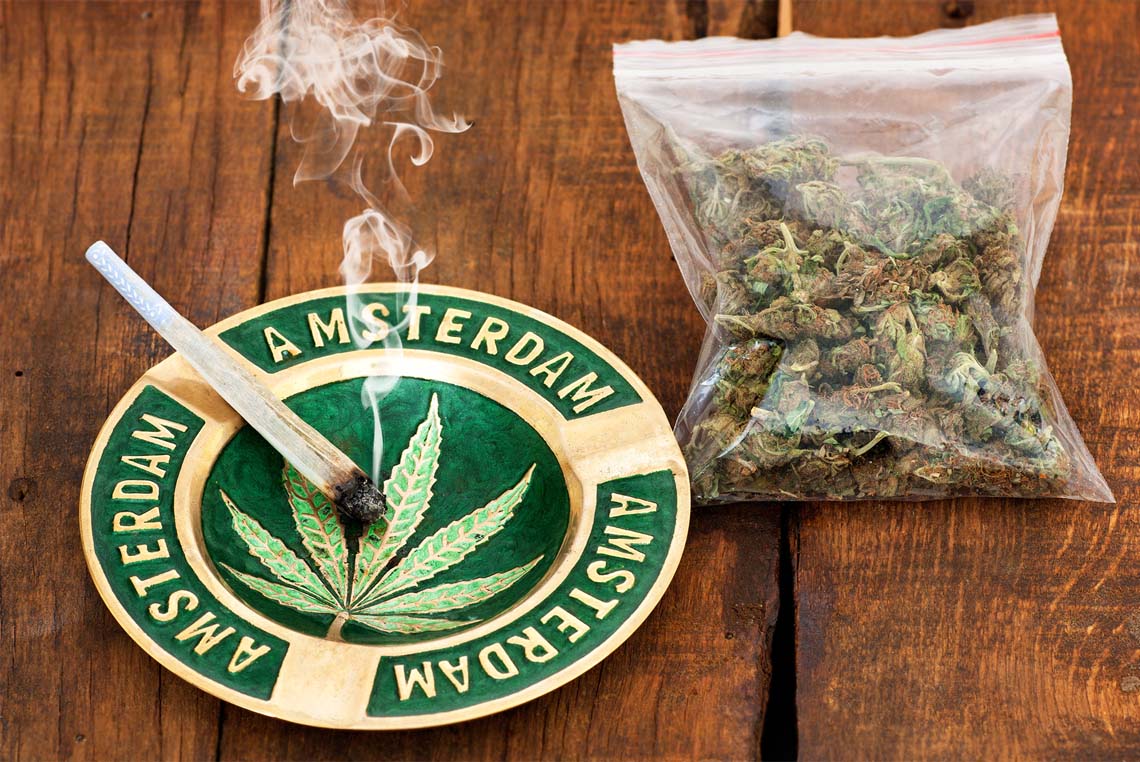 The openness and freedom of the residents of Amsterdam can be characterized by another interesting fact: it is not customary to cover up quite big windows of houses through which you can safely see the entire room. At the same time, peeping through them is considered indecent.

Despite the lack of such serious restrictive measures, as mentioned above, Amsterdam is considered one of the safest cities in Europe. At the same time in the city there are more than 150 nationalities. The people here are really friendly and calm.

The only thing to be afraid of is petty pickpocketing, which runs rampant in any major tourist center and large crowds of people. 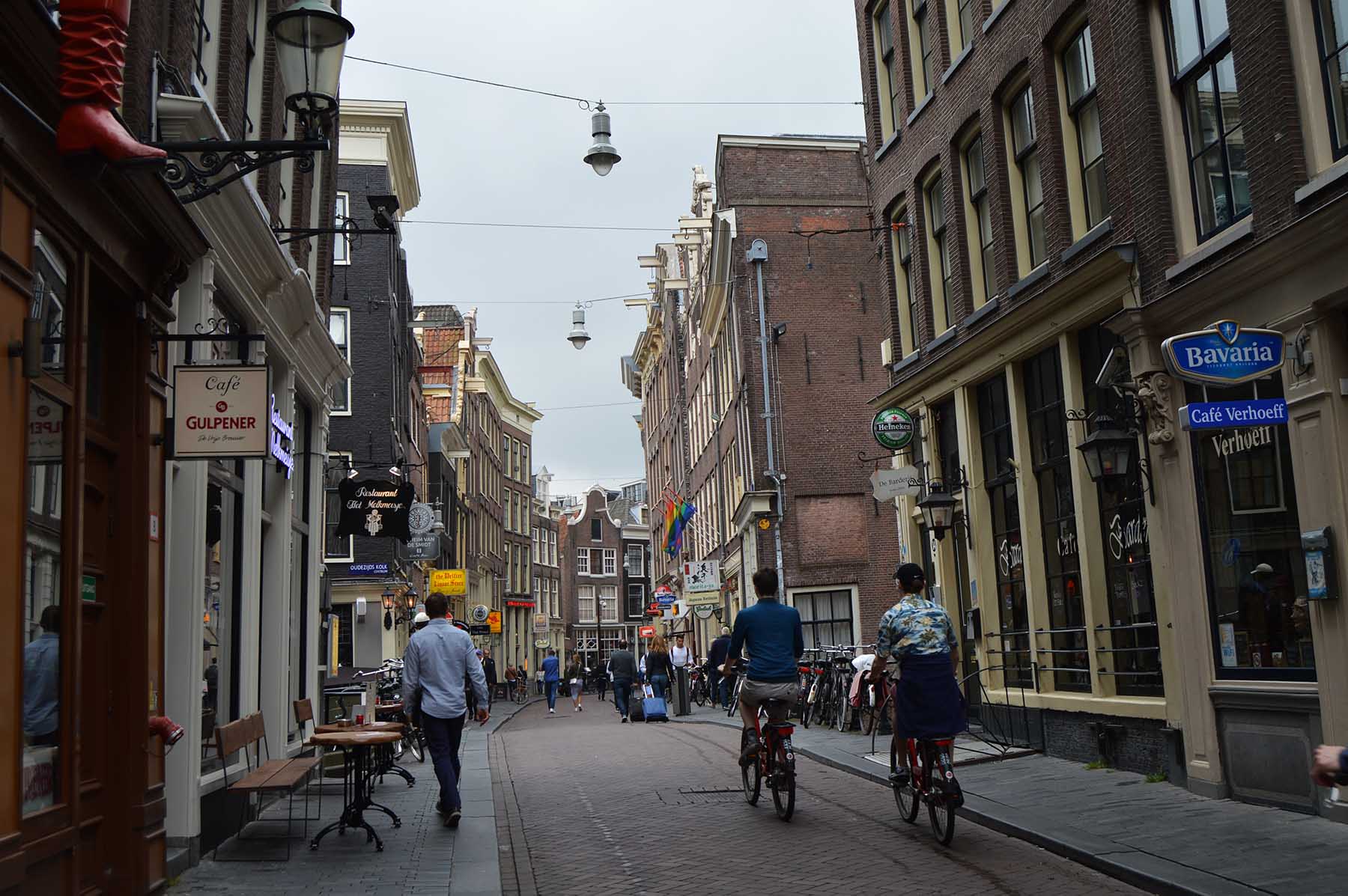 Amsterdam is called the bicycle capital of Europe. Bicycles are the most popular way to get around. Almost every resident of Amsterdam (and there are over 800,000 people!) has a bike, some have two, and many tourists even rent them. Every day about 400 thousand cyclists take to the streets of Amsterdam! There are bike lanes all over the city.

READ
How to feel the charm of old Lviv, Ukraine 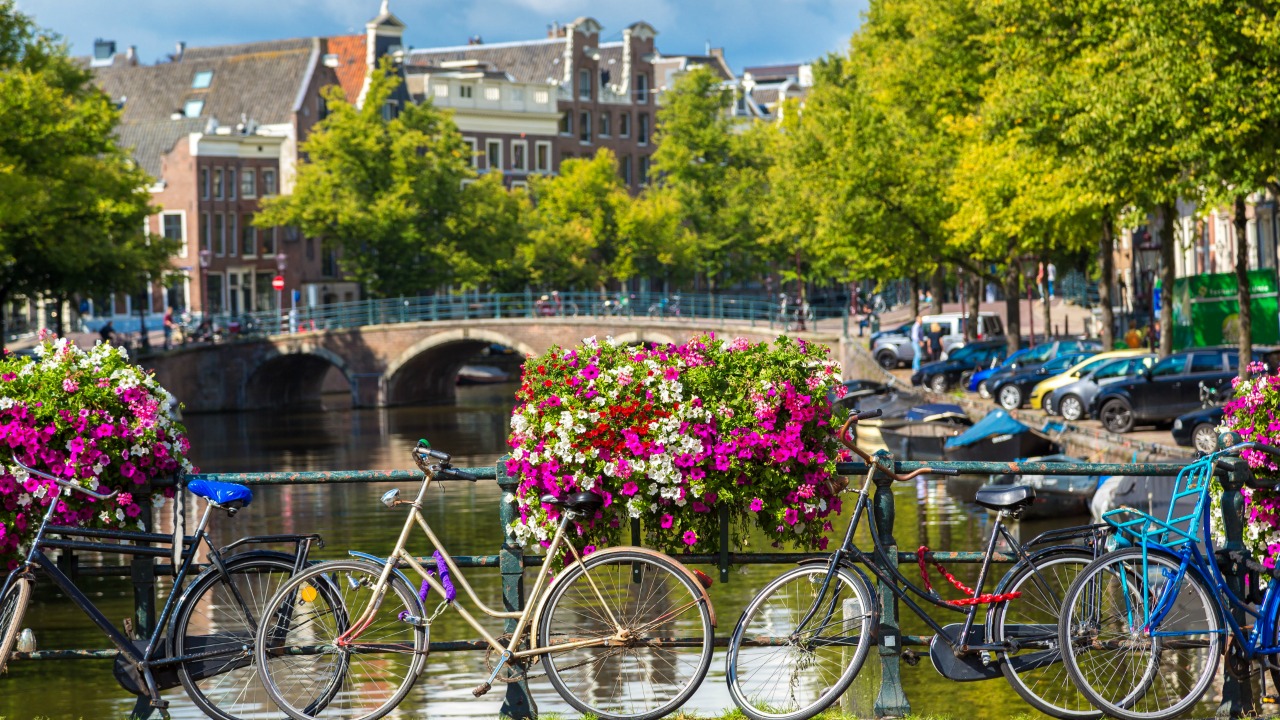 Amsterdam has a rather unusual tradition of throwing your bicycle directly. into the canal! There is an opinion that in this way residents simply evade fees for recycling. Anyway, every year a special canal cleaning service fishes out about 15,000 bicycles!

As a popular Amsterdam joke goes, “the city canals are 3 meters deep: a meter of silt, a meter of bicycles and a meter of water”:) 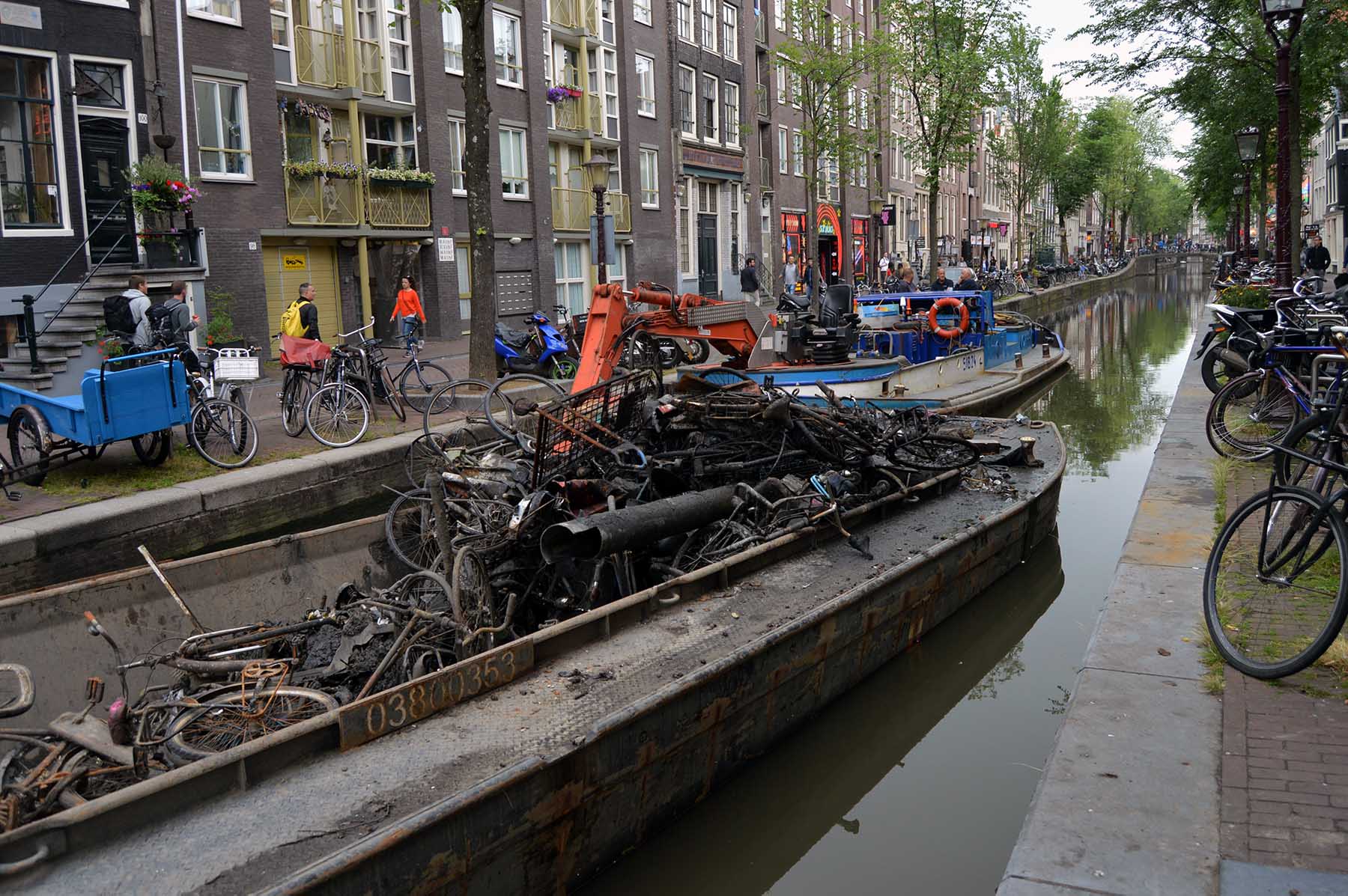 Amsterdam has earned the title “Venice of the North” for the sheer number of canals, bridges and islands. However, it is worth noting that Amsterdam is not inferior to Venice in the number of canals: according to various data in both cities there are from 150 to 170 canals. But by the number of bridges Amsterdam exceeds Venice by nearly 4 times: 400 against 1500! So it would be more correct to call Venice the “Southern Amsterdam”:) 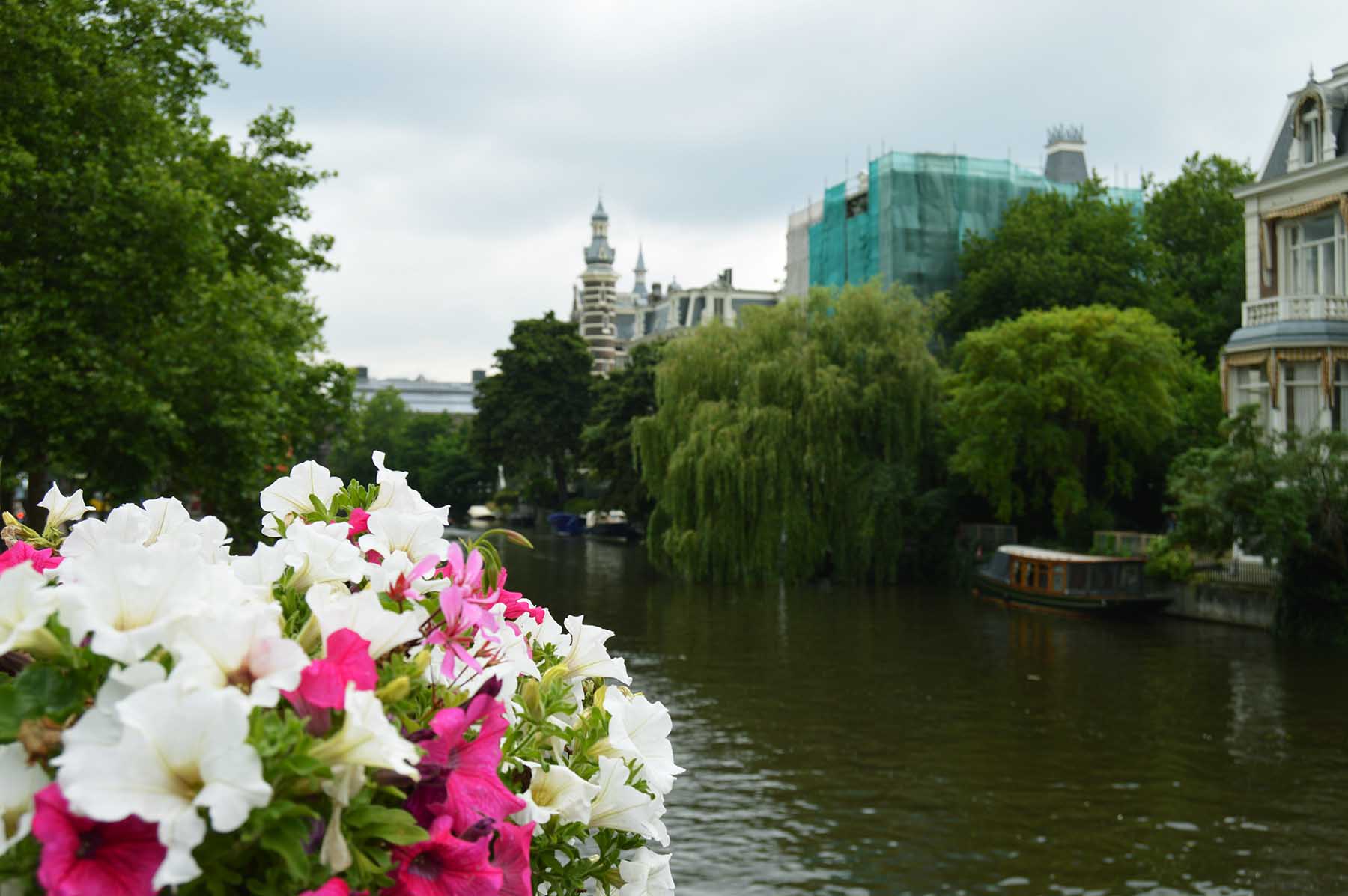 Imagine, one of the largest cities in the world, New York, could have been called New Amsterdam (New Amsterdam). or rather, it was until 1664. In those days, these lands were a Dutch colony and were called New Netherlands, but later were conquered by the British and the city was renamed in the familiar to us New York (York is a city in England).

Netherlands – the land of mills. Several old mills have survived on the territory of Amsterdam. Under one of them, for example, is a bar-brewery Brouwerij’T IJ. Read more about it and other mills here. 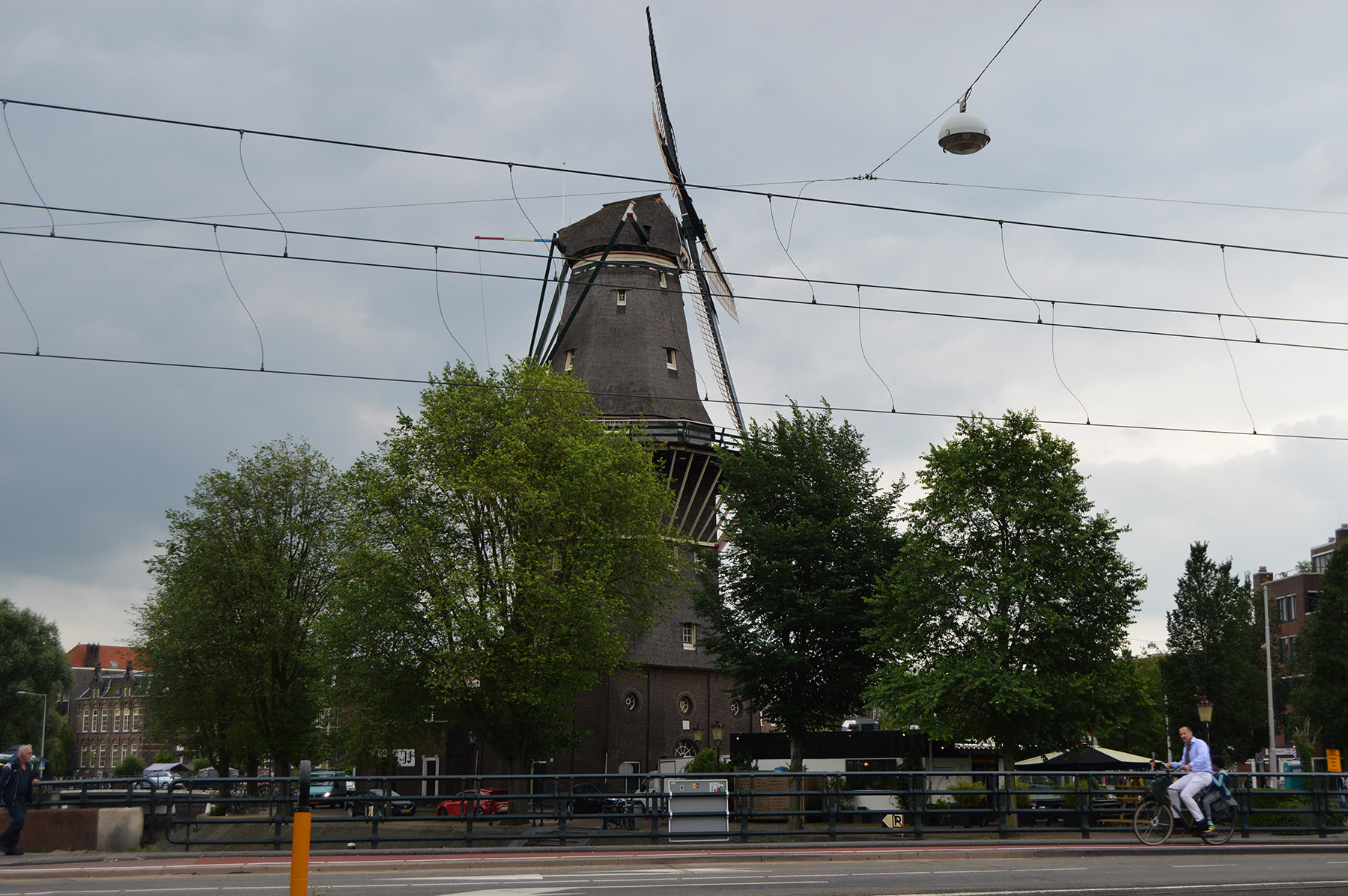