Located on the mountainside, the town is one of the most popular summer vacation spots in Sicily. Let’s face it: Taormina is quite expensive and crowded, but it’s still worth a visit, if only to see its ancient Greek theater, mingle with the locals, and admire the stunning scenery.

The city was founded in the 4th century BC and reached its peak under the reign of King Gelon II of Greece. Under the Romans Taormina continued to grow and develop, and then in 1087 the Normans came here and the whole region was consigned to oblivion. The process of “reincarnation” of the city as a popular tourist destination goes back to the 17th century, when the Grand Tours became fashionable among northern Europeans. A great admirer of this city was D. H. Lawrence, who lived here from 1920 to 1923.

Taormina gets extremely crowded in July and August and from November to the beginning of Easter, life virtually comes to a standstill. Ideally you should come here in April, May, September or October. If you don’t know what to see in Taormina in the first place, you should start with the ancient theater, because the main architectural object of this town is the majestic building of the II century B.C. situated on a 200 meters high hill. From the southern side of the theater there is a magnificent view of Mount Etna.

It is the second largest ancient Greek theater in Sicily (after Syracuse) and the first in terms of its incredible location. In the summer, concerts and festival events are held here. To avoid the crowds of tourists, it is advisable to visit this place early in the morning. If you want to hide from the crowds of tourists, you should go to the public gardens at Villa Comunale. Created by Englishwoman Florence Trevelyan in the late 19th century, this stunning place is a blooming paradise of tropical plants and exotic flowers surrounding all sorts of quirky structures. There is a playground for the children. When you come to Taormina, you can’t resist the temptation to stroll down this gorgeous pedestrian street dotted with fashionable boutiques. Start your walk at Palazzo Corvaja, built in the 10th century, then head southwest towards Piazza IX Aprile, which offers a breathtaking panoramic view of the city.

Opposite the piazza you’ll see the lovely 17th century church of San Giuseppe. Continue west past the twelfth-century clock tower towards Piazza del Duomo, where there is an ornate Baroque fountain (1635) depicting the symbol of Taormina, a two-legged centaur with a bust of an angel.

Congratulations, you are in Borgo Medievale, the oldest quarter of the city. On the east side of the Piazza del Duomo is the 13th century cathedral. In the fifteenth century, Spanish aristocrats ordered the facade of this building to be reconstructed to conform to Renaissance fashions.

To the north of the Corso, very close to the Hotel El Jebel, is the 14th century palazzo Ciampoli. On the south side (near Porta Catania) you will find Palazzo Duca di Santo Stefano, a 13th century palace once inhabited by the noble Spanish family, the De Spuches. Looking at its Norman Gothic style windows and interesting Arabic accents, you can understand why this ancient building is considered one of the architectural “gems” of Taormina. The short 20-minute climb to the top of Mount Tauro (378 m) is not comparable to conquering the Himalayas, but it is still considered quite steep and the last steps are not easy. The reward is a breathtaking, panoramic view of Taormina’s rooftops, its Greek theater, and its beautiful coastline.

From Via Circonvallazione, signs lead us to the small church of Madonna della Rocca. Founded by Abbot Francesco Raineri in 1640, this church was built inside a grotto. According to legend, a young shepherd once took refuge here during a sudden storm and the Virgin Mary appeared to him in this spot with the baby Jesus.

READ
The Great Barrier Reef, Australia is a must-see

The view from the church terrace is truly divine, overlooking Taormina and the deep blue Ionian Sea. Climbing up the mountain, you’ll come across the ruins of the Saracen castle, once built on the site of an ancient Greek acropolis. You will not be allowed to enter the castle itself – there is a lock on its gate, but you will have something to see from this altitude. If you want to enjoy stunning views of the coast and Mount Etna, head to this lovely hilltop village with the ruins of an old castle. If you’re in good shape, you could try walking up here (it takes about an hour) – it would be a good workout for your legs, plus you’ll have time to enjoy the stunning panoramas.

Alternatively take the Interbus bus which runs every hour (round trip for about € 1.90/ 3; travel time 15 minutes).

Once there, be sure to stop by the four-story local bar with a rather interesting decoration called “Bar Turrisi”, where you can taste amazing almond wine.

Sanctuary of the Madonna della Rocca Sanctuary of the Madonna della Rocca.

This small church, built literally inside Mount Tauro, was founded by Abbot Francesco Raineri around 1640. According to legend, a young shepherd once took refuge here during a sudden storm and in this grotto the Virgin Mary appeared to him with the child Jesus.

The panorama from the church terrace is truly divine, overlooking Taormina and the deep blue Ionian Sea. This is the closest beach to Taormina, right under the town. It is full of all kinds of bars and restaurants, and private individuals charge for the use of umbrellas and sun loungers (usually about 10 euros per person per day). To get to Mazzaro, take the cable car from Taormina. Just southwest of Mazzaro Beach is the tiny Isola Bella Island, a beautiful nature preserve located in a picturesque cove with fishing boats. It was once home to the famous Englishwoman Florence Trevelyan, the same one who built Villa Communale. You can reach the island on foot through a narrow strip of sand (don’t forget to take off your shoes). The picturesque church of San Giuseppe, standing near Piazza IX Aprile was inaugurated at the beginning of the 18th century. The central portal is finished in noble marble, while those on the sides are made of local stone. The single-nave interior of the church is decorated by a whimsical painting in rococo style with floral motifs and cherubs. This 13th-century palace, located just behind Corso Umberto near the Porta Catania gate, was once the home of a noble Spanish family, the De Spuches. The windows in Norman Gothic style and the distinctive Arab motifs of the facade make this palace very special. At the top of Mount Tauro you can find the ruins of Saracen Castle, built between the 11th and 12th centuries. The castle was built on the site of an ancient Greek acropolis. Tourists are not allowed to enter. This twelfth century clock tower, west of the main square Piazza IX Aprile, can be considered the conventional border beyond which begins Borgo Medievale, the oldest quarter of Taormina. Palazzo Ciampoli built in the 14th century stands next to the Hotel El Jebel. When King Ferdinand IV opened this gate in 1808, it was called Porta Ferdinand, but it was later renamed Porta Messina. This distant event is commemorated on a plaque above the gate arch.

Taormina is a charming town on the slope of the east coast of Sicily, Italy. It is one of the main tourist resorts of the island. Although Taormina may seem hot and busy during July and August, crowded with Italian tourists, it is much more pleasant and less busy the rest of the year. To navigate tour prices to Taormina, click here.

Many tourists stay in the nearby beach resorts of Giardini-Naxos (Taormina is further down the coastline, about 3 km to the south) and Letoianni about 5 km to the north. I usually look for hotels on booking, and you can compare prices from different sites here. Explore private apartment and cottage rentals in and around Taormina, for example, here.

Look for flights to Catania (for example here). There you can rent a car to reach Taormina. You can check prices and rental rates in advance here.

Alternatively, in order to avoid any inconveniences upon arrival you can book a private transfer online in advance. There are companies that offer this service from Catania Airport. For example: “123Transfers offers from Catania Fontanarossa Airport to Taormina a Mercedes E-Class for €86.62 and a minivan for €100.50.”

Regular trains from Messina and Catania. However, Taormina-Giardini station itself is located by the sea, two kilometers below the center. There are several buses to Taormina (cost about 1.70 euros), but it is more convenient to take an intercity bus from the center and directly to your destination. The walk from the station is of course picturesque, but very tiring. Regular buses run between Messina and Catania. An express bus ticket from Catania bus station costs about 3.70 euros. From Catania airport to Taormina bus station in Via Luigi Pirandello is 7.90 euros per person. A cab to the center of Taormina, going uphill, is approximately 10.00 euros. Main attractions. What to see

Teatro Greco – An impressive open-air theater (mostly Roman) with great views up and down the coast and across Mount Etna. The entrance fee is 8 euros.

Castelmola is a village located on a hill 5 km above Taormina, with stunning views. Several buses go up (you can walk if you have time). Walk back down the road, past the Madonna on the left and the parking lot on the right. Move to the far end of the parking lot and exit onto the brick road. Further down where the bricks end, cross the road. Look for crosswalks on the road. On a hot day, take plenty of water with you. 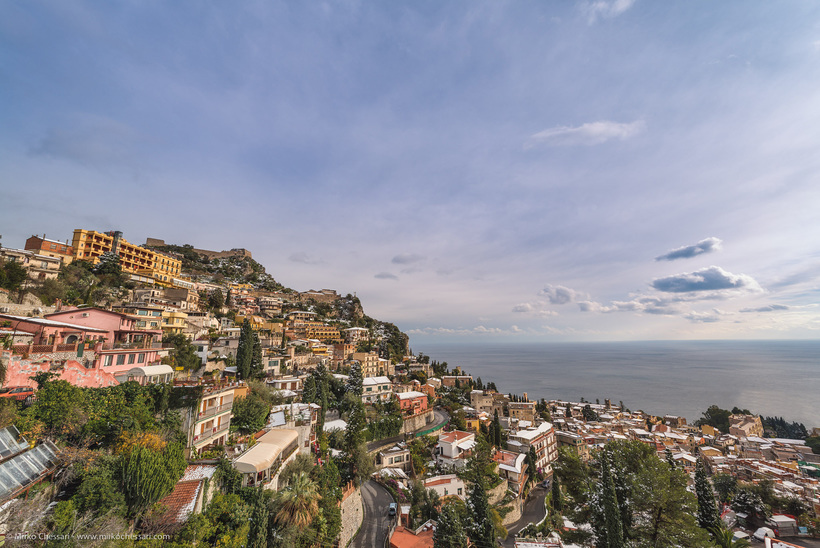 Many agencies offer day trips to Mount Etna. You will be allowed to walk all the way to the top if you have a guide. It also depends on the state of volcanic activity. But the lava flows are really impressive. The altitude is over 3,000 m maximum, so wear warm clothes: it can be cold even in summer, and the peaks are often covered with clouds.

Novara di Sicilia is located in the Provence region of Messina on the north side of Mount Etna. It is a picturesque medieval town set in the mountains overlooking the ancient Tyndaris and Abacaenum. It is the archetype of a typical medieval town with friendly and helpful people who speak a special dialect.