Best caves to visit in the US

Exploring the underworld has always attracted intrepid adventurers. Hiking the land is one thing, but squeezing, climbing and crawling through mysterious caves provides an adrenaline rush unlike where the sun shines. 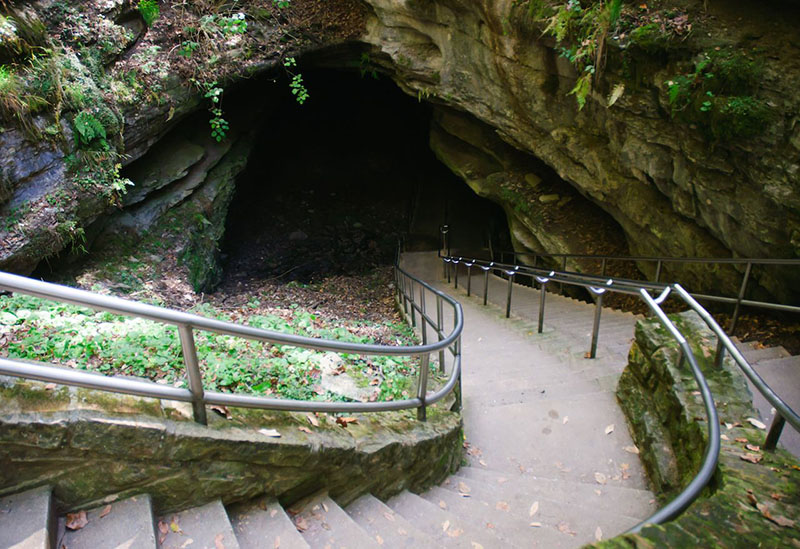 Mammoth Cave is the Flint Ridge Cave System and is the largest known cave system in the world, twice the size of the next largest. More than 645 km have been explored so far, but new caves are constantly being discovered. Entering Mammoth Cave is like being transported into an underground fantasy world reminiscent of the movie Journey to the Center of the Earth.

Some of the most famous parts of the cave, such as Frozen Niagara, are illuminated. There are short Niagara tours or longer ones, such as the 6.5-kilometer Grand Adventure tour and the spectacular 8-kilometer Wild Cave tour. If you want to take the route on your own, over 11 km of visitor trails weave around the center. On them, you’ll see spectacular views in the deeper sections, bubbling springs, and spectacular rock formations.

Carlsbad Caverns is known for its spectacular stalactites and stalagmites, as well as a colony of 400,000 Mexican tail bats. Instead of taking an elevator down, hikers can head deep into the caves along a dimly lit trail with steep walkways. At the end of the trail, a limestone cave known as the “Big Room,” the largest underground chamber in the world, awaits you. 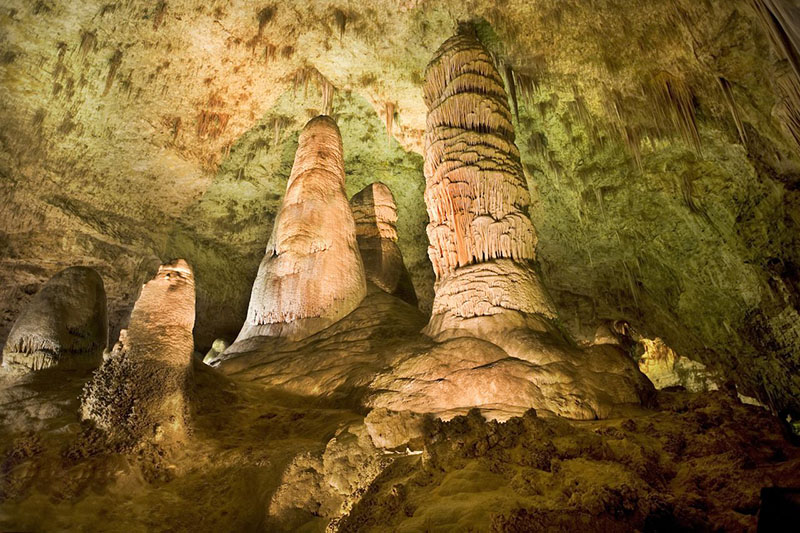 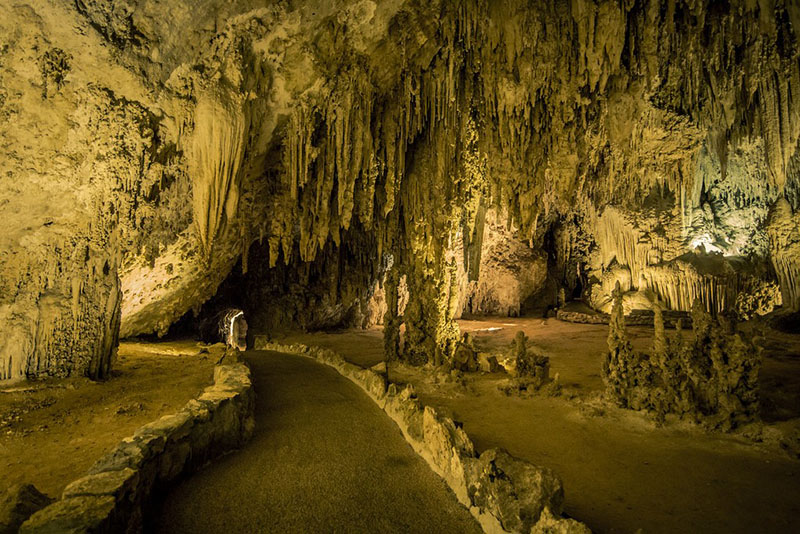 The strange and surprising rock formations are nothing short of astonishing. If it’s dusk outside, you can see bats leaving the caves to hunt for insects. It’s just as unusual a sight as the caves below.

The National Park gets its name “Wind Cave” from the sound of wind rushing in and out of a natural cave mouth. A sacred Native American site, the park has 235 kilometers of explored passageways, making it one of the longest and most challenging in the world. It is believed to have the greatest number of passages per square kilometer of any cave. 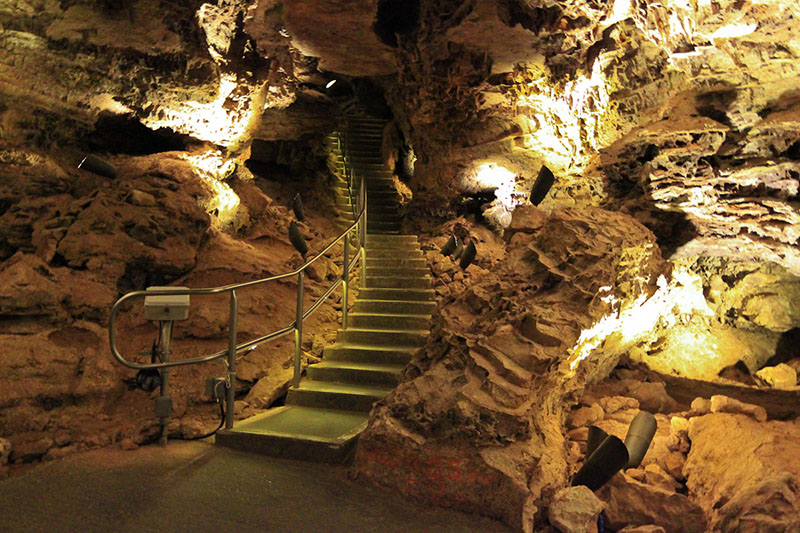 One of the main features is an unusual mineral formation in the form of a box-like masonry of calcite resembling a honeycomb. It is icy and looks like paper snowflakes, but only made of mineral deposits. You can take different tours depending on your level of ability (physical and financial). 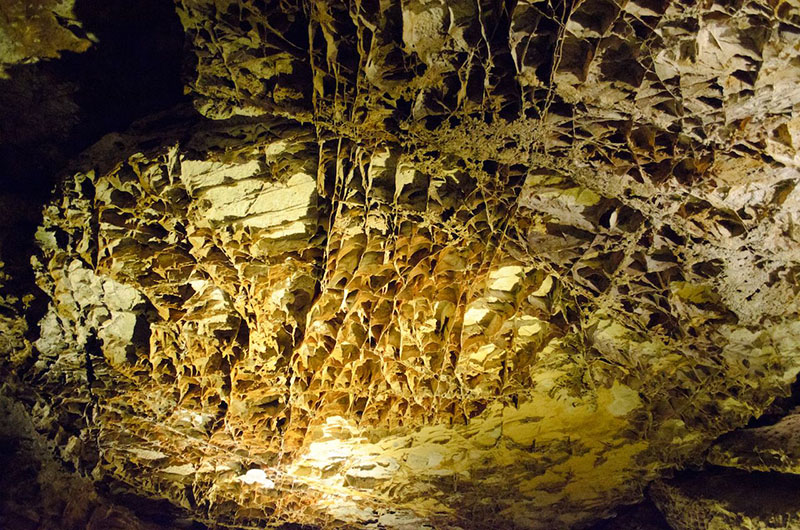 Hiking the longest continuous lava tube in the United States is not a trip for the faint of heart. There are two caves in Monkey Cave: the upper cave is the most difficult as well as the most interesting. Speleologists should be sure to wear gloves to protect themselves from the uneven rocks. 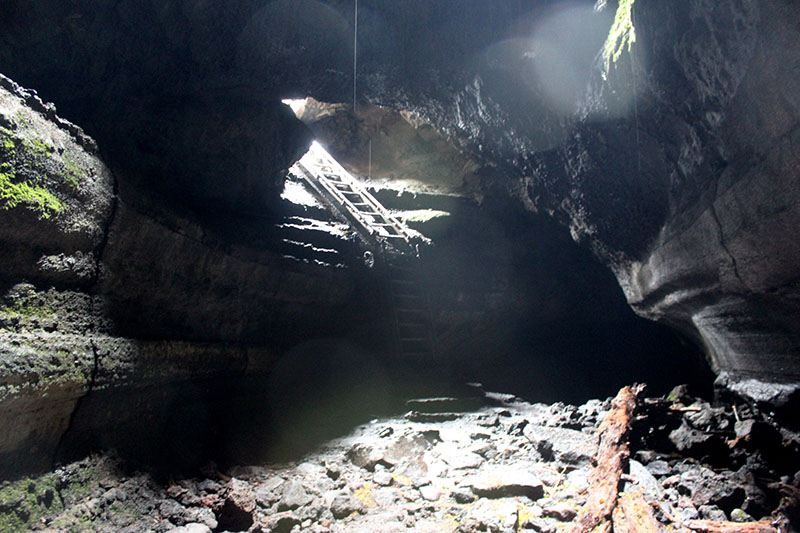 The geology within the upper cave changes everywhere. Climbing the mountain piles and descending 2.5 meters in depth on slings (available, you don’t have to take your own) is part of the Monkey Cave journey. The cave is named after observations of Bigfoot (Bigfoot or Sasquatch) in the nearby Mount St. Helens area.

Formed after a volcanic eruption (when the outer flow had cooled and the rushing lava kept advancing), the mile-long passage through Lava River Cave is an ideal adventure for beginners. 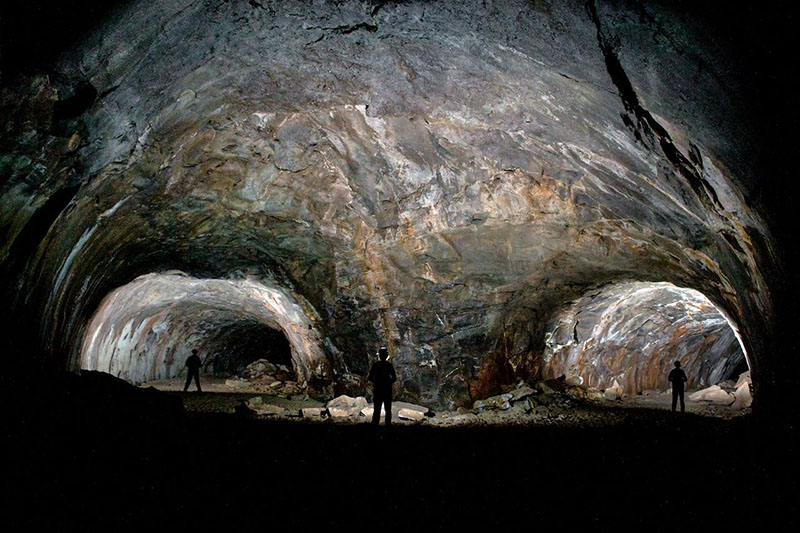 The cave’s height of 9 meters in some places and 1 meter in others makes it difficult to pass in some sections, but increases the excitement of the adventure. “Lavacicles” hang from the ceiling, and rare rays of light enter through small holes. You can see the geological effect of lava flowing through a tunnel in a smooth rock arch.

Balcony Cave is a cave of collapse. This means that it was created by boulders falling into the canyon, not by lava flow. Over time, earthquakes and erosion created the cave roof. Several trails in the park, which vary in length from 4 km to 14.5 km, take you through Balcony Cave and out the other side. Although not as grand as some of the other caves on this list, Balcony Cave is fun precisely because the entrance (or exit, depending on which side you come in) requires you to climb huge boulders in the dark. You really can’t do it without a flashlight or headlamp. 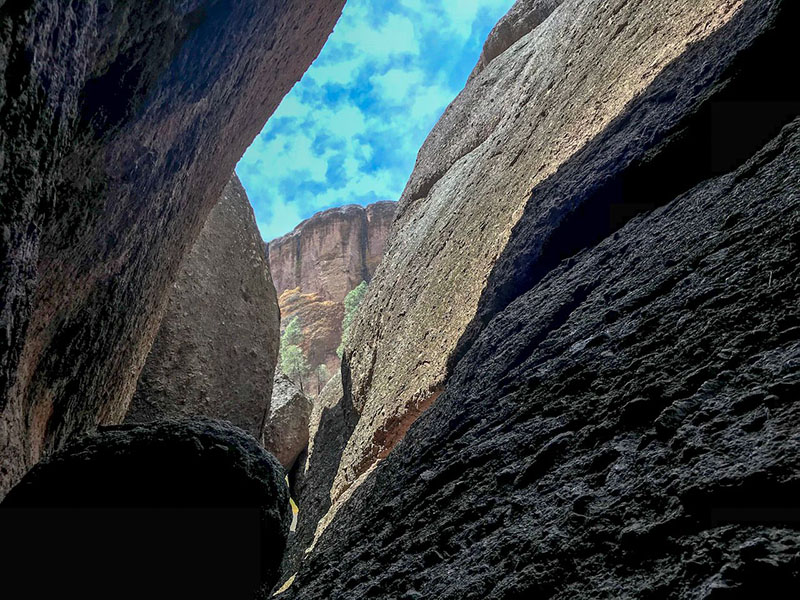 If you prefer a cave that is easier to get into, Bear Gorge Cave is also a collapse cave, but has ladders and railings set into the rocks, making it easier to get through. Inside it is difficult to pass because you will be wading over boulders like balconies that are wet in the winter. But in late summer, the trip will be cool and a welcome break from the heat. Both caves close between mid-May and mid-July to prepare for the nesting of Townsend’s ushers (smooth-nosed bats). 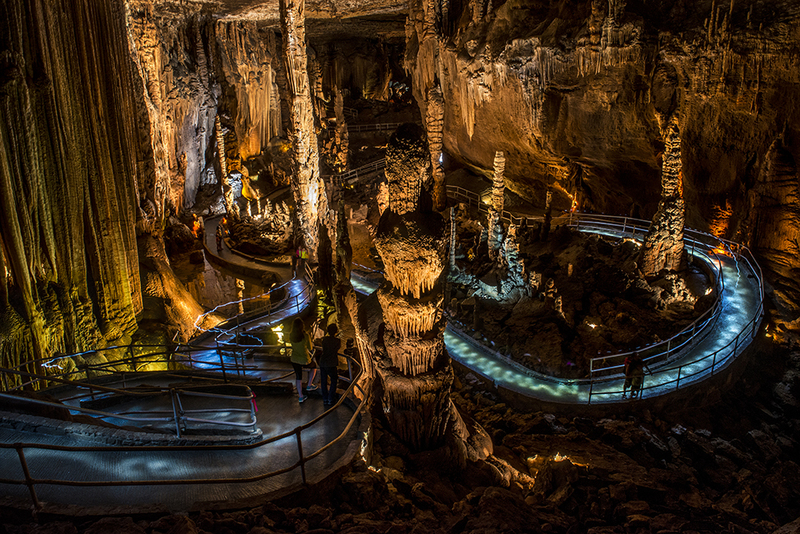 Although the Dripstone tour is simple, it is impressive. You’ll walk through two huge caves with an array of glistening crystal formations, columns, ceiling stones, and over a natural bridge, with the walls accented by illumination. The Discovery Tour is more challenging: you must descend into the depths to follow the cave flow to the natural entrance that was discovered by the original explorers.

READ
The city of Matera - a place for seclusion in Italy 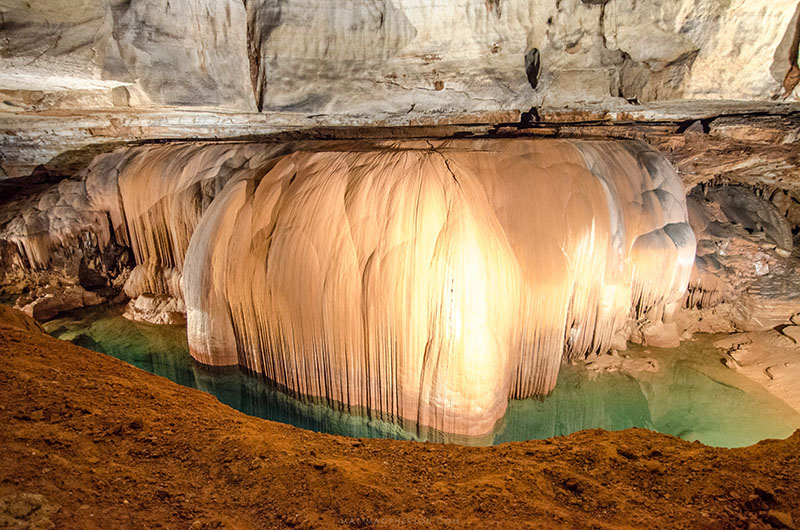 Although many caves in the southeast are closed to protect bat populations from white-nose syndrome, the Blanchard caves always remain open to the public.

The 12 most amazing caves in the world

Caves allure people with their mystery. They are associated with ancient history and adventure. Created by nature itself, they impress with their variety of forms and scenic beauty. From delightful grottoes with turquoise water to stone walls decorated with thousands of fireflies, from mountain caves to dungeons in the middle of the jungle, these stunning places are worth visiting.

When you enter a cave, it feels like you’re in an adventure movie. But you don’t have to be a daring adventurer to discover the most beautiful caves in the world.

Here are the most amazing places you can see and visit as a regular tourist.

The Benagil Caves in the Portuguese region of the Algarve never cease to amaze their visitors. They are located near a beautiful beach, and tourists can reach them by small sightseeing boats.

This cave is also called the Blue Grotto. It is located on the island of Bishevo and looks like the illustration of an adventure book. The stunning turquoise color of the water is the result of the reflections of the sunlight, which penetrates through the hole at the top of the grotto. It can only be reached by boat or yacht.

There are 119 stunning caves in Carlsbad National Park in New Mexico. The most interesting among them is called the Great Room, which is the largest cave chamber in North America.

The caves in Vatnajeküdl National Park are inside a glacier, which creates a truly stunning view. Although they are a major attraction on standard hiking trails, they are well worth a visit

READ
Top 10 most amazing living history museums in the U.S.

They are a 20-minute drive from Kuala Lumpur in the bowels of a limestone hill in the Selangor region. The cave complex consists of three main chambers and several smaller ones. To get to this attraction, you have to traverse 272 colorful steps.

Stunning rectangular stone columns formed millions of years ago by volcanic eruptions. The cave is located on Staffa Island in the National Nature Reserve.

This huge limestone grotto has a hole in the ceiling and is densely filled with green trees. Inside the cave is the famous Buddhist temple of Kuha Karuhas. The attraction is 400 meters from Sala Beach.

The place, which has become a home for thousands of bats, is striking and frightening at the same time. With the onset of darkness from the bowels of the cave fly out whole swarms of its inhabitants.

The cave of limestone and ice is located in Werfen. It is considered the largest ice grotto in the world. The existence of this amazing place became known only at the end of the 19th century. The stunning rock and ice formations make the cave a must-see on the list of natural wonders to see.

The place, which is on the edge of the North Island, has become world-famous for its unusual inhabitants. The walls of the caves are dotted with millions of fireflies that shimmer in different colors and create a truly magical view.

The sea cave in Capri is one of the main attractions of the island. It mesmerizes with crystal clear blue water with silver reflections. You can get inside the grotto only in a small wooden boat, because the entrance is very narrow.

READ
Armenia: a country that saw and survived the Deluge

The cave, which is 200 meters high and 150 meters wide, stretches for 5 kilometers. It is considered the largest in the world by volume. Inside it, a river flows and jungle grows.

The untamed caves are stunning in their beauty and prove that nature is the best artist and architect. These places are worthy of going to them, overcoming thousands of kilometers. Emotions and impressions that you get here will be one of the most vivid in life and will remain forever in memory.