South Africa is not the most popular destination for travelers from Russia and the CIS. And not for nothing! It is a country at the center of the world that combines European comfort and African exoticism. A trip there will become an adventure that you will remember for a lifetime. We highly recommend to visit it at least once in your life. And so the recommendation wasn’t unfounded, here are 10 reasons to love South Africa.

Yes, we are not going to be original here, but the nature is one of the main reasons to love South Africa. The landscapes there are so unfamiliar to our eyes that they seem cosmic. Steep cliffs, two oceans – the Indian and Atlantic, huge green meadows An additional advantage: a huge number of breathtaking places in South Africa remain in their pristine form.

South Africans are very similar to Europeans and Americans in their politeness and friendliness. This is especially evident in Cape Town, where every passerby will smile at you, and every grocery store will definitely ask how you are doing and wish you a good day.

Have you ever seen penguins in their natural habitat? You don’t have to go to Antarctica for that! In fact, you can see Cape penguins in South Africa. They live on the coast of the Atlantic Ocean, in the town of Simons Town in Boulder’s Beach. They’re funny, cute and very pampered – of course, because they’re the main local celebrities 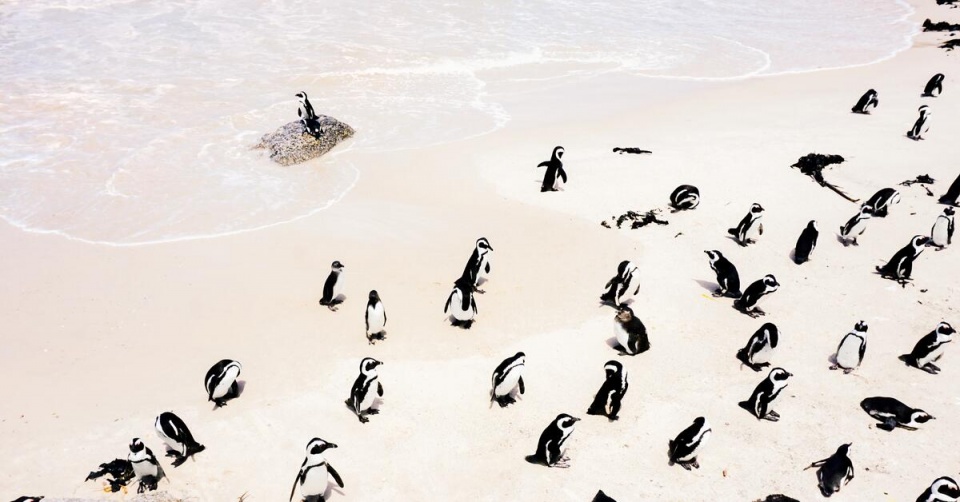 There are so many farms in the country that produce the highest quality organic food. At the same time, their prices, even in good restaurants, are extremely low. For example, a dinner at a good meat restaurant for two with wine will cost you about 50 USD. And wine is a separate story.

South Africa is one of the leading wine-producing countries in the New World. The country is the 8th largest producer of wine and its products are exported to 50 countries around the world. About 900 million liters of wine are produced each year, of which only a small portion is exported. We understand the South Africans very well: no one wants to give away such wine. During your trip to South Africa you have a chance to visit numerous wineries and, of course, taste the best wines.

Here’s a secret: blue whales come to the South African coast. Seeing them in the wild is an extraordinary opportunity that many travelers hunt for years. If they knew you could see whales in South Africa just sitting on the beach, they’d be very surprised. But you’re not, because now you know the secret!

The mix of European and African culture had an extraordinary result – the architecture of South Africa resembles our favorite European capitals and reminds nothing at all at the same time and fascinates with its uniqueness. Particularly beautiful Cape Town, which is the famous colorful quarter Bo-Kap. Colorful houses were built in the 1750s by natives of the former Dutch colonies in Sri Lanka, Malaysia, Indonesia, India and other countries. A treasure for anyone who wants to post a photo on social media for a million likes 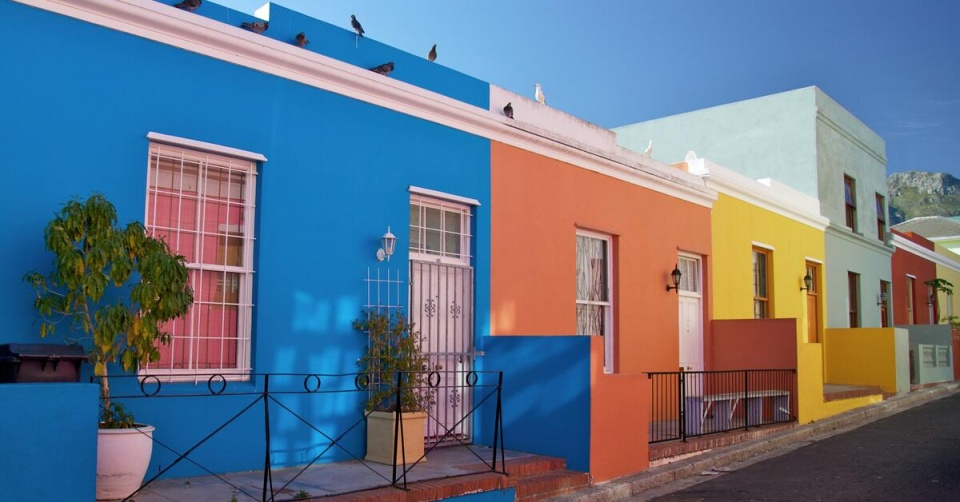 South Africa is in the southern hemisphere, so summer is from December to February. This makes the country an ideal destination for an escape from the harsh Russian winter – from -30 to +30. Winter, which in South Africa comes from June to August, is also very comfortable – the temperature does not fall below +7 ° C. In the off-season, the weather is not much different from summer, so don’t forget to bring a bathing suit! 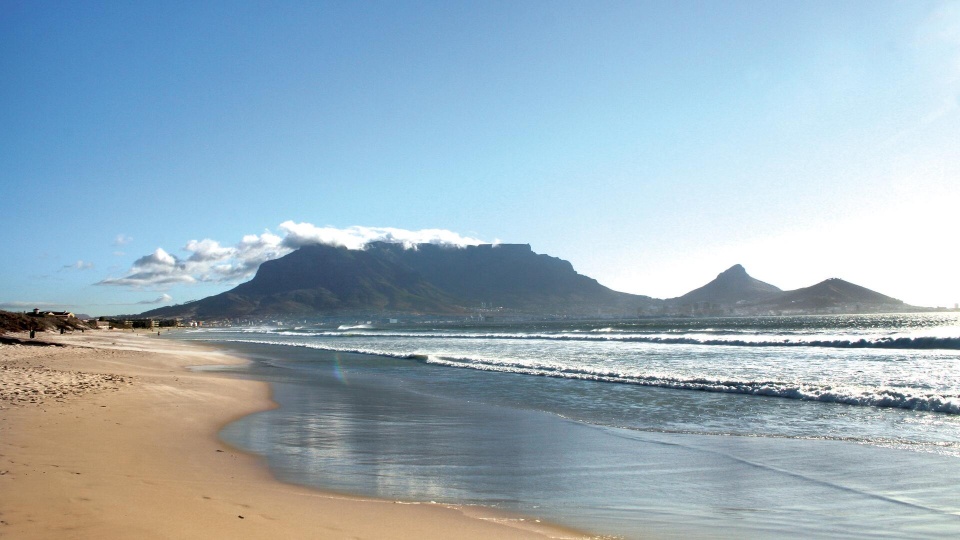 English is the main language in South Africa. Everyone speaks it fluently in the big cities and with an almost British accent – very clear, understandable and literate. Learning English in South Africa guarantees immersion in the language from day one, which is very important for rapid progress.

Surfing, windsurfing, kitesurfing, diving, mountaineering, rock climbing, trekking and many more sports are very developed in South Africa. If you like adrenaline, you are definitely there.

Here are 10 reasons to love South Africa. We’re crazy about this country and we’re sure that you’ll fall in love with it too. Travel, fall in love with countries and cities and discover the world – it’s always worth it.

Articles about learning languages, living and studying abroad. Send one email per month. Subscribe to Newsletter

Perhaps it’s safe to say that this is the main purpose of a trip to South Africa. About two dozen national parks and reserves give you a unique opportunity to see not only the big five, but all the richness and diversity of the fauna of the African savannah.

The oldest and most famous is Kruger Park, which was established back in 1884. It is a true paradise for lovers of wildlife watching with excellent infrastructure and a large number of accommodation facilities of different categories. The Pilanesberg National Park, Kariega Nature Reserve, the Kalahari Desert – everywhere you are guaranteed unforgettable emotions and stunning photos of the animal life.

Are you a thrill-seeker, or do you want to spice up your life a bit and add some excitement to it? Then South Africa is the place for you. Shark diving, paragliding over Cape Town, diving, windsurfing and bluecarving, hot air ballooning over the savannah, horseback riding in the Dragon Mountains, hiking safaris – you can find it all in South Africa.

Although the falls are not in South Africa but on the border of Zambia and Zimbabwe, you can easily access them from South Africa which is one of the most beautiful waterfalls on the planet.

Agree, not in any country, you can come to the beach and see penguins, but in South Africa it is possible. There is a colony (about 3,000 penguins) that live in the Boulder’s Beach area of Cape Town.

In just 30 minutes, you can get from Cape Town to SEAL Island in Falls Bay. These cute creatures will not leave you indifferent.

And of course, an amazing sight – the whales! South Africa is considered one of the best places in the world for whale watching. Approximately from June to December (peak September-November) they come to warm waters to mate. You can watch them from coastal walkways, restaurants, cafes and even from the comfort of your hotel bed or approaching by boat.

Or as it is also called, the sardine race. This global event of the maritime calendar (tentatively from May to July) is really worth seeing. Huge shoals of sardines move north along the coast. And the number of them cannot be counted. Usually the sardines are chased by someone toothy, with a beak or with a camera

South Africa is famous for its wines. A large number of vineyards are located in the immediate vicinity of Cape Town. There are four major wine regions – Stellenbosch, Paarl, Franschhoek and Wellington – just a few hours away from Cape Town. There are about 200 cellars, many wineries and distilleries where you can taste and, of course, buy some fabulous wines.

You can travel by train in South Africa and not only comfortably but also luxury.

The Rovos Rail Train has a capacity of 72 people and is made up of 20 cars. It is a colonial-style train where every detail is thought out; in the gourmet restaurants the chefs never tire of surprising with African and European delicacies; for contemplation of the natural beauties there are special balconies and viewing platforms. In addition to comfortable fixed beds (single and double), the rooms have en-suite bathrooms with showers, and some have full-size tubs.

If you love history, you’ll find many interesting and unique historical sites in South Africa. How far back are you willing to go? Here is the Cradle of Humanity, where the fossil remains of an Australopithecus nicknamed Mrs. Pleasant were found. They are 2.3 million years old. You can touch a period of new history in the province of KwaZulu-Natal, known for its battlefields of the Anglo-Boer War. The modern history of South Africa is perhaps best illustrated during a visit to Robben Island, where Nelson Mandela spent 18 years of his incarceration along with other political prisoners under apartheid.

In addition to the already named Cradle of Humanity and Robben Island, South Africa is home to such UNESCO sites:

The Dragon Mountains amaze with their fabulous topography and scenery: crystal waterfalls, mountain peaks and slopes covered with Bushmen rock paintings. It is also home to South Africa’s highest point.

Richtersveld Park is transnational and is located in South Africa and Namibia. It’s sun-dry mountains and sandy plains, beautiful yet frightening in their scenery.

Mapungubwe National Park is known for its archaeological excavations at the site of the capital of an ancient kingdom.

Cape Floristic Area is a natural ecosystem with a huge number of endemic plants (about 90% of species).

Isimangaliso National Park (old name St. Lucia) is a wetland area, which is under the permanent influence of various coastal currents and storms.

Vredefort crater is the largest impact crater on Earth with a diameter of 250-300 meters. It is over 2 billion years old.

The best city beaches are probably in Cape Town. There’s trendy Camps Bay and Boulder’s Bay with its funny and cute penguins. And along almost the entire coastline you’ll find long stretches of pristine white sand lapped by the waves of the Indian Ocean, which are getting warmer and warmer further north. There are even tropical coral reefs in Rocktail Bay.

READ
30 best places to see in Sochi - descriptions and photos

Durban, Ballito, and the beaches of the KwaZulu-Natal coastline average more than 300 days of sunshine a year. Beautiful weather almost always!

Travel to and around South Africa is comfortable! Many international airlines fly here. The country’s airports were renovated for the 2010 FIFA World Cup and comply with all modern requirements and standards. Also for this event was reconstructed a network of national highways, which runs under the vast sky of the Karoo plateau with its unforgettable scenery, winds among the vineyards, runs along the coastline of the ocean and over the magnificent mountain passages.

South Africa is one of the few African countries where tourists can travel independently by car.

It is a beautiful and picturesque seaside city against the backdrop of the world-famous Table Mountain, the ascent to which is a must on any tourist program. It has beautiful waterfronts and beaches where you can admire the scenery and incredible sunsets, watch whales. Or simply relax in one of the many cafes and restaurants, enjoying the freshest and most varied seafood and excellent South African wines.

Johannesburg is the largest city in South Africa. And very green: there are 10 million trees. The city is known for its restaurants, its shopping, and Africa’s largest airport.

If you want, you can buy diamonds in Johannesburg, for which South Africa is world-famous.

Are we persuaded? Then we suggest you choose one of our tours