Grottammare is a town in the province of Ascoli Piceno in the Marche region. The town is located along the coast on the slopes of the surrounding hills, where there is an ancient medieval village, which is part of the most beautiful villages in Italy, and, not to be missed, its beach is marked with the Blue Flag. Grottammare has a very ancient origin, even traces of the necropolis of Piceno have been found in its territory. It is pleasant to get lost among its narrow streets, they are laid out in rows and are characterized by buildings that have undergone careful restoration and careful redevelopment.

Church of Santa Lucia. It was built at the behest of Pope Sixtus V, Felice Peretti, who was born on December 13, the feast day of Saint Lucia. It is located in the immediate vicinity of his birthplace and the Orange Theater. The church has an imposing architectural structure with a facade reminiscent of the view of the old waterfront. Its style can be described as restrained and simple, inspired by the principles of Tridentine architecture. Above the portal we can see the papal coat of arms of Sixtus V, that is, an unbridled lion holding a pear branch, topped with the papal symbols of the crossed keys and the tiara. 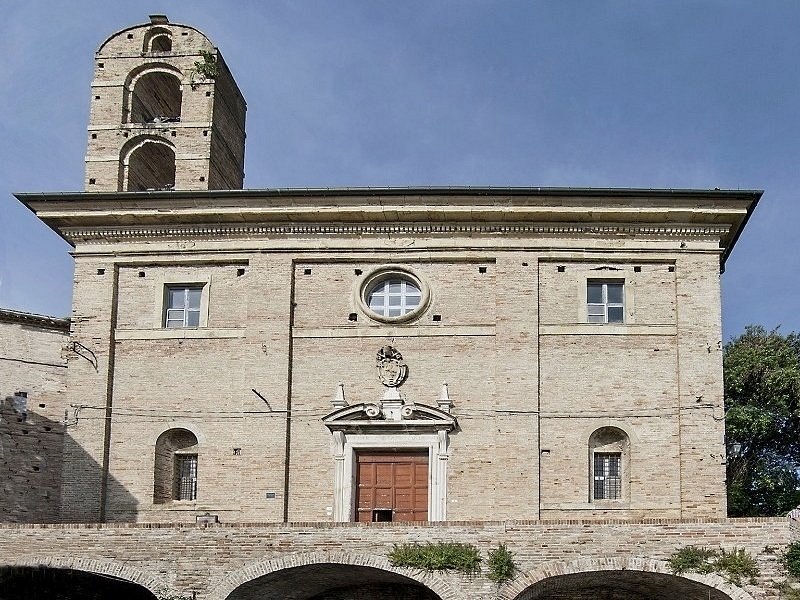 Church of San Giovanni Battista. Stepping out into the narrow streets of the village, you will stumble upon this church, which houses the Sistine Museum with objects bequeathed by the Pope to his country of origin. One of these is the liturgical cup, the most important work, which is kept in the reliquary at the end of the nave. On the work you can read ” F. FELIX PERETTVS DE MAEP.S.AGAT .”, from which we understand that it is an object belonging to the years when the prelate held the bishopric of Sant’Agata dei Goti.

READ
When to have a long-awaited holiday in Montenegro 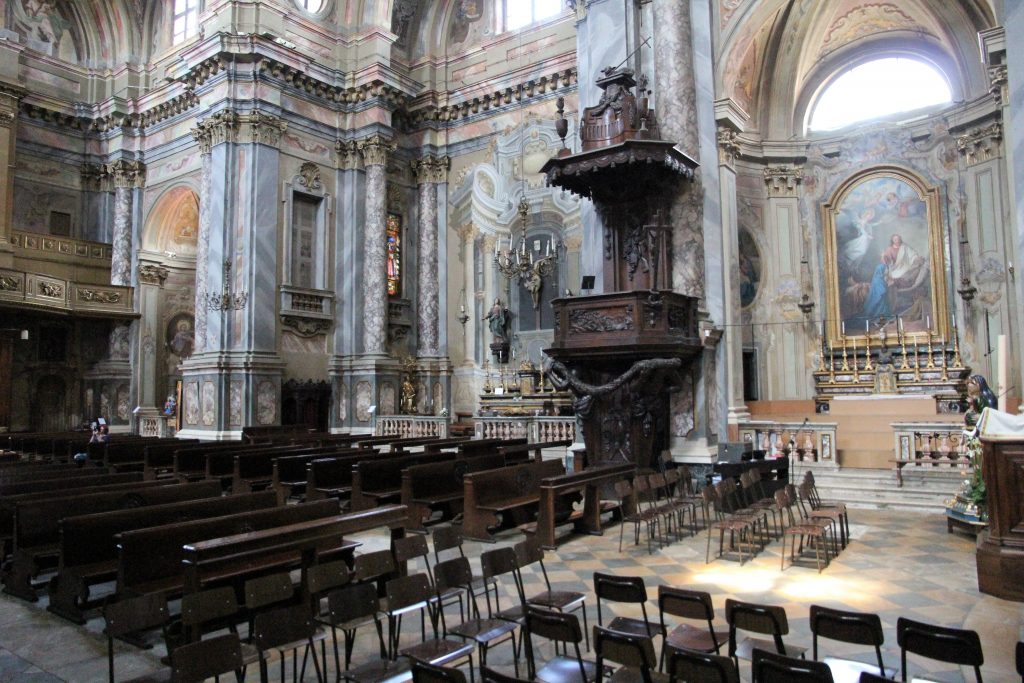 Teatro del Arancio. This theater dates back to the eighteenth century and it is in the niche of the facade you can see the statue of Pope Sixtus V, created in 1794 by a Swiss sculptor, under the statue you can read ” SISTO V POM CIVI MUNIFCENTISSIMO “, an inscription that stresses the connection between the Pope and his homeland. The theater owes its name to the lush plant that was located in the center of the square in front of the house, Piazza Peretti, and was guarded by a representative of the municipality, annually chosen among the families of the city, who as compensation received exemption from the municipal tax, this tax on domestic fires. From this area of Grottammare you can admire a spectacular view of the sea. 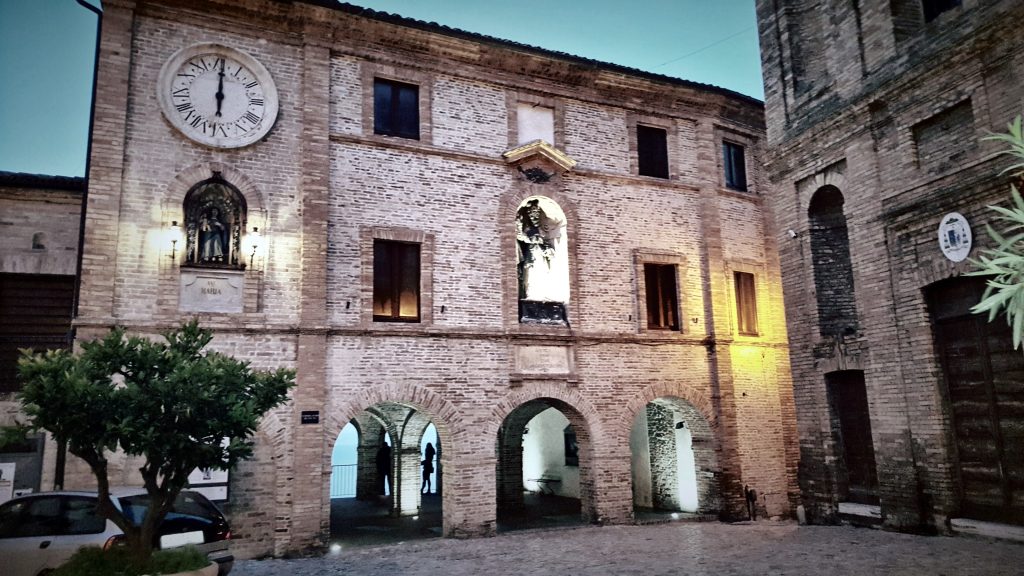 The Boy with the Seagulls. This bronze exhibition marks the beginning of the Fazziniano itinerary, which through various stages will lead to an introduction to the sculptor Pericle Fazzini, born May 4, 1913 in Grottammare. “The Boy with the Seagulls” is located along the bike and pedestrian path that connects Cuppa Marittima and Grottammare. But what is most striking about this point is the panorama to admire, especially during sunset, it is truly thought-provoking.

Metamorphosis. This is another exhibition of the Fazzini familiarity route, the sculpture is located in the center and is dedicated to John Fitzgerald Kennedy. It was personally required by his wife, who was passionate about art and books, was a student and a great admirer of the famous sculptor, whom she commissioned in 1964 to design a sculpture dedicated to the figure of her husband, who had been assassinated the year before. The First Lady visited the studio in person on February 2, 1966. Unfortunately, the work was never completed and Fazzini decided to donate it to the city of Grottammare, which since 1984 has placed it in the center of a square dedicated to him. In this bronze block, now recently restored, you can see the profile of the American president, placed in front of the sculpture in front of Corso Mazzini.

READ
Getting around Perugia, Italy

Church of Sant’Agostino. The church is located on the steep road leading from the marina to the ancient village. The structure of the church dates back to the sixteenth century and preserves a fresco of the Madonna della Misericordia by the artist Vincenzo Pagani. There is also a chipped bell tower, which, according to local tradition, was reduced in this way because the Augustinian monk Martin Luther hosted in the monastery attached to the church during his journey to Rome, before the great schism.

Via Cristoforo Colombo. A promenade for lovers of the Liberty style, it is the ideal place to admire buildings built between the nineteenth and twentieth centuries. Today the avenue features a porphyry floor of Carrara marble, the design of the floors continues the decorative tradition of the 1920s, and a series of palm trees makes the avenue cool and shady in the hot summers, it seems that the palm trees were brought from the Canary Islands in the first decades of the twentieth century. Typical villas that deserve a stop are Matricardi-Cola, built in 1913, and Kursaal, known as one of the most prestigious nightclubs on the entire Adriatic coast, today it houses the Museum of Comic Illustration.

The parish of San Pio V. The parish is in the center, here the Hungarian composer, pianist and organist Franz Liszt went to the masses and played a striking Callido organ for all those present, he was in Grottammare back in 1868. The typology of the facade is inspired by Roman churches, in particular Jacopo Barozzi, and the square in front is decorated with a fountain built by the architect Murri in 1875 and a bronze statue of Pope Sixtus V by the sculptor Aldo Sergiacomi. 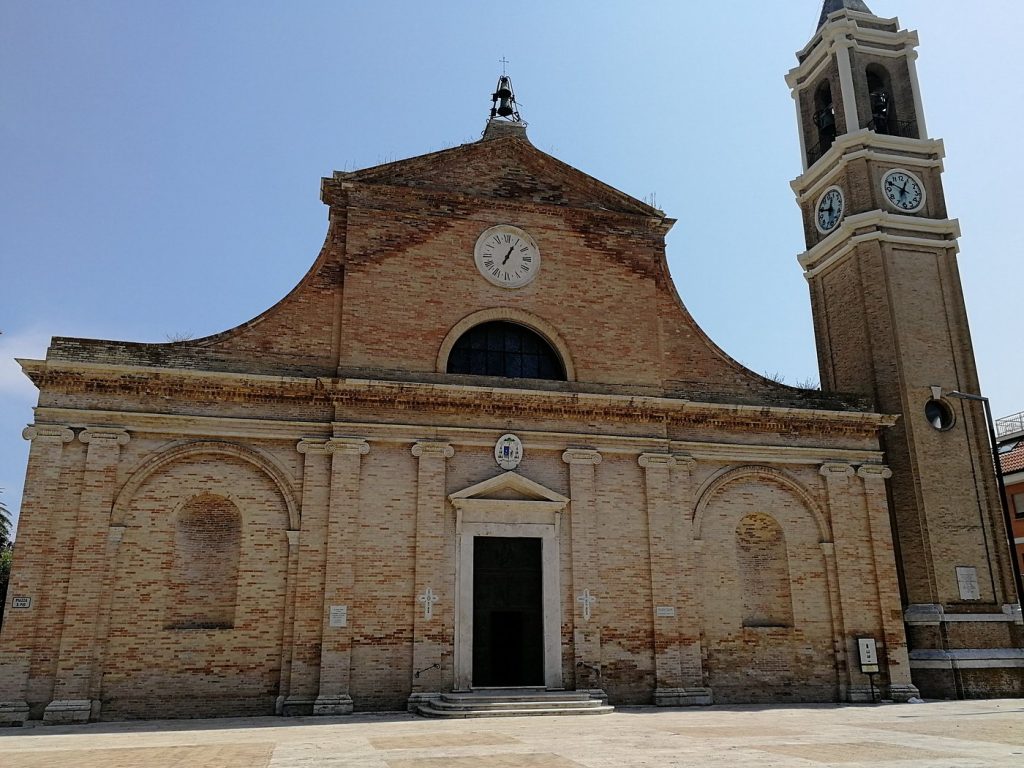 Museum of Comic Illustration. The museum has a permanent exhibition of comic-satirical drawings and comic strips with original works by some of the most famous Italian cartoonists and illustrators. The building where the museum is located today used to be a very famous discotheque, with about three hundred works, and the “Art of Humor” section is one of the most important and most famous, created with the cooperation and artistic direction of television. Graphic illustrators such as Manara, Liberatore, Echaurren, Matticcio, Ro Mercenaro, Sergio Staino and Chicard were invited there to present drawings dedicated to prestigious artists from the world of entertainment and culture. Over the years the review was dedicated to Toto, Massimo Troisi, in 1997 to Roberto Benigni, and in 1999 a tribute was paid to the singer and songwriter Fabrizio De Andre.

The museum Il Tarpato, dedicated to the works of the naive artist Giacomo Pomili, known as “Il Tarpato”. Its creation represents the culmination of a difficult and tedious journey to restore the old cache, the museum actually completes the reconstruction and improvement of the monumental complex of Piazza Peretti. After being abandoned, it has returned to its splendor, renewed by culture. Inside the museum, you will discover the inspiration of Giacomo Pomili through five themed rooms dedicated to his debut works, painted legends, religious paintings, paintings dominated by female figures and landscapes.

2. An itinerary through Grottammare in one day

Starting from the ancient village of the town, in the morning you can have breakfast at La Cave Fleurie , and then stop at the two main churches of the town of Marche, namely the Church of Sant’Agostino and the Church of Santa Lucia. The only thing to pay attention to is the opening hours, they are not always open, you can take the opportunity to visit them inside during masses. Another stop worth making is Il Tarpato Museum, dedicated to the works of the artist Giacomo Pomili.

For lunch, stop at Borgo Antico , and then go down to the city center, in particular to the square dedicated to Fazzini, where you can see his work La Metamorfosi. A few steps away you can visit the parish of San Pio V and then continue to the promenade, Via Cristoforo Colombo with its free beach and then dedicate a visit to the beautiful and famous Museum of Comic Illustration. For dinner, you can visit Ciasch Restaurant, located on the beach.

Grottammare – what to see. Italy.

One of the most prestigious resorts in Italy on the Adriatic Sea is considered Grottammare. It is a small town surrounded by palm and orange groves to the north, west and south. To the east of the town is the Adriatic Sea. It is from behind the horizon of the latter that the sun rises every day. 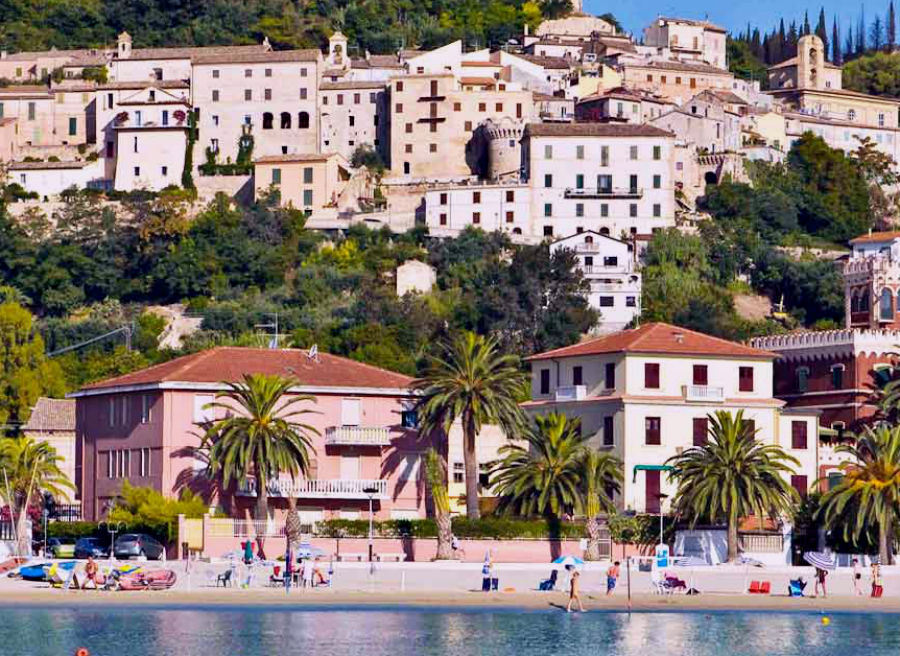 In terms of what to see in Grottammare, there are several popular places. The city is divided into two parts – Old and New. Its old part is located on a hill of 120 meters high. The new town grew accordingly at its foot. 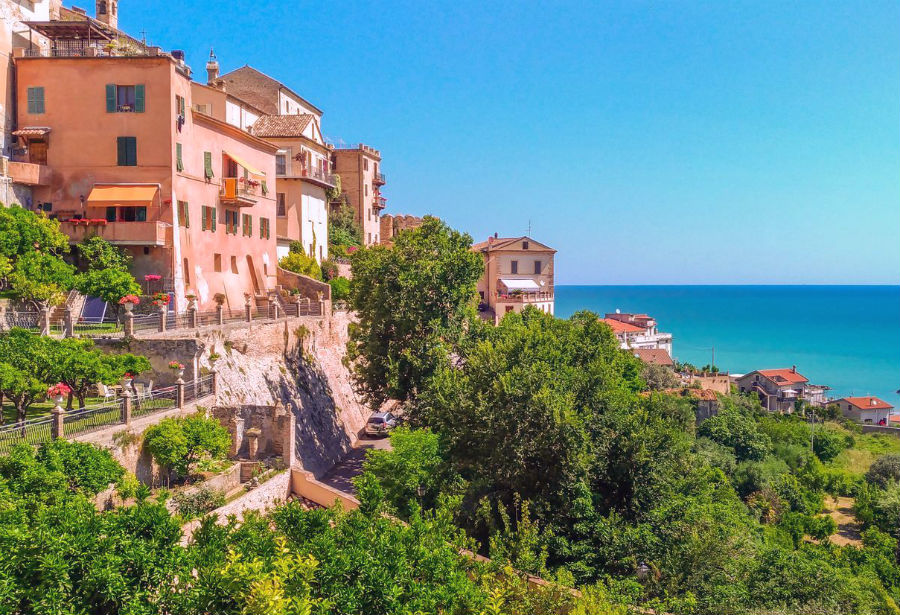 It is clear that the main attractions of Grottammare are located in and around its historic center. The most popular of these include the Laureati Palace, the castle and the Sistine Museum. 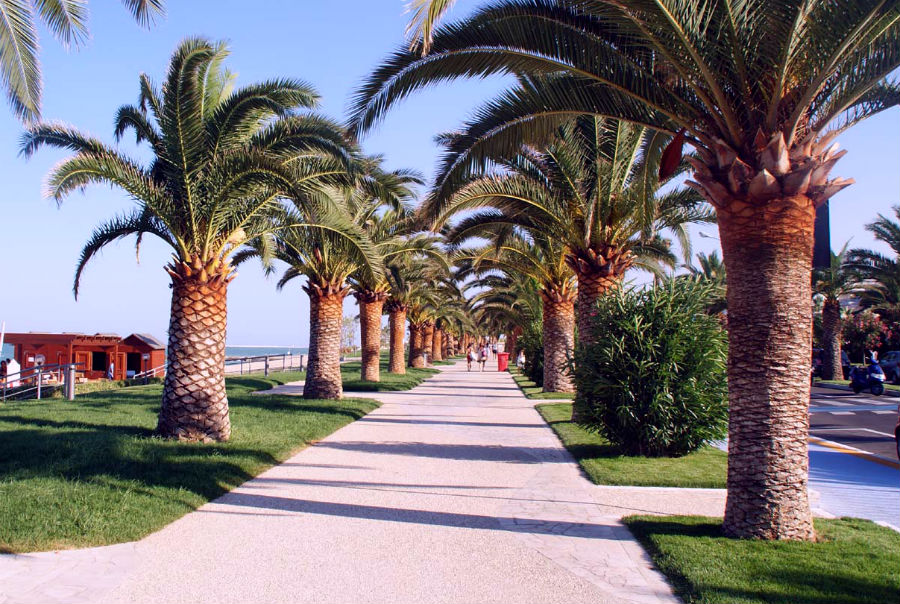 The Laureati Palace was built in 1786 by Bishop Bartolomeo Bacher. Its architecture shows asceticism, symmetry and small decorative details. In 1807 the building was sold to the Laureati family. These owners made some changes to the appearance of the palace and gave it their name. 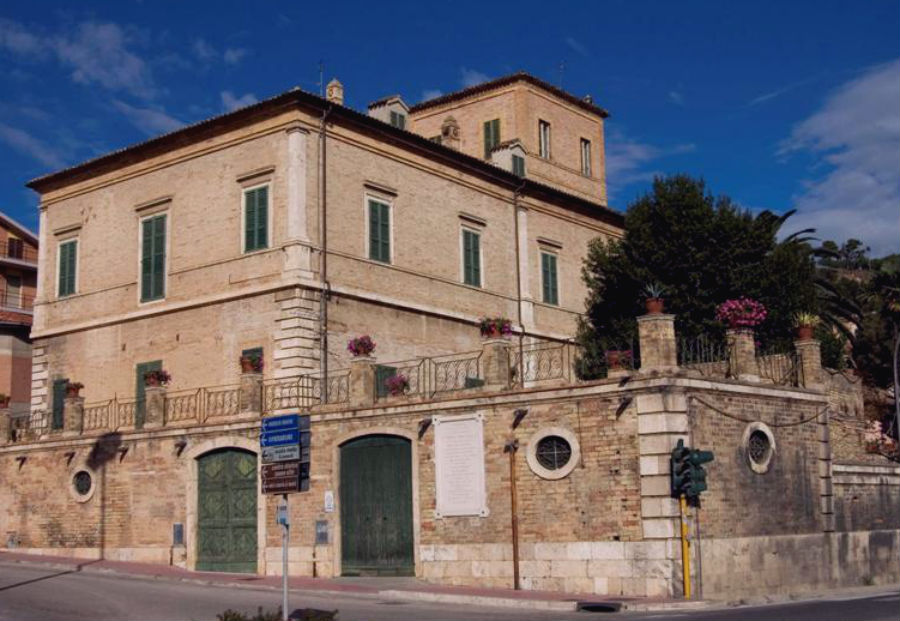 In the 19th century, among the guests of the family were the king Vittorio Emanuele II and the composer-pianist Franz Liszt. And in 1877 the famous cellist of his time, Giulio Laureati, was born here. 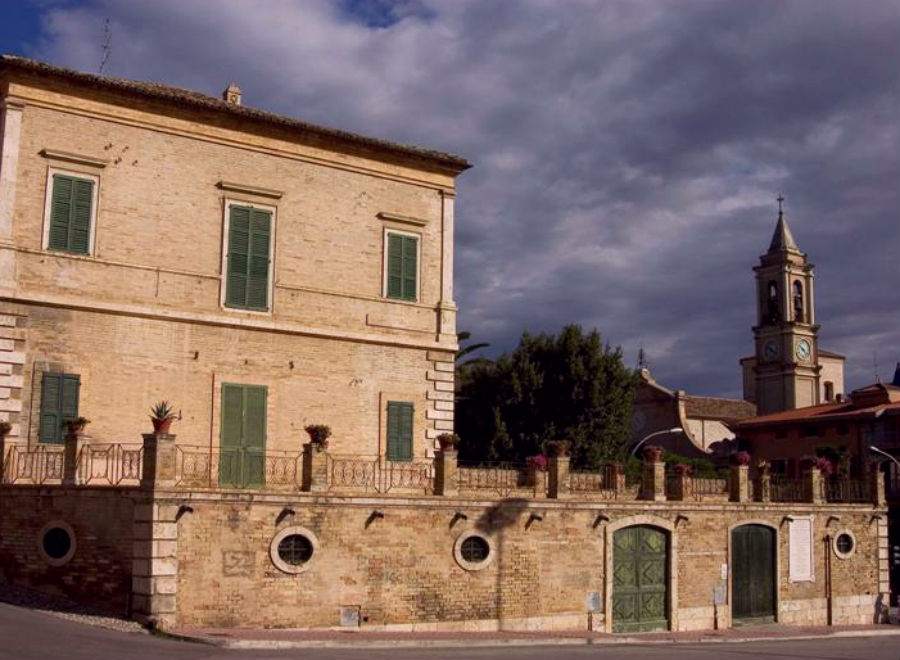 Grottammare was founded in the 8th-9th century. One of the walls of the castle dates back to this time of construction. The castle itself has been rebuilt several times. The last fortification changes were made in 16-17 centuries. It was connected with frequent landings of Ottoman pirates on the Adriatic coast of Italy. 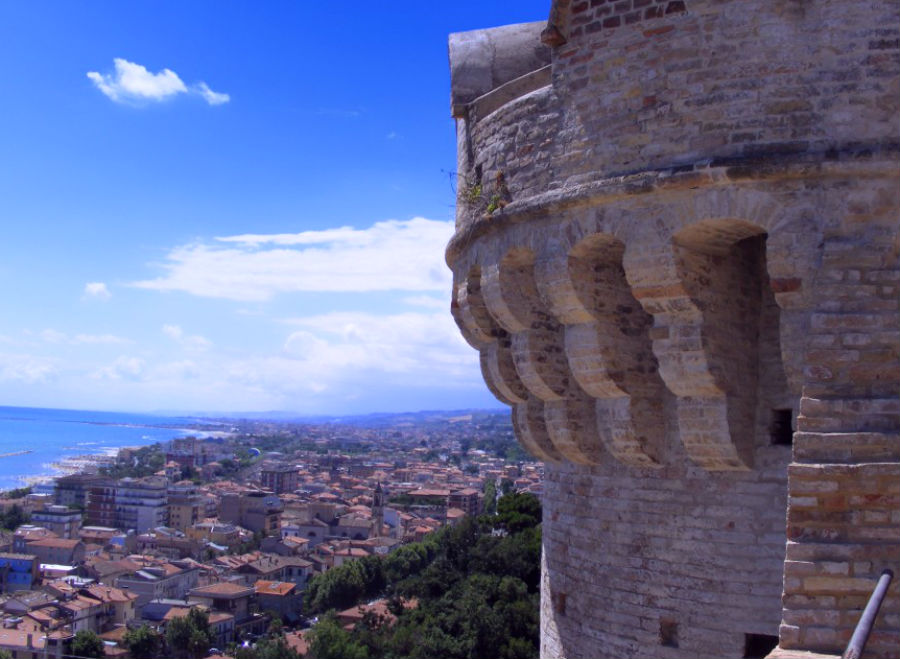 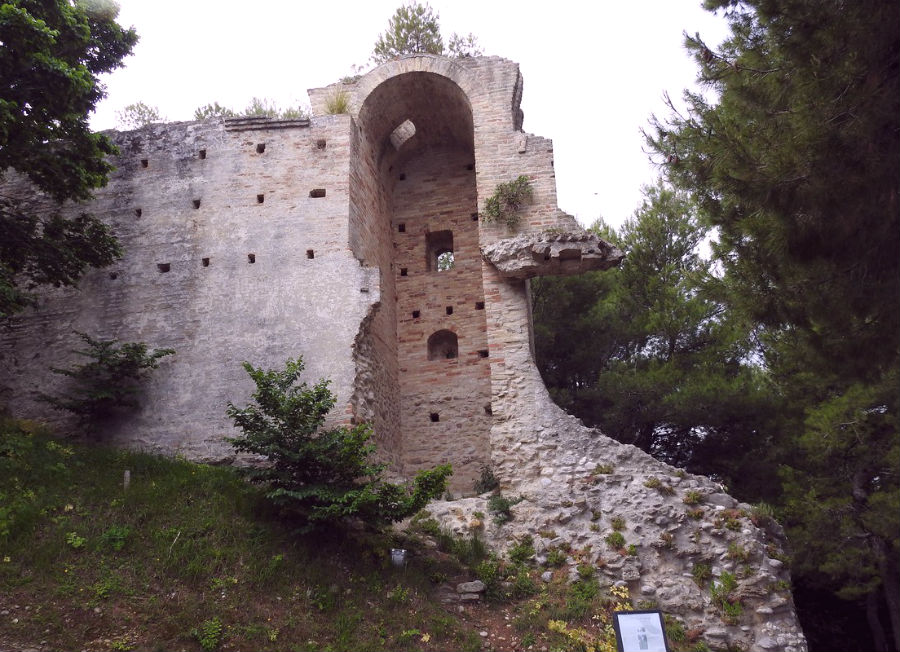 The Museum of Ecclesiastical Art, or the Sistine Museum, is housed in the Church of San Giovanni Battista. It contains works by artists and sculptors from the 16th and 19th centuries. Most of them have an ecclesiastical theme. The main exhibit of the collection, however, is the liturgical bowl. It was a gift from Pope Sixtus the Fifth, who was from Grottammare.

In addition to the above, it should be noted that Grottammare is on the list of the most beautiful small towns in Italy. It is also home to the Liszt music festival, the street artists and humor festivals and the Enogastronomic Fair. Under the latter is the art of matching a particular type of wine to a particular dish. 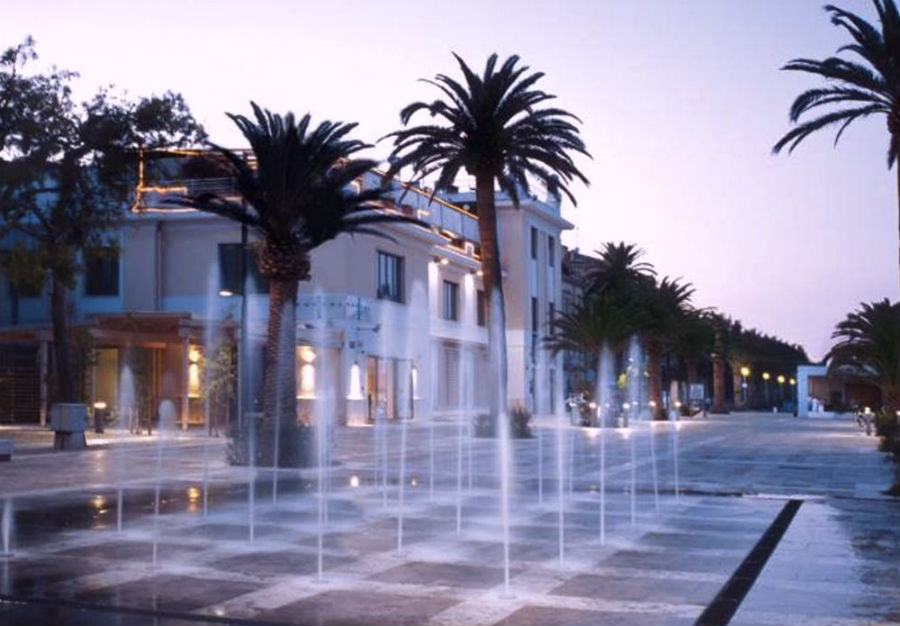 How to get there.

If someone wants to use public transportation, then here will be a priority for buses following in our direction. The fastest ones leave from the station Tiburtina. There are seven trips a day from 8.30 to 21.05 minutes. Travel time is 3 and a half hours. For more information click here.

Enter the name of the city in the address bar of the form below. Enter the dates of your desired check-in and click Search.