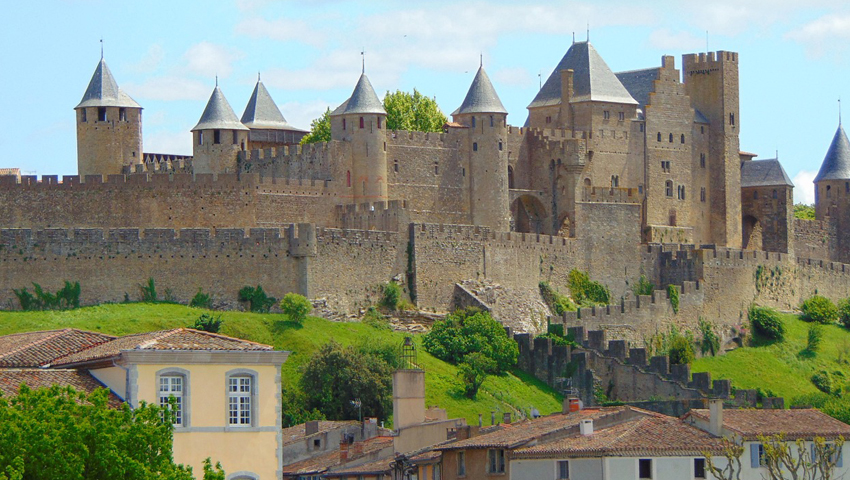 In the olden days, the best way to protect a city and its inhabitants was to fortify the settlement with walls. Walls were broken up by thick tall towers that completely surrounded the settlement, and then, over the centuries, as the danger gradually diminished and cities grew beyond their former boundaries, the walls also lost their function and became unnecessary. Today, European cities with relatively intact walls over a relatively long period of time are considered special.

For tourists looking for historic sites, below are some of the most beautiful fortress cities in France.

Among French cities protected by city walls, Carcassonne is the most famous, which is a rare example of fortified settlements in Europe. Fifty-six imposing towers were built into the huge double-row walls of the castle. Looking at the walls, it’s easy to get caught up in the world of medieval knights and almost wait for a knight in armor to appear from somewhere to rescue the princess imprisoned in the tower. But the real story of the walls is far more horrible than the fairy tale. One of the towers was used by the Catholic Inquisition in the 13th century, and today it houses exhibitions from the Museum of Torture, from which we can learn about the selective methods used here to torture prisoners. Nevertheless, Carcassonne has long left behind a dark past and today is a UNESCO World Heritage Site, rich in historical sights.

The architects’ masterpiece created here can only be seen from the air. King Louis Vauban, a military engineer of King Louis, designed a star-shaped defense system in the 17th century which surrounded the settlement in three rows, following one another. The wall was mainly used for protection against Habsburg armies, and construction began in 1698. The work was completed in 1702, and for the next 40 years the construction of the city continued within the walls. And soon Neuf-Brisach was attacked, namely in 1870 by the Prussians. The city’s walls and settlement were also badly damaged during World War II, but reconstruction soon began. The unusually shaped, elaborate defense system is the city’s most interesting attraction, which constantly attracts historians and architects.

Saint-Malo, an old port city at the mouth of the Rance River, was built on an island in the 12th century. The island was controlled by a group of pirates who levied taxes on every sailor who crossed the river. At the height of their power, the pirates proclaimed Saint-Malo an independent republic. As the settlement grew, it needed more protection, at which time walls were erected and in the 14th century a castle was built at the northern end of the island. It was later rebuilt several times, expanded with towers and bastions, and the culmination of the fortification of Saint-Malo came in the 17th century. It became increasingly apparent that the thriving settlement was no longer just a great target for pirates, but increasingly threatened by enemy troops. In the 1690s, engineer Sébastien Le Pretre de Vauban designed a system of defense so that it could withstand bombardment. It was then that three forts were erected on the cliffs, and a garrison building and barracks were built. And during World War II, St. Malo was practically destroyed, but much of its fortress survived and can be seen almost in its original form after restoration. Saint-Malo is today the most popular town in Brittany.

Among the fortified French settlements of Domme, it is the smallest on the banks of the Dordogne River with a population of only 1000. The village sits on top of a hill with fantastic views. Some of Domme’s original walls and bastions are still visible, as are the three surviving city gates, of which Porte de Tours, with its round towers, is perhaps the most impressive. The tower is open all year round to visitors, who can see in it the prison where the Templars were imprisoned in 1307. The walls of the cells still bear crosses carved in stone by the prisoners during their imprisonment. House, recognized as one of the most beautiful settlements in France.

I am the author of many articles on this site and a travel blogger. In 2011, I quit my corporate job and started traveling. I have been to 36 countries on 6 continents and do not want to stop anytime soon!