10 dishes to try in England 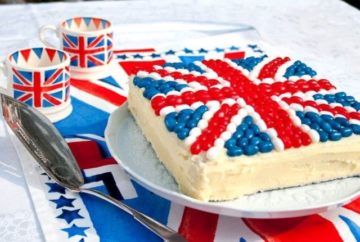 Tourists often limit themselves to eating at establishments that focus on the culinary traditions of other countries, and quickly conclude that the local cuisine is simple and lacks variety. However, the more curious traveler who wonders what food is worth trying in England is sure to discover quite a few famous and delicious national dishes.

Some of them may seem simple at first glance, but quite unusual on closer acquaintance. An interesting twist on modern England is the combination of conservative traditions with a vibrant Indian culture, which is reflected in the cuisine. 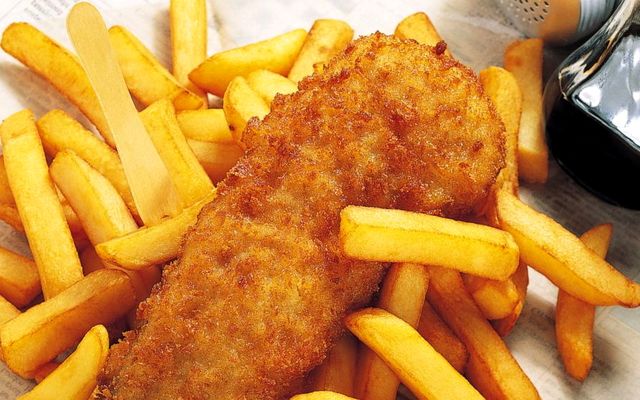 It is a typical meal found in every corner of the country, from budget cafes and pubs to posh restaurants. It is even called the unofficial national dish.

Fish and Chips was the first fast food item delivered to homes in England. It happened in 1935.

The famous dish is nothing more than fish and potatoes deep-fried in lard or vegetable oils. The peculiarity of cooking lies in the use of a special batter made with the addition of English beer or ale.

The traditional recipe features cod, but now the British often replace it with haddock, mint, halibut, and flounder. In some restaurants you can even try an unusual version of “fish-and-chips”, cooked to order, if you choose your favorite type of fish from the offered selection.

The first mention of this famous national dish dates back to the 19th century. That was the time when different variations of this rather traditional English pudding began to appear. Then it was not associated with a dessert dish, and was a typical English hearty meal for the common people. 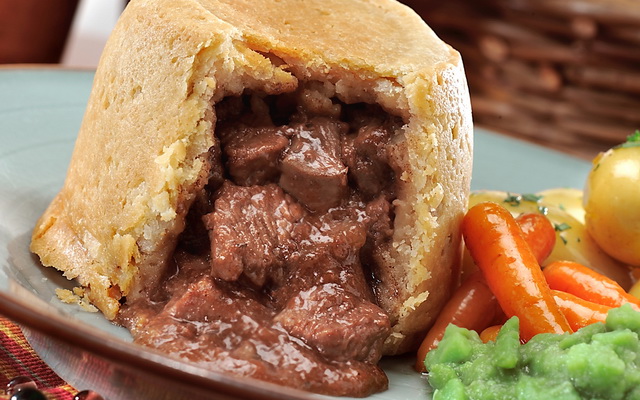 >>> Rent a car in Europe. Secrets of profitable rent, features and Lifehacks.

The famous in England Steak and kidney pudding is made from chopped beef chops and pieces of sheep or pork kidneys. The dough, based on kidney fat, is mixed with the meat ingredients, onions, and a small amount of bone broth. The dish is steamed for about 4 hours. Place mashed potatoes, vegetables and the pudding on a plate. The food is served hot.

This simple yet popular dish allows you to get an idea of the culinary preferences of ordinary Englishmen who lived a couple of centuries ago. 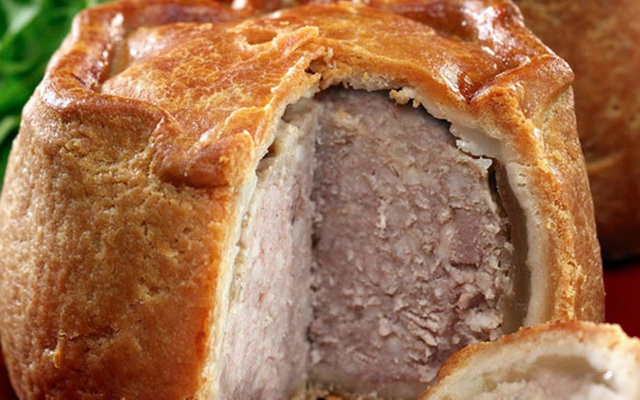 The dish is officially recognized as a culinary treasure of the region and is prepared according to a strictly defined recipe. There is even a special organization Melton Mowbray Pork Pie Association, which controls the production and distribution of this pie.

Before becoming one of the national dishes of England, Melton Mowbray pork pie was a typical meal in the diet of ordinary working people. This unusual pie reached the table of the nobility in the 18th century, after the nobles became hungry during the hunt and did not hesitate to try the servants’ food. Its nourishment and taste were appreciated, and with slight modifications the recipe for this famous pie has survived to this day.

The typical filling for Melton Mowbray pork is finely minced pork, which is then wrapped in a dough kneaded with water. The traditional pie is baked without the use of special molds and therefore turns out somewhat irregular and unsightly in appearance. It resembles an onion extended from the bottom.

Interestingly, to prepare this famous dish, the British take only the freshest and most natural pork meat, grown without adding antibiotics or artificial ingredients to the feed.

“Toad in the hole/ Sausage Toad

Despite the unusual name, frogs are not part of this typical English meal. It is not known precisely why the country began to call it by that name. Some even speculate that the curious name has to do with the kind of sausages that peek slightly out of the indentations in the dough. 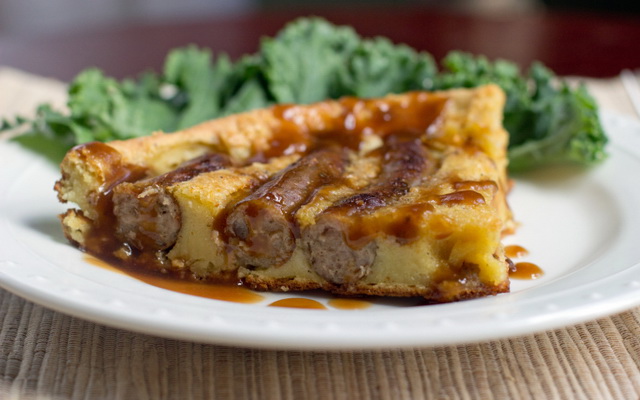 The first mention of this now-famous British dish dates back to the mid-18th century. At that time Toad in the hole was not made with sausages, but with meat, including whole hacked pigeons. One such unusual recipe was called “Pigeons in the hole.

Nowadays, Toad in the hole takes pork sausages and bakes them in a liquid batter made according to the recipe for Yorkshire pudding. The dish is puffy, light and quite tasty! It is served with vegetables and onion sauce. It is a typical English fare in the kitchen of any British housewife.

Kedgeree is one of those fancy English dishes with a history steeped in the tradition of Indian cooking. It is believed that it is based on kichari – a rice stew with vegetables and spices fried in oil – and was originally introduced in England. 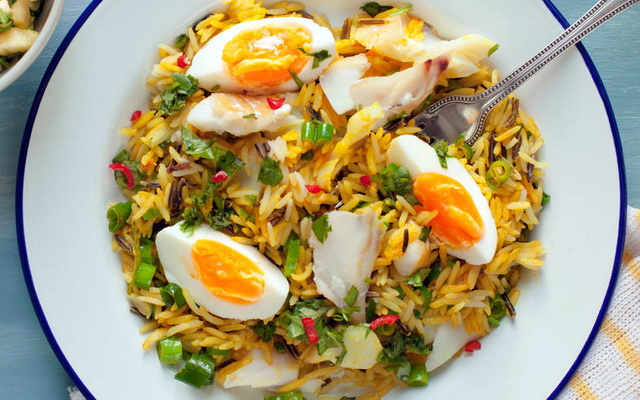 The originality of this dish, familiar to every Englishman, is in the way conservative British cuisine has modified the dish of a distant and alien culture so that it has become usual and familiar today.

The only things left of the original kichari in Kedgeree are rice, vegetables and spices. The English diversified the popular dish by adding pieces of cooked fish (usually haddock), parsley, hard-boiled eggs, cream and raisins.

There is still no generally accepted national recipe for Kedgeree, so in England you can try it with different kinds of fish (tuna, salmon) and vegetables. A typical Kedgeree is served most often hot, usually for breakfast or lunch.

As the name suggests, this traditional English food is made from a very unusual by-product. This famous oxtail soup is thought to have been created in the 17th century in London’s East End by people from France and Flanders. They used what ingredients they could financially afford to cook. 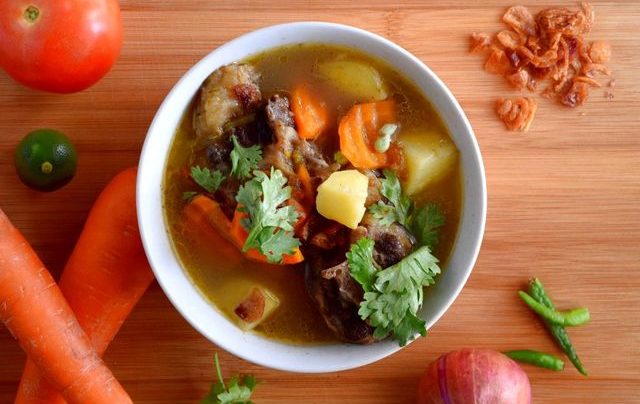 Cuisines around the world offer variations of Oxtail soup. It is prepared in Germany, Spain, Italy and other countries.

The process of preparing the popular soup usually begins a day before serving. The sliced tails are fried, then added to the vegetable broth and simmered for 3 hours. Then the pot is put in the fridge overnight to remove the solidified layer of fat in the morning. The next day, just before eating, the soup is reheated. Sometimes flour mixed with hot broth is added to thicken the soup. Sometimes there are variations of this recipe with sherry or wine.

Oxtail soup is a real classic of traditional English cuisine. It is quite rich and hearty and definitely worth a try. Today, the dish is so popular in England that it is available in cans and sold in almost every store.

“Chicken tikka masala” is perhaps the most popular dish in modern England and can be classified as a national treasure. There is still controversy about the true origin of this famous and popular food. Some claim that it originated in India, others believe that it was first tasted in Britain. Anyway, today this dish is extremely famous and popular not only among the British, but also among the inhabitants of other countries.

Chicken tikka masala is small pieces of chicken that are dipped into a masala sauce consisting of tomatoes, cream, curry, and other spices before being served. Prior to this, the chicken meat is marinated in spices and yogurt and then baked in a tandoor, a special roasting oven.

The food is served only hot. In some restaurants instead of the typical Chicken tikka masala you can try unusual varieties of this famous dish, cooked with lamb, fish or even paneer (Indian cheese).

For the English, Sunday roast is more than just a typical and well-known Sunday meal. It’s a tradition honored in the country since the 18th century, when people were devout, going to church services and gathering for a family meal afterwards. 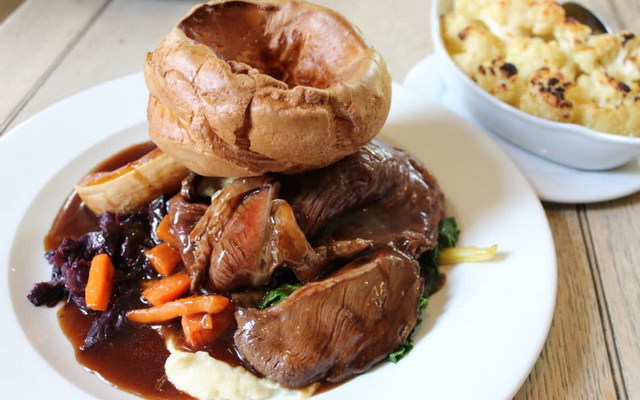 Sunday roast is a famous English dish that is served with several components at once. The main ingredient is roast meat, most often chicken or lamb, but beef, pork, duck, and turkey are also popular.

Baked potatoes or mashed potatoes and other cooked, baked or stewed vegetables (carrots, Brussels or cauliflower, green beans, peas) are served with the meat. Often the dish is supplemented with baked parsnips, mashed rutabaga or turnips.

But the most important ingredient of the traditional Sunday roast, without which there is no point in trying the dish, is the gravy, or, to put it simply, the gravy. The gravy is based on the juice that is secreted during baking. Also added to the gravy is a roast or finely chopped vegetables.

Depending on the choice of meat, vary the other components of the dish. For example, lamb is usually served with redcurrant sauce and jelly, beef is served with Yorkshire pudding and mustard, and chicken is served with sausage, cranberry and bread sauce.

Bubble and squeak with cabbage and potatoes

The literal translation of “Bubble and squeak” is quite amusing and may cause confusion. The unusual name of the English national dish can be explained by the fact that during cooking the cabbage water gurgles (bubbles) and “squeaking” sounds are made. 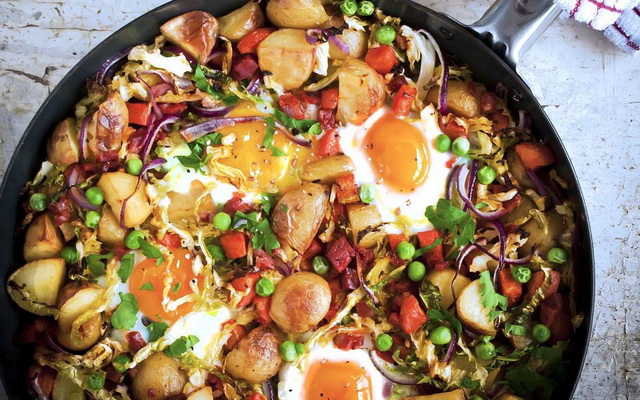 Bubble and squeak is a variation of a hearty Saturday breakfast. The main ingredient in this famous English meal is fried or boiled potatoes, which are wrapped in cold cooked cabbage leaves and then fried in a shallow dish.

Other typical ingredients could be cold meats, as well as green peas, Brussels sprouts, carrots, and other vegetables left over from traditional English roasts.

The unusual dish is seasoned with salt and pepper so that it ends up quite spicy. Amazing breakfast ideas, though, these English!

It’s hard to imagine traditional English cuisine without trifle, the world famous dessert. It is first mentioned in cookbooks as early as the 16th century! Since that time, the recipe of this now well-known and popular sweet has repeatedly changed and supplemented. 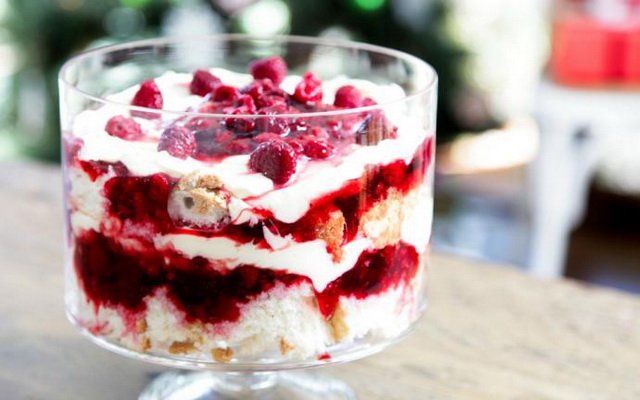 Originally, Trifle was a cream with sugar, ginger and rose water. Then to these ingredients the British began to add eggs, dough, jelly or fruit juice. In the modern version, the famous dessert is made in layers of biscuit (often soaked in alcohol), custard, whipped cream, jelly, fruit and berries (raspberries, strawberries, blueberries). A traditional English trifle is served in portions or a medium-sized dessert bowl. It is impossible to refuse from it!

Own variations of this popular dish exist in Scotland and in the Southern states of the United States. In England, trifle is a traditional Christmas treat.

What else the English love to eat

If you set out to try all the most popular and typical dishes of English cuisine, you’ll soon realize how enormous a task this is! 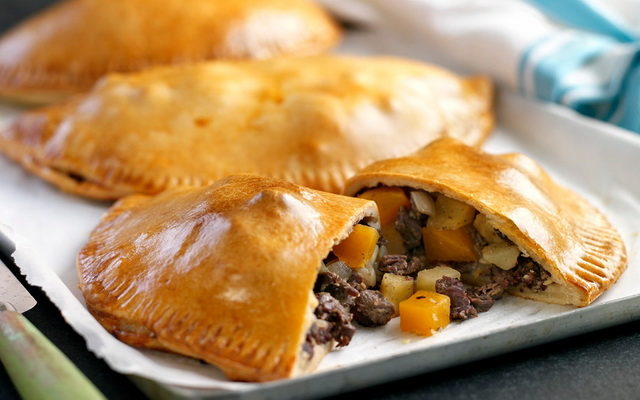 So, you definitely have to give credit to such famous national viands as:

And this is not the whole list of unusual and delicious dishes invented by the English. In short, there is really something to try!